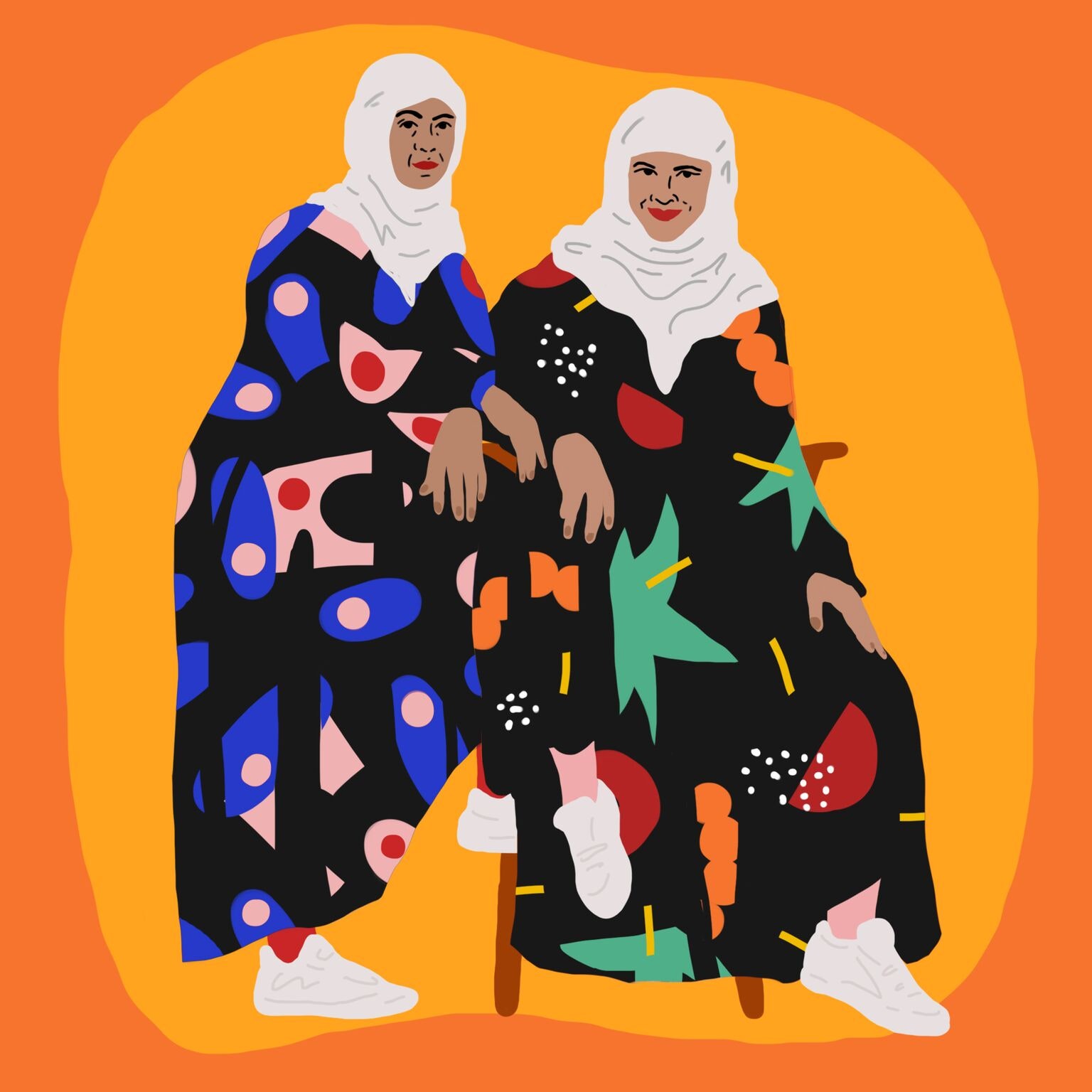 We were not always feminists. Growing up in a conservative Pakistani Muslim community in North London (Nadia), and on an assortment of Air Force bases all over India (Radhika), we were immersed in places where young girls stayed thin and quiet, making the world appear less burdensome and attractive. From birth, it seems, we were schooled on the importance of our roles, as wives and mothers, and how we would always be secondary to the ambitions and futures of men.

These gender norms were explicitly binary and unquestioned. Daddy brings home the bacon (or Halal beef, in Nadia’s case), and Mummy stays home and takes on every domestic duty there is. Even if she does work, her reason for living is to support her family — and never herself.

Fortunately, we were able to sidestep the inevitability of living like our mothers by redefining these roles for ourselves. Now we perform comedy routines intended to provoke and challenge the ideologies we were raised on. We speak up about how women can and should be in charge of their own destinies — Nadia with her solo show (1)and Radhika with her book (2) and her stand-up show “Older. Angrier. Hairier.” We have spoken on mainstream media addressing issues including Muslim modesty, women’s rights in India, and, of course, sex.

_Shugs & Fats,_ our comedy web series, is where our feminist voices came together. It’s a show about two Hijabis forced to live with each other, and despite completely different worldviews — one is an entitled, optimistic millennial, the other a conservative old grump — they bond over their one common quest: to become “real Americans.”

This show is a massive fuck-you to the notion that women belong in the shadows. It’s our attempt at humanizing Muslim women, because that’s what they are. Humans. This is a show about “oppressed women” leading the way.

We haven’t always been feminists, but now that we are, we have become loudspeakers for our newfound beliefs, and we rant and rave about our journey into the #thefutureisfemale light at any given opportunity — which is why we are so excited to share our story.

**Nadia Manzoor:** From day one, my twin brother was reared for world domination, while I was not meant to get fat! We had vastly different rules. If I were to date before marriage, or show my skin in public, there would be severe consequences: disownment, and essentially extrication from “the tribe.” Sadly, for some women this can mean death. Of course, honor killings are the extreme, but it’s a result of the same ideology, that a woman’s place is at home, maintaining the honor of her family. In fact, the very last place I was ever meant to be was on a stage, telling my story and making jokes. The only stage I was meant to be on was my wedding stage.

**Radhika Vaz:** The only thing India seems to have going for itself right now is that it isn’t Pakistan! Although, our sex-selective abortions are so commonplace that the government had to launch a campaign called “Save the girl child” — PLEASE STOP KILLING GIRLS is basically what it means! As a woman in India, you do feel like you need a man’s permission and protection to accomplish anything. And to, you know, be alive!

**Nadia:** Also, there weren’t any cultural role models that exemplified a new way. I grew up with women who seemed to be fully accepting of the status quo. The few times that a quirky auntie appeared, with short hair and a career-based manifesto, I was told to stay away from her — God forbid they would teach me that a woman is capable of not being dependent on a man!

**Radhika:** I was fifteen when my _Bharatnatyam_ dance teacher told me _not_ to get married. She was in her 50s, single, and doing what she loved. However, she lived in a house that her brother — the only supportive family member — had given her. And I remember thinking, _Wait a minute,_ _if I don’t get married, where in fuck’s name would I live?_ I didn’t have a brother. I also didn’t have a prototype of the middle-class working girl.

**Nadia:** We don’t come from a history of outspoken female voices, especially not in comedy. I think this is why there is a different degree of risk in what we do — being South Asian female comedians is still very revolutionary — because for the most part women don’t expose themselves. There’s a very big risk in that, the risk of bringing shame on our families, and fear of how our communities are going to respond.

**Radhika:** Never mind comedy — look at Malala, she literally took a bullet because she wanted to go to school.

**Nadia:** And last year, Qandeel Baloch, who was dubbed “Pakistan’s Kim Kardashian” because she took bikini selfies and had a thriving Instagram account, was killed by her brother — for her open expression of sexuality.

**Radhika:** Now I’m relieved I don’t have a bloody brother.

**Nadia:** I know! Last year, I had to cancel my one-woman show in Pakistan simply because we couldn’t trust whether or not I would be safe.

**Radhika:** Very recently in Bangalore, a fairly progressive city in India, women on a very busy road suffered a violent and hateful mass sexual assault. Why? Because they dared to be out at night celebrating New Year’s Eve, dressed as they pleased. The message seemed to be: if you are a woman with a mind of your own, you will be groped.

**Nadia:** Before moving to the U.S., I didn’t have the understanding to identify as a feminist. I was in Boston studying social work and policy, working in domestic-violence shelters, and I became obsessed with the anti-porn movement. Now I had ways to understand and express my frustration at basically being sexually objectified my whole life and told to cover up so as to not tempt men! It was then that I became committed to women’s rights.

**Radhika:** I realized I was a feminist after I wrote my first one-woman show. Until then I hadn’t articulated how deeply I felt the gender disparity. I owe a lot to improv and performing — and so do you, because that is how you met me, your icon.

> We want to play with people’s perspectives about who we all are under the cultural garb that superficially defines us.

**Nadia:** You know what I mean — I hadn’t seen anyone like you because there are so few of us. That’s why it was so easy to work together, because we had this shared experience of South Asian sexism, and we wanted to make comedy out of it.

**Radhika:** Totally! Before _Shugs & Fats,_ I would go on these awful auditions for the weeping mum of a terrorist, and all I kept thinking is, _These women are so much more!_ The roles had no dimension, and they portrayed women from the culture as subservient to men, secondary to their children, and ignorant of all matters outside the home. Where are the funny, smart, subversive hijabis? So in the end, we just wrote them ourselves.

**Radhika:** We want to play with people’s perspectives about who we all are under the cultural garb that superficially defines us. What do we see when hijabis are walking down the street? What do we think we know about them?

**Nadia:** Unfortunately, the timing of this show couldn’t be better. With Trump, we are all fearful of increasing hate toward marginalized communities — which is why we feel the urgency to depict diverse characters that are rarely seen on TV.

**Nadia:** That’s because Muslim women are depicted, for the most part, as victims, hiding in the shadows and not determining their own lives. Of course, in some cases that can be true, but otherwise Muslims are normal. They shit and they shave, and they worry about what other people are going to think of them.

**Radhika:** Nothing makes me laugh more than these two characters, and, being comedians, we always try to go for broke, not have any boundaries and all that. But given we are dealing with a particular community, we did feel a responsibility to be sensitive.

**Nadia:** For sure — you have to tread lightly. We don’t want to encourage the Islamophobes, but we want to shed light on our experiences and reflect on the traditions that have shaped us, while also being respectful of them.

**Radhika:** But be really funny while doing that.