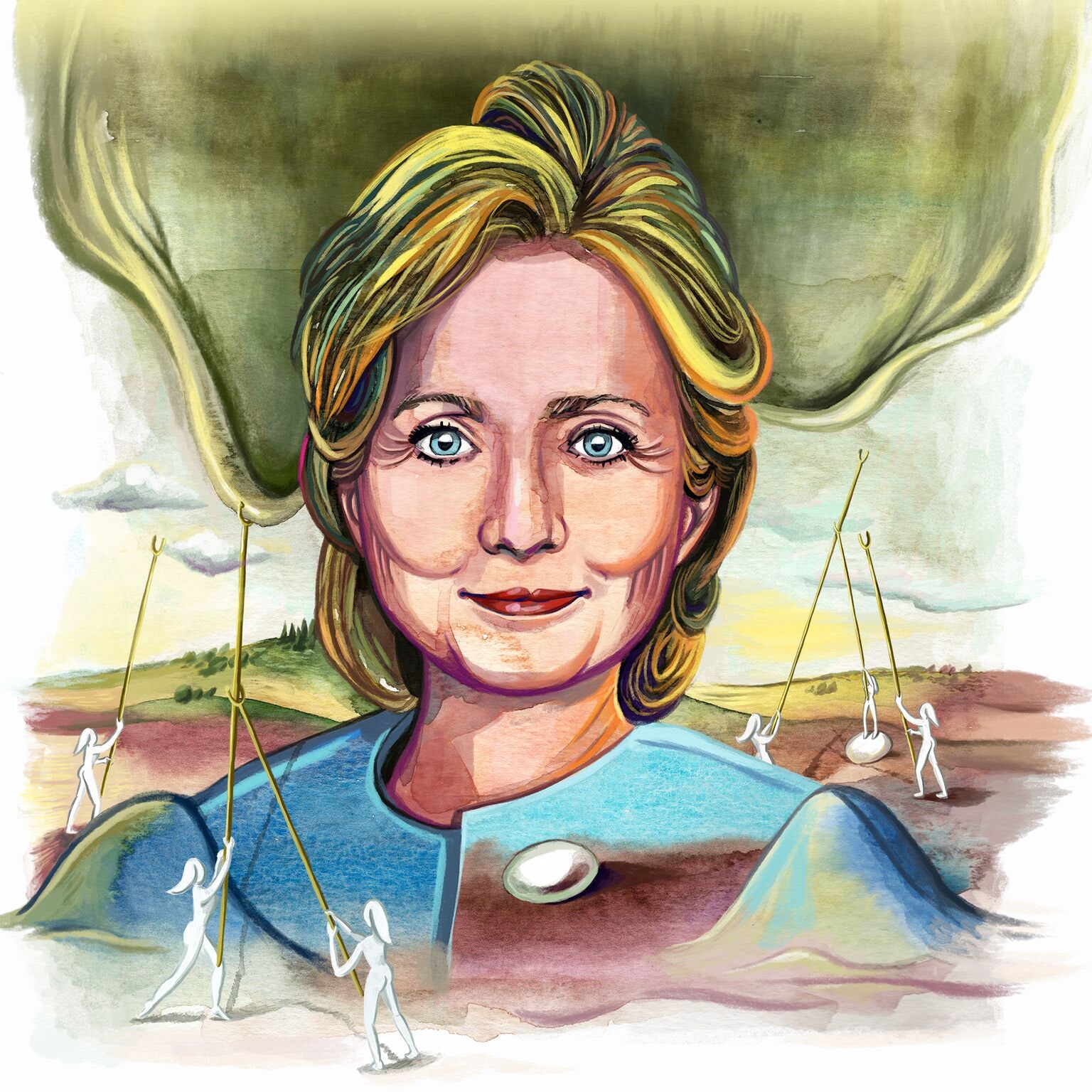 When we launched (1), we were excited, of course. Iconic female politician, soon to be the Democratic presidential nominee, sitting down with us to kick off our little newsletter? Yes, please! It made us feel official, powerful, like we were really in the room where it happens! But I can also say that everyone who was there that day, from our Lenny staff to our video crew, walked away both impressed and moved by Secretary Clinton’s careful attention. Not just to us as people, but also to the policies she is committed to enacting. Despite being on the verge of losing her voice after weeks of travel, she spoke with that signature welcoming boom, laughing heartily and causing the room to burst into applause when she responded that yes, indeed, she is a feminist.

Below are some previously unpublished excerpts from our conversation, where she discusses the lack of support we give to working mothers and how politics has a place for millennial women. We loved her that day, and after the past year we have respect for her resolve and tenacity on a level we could not have imagined. As the results of today’s election flood in, and we hope for this amazing milestone to be achieved, I will let her words below comfort me: “Whenever I’m talking to young women about politics, I always say, ‘Look. You don’t have to run for office. You don’t even have to be actively involved. But you do have to exercise your brain in deciding what you believe and whom you will support.'”

**LD:** And I’m sure many women ask you that themselves. What do you say to those women?

**HRC:** I say: It’s a set of questions everybody, if they’re honest, has to admit they struggle with. And there is no one size fits all. But I think there are some guidelines that people can look to. One of the things to be really sure of when you have children is how much help you’re going to get from your spouse or your partner, and how much help you’re going to get from the rest of your family. It’s not easy under any circumstances to become a new mother. Everybody who’s been through it knows that.

You need help. You need people you can count on. Too many women don’t have that support system. Or they don’t ask for help, because they think they’re supposed to be able to do it all themselves, or they unfortunately don’t have anybody in their lives who’s going to actually chip in and do what they can do. So I think it’s important that you are honest about what your own limitations are, what you think you can do, and how much help you need to be able to do it.

I also think we do a pretty lousy job in our country of supporting women in work. It’s hard to be living that double life experience where you have family responsibilities. Maybe it’s a marriage and children, or maybe it’s caring for an elderly relative. Everybody has something that they are called upon to try to deal with. And we just make it about as hard as we can in the entire world, as far as I’m concerned. We basically say to young women, “Well, go make these decisions, and then you’re basically on your own.” And I think that’s short-sighted and counterproductive.

Because I want young women to realize they’ve got a lifespan where they can do so much. I have friends who had their first child at 18, or their first child at 45. It’s one of the joys of being a woman in America today. You don’t have to have a cookie-cutter progression. You can explore, you can try on different roles, you can push yourself, you can retreat back — whatever you want to do to define your life journey. And it doesn’t have to be the journey of your mother or your friends. It can be your journey.

One of the biggest problems I see is young women who, they have an idea, maybe a dream, but they don’t know how to organize themselves well enough to go step one, step two, step three. And that’s where I think we could do a lot more to help. Peer-group advice, where people can say, “OK, sit down and really ask yourself honestly: Is this something you just want to do, or is this your passion to do it? If it’s your passion, what do you need to learn to be able to actually achieve that?”

**LD:** You know, our typical Lenny reader is a woman in her 20s or 30s who is passionate about politics, but has often felt disenfranchised by the political process, and like there wasn’t space for her voice to be heard. And I wondered what issues you would tell young women to focus on today, and how you would convince them that their voice, their vote, can actually make a difference in a climate that can seem so cold.

**HRC:** It can seem cold. It can seem hostile. It can seem mean. All of that. I’m not sure it’s ever been any different, but now it’s played out on the global stage, and literally second by second we can follow what is or isn’t happening.

I would say a couple of things. First, a lot of young women I know already have passions, but they don’t necessarily relate them to politics. So they may be passionate, for example, about young kids learning. If they aren’t teachers, maybe they’re tutoring in an after-school program. They really care about that. But they often don’t make the connection that political decisions will impact many more kids than those kids they can personally reach. Or somebody’s passionate about the environment, and passionate about climate change, but they think politics is just hopeless and useless. But if we don’t get national plans enacted, and international plans as well, we’re not going to make the progress we need to make.

So whenever I’m talking to young women about politics, I always say: “Look. You don’t have to run for office. You don’t even have to be actively involved. But you do have to exercise your brain in deciding what you believe and whom you will support.” And sometimes it is choices between people, none of whom excite you, but studied enough to figure out, _OK, if I vote for this person over that person, I’m more likely to see progress on something I care about._

I think politics is also a great learning experience. I often urge young women to volunteer in a campaign. Just go door to door. Meet your neighbors and say, “Hey, I’m here canvassing for this cause or this candidate.” You will learn about yourself, and you’ll learn about other people. And I think that’s always to your benefit, because every bit of that learning adds up so that you can make better decisions for yourself.

And if you can think about it that way, you don’t get turned off by the negativity and the nastiness that is unfortunately too much in our politics today. You can cut through that and say, “Look, I not only have a right, I have an obligation to make a choice. It’s part of the service I pay for living in our country.”

_Lena Dunham is excited to show her children her simply astounding collection of Hillary 2016 merchandise._