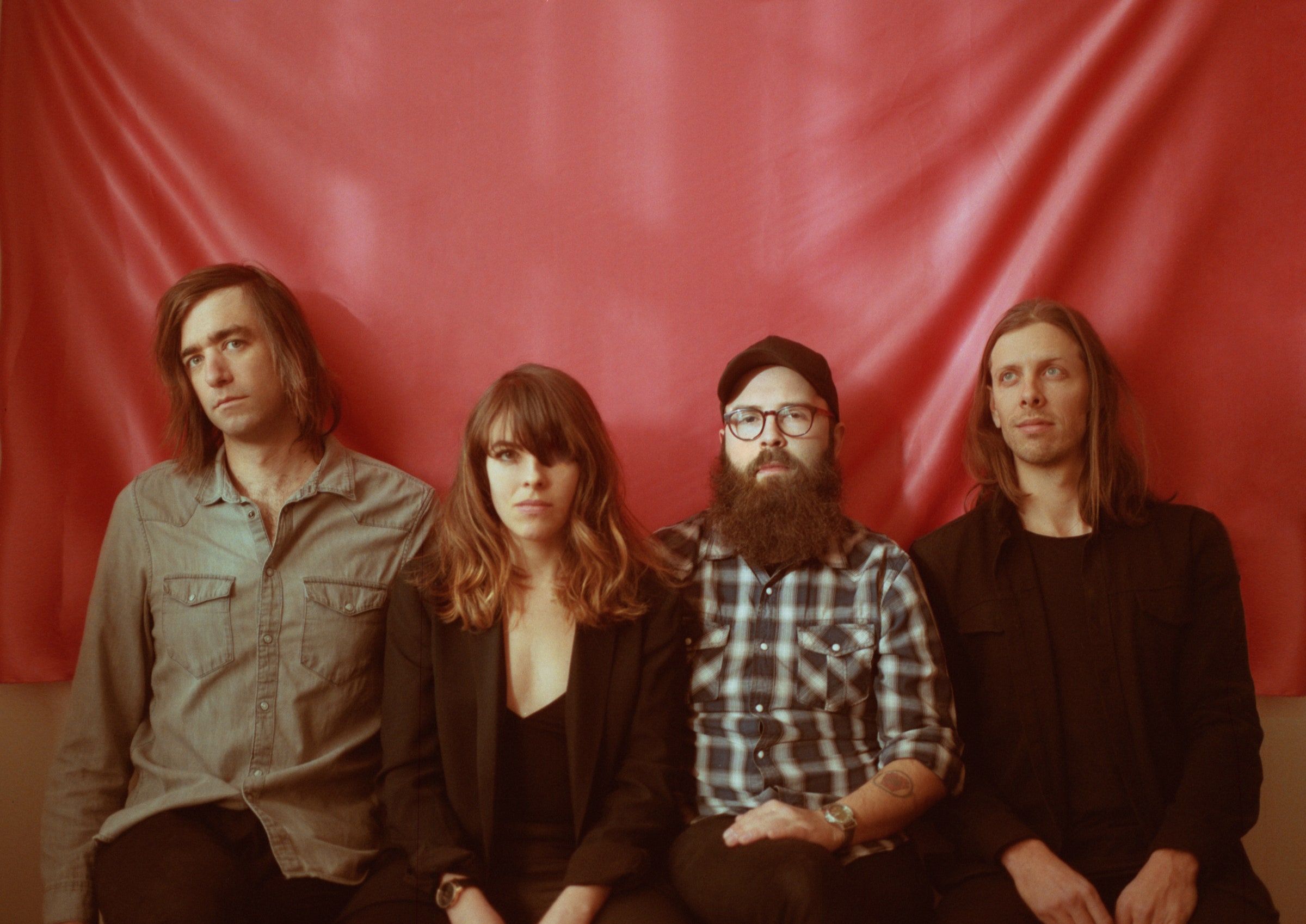 The artwork for Hop Along’s third album, *Bark Your Head Off, Dog*, released last Friday, is an original painting by the band’s frontwoman, Frances Quinlan. Like the artwork for the Philadelphia quartet’s 2012 debut, *Get Disowned*, it imagines a thicket of forest. On a couch in a Manhattan office earlier this year, I tell Quinlan I was reminded of Joni Mitchell (1) “a painter who writes songs” while admiring the cover. She remembers the quote, too, qualifying her own job description as “both a painter and a songwriter,” adding, “At this point, I’ve been more intensely writing than I have been painting.” As a writer, Quinlan frequently is intense.

Often concerned with power, Hop Along’s latest album showcases lyrics as barbed and inventive as ever. “That’s how you got your limp / All your strength came from her humiliation,” Quinlan sings on “How You Got Your Limp,” the song she says she wrote most quickly of the album’s nine tracks. While I often fear that being a woman means never being out of the woods, listening to *Bark Your Head Off, Dog*, I hear a case for making oneself into a credible threat to the predators lying in wait, making a home in the thicket and howling out.

For Lenny Letter, we discussed the band’s latest record, going to your limits, and what a woman (2) the “best voice in rock music today” thinks about legacy.

**Thora Siemsen:** I’ve read that the band uses studio time to coerce parts of the writing process. Can you talk a bit about your relationship with recording and the beginnings of creating a song?

**Frances Quinlan:** There’s such an urgency to recording in that there’s a finality to it. When you make a record, you’re hoping people will be interested, and you have to operate under the delusion that it will be great and you’ll get there. There’s all this struggle and pain to make it great, and then maybe you fail. It’s almost always a failure as far as making the thing you saw in your head. I give all that I’m aware of of myself to the thing that I am making, which makes it very upsetting and devastating sometimes, to go to your limits and see exactly where they are. It’s very humbling and sometimes embarrassing and difficult to see the beginning and end of your ability and knowledge. Of course, at the end of the day, you think about time you’ve wasted and how you could’ve gotten better.

**TS:** Are there times you feel you captured what you wanted exactly?

**FQ:** I honestly do feel that way about this record. When I think of other records, I’m not ashamed or regretful. I think we did exactly what we were capable of doing at that time. I remember focusing in on things that, in the end, didn’t really matter the way that they did to me at the time. That could certainly be said with aspects of this record as well, but my focus was stronger than it’s ever been, and our collective focus was stronger than it’s ever been. Those two things together made this record. I’m very, very proud of it and the band. It’s overwhelming in its own way to see it, and then there is this pressure of bringing the life of this record to the stage.

**TS:** Do you need to locate an emotional truth in a lyric to be able to sing it the way that you want to?

**FQ:** Absolutely. If I’m gonna be singing something for five-plus years, it better feel true. Of course, there’s nothing you can do about the experiences you gain that make certain things seem trivial later. Generally, a lot of what I write is from older pieces. Songwriting can be kind of a collage for me, unless the subject matter is very direct, such as “One That Suits Me.” I was thinking about World War I when I wrote that, for whatever reason. Every war is a nightmare, but it’s such a particularly fantastic nightmare, because they’re testing all of these weapons that they’d never used before. Scientists didn’t even know the effects gas would have, and they were taking it out in the field. It was so bad that soldiers on the same side would be getting hurt, because they would detonate gas by accident on themselves. It was such horrifying chaos. Everything else, I like to dig through lines that stick with me. I have finally learned to appreciate the necessity of editing.

**TS:** How do history and literature inform what you write about?

**FQ:** I consider reading practice now. A lot of the writers that I most appreciate had a lot of jobs, so a multitude of experiences to take from. A fear of mine is that I’ll have nothing to say pretty soon, because it’s very easy in any profession to fall into a routine. My day-to-day is not particularly exciting. Reading is a major escape from myself that feels constructive.

When I was younger, my favorite authors were all men, and I would just relate to the male protagonist. I would ignore the women characters, because usually they were very poorly written. Rather than thinking about why that was, I just ignored it and related to what I cared about. There’s all of this anger that’s in me from denying myself a certain mode of expression out of fear of how I would be categorized. I am only now becoming aware, as a woman, of how I have deferred to men all of my life for a sense of worth, a sense of false camaraderie that was never really there. I feel very grateful and relieved to finally talk about my experience as a woman. I’ve denied myself that for so long.

**TS:** What would you like your legacy in rock music to include?

**FQ:** I keep thinking about how many times in the course of human history people have been certain that the end was nigh. There’s plenty of articles coming about regarding the irreversible changes that the planet is going through and wondering how things will be for human beings in 50 years. It’s a funny thing to me, thinking about how long art really will last. Also, the fact that art does nothing to rescue the body from dying. Legacy is after death. It’s a funny thing to worry about that when we’ll never know how that feels. I don’t have the kind of foresight to really even think of my legacy. I do hope to have an interesting life. I hope that songwriting will carry me through an interesting life of meeting all sorts of people and having new experiences to write about. Maybe I’ll finally stop writing about childhood, but I don’t know if I ever will. It’s hard to get away from, and I had a pretty good childhood. So, we’ll see.

*Thora Siemsen is a regular contributor to Lenny Letter. Find more of her work (3).*