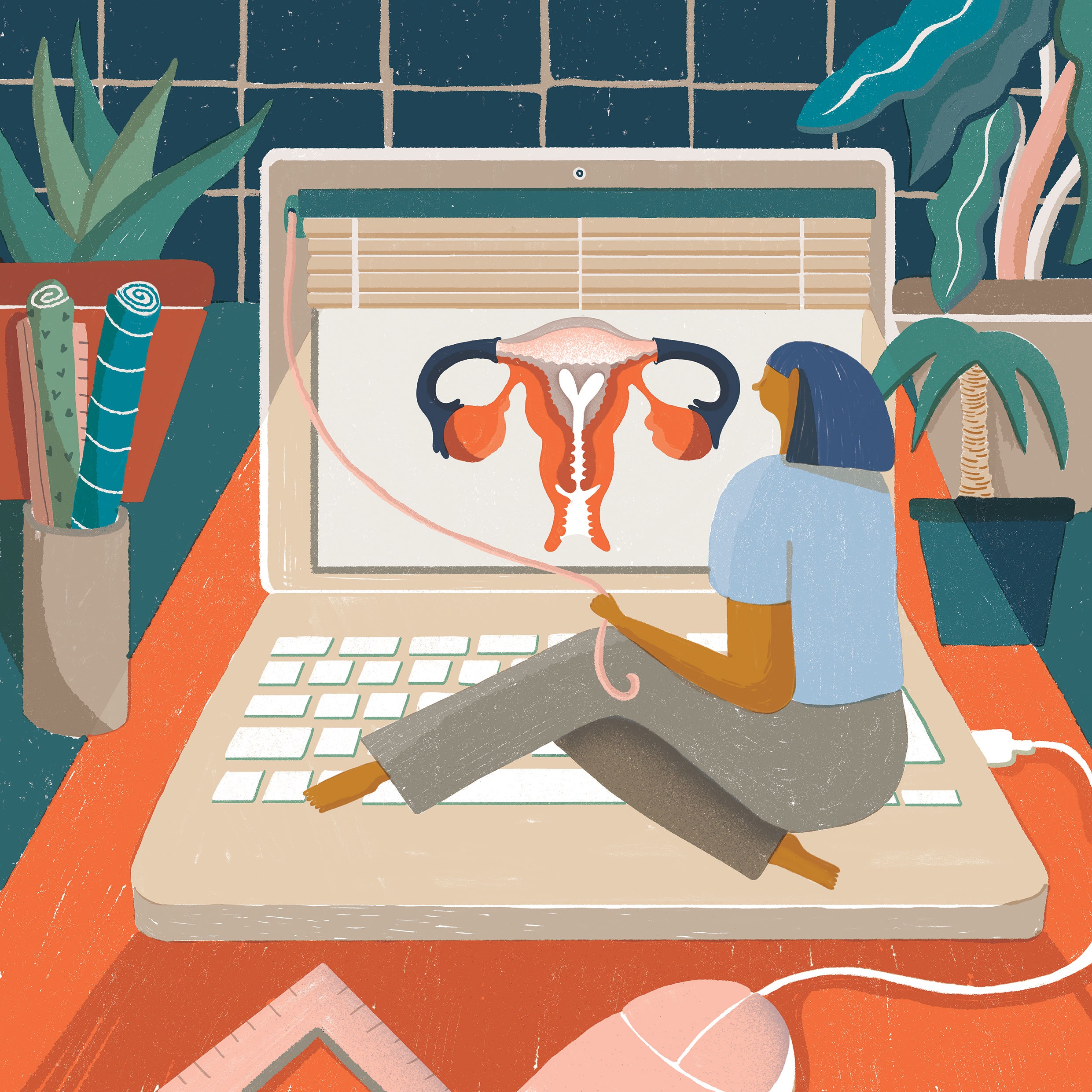 My period stopped. My panic attacks flared. My hair fell out and I couldn’t sleep. I gained 40 immovable pounds in three months. I was stuck in a seemingly endless loop of salt and sugar and sadness, punctuated by migraines, brain fog, and weird body pains. My jumbled hormones made me manic one day and depressed the next. I could not control my rage. Language was my life, yet I did not possess the words to know what was wrong with me.

Often, my task as a poet is to try to describe the indescribable. Instead of deciphering my body’s alarm — its message being: *girl, you’re ’bout to break down* — I disregarded it. But I had shit to do and something to prove — it was the final semester of my MFA program, and I was stressed about my thesis, a collection of poems that I would have to defend before graduating. At 33, I was older than the other writers in my cohort and one of few women of color, which meant I had to work harder than anyone else. Or else.

When the time came, I nailed my graduate thesis defense. But the next day, a kind of shrapnel shredded my right ovary in throbbing bursts every two minutes. I was writhing on the bathroom floor for hours, clenching my sweat-drenched fists at 2 a.m. But I refused to go to the hospital. I told myself I could handle the pain. I was lying, of course. I didn’t know how to listen to my body, and I didn’t know how to advocate for myself.

After a night of anguish, my partner persuaded me to go to a walk-in clinic. On the way there, every bump and divot in the road ricocheted through my guts. The doctor at the clinic ruled out appendicitis and told me it was a ruptured cyst, but there was nothing she could offer besides painkillers. I felt helpless and was out 50 bucks, so afterward I did some extensive Googling and WebMDing of my constellation of confusing symptoms — abnormal menstruation, hirsutism, acne, insomnia, depression, pelvic pain, weight gain, etc. I discovered the acronym that had been bombarding my uterus: PCOS, polycystic ovarian syndrome, a reproductive hormonal disorder causing enlarged ovaries riddled with cysts, which in turn can lead to metabolic complications that may affect overall appearance and well-being.

I wanted professional confirmation so I could ameliorate my symptoms, and I forced myself to make a doctor’s appointment. I hadn’t gone to the gyno in over a decade, because until recently, I’d had no health insurance as well as a deep fear of vagina doctors. When I was thirteen, a white woman doctor checked to see if I was still a virgin, repeatedly asking if I’d been a “good girl” during the entire examination. (I didn’t realize that this was sexual assault until years later.)

I met my new doctor — another white woman — and informed her about my ruptured cyst, missing periods, violent mood swings, and, and, and … She belittled my suspicions. She told me that PCOS was “unlikely” and that I was “too old” to start showing symptoms. But I wasn’t leaving. I had already expended so much mental and physical energy to be in that examination room with the white paper sheet crinkling under my butt as I shifted. My stomach flipped as my frustration swelled. I refused to walk out of another doctor’s office without answers.

Her casual dismissal of my problem reminded me of what I’d so often seen living as a black woman in America: an erasure of my distress. I was done micromanaging my anger. Far too often, I’ve been made to feel like a loud stereotype because of my suffering, which has led to my silencing and shaming myself out of fear. Not anymore. I couldn’t afford to be afraid, especially when my health was at stake. Numerous case studies highlight the alarming disparities in treatment for black women versus white women, especially in cases dealing with (4), (5), and (6). As Nina Martin and Renee Montagne wrote in a ProPublica/NPR story, citing (1), “black mothers in the U.S. die at three to four times the rate of white mothers, one of the widest of all racial disparities in women’s health. Put another way, a black woman is 22 percent more likely to die from heart disease than a white woman, 71 percent more likely to perish from cervical cancer, but 243 percent more likely to die from pregnancy- or childbirth-related causes.”

At my insistence, my doctor scheduled a transvaginal ultrasound and blood work. The next day, a nurse called to confirm: I had PCOS.

In the X-ray of my enlarged ovaries, the string of black and white pearls shone like little full moons, and my doctor stood corrected. She pointed to them and said there was nothing I could do to “fix it.” Once you have PCOS, you have it for the rest of your life. She said I should lose some weight and decrease stress. I laughed at the impossibility. She added that it might impact my chances of getting pregnant, since PCOS is the leading cause of infertility among women. But I wasn’t trying to get pregnant. I just wanted my body back, and my doctor offered no help or relief. I was baffled by the lack of concern or knowledge. I wanted an action plan, a pamphlet — anything. Instead, I left with nothing but another copay.

I returned to the trusty Internet. I watched YouTube videos, read articles, and bought books about reversing PCOS symptoms. I started taking reformer Pilates classes at a studio across the street from my apartment. I had walked by the long, ropey machines every day on my way to class, past those gorgeous white women on their backs in pure, stretched-out bliss. I used my savings and signed up for a monthly membership. I was the only black person in my classes, hyper-visible and uncomfortable, but I was done with nonverbally apologizing for my otherness. I was done with shame. I stopped saying sorry for the space I needed to take up in the world to survive and breathe and locate my neutral spine, dammit. I showed up to class with my hair wrapped, ready for that delicious mind-body connection.

I was done with ignoring my pain, and I was done with putting my pleasure last, too: in sex, in the grind, in everything. I had to redefine my relationship with work, which was bred from a scarcity mentality and constant hustling. I had to sit still, get quiet, and reel back in an effort to defrag my tangled, anxious, burnt-out body. It was a radical me-first step in my recovery … and it worked! Stubborn weight started to drop. I lost twenty pounds in two months from self-love, movement, and following a ketogenic diet to combat my insulin resistance stemming from PCOS.

And I drank water — lots of water. A shit ton of water. I started saying “no,” which was difficult at first. I simplified my life. I stopped letting emails frazzle me every ten minutes. I took all social-media apps off my phone. I started daily affirmations, started loving my body out loud and often. I started taking naps during *Keeping Up With the Kardashians* (something about those juicy-lipped rich women’s vocal fry comforts me). I started a new tradition with a girlfriend: every Friday we text each other Body Benedictions, listing the ways in which we have taken care of ourselves throughout the week. I started soaking in self-care baths with Coltrane, lavender oil, Epsom salt, candles, and a dog-eared book. And I got a puppy, too.

Audre Lorde wrote, “Caring for myself is not self-indulgence, it is self-preservation, and that is an act of political warfare.” I stopped letting pain colonize my life. I became an advocate for myself on and off the page. I was no longer afraid to vocalize my needs, which in turn impacted my poetics. Poems are bodies that remind us we have bodies, and I wasn’t afraid to tell myself or my lover or my doctor what I needed to survive. After several months of listening to what my body needed, my period came back, bright and on schedule.

I still troubleshoot with my PCOS daily, but my symptoms are much more manageable. I gather the borders of my body with care. I make a home for my suffering with a giant room for joy. Abundant joy. Yes, even joy for all those white women at Pilates. I see you. I love you. But I love my body and myself first.

*Tiana Clark is the author of* (2) *and the forthcoming* I Can’t Talk About the Trees Without the Blood.