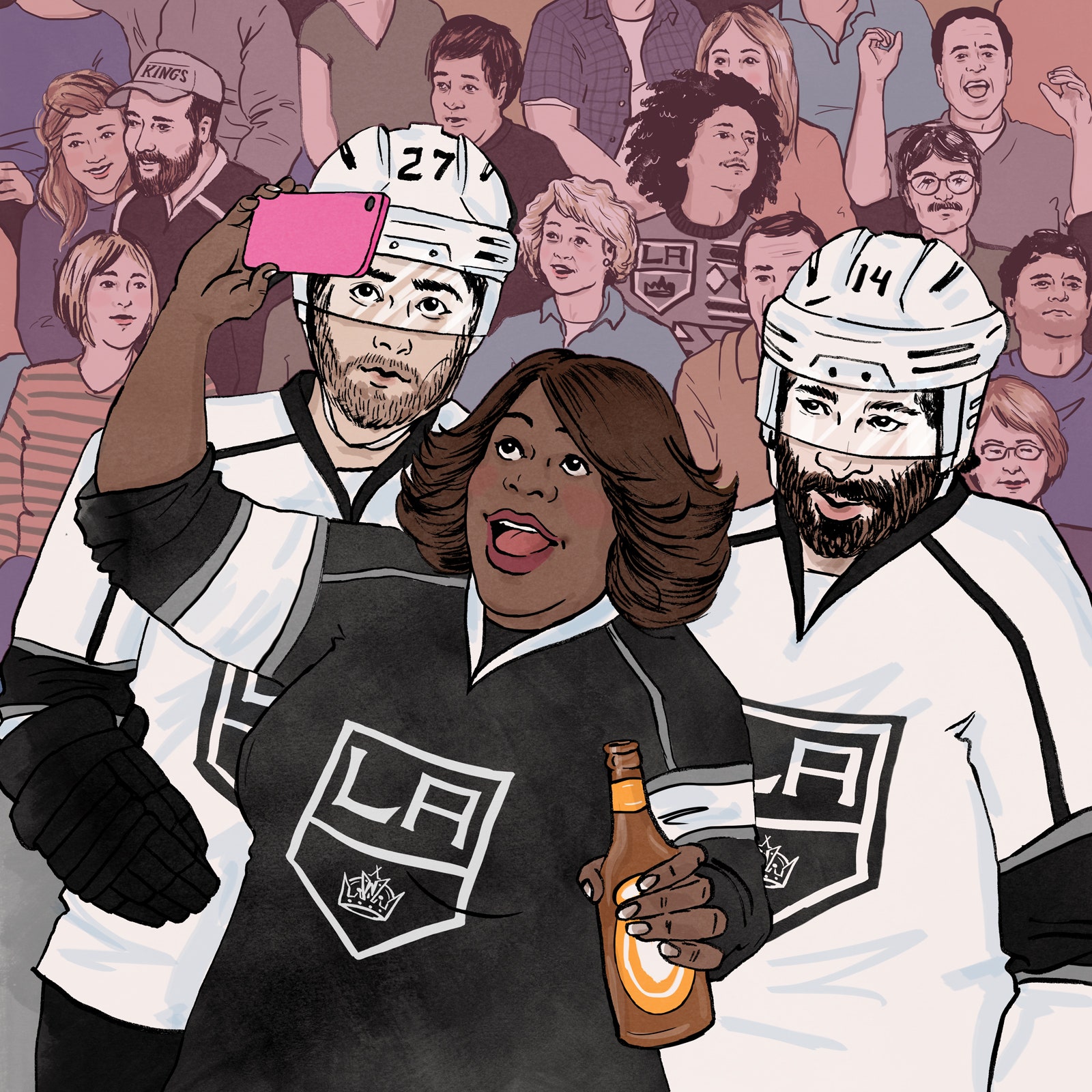 If you follow me on social media, you may know that I am an LA Kings fan. I’m not kuh-ray-zee, but I am definitely enthusiastic. I love me some Kaaannnngggsss. I know that meeting a black woman with a love for hockey is a bit like stumbling upon a unicorn in the woods … or a unicorn anywhere. I’m sure it’d be just as surreal finding a unicorn in downtown Chicago. But here I am.

So how does a black girl from Jersey become a hockey fan?

I was on Twitter one night reading my @ mentions when I saw a tweet from the LA Kings account inviting me to come to a game:

That last one was just so y’all would know I AM LEGEND.

I decided to go, and took my friend Ted with me to the game, because I didn’t know shit about hockey. He’s a big sports fan, so I figured he’d be interested in this version of “lacrosse on ice.” We had the VIP hookup, which means we had free valet parking. And while valet parking at Staples for Kings games is wayyyyy cheaper than, say, for a Lakers game, free is free. It made me feel fancy.

> I decided to go, and took my friend Ted with me to the game, because I didn’t know shit about hockey.

When we got there, we were greeted by Pat, a handsome bearded young man who is the director of digital media for the Los Angeles Kings, a.k.a. the guy behind the tweets. He was with Heather, a delightfully sunny blonde. They introduced themselves, and then Pat handed me an official jersey that read TREAT YO SELF on the back. Pat was a big *Parks and Rec* fan, followed me on Twitter, thought I was funny and “legendary” at the live-tweet, which is what led to the now-monumental invite. He had had the jersey *made* for me. For ME. A total stranger had gifted me a personalized piece of clothing. I mean, the free parking was already enough to make the trip worth it, but now this? Needless to say, I was helluh geeked. I basically made this trip for the beer and ended up with a new article of clothing! The Kings coulda been the worst team in the league, but that simple gift opened my heart to these yet-unseen ice Vikings.

(Pat would later say in a radio interview that getting me to become a Kings fan is one of his proudest moments. And I told him it was the jersey, homie. It. Was. The. Jersey.)

Once we got inside, Heather took us through some heavy double doors that were manned by a security guy who was very serious about checking that our tickets allowed us on this level. We entered a hallway that looked like it could serve as the passageway for deliveries, i.e., it was *not* pretty, so I was wondering, *Where the hell is this chick taking us?* As if reading my mind, she told us: “We’re going to the Chairman’s Room.” Not gonna lie, my posture straightened a little, and I strode as though newly knighted. Your girl was doin’ big thangs.

The Chairman’s Room turned out to be a li’l barroom that had snacks and TVs playing sports channels. There was an older black couple at the bar, and for me it wasn’t a big deal cuz this is LA. Black folks are everywhere, right? But the novelty was lost on me because I forgot *where* I was. I was at a hockey game, in the Chairman’s Room, where people with the baller-baller/shot-caller tickets hang out. The novelty was not lost on the older gentleman, who, upon seeing me, lit up with such excitement that I thought maybe I knew him. I didn’t. He was like, “Hey, sistuh!” A little thrown by his eagerness, I was like, “Heyyyy … sir.” And then it dawned on me. We were THREE unicorns in a basement bar. Even this unicorn couldn’t believe it.

> We were THREE unicorns in a basement bar. Even this unicorn couldn’t believe it.

When it was time for “tip-off” (that’s what I called it cuz, as I mentioned, I didn’t know shit about hockey), we left the Chairman’s Room. Heather directed us toward a group of people gathering near a tunnel, and that’s when I saw the players. They were click-clacking right toward us. They were fucking HUGE. They looked like the Chicago Bears defensive line if they wore lifts in their cleats. Just enormous. This piqued my interest. Nothing makes a big gal like myself feel petite and feminine like a pack of giants striding by on the way to a brawl — literally. Hockey is basically a melee on skates with a few goals here and there. I like to call it the Clash of the Ice Titans.

We had second-row seats and were next to Colin Hanks and a friend of his. Colin and I had recently met at a staged reading, so it felt as though I had a crew. I placed my beer in the seat cup holder and opened the program to see what these titans looked like without helmets. I was pleasantly surprised to find that more than one of them was hot like fish grease. Coupled with how large they were, this made me feel warm things inside. I promptly pulled out my phone and created my first hockey VineVid/tweet, called ” (2).”

Both Colin and Ted tried to explain the game to me, but they might as well have been speaking Swahili for as much as I understood. I did, however, make an analogy that Colin was impressed with: ” (3)” is to hockey what (4) is to football. He said, “I can’t believe I’ve never thought to make that comparison,” and I thought I was a sporting genius. But that was as far as my genius went. To this day, I don’t get how the players know exactly when to substitute from the bench without so much as a hand gesture.

I was having such a good time that even Bailey the Lion had me in stitches, which is quite a feat, seeing as mascots freak me the frack out. By the end of the second period, we were down 2–1, but no matter. I was in hog heaven because I had a cold Newcastle and live, thrilling, action-packed entertainment.

> I was in hog heaven because I had a cold Newcastle and live, thrilling, action-packed entertainment.

My bubble was burst when Ted told me that if the Kings lost the game, I would be considered bad juju and would likely not be invited back. I panicked as though I were about to miss the last flight home for Christmas. That third period started, and I’d never cheered so hard for something I didn’t understand in my LIFE. We scored two goals that period and won that game. I looked at my Twitter feed at the end, and there were tweets regaling me as good luck! I reveled in the honor as though I had actually had anything to do with the night’s win.

After that, I was hooked. I attended several games the following season. I would always bring my jersey and put it on once I got there, because I didn’t want to do anything different from my last “good luck” effort. Because I attended games as a guest of the organization, I was given prime seats. A few times I sat in the owner’s box, but more often than not, I was seated on the glass near the team, and *that* was my favorite. I was ALL IN. I was a superstitious, jersey-wearing, glass-banging, full-fledged Kings fan.

The Kings made it to the Stanley Cup Finals the following season. I was there when we won the Stanley Cup in game five against the New York Rangers. I screamed, cheered, and howled as loud as any die-hard fan there that night. The energy in Staples was like nothing I’ve ever experienced. As a Duke alum and Blue Devil fan who was in the stands at our last national-championship win away from (5), I can tell you it’s nothing like being in your home stadium and having nearly all 18,000 in attendance lose their shit because their boys just did their damn thing. So, yes, I’m officially a hockey fan. Like a first-time gambler hitting the Vegas progressive jackpot with only a $20 bill, or a newbie winning a (1) on their first trip to the track, it’s been a perfect storm for a vuh-ry suh-rious problem. This unicorn is hooked! #GoKingsGo

*Retta is a codependent actress, clotheshorse, coffee drinker, handbag aficionado, joke slinger, sometime vocalist, and apparent “writer” who owes a world of gratitude to both cachaça AND Uber.*