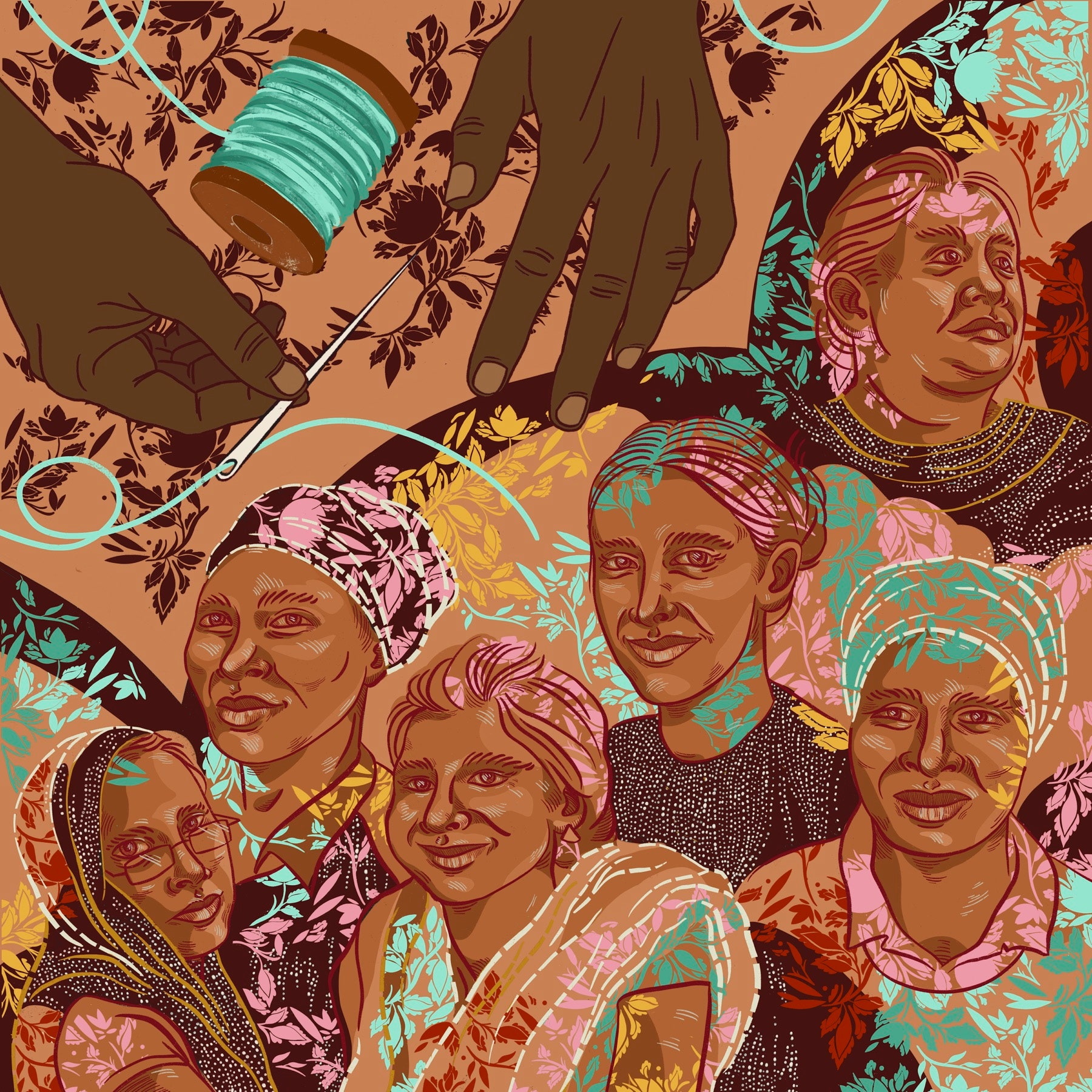 _This article is part of a Lenny series on Extraordinary Women produced in partnership with Cole Haan. Read previous parts of the series_ (1) _._

Rebecca van Bergen still gets sweaty palms when she thinks about budgeting — even a decade into her role as founder and executive director of (2), a global nonprofit that helps artisan workers build profitable businesses. This makes her massive, precocious success seem like it’s remotely attainable: Rebecca didn’t let her initial lack of business knowledge keep her from going after a phenomenal idea.

Rebecca founded Nest eleven years ago, when she was just 24. She had received her master’s degree in social work when she decided to enter a business competition with the idea for Nest. “This was before _artisan_ was a buzzword,” she tells me. “Ethical fashion didn’t exist.” But when she won that competition, she hit the ground running, translating what she’d studied in school — how to talk to women in trauma — into a business with sights on the fashion industry.

Through word of mouth and her entrepreneurial spirit (she wasn’t afraid to ask for help, she notes), Rebecca found her way into a world she knew little about. The path wasn’t always straight, but her commitment to building relationships helped her create her own definition for what it means to start a nonprofit. Now, Nest has helped develop more than 350 artisan businesses in 50 countries where homeworkers and craftspeople with skills that include Indian handloom weaving, Kenyan Maasai beading, and Mexican pottery-making can partner with luxury-fashion and home-goods brands. Through Nest, these women learn how to pivot on the skills they already have to find greater economic opportunities.

I talked to Rebecca about the unconventional ways she went about launching her nonprofit, the powerful impact commerce can have in women’s lives, and more.

**Molly Elizalde:** How did Nest grow out of what you were studying in graduate school?

**Rebecca van Bergen:** I actually didn’t have the idea for Nest during graduate school. I got my master’s degree in social work, and most of my coursework was around working with women abroad. I thought I would practice social work in a more traditional way.

Right when I was graduating, (3) for microfinance, and it started being called the solution to poverty. I had just spent two years studying social work, which is more about working directly with an individual woman. Through that lens, it seemed like microfinance could be really challenging for poor women if it wasn’t coupled with more comprehensive business-development training.

I was really starting to think about what a more holistic model could look like for women internationally, and how craft could be an overarching sector with which to work. I went to Washington University in St. Louis, and they had a business-plan competition specifically for social enterprise that was done between the social-work school and the business school. On a whim, I had the idea for Nest and two weeks later applied for that funding and won. I won $24,000, which, eleven years ago in St. Louis, Missouri, was enough to start a business. So I did.

**ME:** I would love to hear about the beginning of Nest. What was it like to launch a nonprofit without a background in business?

**RvB:** Going back to the early days, I was only 24. I had no connections in the fashion industry whatsoever. I didn’t know how to write a business plan or what financial statements were. I had studied how to talk to a woman in trauma — it’s just a totally different skill set. So I called my entrepreneurial father, and he was like, “Great, send me your business plan and your financials, and I’ll critique it and send it back to you.” And I didn’t even know how to start to do that.

So instead, I did what came more naturally to me, which was to call everybody I knew and talk to them about the idea and get their feedback. Through that process, I inspired lots of my friends to help. One of my friends from high school was an attorney, and he convinced his firm to take us pro bono as a client and filed all of our 501c(3) paperwork. His girlfriend worked for Daily Candy, and so they featured us in every single one of their issues in the first year of our operations.

> You can’t just be a visionary as a social entrepreneur, you have to actually create a to-do list and get it done.

The first time they featured us, overnight we had thousands and thousands of orders. Martha Stewart called to feature us, and I was on CNN. But again, that was just through word of mouth, not because I had a marketing plan or had put together a pitch jacket and brought it to Daily Candy.

In our early days, just building those relationships with people and being open to asking for help took us a really long way. It’s undervalued as an asset that people bring to the table, especially women.

**ME:** Could you give some examples of any obstacles you faced that made you rethink what it means to start a business?

**RvB:** One of the biggest things I’ve learned about starting a business is that there’s a fine line between being visionary and being practical. It’s true that to be an entrepreneur you have to have an idea for social change, but I think that is overemphasized. You can’t just be a visionary as a social entrepreneur, you have to actually create a to-do list and get it done. So it’s really how you translate the vision for the mountains into the immediate steps. How do you look up and down at the same time so that you’re walking forward while maintaining that perspective?

One piece of advice I give to people that are interested in starting something is to wake up every day and make a to-do list of what you need to accomplish to get to that vision — as granular as possible, so they’re accomplishable tasks.

**ME:** How did you use the tools that you learned in your graduate program in what you’re doing now?

**RvB:** There’s a huge invisibility problem for a lot of women around the world. You see lots of conversations around factory compliance, which is great, but around 40 percent of current garment manufacturing isn’t in a factory, it’s subcontracted to women in their homes.

In December, we’re launching a compliance program to bring visibility and development to home-based workers around the world. Artisan business development takes a lot of trust building. These are women in their homes; they often don’t have formal educations. They’re working for a business, and that business leader needs to trust us to get involved and help support them. These women need to be co-authors of the strategy with us. So there’s a huge amount of trust building that is definitely a social-work asset.

**ME:** How has building a business with a nontraditional background been a plus?

**RvB:** In the beginning, I would really stress that I didn’t have an MBA and that I had an MSW instead. I’ve really come to realize that learning through doing is so much more valuable. Had I taken a class on budgeting or finance or accounting, I maybe would have learned some things. But learning when it’s your payroll and your staff and your programmatic work that’s impacted is very real. I still get sweaty palms thinking about finances.

Now I work with big brands and big companies, some of them in luxury fashion. I knew nothing about fashion when I started, and I still know very little about who the cool players are. That’s just not my world. But I have a lot more appreciation about fashion as art and fashion as a form of cultural expression than I had before going into it. It’s so powerful to get a company like Target or West Elm to change the way they’re doing business — those decisions and the value of commerce impact hundreds of thousands of women.