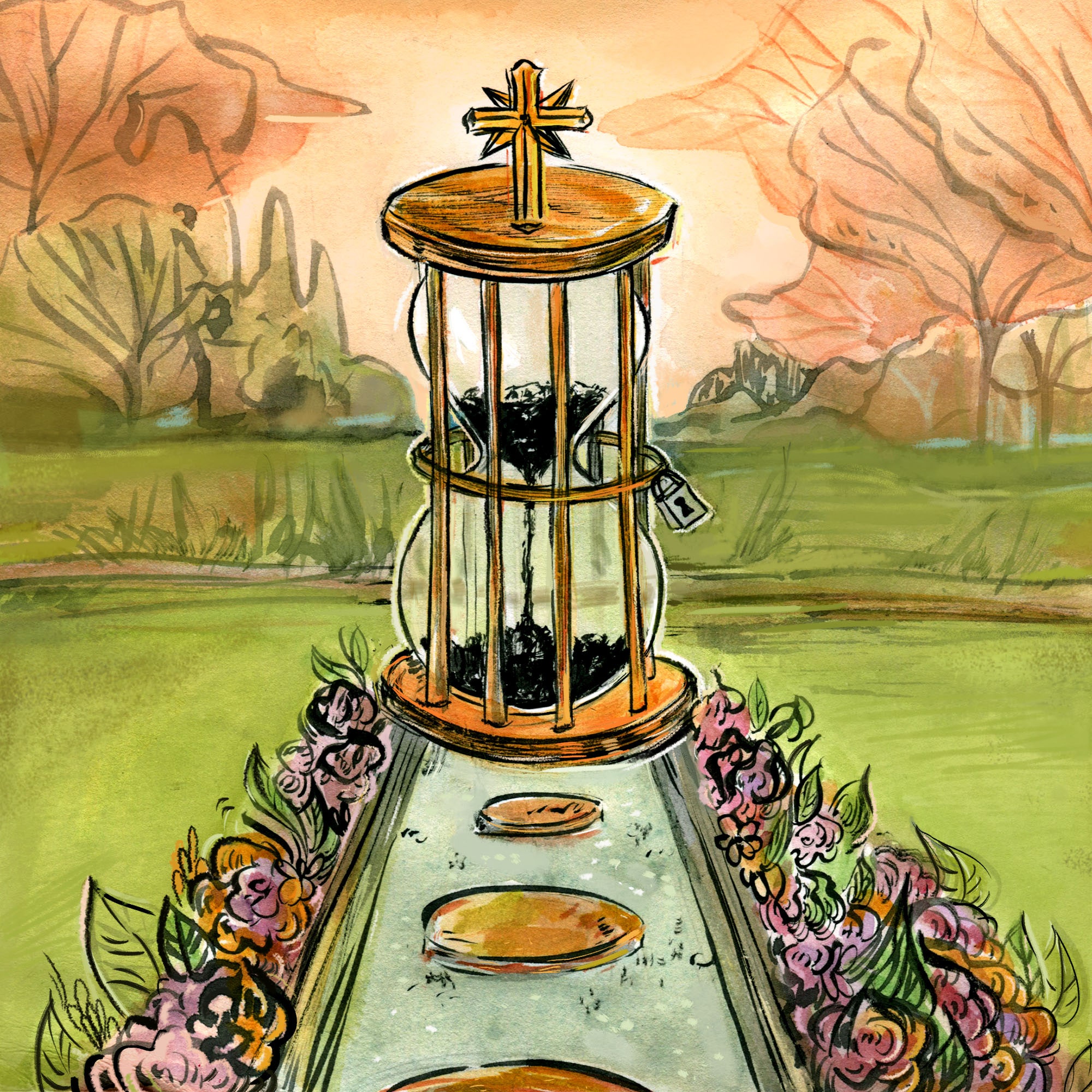 In the white gown my mother had worn for her own wedding, I stood before the altar in a Catholic church. I was not Catholic, and my fiancé, Jamie, certainly wasn’t, but the venue happened to be open and available. Our pastor held a tome that contained various ceremonies penned by L. Ron Hubbard, including the vows addressed to us, which included the idea that “girls” need frills — perhaps “a comb and a cat” — and that I was to remind Jamie that his “promise binds,” for “men forget.” I hardly listened to the folderol. The words didn’t matter. What mattered was that I was marrying the man I thought I loved.

I see now that what I loved was Jamie’s certainty, a certainty that included his choice of religion: Scientology.

About a year before I met Jamie, my charismatic, brilliant elder brother had fallen from a bridge and sustained a massive brain injury. This loss of mentor as well as brother was monumental. Without him to lead the way — without him to push against as I created my own way — I was in a chaotic, grief-stricken tailspin that, although I did not see it at the time, whirled me straight toward the certainty Jamie and his religion offered.

Which is not how I thought of things on my wedding day, of course.

When Jamie first invited me to tea, I was reluctant to accept precisely because he was a Scientologist. But I soon found his implacable assurance attractive, as well as enviable, especially in contrast to the existential anguish that after my brother’s accident suffused my days Jamie’s certainty — which I soon realized was Hubbard’s certainty — was deeply comforting.

Hubbard seemed to have imposed order on a disorderly world. He’d taken abstractions — concepts such as Communication, Survival, Ethics, Spirit — and, by naming and explaining their component parts, made them concrete. His “Dynamics,” for instance, separated the complicated mish-mash of self, family, environment, spirituality, and the physical world into discrete modules that could be addressed and improved. For Hubbard, Understanding comprises three essentials — Affinity, Reality, and Communication — and when a misunderstanding occurs, one can solve the issue by finding in which of those three areas the problem has arisen (a difference in Reality, say, about what time a meeting is set). He observes that Morals relate to cultural ideas, and Ethics personal ones. All this order, imposed on what I’d been viewing as nothing but meaningless chaos, was transformational.

Yet even as I reveled in these and other of Scientology’s concepts (we *have* a body, we *are* a spirit), I found it disturbing that new recruits were known as “raw meat” and that someone critical of the church was considered “fair game”: did that mean that Scientologists might, say, smash the typewriters of those who wrote negatively about them? I wasn’t sure then, but I later came to believe that’s exactly the sort of thing it meant.

Jamie managed to explain away these ideas, and, as our relationship deepened, I adopted a new tactic: trying to ignore his choice of religion. I’d been brought up outside of any particular faith, and I projected that carefree attitude onto our relationship. I’d recently attended a Jewish-Buddhist wedding. And Catholics didn’t always marry fellow Catholics, did they? My understanding of religion’s role in a life, much less a marriage, was monumentally blithe.

Astonished, wary, I watched as Scientology simply became more and more a part of my life. Was this steady immersion how they “got” you? I worried about that all the time. And my own concerns were inflamed by those of my parents, who were virulently against my involvement. Jamie insisted that because my parents were against Scientology, that they were “Suppressive Persons” and that I must “disconnect” from them.

“My parents are not SPs!” This was not the first time we’d had this conversation.

“You’re a Potential Trouble Source!” Jamie said, then cleared his throat, and I knew he was going to quote, verbatim, from a Hubbard policy letter. He’d memorized chunks of such texts so that he would never be guilty of what was called “Verbal Tech”: interpreting Hubbard’s ideas for someone else.

“A Potential Trouble Source,” he said, “‘is connected to an SP who is invalidating him, his beingness, his processing, his life.’”

He’d explained this: someone who’s happy one moment and weeping the next — “rollercoastering” — is a PTS because she is connected to an SP. And I did seem to be on an emotional chute-the-chute. Sipping my morning tea, I’d be compelled by the idea that, with the help of Scientology, I’d be more effective in all areas of life; by afternoon, I’d be fretting, massively, that Scientology’s “Bridge to Total Freedom” was a hoax — although, how could *so many* *people* be hoaxed?

I shook my head. “My parents are not ‘invalidating’ me! They are kind, supportive, wonderful people!”

“They are invalidating your involvement with Scientology. That is you, isn’t it?” Jamie said, his voice softening. “Your choice of a spiritual path?”

*It isn’t my path!* I wanted to say. But there was that kindness in his eyes.

It didn’t seem to occur to me that my “rollercoastering” might have had something to do with the loss of my brother. Or with the careening uncertainty I felt about this man to whom I was in the process of hooking myself. I was reassured by the fact that Jamie was an artist and deeply intelligent — things I wanted in a husband. It also helped that he was rock-star handsome. Surely ours were the sorts of problems any couple starting out might have. And, for quite a while, anyway, any doubts were swept under the rug when we kissed. Above all, there was that massive certainty offered by Hubbard’s “religious technology.”

And so I married Jamie. I see, now, that what I was marrying was his certainty — Scientology’s certainty.

Nevertheless, I continued to grapple with deep misgivings. About six months into our marriage, Jamie — convinced my skepticism was connected to my disapproving parents — made an appointment with the Ethics Officer in Scientology’s Celebrity Center. (Celebrity Center was the “org” we used, as Jamie was a well-known bass player and I had an acting career.)

The Ethics Officer reiterated what Jamie had been saying: If my parents were against my involvement in Scientology, they were Suppressive Persons; as a result, I was a Potential Trouble Source. He instructed me to enroll in a class that would illuminate these matters. Fuming, I made my way to the course room.

The walls needed paint; in one corner, the ceiling drooped. Through windows that needed washing, sunlight streamed onto wooden tables at which people sat reading, writing, leafing through dictionaries — studying. An aura of contentment, of sacredness, emanated from that shabby room. I stared in stupefaction. Then I stepped across the threshold, as if I were walking into Narnia.

And for a few years, I did feel that in the course rooms of Scientology I found a magic kingdom. Study was another area Hubbard had disassembled and put back together in a tangible, applicable form. In spite of a BA in drama and a two-year theater immersion program, I’d never thought of myself as a scholar. (Perhaps ironically, this is a gift those years in the Church gave me.) As I fell in love with study, a sense of gratitude and, eventually, obligation arose. I felt bound — I bound myself — to the organization that conveyed this precious information.

About a year after our wedding, Jamie and I decided to divorce. In the process, I spent hours in Celebrity Center, especially in its course room, weaving myself more deeply into the religion even as I cut ties with the man who’d introduced me to it.

By this time, many of my friends were Scientologists. I found them thoughtful, ethical, and empathetic. We believed in Hubbard’s assertion that “man is basically good,” and we were devoted to the idea that we could help others — through Scientology. However, there’s a debilitating tautology at the heart of this: a desire to leave the organization that insists you are good implies that you must be bad. When you are tempted to leave (as I was, and indeed tried to do, a number of times), you must confront whatever icky thing in your nature caused you to doubt how “being good” equals remaining in Scientology.

I could not seem to muster the necessary critical thinking skills to shake loose of this toxic circular logic. But gradually, my delight in study and other useful aspects of the Tech began to fade, replaced by a sense of myself as a fraud. Why did I stay in the Church when it was clear that so much about it was making me unhappy? Yet how could I leave if leaving meant I’d done something wrong?

This insidious aspect of Hubbard’s religion would wind up keeping me attached to the Church for seven years. People often ask, “Why didn’t you just leave?” It’s hard to explain, certainly to justify, how Scientology manages to erode what you, yourself, believe, replacing it with a certainty that the answers to all of life’s problems can be found only in the Tech. I eventually managed to summon the will to apply to the Iowa Writers’ Workshop. I was thrilled to be accepted, and the workshop’s distance from Los Angeles, and Scientology — geographically, culturally, intellectually — allowed me to finally slide away.

I spent ten years of my life pretending that decade in Scientology hadn’t happened (seven years in the Church, and three more before I was certain I wouldn’t be persuaded to return). It took another decade to confront and start to write about it. All these years later, I still recall those days — those years — I spent afflicted by doubt. I often wondered if others felt that way. I often thought of Hans Christian Andersen’s “The Emperor’s New Clothes.” Who would be the little boy who pointed, who would finally say what needed to be said?

When would that person be me?

*Sands Hall’s memoir,* (1), *is out today from Counterpoint Press.*