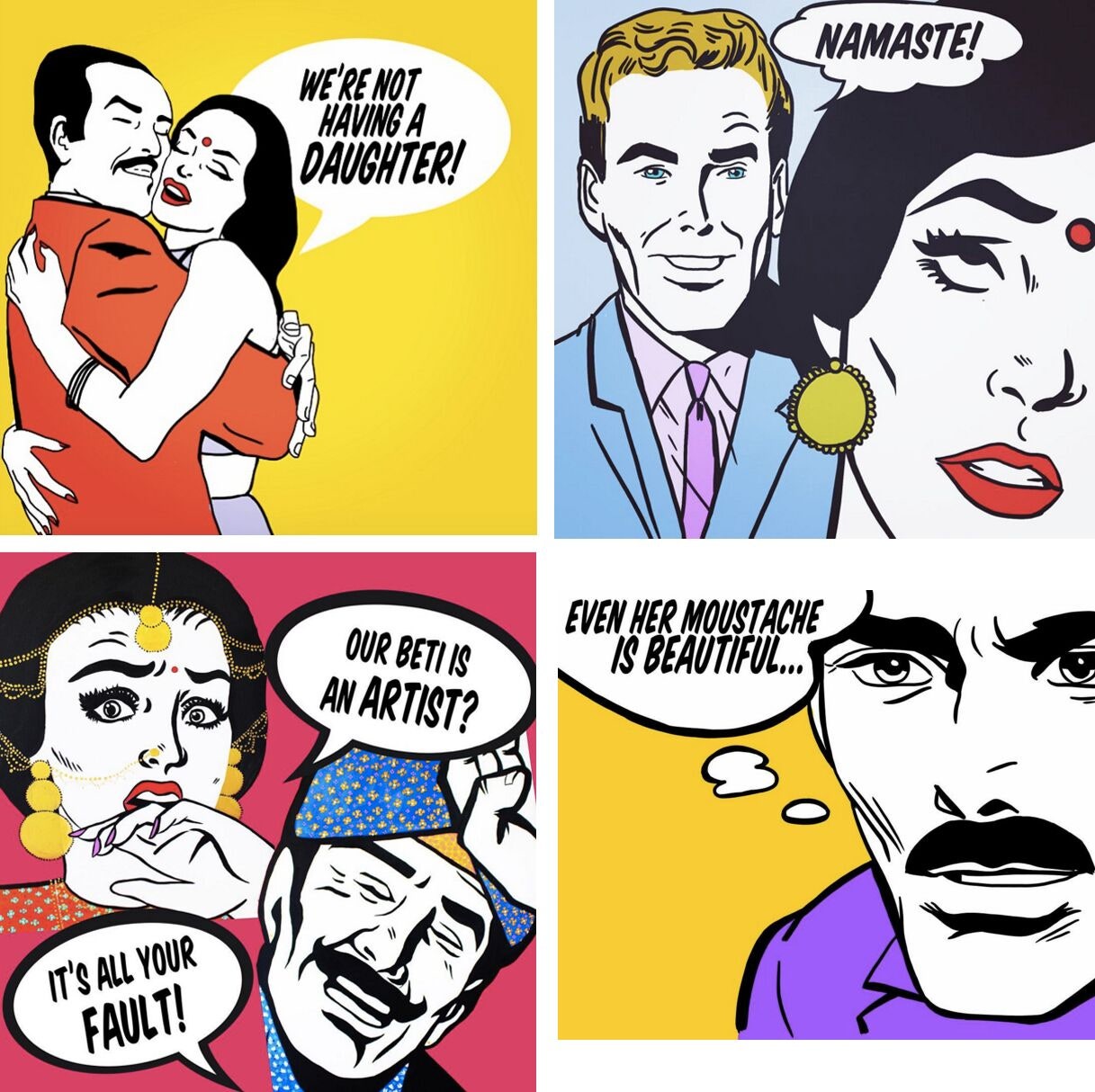 There’s a particular feeling of displacement that comes from growing up in a diaspora, never feeling 100 percent connected to the place you live or the culture you come from. The Instagram art of (6) (aka Toronto’s Maria Qamar, a daughter of Pakistani immigrants) takes day-to-day peculiarities of South Asian diasporic life and turns them into hilarious pop-art memes. When I first saw her work, I was instantly drawn to her ability to combine whimsy with cultural criticism, a hard and rare balance to achieve when tackling the nuances of life.

Hatecopy’s feed is like an Indian soap opera come to life, complete with familiar characters: meddling aunties, forbidden (white) boyfriends, and arch-nemeses who put salt in your chai. Since launching the project a year ago and making it her full-time job, her work has been featured in *Vogue* India, Dazed Digital, BuzzFeed, *Elle* Canada, and more. When we spoke by phone, our conversation affirmed my feelings as a fan. Hatecopy is hilarious, smart, and insightful, speaking both to particular South Asian experiences and broader issues of self-acceptance and celebrating your identity as a person of color.

**Manisha Aggarwal-Schifellite:** Has your relationship to art changed since starting this project?

**Maria Qamar:** I would say is more of a lifestyle than a hobby or career. I don’t see it as a job that I have to do, but it’s something that I feel like I can’t not do. It’s easy for me to put out sketches on Instagram whenever I want, but now when I make something, I have to keep in mind that this will be a print, or go on a T-shirt. I’ve just transitioned to doing art full time; it’s the only thing that keeps me excited and motivated for the future.

**MA-S:** Did you ever have internal struggles about pursuing art? It’s a hard field to get into, especially if you come from an immigrant family where there might be pressure to do something that seems stable.

**MQ:** My parents moved to Canada so their kids could have the opportunities that they couldn’t have back home in Pakistan. But the weird thing is that when we got those new opportunities, my parents said no anyway, because that wasn’t something we did back home. My parents had their own shit to deal with, like, “How am I going to learn English really quickly, so I can integrate with my coworkers, so I don’t get fired, so that I can provide for my family?”

That was a weird internal struggle for me because I wanted to be an artist, but I couldn’t because they said it wasn’t a stable career path. I did a degree in advertising and started working as a copywriter, but I was always drawing in meetings and stuff, and there was always that “What if?” in the back of my mind. It was only a matter of time before I started doing this stuff full time. I think my parents are scared to say anything to me now because I’ll just end up drawing it.

**MQ:** I’m a highly visual person. I love that you can casually scroll through Instagram and go through visuals that are appealing to you. I’m not saying my work doesn’t have any depth to it, but I don’t want someone kind of staring at a painting in a gallery, tilting their head and going, “What does this mean?” If you see something you like on Instagram, you’re going to tag your friends, you’re going to share it. It just moves well. I don’t think you get that with any other platform.

**MA-S:** I’m looking at the picture with the wife saying, ” (7)!” and the husband saying, “It’s your fault!” The comments say things like “That’s my mom!” It seems like you’re really connecting with people.

**MQ:** Most of the people who appreciate the work are affected by diaspora culture, and they’re actively seeking representation of people with their own skin color. They’re the same people looking at (8) or (1) videos, or watching Aziz Ansari and Mindy Kaling. People will be talking about their own inside jokes, and I’ll just be in on it too. I had this (2) where people would post what they think these two aunties are talking about, and it has more than 400 responses on it. People who respond to my work are engaging in that culture more and more, and making other Desis feel comfortable about being Desi in places that, not too long ago, didn’t allow you to be that.

**MQ:** There’s something the rapper Heems said: “When you’re a person of color, life is inherently political.” I just report on what I see around me and look at it later and think, *That is problematic*. Sometimes it’s quirky, like Grandma wants you to eat 12 rotis and that’s hilarious. But there are some things that require more serious commentary. I drew a picture of a man and a woman hugging and they’re saying, ” (3),” because that’s how I felt my parents thought when I was born. Daughters are seen as a burden in Desi culture and I didn’t understand why. I wanted to draw that and laugh at it.

I feel strongly about the picture of (4) skin-lightening cream. My mom used it on me when I was a kid, and she would say, “It’s good for your skin,” and it’s obviously the complete opposite. Nobody should use it. It’s damaging to your skin, and because darker skin is not favorable. Someone also told me, “Your father saw the pictures that you drew of (5), and he’s not very happy about it,” and I was like, “Shit, tough luck.”

**MA-S:** Do you ever think about how your work might be labeled because it deals with these themes?

**MQ:** I don’t really know how to see anything from another lens. This set of work is Desi-inspired, because I am Desi and that is the lens that I look through on a day-to-day basis. Everybody has their own way of describing my work, which I think is the best part about what I do. I label my work as Indian memes. As long as the work is making them laugh and is shareable and they love it, I don’t care what it’s labeled as.