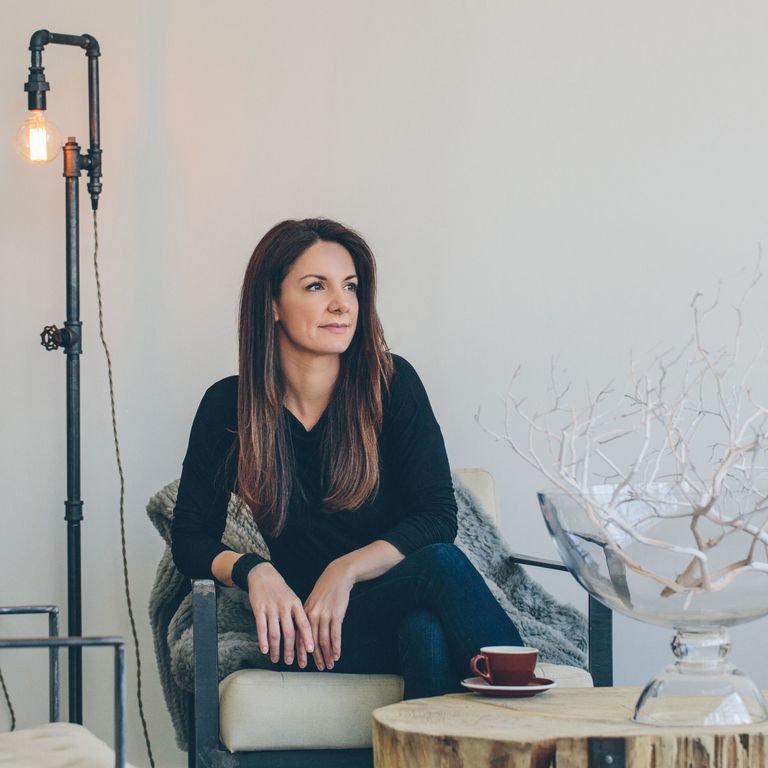 Kat Cole is irrepressible. Currently a group president at food conglomerate  (1), the 37-year-old exec has been heading up (2) since she was just 32, when she took the reins at Cinnabon. That’s after she rose the corporate ranks at Hooters and managed to get an MBA without ever finishing college—no small feat.

With her humble beginnings and killer work ethic, Cole has a lot in common with Joy Mangano, the real-life heroine that (3) portrays in the movie _Joy_ , out Christmas Day. Mangano invented the Miracle Mop, a product that went on to gross hundreds of millions of dollars. Like Cole, Mangano had been working since she was a teenager. Yet despite the tough hand she’d been dealt, Mangano, a single mom of three, proved that major wealth and cred await those with brains, grit, and a healthy dose of American hustle.

Lenny talked to Kat Cole about how she went from a Hooters girl in bright orange hot pants to Cinnabon president in just over a decade, how tough circumstances ultimately bolstered her leadership skills, and the importance of developing what she calls a #hustlemuscle.

**Lenny:** Let’s start at the beginning. Where did you grow up? What was your family like?

**Kat Cole:** I grew up in Jacksonville, Florida, and was raised by a single parent. I had a father who was a really great, sweet man but he was an alcoholic. So when I was nine, we left. I was the oldest of three girls, so I was helping my mom take care of my sisters.

**Lenny:** When did you start working?

**KC:** I had to start working early because if I wanted anything, I had to pay for it. Our food budget was $10 a week for three years. It was not 1955. It was the ’80s! People would say, “You poor thing, you had to grow up so fast.” On the one hand, yes, it’s sad, but when I think about everything I learned from those jobs, there’s no question that it worked out incredibly well for me.

**Lenny:** Did you know what you wanted to do with your career from a young age? Or did you just take the opportunities that came up along the way?

**KC:** I knew I wanted to get a job, and what do most high school students do? My first job was in a mall. I sold clothes when I was 15 or 16. Hooters recruiters—they were all existing Hooters girls—would go around the mall to find new employees. I was friendly and outgoing, but I was too young when I was recruited, so I was a hostess at Hooters while I was working at the mall. When I turned 18, I was old enough to serve alcohol and be a Hooters girl. It wasn’t an automatic promotion from hostess—I had to apply to wear the orange shorts.

I did it to save up for college. It wasn’t my dream to work there. My plan was to get my degree in chemical engineering, go to law school, and be a lawyer for DuPont.

**Lenny:** A lawyer for DuPont sounds like a really specific dream. How did you come up with it?

**KC:** I saw a paint can that said “DuPont Paint,” and I decided I wanted to work for them. My family lived in trailer parks and had blue-collar jobs, and though they worked really hard for what they had, I didn’t aspire to it. I was good at debate and chemistry, so I put those two together.

I started college as an electrical engineering and computer science double major because the University of North Florida didn’t have a chemical engineering program. But then, a few things happened while I was working at Hooters. One day all the cooks quit, and I ended up jumping in the back to do their job. You can either say, “Oh shit, we can’t sell the food and I can’t make any money,” or you can jump in. So another waitress and a manager and I made all the food that day. Chicken wings aren’t that hard to make. When they float, they’re done.

It became a series of events: When the restaurant needed someone to do something, I would do it. I was willing to fail because it was my first time doing things.

I built up a robust resume because I had worked every job in that restaurant: manager, bartender, waitress. At 19, I was still in college and I got a request from the corporate office in Atlanta: They wanted to open the first Hooters in Australia. They said, _you’re good with peers, you’ve worked every job_ . Had I not been curious and helpful in all those situations, there’s a good possibility I wouldn’t have been asked to go.

I’d never been on a plane and I didn’t have a passport. I’d only been out of Florida twice in my life, for cheerleading competitions. But I said yes, and my mom and I figured out that if I flew to Miami that night, I could get my passport in 24 hours. I bought my ticket and then flew back to Jacksonville in time to do a bunch more shifts at Hooters before the trip. It was an example of saying yes to _something_ , even if you don’t have the full capability. I call it #hustlemuscle.

**KC:** I was there for 40 days. I learned a ton, but I thought it was a once-in-a-lifetime thing. Then two months later, corporate said they were opening the first Hooters in Central America, and they wanted me to take more of a leadership role. So I went. I knew enough Spanish, so I thought: _cool, love it, fun_ .

Then the opportunities kept coming, and very quickly, I was failing college because I was gone so much. I ended up dropping out before I had even my two-year degree. I had no promises or contract at Hooters, but it was a compelling alternative. I do a lot of mentoring, and people ask me, “Does that mean you don’t believe in college education?” I say, if you’re in higher education and wondering if you should drop out, keep your ass in school if you don’t have a compelling alternative. But if you have an opportunity and you’re passionate, go for it.

So I kept opening restaurants. When I was 20, I was asked to oversee all employee training for Hooters. I packed my stuff into a U-Haul in Jacksonville and drove to Atlanta. I couldn’t even rent the U-Haul myself because I wasn’t old enough. I made $21,000 or $22,000 a year in that job—half of what I had made as a Hooters girl. I moved to this really shitty apartment in Atlanta and learned to live off a salary and not cash. I had to grow up fast in a different way.

Every 18 to 24 months, I was promoted and my career took off. I also volunteered a lot in the restaurant industry. It was incredibly helpful for meeting mentors and building relationships in other companies. I was on the nonprofit board of the Georgia Restaurant Association, and I worked with the Women’s Foodservice Forum. Those organizations taught me so much, and as a result I felt indebted. Leading nonprofits taught me corporate governance and how to manage CEOs, which has been inextricably linked to my success.

By the time I was 26, I was one of the vice presidents at Hooters. I led all training and operational franchising. Working there was very formative because it was a family-owned, privately held company. It was not so sophisticated or so large that they wouldn’t give someone like me a chance to lead all these initiatives. And because the brand is polarizing, they hired me from within. If I had been at a bank or a more traditional retailer, I would never have had those opportunities.

People ask me, “How did you work at Hooters for so long?” I always say—number one—women moved up at Hooters. They’re the best in class for tuition reimbursement. I’m insanely grateful for all the opportunities I had.

**Lenny:** How did you end up transitioning to Cinnabon?

**KC:** Through my nonprofit work, I met a ton of leaders who owned and ran companies. One of those groups, Roark Capital, recruited me. They had an opportunity that was really interesting to me: President of Cinnabon. At the time, we were selling Hooters, and I was getting my MBA. (I have my master’s without a bachelor.) I thought it would be a really crappy time to change jobs. But I got the position and became COO of Cinnabon in October 2010. Three months later, I became president. I turned the brand around, built a great team, and led it to the highest year-over-year sales increase in its history. We got a new CEO, and now I’m a group president at Focus Brands ​.

Around the same time, I got involved with investing in women-founded startups. Usually I’m involved in seed round and series A funding, and I help build brands and think through scaling—all kinds of startups, from a digital interior designer to a craft beer company to a gender-neutral clothing company. The founders are bad-ass. My corporate gig actually makes me a really great investor and advisor to startups, and being an advisor to startups makes me a more relevant corporate leader.

**Lenny:** Most of our readers are in their 20s, trying to figure out what their lives are going to look like. What’s your advice be for them?

**KC:** Don’t waste too much time trying to figure it out. Half the battle is doing something and getting started. Focus on things small enough to change and big enough to matter. Don’t pine over it or think too long, because the sooner you get started, the sooner you’ll know if it’s right.