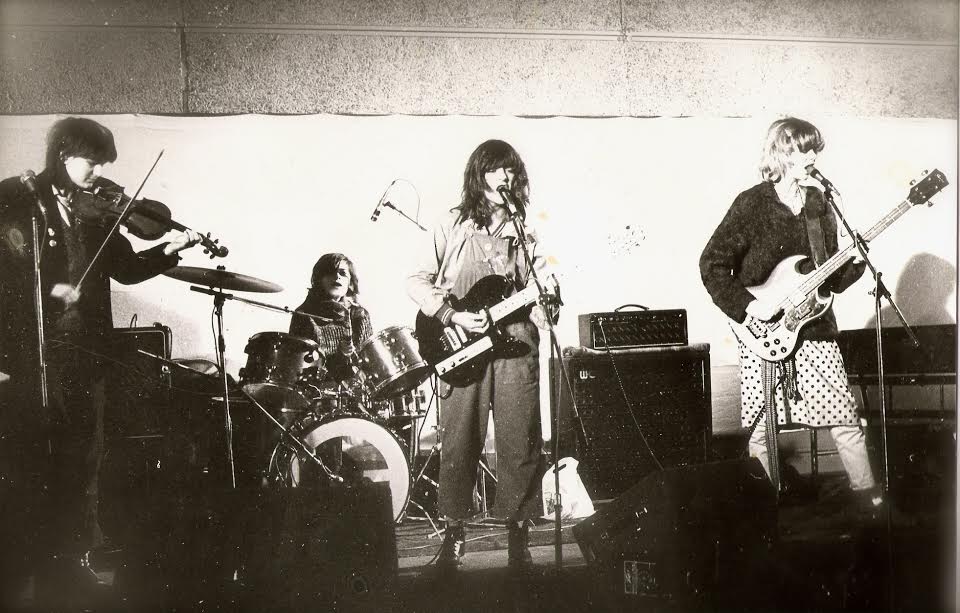 *The latest installment in Bloomsbury’s 33 ⅓ series — short books devoted to individual albums — tells the story of the debut LP from the Raincoats. Formed in 1977, the Raincoats were the first all-woman punk band to actively call themselves feminists, paving the way for the riot grrrl movement of the 1990s. Here, author and Pitchfork editor Jenn Pelly reflects on how she came to write (1) about their influential work.*

I had just turned twenty when my friend Neil sent me a mix of music that changed my life. It was not in the romantic manner of a hand-packaged cassette tape delivered by mail but rather in a more modern way that somehow feels quaint already: a Mediafire link shared via Facebook messenger. There, on this 18-track mix — which consisted mostly of aggro music like the Blood Brothers, Black Sabbath, and the screamo band Saetia — was, quite fortuitously, a bracingly raw recording that gripped me with a rare intensity. It was a cover of the Kinks’ “Lola,” reshaped by a women’s punk band from England called the Raincoats. They didn’t change any of the original lyrics to Ray Davies’s 1970 song, which lent their rendition a brilliant queer twist. But what I loved most about this unvarnished cover was how, among its brittle guitarwork and delightfully off-kilter drumming, women were shouting out loud together. In the words of Kim Gordon, “They seemed like ordinary people making extraordinary music.”

The rest of that .zip mix dissolved from my memory. But “Lola” and the album it came from, the Raincoats’ eponymous 1979 debut, immediately became a fixed part of my life. The band formed in the blaze of 1977 punk in London, but they sounded more eclectic and poetic. The Raincoats’ version of punk — introversion as punk, an inspired amateurism — felt profound to me. They wrote great lyrics about essential truths, too, like “In Love” and “The Void.” The Raincoats seemed to present a whole new paradigm for what music could sound like, and by extension, an entirely new way a person could be: Shambolic? Joyful? Scrappy and shy? Punk but not uniformly, and especially female, somehow? And kind of mysterious …

As a city-dwelling, fairly introverted, sometimes-dour girl outsider, I felt like the Raincoats were speaking directly to me, traversing time. But I struggled, back then, to articulate why this post-punk band felt automatically like an extension of me, of how I relate to the world. My relative bewilderment over the Raincoats’ existence led me to write (2), published this fall as part of Bloomsbury’s 33 ⅓ series. I wanted to investigate what made the Raincoats’ music feel so monumental to me. I also, in a sense, wanted to better understand myself.

By the time the Raincoats’ released their 1979 debut, the lineup consisted of original members Ana da Silva and Gina Birch on guitar and bass — who had met at art college and had never been in a band before — along with classically trained violinist Vicki Aspinall and impressionistic drummer Palmolive. They all contributed lyrics, and everyone sang (except Palmolive, because she didn’t want to). Vicki joined the Raincoats after she found an ad on a wall in the radical Compendium bookshop that said “Female Musician Wanted: Strength Not Style.” Ana, from Portugal, was infatuated then by the poetry of Bob Dylan and Patti Smith, while Gina was studying conceptual and performance art. Palmolive, originally from Spain, had been the founder of the first all-female punk band ever, the Slits (she was kicked out of that band for failing to keep time — not a requirement for the Raincoats). Three-quarters of the Raincoats (3), or, as Gina put it to me, “We lived on fresh air.”

Vicki brought a feminist consciousness to the Raincoats, and they became the first all-woman punk band to actively call themselves feminists. This made them polarizing in the press despite the subtlety of their music. The group’s only explicitly political song, in fact, was “Off Duty Trip,” a reflection on rape culture penned by Vicki and her friend Caroline Scott. “Off Duty Trip” was inspired by a news story from the time about a soldier who had raped a woman in a park at night and was not punished due to his status in the army, his institutional privilege. This sounds despairingly familiar in 2017.

Still, the Raincoats’ politics and feminism came through not just in their lyrics but in their compositions as well; the songs have an egalitarian air. This was bolstered by the fact that both Ana and Palmolive came to London from fascist countries — democracy, as Palmolive recently told me, was “non-negotiable.”

Many people know the Raincoats because Kurt Cobain was a huge and vocal fan of their music, or because they were (4) in *10 Things I Hate About You*. But they continue to resonate with new generations. Hayley Williams of Paramore (5) about them in March. In a recent episode of the *New York Times*’ “Still Processing” podcast, host Jenna Wortham described the “empowering” and “very formative” effect of this record for her: “They do this cover of the Kinks song ‘Lola’ that just moves me to tears,” Wortham said. “The first time I heard it, I was just like, *Wow, girls can sing about other girls — cool*.” The Oscar-nominated 2017 film *20th Century Women* (6) around the Raincoats, who writer and director Mike Mills said “echo the philosophy of the film, which is trying to promote these imperfect connections between people, and imperfect people generally.”

I learn things about life when I listen to The Raincoats. In their songs, I hear that it is possible to find grace in the frayed edges of existence. That things often feel shaky because they are moving somewhere new. That showing the seams of yourself is a kind of poetry. The story of the Raincoats, ultimately, is about resisting the myth of perfection, about the power of vulnerability, about women having agency — and the magic that surfaces when that happens, a magic I humbly tried to put to page.

*Jenn Pelly is an editor at* Pitchfork. *Her writing has appeared in* Rolling Stone, SPIN, Teen Vogue, *and* *The Wire.* *Pelly’s book on feminist punk band the Raincoats was published in October as part of Bloomsbury’s 33 ⅓ series.*