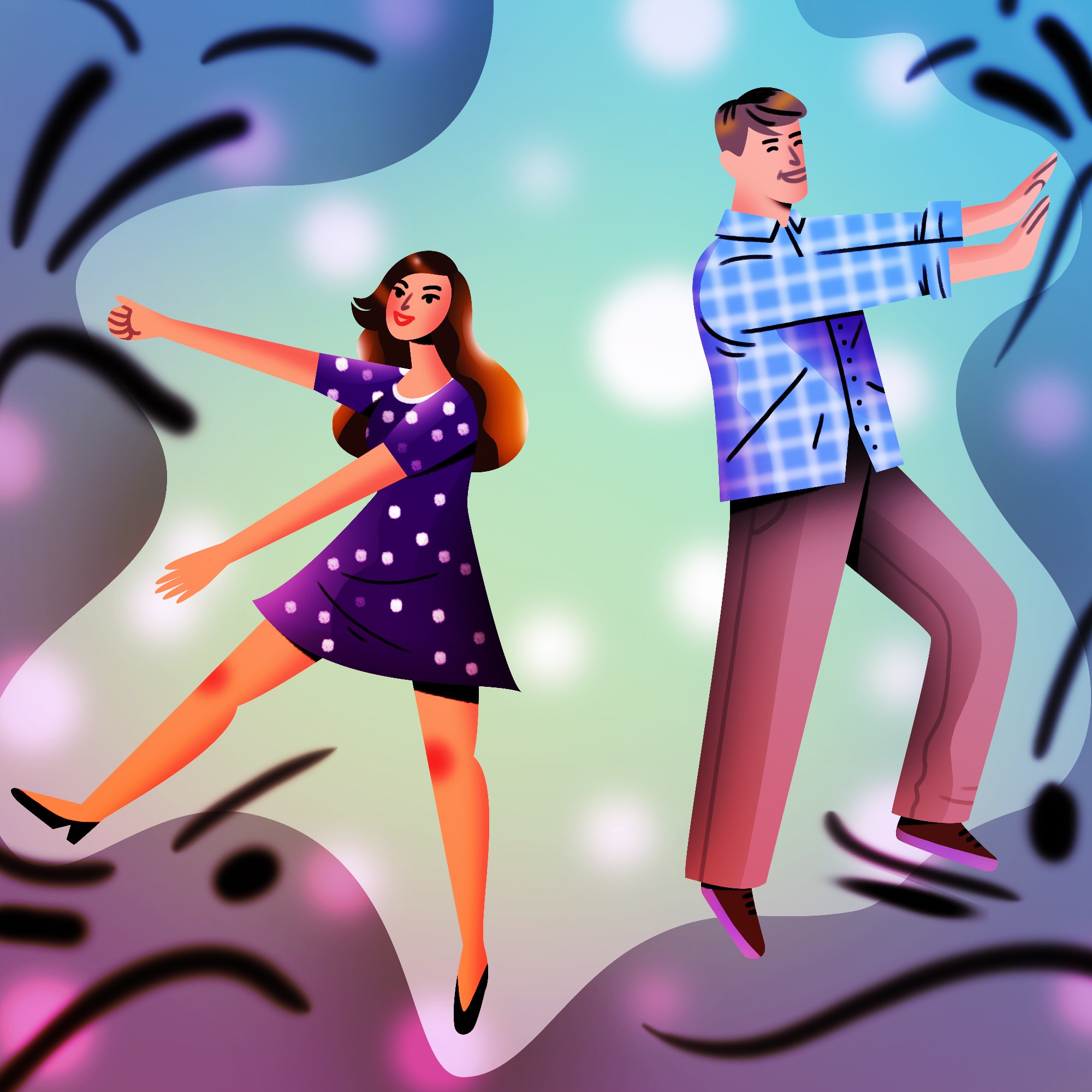 Nine years ago, I met Pete Holmes at a comedy show in lower Manhattan. I remember him laughing at this goofy bit I did about my Texan dad pronouncing fajitas “frojitos.” From the stage, I thought, *Well*, that *guy likes my comedy.* I was new to stand-up and thankful for the validation, especially from a more seasoned performer. *I’m a freshman, and a senior dug my joke! Cool!*

Months later, we ran into each other at a mutual friend’s holiday party. Full of whiskey and holiday cheer, Pete and I started doing bits like we had been friends for years. At one point in the night, we even called my mom. She had seen him perform a few months before and had enjoyed his set, so the gist of the convo was, “Mom, I’m with that guy from that show. Here, talk to him.” Needless to say, a few weeks later, we started dating. Clicking with a person’s sense of humor works like a drug in that way. When Pete and I met, we doped each other up, so becoming a unit seemed like the logical next step.

One struggle we faced in the relationship stemmed from the fact that some of my comedy peers assumed Pete was “helping me” with my career. That’s why when Pete asked me to be on the dais for his 30th-birthday roast, I hesitated to accept. See, the roast took place during Whiplash, arguably the most prestigious show in the city. As a baby comedian, I hadn’t been booked on it yet, and I wasn’t sure this was the best way to break that seal. Sure enough, during the roast, a more veteran comedian on the dais made a joke about how this was the only way I could get booked. It legitimately made me howl with laughter, until one of my peers stood up in the middle of the otherwise-seated audience and started slow-clapping, like, *Finally! Someone is calling Jamie out! Bravo!* He even locked eyes with me while applauding the joke, to turn the knife in my stomach just a bit more.

When Pete recommended me to a show in Brooklyn a few weeks later, I completely lost my shit on him. “Do you know what this looks like? I don’t need you to elevate me! I have to go at my own pace!” He only did it because he believed in me and thought the booker should know who I was, but I didn’t see it that way. I didn’t have enough faith in myself at that point to think, *Oh, maybe I am good enough to do the show.* I just cared about the Slow-Clapper, his cohorts, and their opinion of me.

A few months later, Pete and I broke up over the phone. He was in Los Angeles, and I was in Brooklyn, so I couldn’t engage in a cathartic in-person yell-a-thon. I just had to accept it, which meant tearfully schlepping my broke ass through the snow every day to write breakup jokes at a coffee shop. I did not envision a future that included Pete in any real way, except maybe a polite exchange of “hellos” if we happened to be on the same show.

Three months passed, and I was thriving, in that way you do when you are newly single and refocused on yourself. I had made it to the semifinals of *Last Comic Standing* and started touring colleges, and I was ten pounds lighter because um hi, breakup diet of cappuccinos and man-loathing. I felt strong and empowered. My independence had been reclaimed!

One day, when I was on my way to perform at a school in Boston, I received an email from Pete. “Ugh, what does he want?” I said, but I opened it, and the contents made my mouth fall to the floor. He explained that *Kid Farm*, the *19 Kids and Counting* parody we had co-created, written, and acted in while we were together, had been ordered as a digital series.

*Holy fucking shit yesss*, I thought. Pete and I weren’t friends and hadn’t spoken in months, but all I cared about as I stood there at Faneuil Hall, with my silver Blackberry in one hand and a carton of fried clams in the other, was the opportunity to make more *Kid Farm*.

When we filmed a month later, it was almost sociopathic how easily Pete and I were able to disconnect from any complicated feelings and plug in to making the show.

We didn’t get caught up in stilted small talk because we couldn’t. We were there to supervise, to oversee. It wasn’t about Mommy and Daddy and their issues; it was about our Kid … Farm. Any awkwardness had evaporated, and what was left behind was sacred: a joining of comedic forces. I was no longer in the uncomfortable position of being Somebody’s girlfriend, capital *S*. I was just a comedian, making comedy with other comedians.

Through that experience, followed by years of increasingly comfortable dinners and trips to the Grove, Pete and I became good friends. Not friends *with a past*, just buds. “We’re like Jerry and Elaine,” Pete concluded. It was true. I was dating my then-boyfriend, now-husband, Dan, and Pete was about to meet the love of his life, Val. I was doing comedy full time at this point: writing for TV, shooting the MTV comedy series *Girl Code*, and starting to headline clubs around the country. We had simply moved on. So when Pete got his talk show on TBS and asked me to write for it, I said, “Yes.”

Then, when *Crashing* came along and he asked me to write for it, I also said, “Yes.” However, while writing on season one, my acting bug bit me hard. When I had first started stand-up, I’d thought comedy purists didn’t want to do anything as frivolous as acting. Even though I had studied it in school, I thought it was embarrassing to admit I had a legit interest in pursuing it.

But after moving to Los Angeles, I began auditioning more and taking said auditions seriously, instead of deploying my previous defense mechanism of not memorizing lines because “They’re not going to pick me anyway.” I got callbacks and tested for an NBC pilot, which was flattering, but I yearned for more. Friends with whom I had started stand-up were landing not only recurring parts but lead roles as well, so I worried that I was “slipping behind.” I fantasized about booking, about being the needle that gets plucked from the haystack.

Before we began writing season two of *Crashing*, Pete told me there was likely going to be a story line about a comedy relationship between Pete and another gal stand-up.

Pete explained that while he didn’t think I was right for the role of Ali Reissen, he would like to find another way for me to be on camera. After a few nights of stress-eating Postmates, I pushed through and went back as a writer, optimistic that another role might arise.

Two months later, they started auditions for Ali, and I was shocked when my agent sent me an appointment time. At that juncture, I had been gunning for a smaller part I had written into one of the episodes. Plus, they were auditioning a ton of people, many of whom were established actresses, and I thought, *They’ll go with a famous person. That’s what always happens.*

At the end of May, I was in New York, and I hadn’t heard anything back about my audition, so I assumed that it was a very dead end. I sent my manager an email: “What’s going on with *Crashing*? Am I done writing? Do I have to buy a plane ticket back to LA? I need to know what to do with the rest of my summer. I have a life, I have a husband … I have a dog!”

Just then, I got a text from Pete, who was not in the office that day. “Can we go to dinner when I’m back?”

I placed my phone on the desk and nudged it away from me, like a finicky kid pushes peas around on his plate. “Ew.”

I texted my manager: “Pete wants to take me to dinner to tell me I didn’t get the part.” I even told my office mate that I didn’t want to — and I quote — “split fucking calamari to talk about how Kirsten Dunst is a better fit.” (I don’t even think she auditioned, but that wasn’t the point.)

Blood rushed to my face and I started pacing. Then I sat. Then I paced.

Half an hour later, I received what will go down as one of the most pivotal and exciting text messages of my lifetime.

Manager: “I think you’re going to enjoy that dinner.”

I dropped my phone on the floor and fell to the ground crying, like I was at a tent revival and the preacher had just told me, “You’re saved, child.”

I got the part.

A few days later, the emotional wounds of ’09 crept up on me when I heard through the grapevine that a comedian I knew, upon finding out I had gotten the role, said something to the effect of “Jamie only got the part because she and Pete used to date.” I tried to remain calm, unscathed by this sexist notion. “But … I had to audition like everyone else,” I defended to myself. I called up a friend, who insisted, “You got the part in spite of the fact that you used to date, not *because* of it.”

I knew she was right, but I gave in to my feelings of self-doubt. They whirled around and enveloped me, like a tornado sucking a rickety barn up into its vortex, with a few confused sheep left *baaahhh*-ing down below. My brain grew weary, until I remembered a helpful You Are a Badass quote: “What other people think about you has nothing to do with you and everything to do with them.”

I began to focus on, and appreciate, the fact that even though we didn’t work as a couple, Pete and I worked at *work*. I was about to be an actress on HB-motherfucking-O, telling the story of a determined female stand-up helping a male stand-up navigate the rough waters of comedy.

With this shift in perspective, I gathered myself and did what any feminist comedian workhorse would do: I put myself on a train to Philly to go record my comedy album and bought myself a lobster dinner before my first show because, apparently, I eat shellfish at every career milestone. As I poured liquid butter over my giant sea roach, my head cleared, and I thought, *Fuck it. I* am *a badass*.

*Jamie Lee plays Ali Reissen on HBO’s* Crashing. *Her debut book,* Weddiculous: An Unfiltered Guide to Being a Bride, *is now available.*