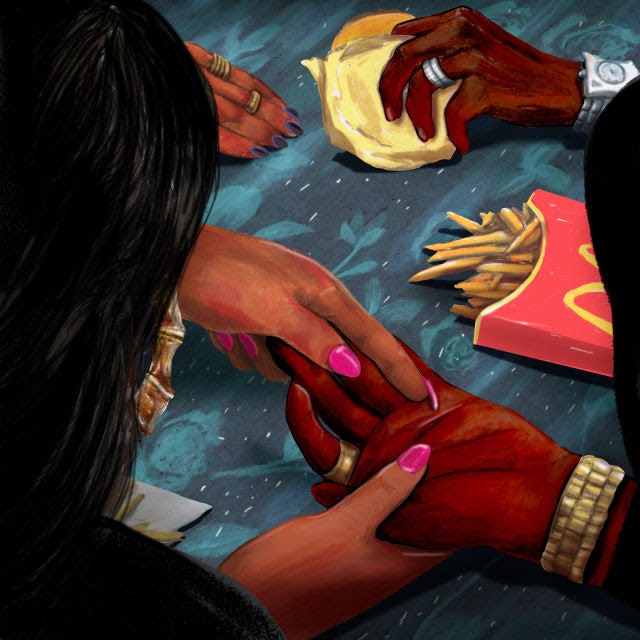 Nineteen eighty-four. That was the year my mother discovered she’d given birth to a two-headed monster. Me and my sister. That was the year we turned fourteen and fifteen. We were only one year apart, Irish twins. Like real twins, we moved through the world as one entity. We spoke in code. We dressed in each other’s clothes. My mother referred to us as “the girls.” We didn’t look very much alike, but our voices were remarkably similar. When my father called the house, he couldn’t tell which of us was on the other line. He confused our names so regularly that it became a kind of new, conjoined name. *D’anlucien*. Or *Lu’anzy*.

We hadn’t always been that monster. For my mother, an experimental poet, an unreconstructed socialist who had raised us on the poetry of Bernadette Mayer and the music of Patti Smith, what we became in 1984 was a particularly pointed bad joke. As a white woman raising black children, she’d been righteous and conscious, trying to raise two strong black women. She’d surrounded her daughters with powerful black women, godmothers and aunts, womanist trailblazers. She gave me a copy of (1) to read when I was ten.

We weren’t coming out the way she’d planned. At those readings she dragged us to at St. Mark’s Poetry Project in New York all the way from our home base in Boston, we spent our time not listening and instead twisting our Barbie dolls into increasingly pornographic positions, using our little brother’s GI Joe as their soul mate. We found the poetry readings weird as fuck — what kind of gibberish were they spewing up there? All her poet friends seemed drunk to us. We sat side by side in at a dark table at the Ear Inn, sipping our Shirley Temples, giving my mother’s bohemian friends the stank-eye.

My mother looked at us across a table and said, “I don’t think I’ve ever encountered two meaner girls.”

Nineteen eighty-four was the year we discovered we could use Jolen facial hair bleach to put gold highlights in our hair. My sister had worn her hair in an Afro when she was young and beaded cornrows for a few years in the early 1980s, but now she used a Revlon five-minute relaxer. In our mind, Afros were for transracially adopted black kids and tragic mulattos (the ones whose white mothers didn’t know how to do their hair).

We fancied ourselves amateur psychics and started our own two-member club called the Prediction Club. We liked to predict the future. We predicted we would be rich someday and leave all this behind.

The things we rejected: whiteness and poverty. We associated whiteness with stringy hair, “tore up” fingernails, high-water, no-name jeans, ripped sweaters, weird poetry, lack of style. We associated blackness with wealth, rap music, gold chains, high-priced sneakers, Polo by Ralph Lauren. Blackness was capitalism. We wore our gold hoops in our ears, nameplates on chains around our necks, sweaters with the price tags still hanging off.

Nineteen eighty-four was the first year we watched a lot of BET: *Soul Train* and *Video Soul*, where we were mesmerized by the host, Donnie Simpson with the light eyes. Fuck the hippie shit. We wanted to be like the girls in the rap videos, the ones hanging off the rich rapper’s arm. We wanted to languish in a Jacuzzi, drink Moët, wear bikinis, and writhe around, our bodies on full display.

My sister’s best friend that year lived in the city — a big-boned white girl who became the source of our wildest escapades. We’d known that white girl all our lives. Her parents were friends of my mother’s who had been part of the early gentrification of Boston’s South End, andin the liberal spirit of the times, they had enrolled their daughter in the local all-black public school.

The social experiment had been, depending on who was looking at it, either a terrible failure or a wild success. Their daughter had adjusted perfectly well to being the only white girl in her school. So well her parents didn’t quite know what to do with her. Though the neighborhood around them had grown wealthier and whiter as it gentrified, their youngest daughter had grown more — ahem — culturally alienated from her origins.

Her parents had given her a highbrow, androgynous, literary name, but her school friends pronounced it “Orten.” Orten could cornrow hair with the best of them. Orten liked five-finger discounts. Orten said she could never imagine kissing a white man. Orten always had something on layaway.

Once we’d realized our mother — with her poet salary and her Che Guevara dreams — wasn’t going to buy us all the merchandise we wanted, we developed an impressive work ethic. We clocked hours every week bagging groceries, scooping ice cream, handling fruit, and, in the summers, working as secretaries. We lied about our ages. We changed jobs with the seasons, looking for the best hourly rate. We spent our money exactly as we made it. We needed to pay for all those clothes we had on layaway.

My mother eyed us with increasing horror. She sighed and turned back to her Olivetti, where she banged out poems and chain-smoked Marlboro Lights. She set us loose on the world. What else could she do?

Winter of 1985. I was fifteen. Hip-hop was exploding. Doug E. Fresh and the Get Fresh Crew were on constant play on the city’s black radio station, WILD. They came to town that winter for a much-anticipated concert at the Lansdowne. A little bit of New York City was coming to our second-tier city. It was our kind of poetry reading.

Four of us went together that night: Me and my sister, Orten, and P, a pretty brown-skinned girl who always wore red lipstick. I don’t really remember much about the performance itself. It has since faded into the backdrop for what came later, when we were walking to the subway station through the dark cold night.

It was just like in the music videos — a black stretch limousine pulled up beside us and the window rolled slowly down. The star of the show, Doug E. looked out at us while the others inside behind him nodded their heads in approval.

It was strange to see Doug E. Fresh up close, without the distance of stage or screen. He looked ordinary, baby-faced, kind of goofy — like the Herb you’d be friends with in math class but would not consider dating. He asked if we lovely ladies wanted to party. We didn’t hesitate and climbed inside their limo. They were all there — Slick Rick and the Get Fresh Crew.

The driver cruised back past the club, where the concertgoers were still filing out of the club, loitering in clusters outside. Somebody, maybe it was Orten, asked the driver to slow down. Then each of us girls took turns standing up and sticking our heads through the sunroof, waving at the people who stood out in the cold. When it was my turn, I felt the freezing wind on my face. We were almost past the crowd. I caught the startled eyes of a boy I knew, the light-skinned kid named Rae who all the girls thought looked like El DeBarge. He was standing on the curb, bundled up in a parka. He looked suddenly small and young to me as he lifted his hand to wave at me moving past.

We drove through downtown Boston. The rappers asked if we were hungry. Yes, we were hungry. Doug E. Fresh said he’d take us out to dinner. It sounded grown-up and glamorous — a celebrity wanted to take us out to dinner. He brought us to McDonald’s. We stood around in the bright lights waiting for our order number to be called. Some of the employees recognized him, and he gave them his autograph on a napkin. We didn’t eat there. We carried our bags of food across the street to the Park Plaza Hotel, where the rappers were staying, and followed them into the elevator. Up on their floor, Slick Rick said he was going to his own private room to do his business. He bid us farewell. We followed the others into their suite. We spread our McDonald’s food on the bed, and we all sat down to eat.

The boys seemed shy. One of them picked up the remote control and turned on the TV. He chose a movie from a list. *Perfect*, starring John Travolta and Jamie Lee Curtis — the one where Travolta plays a magazine reporter from *Rolling Stone* who travels to Los Angeles to write an exposé; he’s trying to show that fitness clubs are the new singles bars. We watched the whole movie together, chewing our burgers and fries, sipping our milkshakes, occasionally making wisecracks about what was happening on screen.

Somebody took a Polaroid of us that night sitting with Doug E. Fresh and the Get Fresh Crew on the hotel bed. I don’t have the picture. One of the other girls took it home with her, maybe Orten, and we don’t know Orten anymore, so I am left to imagine the photo: a group of baby-faced boys sitting on a flowered comforter in a brightly lit hotel room surrounded by McDonald’s wrappers and a group of underage groupies.

After the movie was over, my sister asked Doug E. Fresh if he wanted her to read his palm. She said she could tell him his future. He said OK. She held his hand in hers and gently touched the web of lines, frowning, nodding, while the rest of us, the boys and the girls, watched in a strange, fraught silence. It was as if we all believed she held special powers. Doug E. Fresh looked nervous. But when she spoke, she told him that he would live a long life, that he would have many children and find love and God and wealth. He seemed pleased, relieved, to hear her prediction — and then the others wanted her to read their palms too. She went around the room and read each of their futures. And then it was over. We thanked them for the food and the Travolta flick, and then one of them, not Doug E., led us downstairs and helped us catch a cab out front.

My mother was still awake when we got home. It was after midnight. The orange tip of her Marlboro Light glowed in the darkened kitchen. She stared at us when we came in the door, her two-headed monster — her socialist dream-crashers, Lu’anzy and D’anlucien. She asked us where the fuck we’d been. She wanted to know, at fifteen and sixteen, how bad we’d been. We were too excited to lie. We told her the truth: that after the show we’d been picked up by the most famous rapper in America. That we’d gone for a ride in their limousine and then they’d taken us back to their hotel room, where we’d sat around on their bed with them, eating McDonald’s and watching *Perfect*.

My mother stared at us for a moment, trying to decide whether to believe us. Then she snubbed out her cigarette and laughed a little and said, “Wow, wow.” She seemed strangely impressed by the limo detail.

At school the next week, I offered up none of the details. The rumor had already spread about what had gone down. Everyone claimed to have seen us looking out of the limo’s sunroof. I let them imagine another story — the one where the rappers got freaky in the back of the limousine, where the underage girls got drunk on Moët in a hotel Jacuzzi, the one where they’d been nasty boys and we’d been nasty girls and there had been cash and gold for miles. Nobody knew the difference.