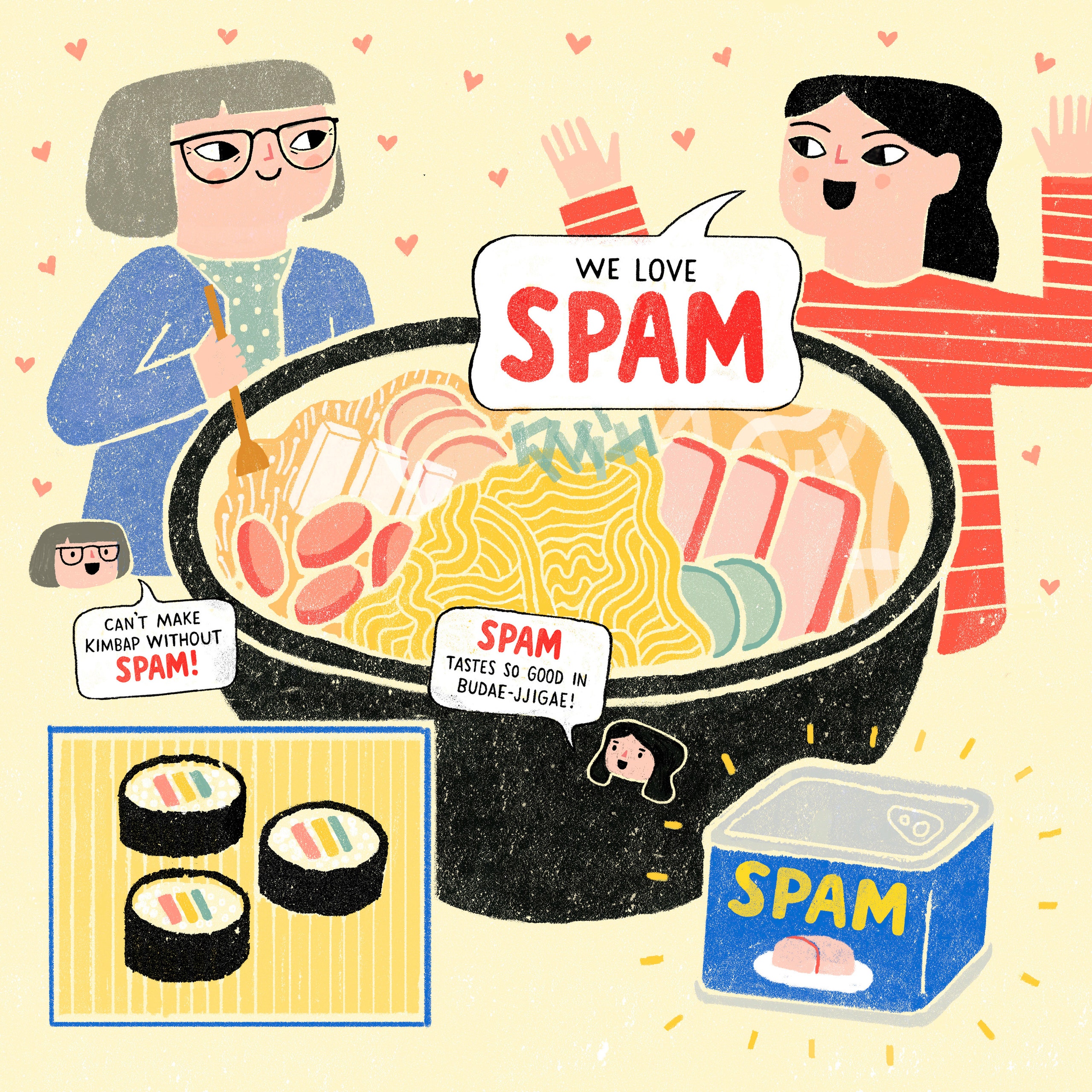 I am skilled at classical French cooking. I have a Higher Certificate from the Wine and Spirits Education Trust. I also, however, love Spam. (In case you were wondering, Spam pairs well with Gewürztraminer.) I kept kosher for a few years (1)). When I broke away from the dietary laws — because I was quitting smoking and could not maintain so many forms of self-abnegation at once — the food item I cheated with was Spam.

It symbolizes both the part of me that is Korean and the part of me that is American — two identities that are difficult to unite. More important, I associate Spam with relaxation, being present, and not worrying about what you can’t control. Why? Because Spam evokes beaches, pineapples, funny tropical shirts: i.e., Hawaii. It’s the one place in the world where I can be un-stressed-out, and it happens to be the only U.S. state that loves Spam as much as I do.

Mainland Americans have given me no end of grief for this. First rule of Spam Club: You never talk about Spam Club. Otherwise, you risk social death. Case in point: When I was at university, my friend Mike told me that his freshman-year roommate threw out Mike’s Spam and gave him $5 to cover the cost. But Mike and I both had a really good excuse for this embarrassing proclivity: We’re of Korean extraction, and Korea is the (2)

How did Korea become hooked on the laughingstock of all supermarket products? The meat that was so ridiculous that (3) created not only a sketch around it but an (4)?

A bit of history: Spam has been manufactured by the Austin, Minnesota-based Hormel Foods Corporation since (7). It became widespread in Korea during and after the Korean War (1950 to 1953), when the U.S. government shipped loads of Spam to Korea, at a time when fresh meat was hard to come by. Korea was by no means the only beneficiary of this largesse; during and after WWII, the U.K. also turned to Spam to supplement monthly meat rations. In fact, articles on Spam’s role in wartime Britain bear titles such as (8) (9) are some nostalgic British WWII-era Spam recipes.) Unlike the U.K., however, where they poke fun at Spam, Korean Spam consumption was unironic.

While modern-day Brits no longer regularly eat Spam, it has remained part of the diet in Korea. In September 2017, Korean sales of Spam reached (10). And Spam’s Korean co-distributor, Cheil Jedang, announced in January that its (11) was Spam. In my day, the tins were usually packed in velvet-lined boxes and wrapped in white satin ribbon.

My mother, a biochemist with a particular fear of foodborne illnesses, was virulently anti-pork, making it sound like a veritable menagerie of revolting organisms — trichinosis, tapeworm, hepatitis, all reproducing at exponential rates. Yet we always had Spam in our pantry.

Apparently Koreans are now accepting their love of the lowbrow: David Chang, the Michelin-starred Korean-American chef, (5).

Spam’s enduring popularity in Korea surprises me, because I had assumed Koreans were now prosperous enough to abandon any food item that you need a key to open. This is a common phenomenon, though — hardship habits die hard. Some Germans raised on the substitute coffee product “Ersatzkaffee” — either during the Second World War or subsequently in the former GDR — occasionally used the bad stuff over real coffee much longer than was necessary. Wartime food is a symbol of survival.

I am constantly surprised by how many non-Koreans have never seen Spam, so I’ll describe it. It’s like gefilte fish but made from compressed processed ham. As with gefilte fish, Spam is surrounded by a clear gelatinous amniotic fluid. After you open the tin (now it’s regular pull-tab, but when I was growing up, you needed to twirl open the top with a key), you hit the bottom until the Spam block pops out, though most of the time you need to go around the edge with a knife. When it exits the can’s vacuum seal, it makes a slurpy noise, like when you push cranberry jelly out of a tin.

Whenever we moved house — which was pretty often — the first meal in our new home, usually eaten on moving boxes instead of tables — was Spam and instant ramen.

Spam is already fully cooked, but in my house we usually fried it anyway, cut into narrow slabs.

When my family lived in the United States, my parents were really into long road trips to national parks, which I enjoyed about as much as those kids did in the movie N*ational Lampoon’s Vacation*. And my parents must have been victims of *Manchurian Candidate* levels of Midwestern American suburban brainwashing, because they really did sing folk songs in harmony while driving — “I’ve Been Workin’ on the Railroad” comes to mind.

At the end of a long day in the car, we’d stay in these cheap hotels, where my mother would violate the hotel fire code — and every basic tenet of the social contract — by secretly making rice and frying up Spam right on the floor of the hotel room. She’d use a rice cooker and hot plate THAT SHE HAD BROUGHT FROM HOME.

On one such occasion, I spilled my Spam and rice all over the hotel carpet, leading her to yell at me, “This hotel will never let Oriental people stay here again!” To which I replied, “Erm … why should they, really?”

So Spam, in other words, evokes all kinds of memories: changing house, boring road trips, and my cheap-ass family.

There is no substitute for Spam. When I lived in France, where Spam was unavailable, I was forced to resort to a depressing Danish knock-off. A few years ago, I went with some Korean-American friends to a trendy Korean restaurant in New York (not David Chang’s, a different one). We ordered the aforementioned budae jjigae, the army stew, so named because it was invented using random U.S. Army-provided rations, like Spam, hot dogs, and waxy government-manufactured cheese. This restaurant’s upscale version, however, was made with homemade ramen noodles, high-quality mozzarella, and what looked like Spam but was too fancy.

“I’m really not into this artisanal Spam,” my friend said, grimacing and poking at it with a chopstick. I agreed. It felt wrong to dress up a poor man’s dish, like making puttanesca sauce with caviar or cottage pie with chopped truffles. Which — what am I saying? — probably does exist somewhere. I’m not a purist about food, but I do object when I feel that people are just missing the ontological essence of a dish.

I needed the real thing. The healthy versions are not nearly salty or greasy enough, and the salt and grease are precisely why Spam goes so well with rice. By far the most common form in which I’ve eaten Spam is in the form of kimbap. Imagine maki rolls — the kind of sushi that is rolled into logs and cut into small cylinders — but instead of fish, they contain vegetables, a thin omelet cut into strips, and, in our house, Spam.

Kimbap wasn’t really dinner food. I associate it primarily with picnics. In Korean school, kimbap was, without exception, the food that everyone’s mom packed for their kids’ school-picnic lunches.

As a sullen teen, I hated those picnics with a passion you can only imagine. They were hokey affairs with long hikes and teachers screaming at you about what a nice fucking day we were having. Invariably, some tool would bring a guitar, and everyone would be forced to sing. To this day, I hate acoustic guitar.

But then there was my Spam kimbap. It was a reminder that this hell passing for a picnic was only temporary, and that somewhere out there was a mother with whom I battled daily but who had nonetheless gotten up at dawn to make me Spam kimbap.

My mother, in addition to the frugality, had a psychological hang-up about food. She hated cooking and resented that it was considered the domain of women. Cooking symbolized her wasted education and the career sacrifices she had made for her family.

Perhaps because of her hostility toward cooking, I hated food until age twelve or so. I remember wishing it were possible to take a pill instead of having to eat dinner. Consequently, I looked like a famine victim.

When I hit puberty, though, my metabolism kicked in, and I developed a normal teenage appetite. This concerned my mother. When I was five-foot-six (167 centimeters) and my weight crept past the 115-pound mark (52 kilograms), she put me on a kale-juice diet. And trust me, kale was not easy to find in those days. Yay, body dysmorphia.

And yet, paradoxically, she also served me greasy, salty, insanely caloric Spam, always fried. Why, you ask? Well, isn’t it obvious? Fried foods are always evocative of love. The smell of frying itself is mouth-watering — be it Spam, tempura, croquettes, or chicken drumsticks.

Even people who don’t like you can make a sandwich. I mean, what is the office deli platter if not hard evidence of that? But no one who hates you will fry you some Spam.

I remember from those school picnics that some of the other kids’ mothers didn’t use Spam in their kimbap, instead using surimi, that pink fake-crab thing. Surimi — now, that’s bad parenting. Life is too short to have more than one dubious processed-meat product in your kitchen: Let Spam be it.

*Euny Hong is a journalist and author, most recently of* (6) *(Picador 2014).* *Her work has appeared in the* New York Times, *the* Wall Street Journal, *the* Financial Times, *the* Times of London, *and elsewhere. She would like you to follow her on Twitter (12)*.