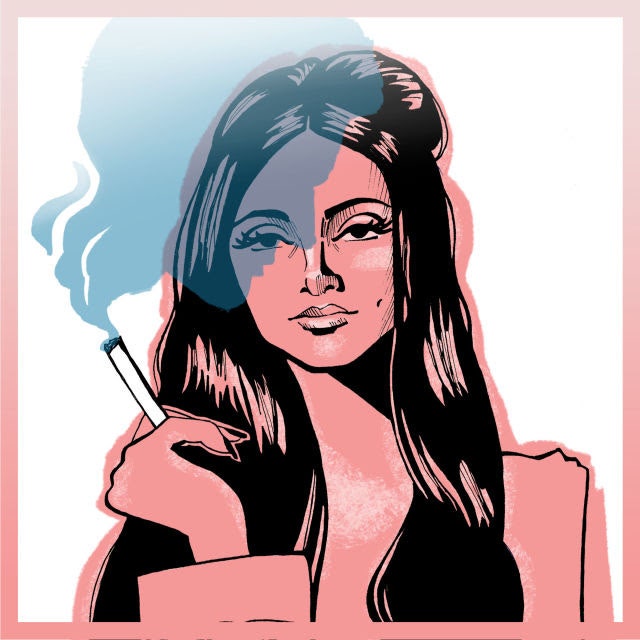 I saw filmmaker Anna Biller’s movie *The Love Witch* during an ice storm — but inside the theater, I was transported to the trippy, rainbow-prism world of Elaine, a spell-bindingly seductive witch with an abusive past. She uses potions and “sex magick” to attract men, but when she gets lust and obsession instead of the true love she craves, the results are lethal.

Biller is fetishistic about aesthetic. She shot both her 2007 cult film *Viva* (an exploration of the sexual revolution’s dark side, in which Biller also starred) and *The Love Witch* on 35-mm. film, using antique three-point lighting techniques that re-create the Technicolor look of classic cinema. She has ten credits in total on *The Love Witch*, including writer, director, producer, editor, and art director. She painted the art on Elaine’s walls, hand-hooked a pentagram rug, and spent every night after dinner learning calligraphy to make an authentic-looking spell book. She also attended pagan rituals for witchcraft research, sewed an entire cast’s worth of Renaissance outfits for a solstice faire scene, wrote original songs, and constructed elaborate color-coordinated sets in the palette of the Thoth tarot-card deck.

*The Love Witch* has the kind of New Age soundtrack I’d want to listen to while bottling a potion made out of a used tampon, riding a white horse, or strip-teasing for my interior decorator’s husband (all things that Elaine does, while dressed up in an enviable wardrobe of psychedelic ’60s/’70s outfits, a nipple-length black wig, and matching cat-eye makeup). I was so under the film’s vintage spell that I started to imagine that the issues of misogyny it deals with were from a bygone era, but contemporary objects like cell phones and modern cars serve as jarring reminders that Biller’s feminist subtext is deceptively current. I talked to Biller about witchcraft, objectification, and representing the female world onscreen.

**Ellen Freeman:** I’ve noticed a growing interest in the occult happening in parallel to this surge of girl power. Do you see witchcraft as a means of female empowerment?

**AB:** I do. The way religions are used is dependent on the concerns of the era; in the ’60s, I think a lot of witchcraft was about people exploring nudity, sexuality, the demonic, the beyond … for exploitation of drugs, and for getting outside of Christianity. I think today, all of witchcraft is very aligned with New Age concepts about inner healing, meditating. People are getting into it for completely different reasons, like female empowerment, women finding their power as goddesses. Elaine says, “Witchcraft saved my life,” so that’s how she feels. One thing I noticed in the rituals I went to is that some of the people seemed very enlightened, but other people seemed really lost and debased. They were trying to find themselves.

**AB:** She’s desperate. In this movie, witchcraft is not entirely positive, because it hasn’t really given her back her life back at all. She’s using it in the wrong way.

**EF:** Her body is the actual altar in the rituals, so she becomes this object of worship. That happens in your film *Viva*, too; the heroine is “set free” from her boring suburban marriage by the swinging sexual revolution and ultimately becomes a sexual object of worship for men. But that doesn’t lead to either of those characters’ happiness.

**AB:** That’s right. It has to do with the desire gap, whose desire is being privileged. have a sexual fantasy of being worshipped as goddesses, but when it actually happens, it’s not the same as their self-worship. It doesn’t contain any human respect. There’s no real love there. Objectification precludes love, right? When you’re an object, you don’t have a consciousness. When you love yourself, you have a consciousness attached to that, and it’s an actual sense of preserving yourself. That’s not the same as somebody taking away that consciousness and just worshipping a body. That’s actually demonic.

**EF:** *Viva* and *The Love Witch* both have a strong feminist subtext, and I’m interested to know what your feminist education looked like.

**AB:** I read a lot of feminist theory. I read a lot of psychology books as well. But I had an epiphany when I was still in school that had to do with creating work from the place of being a woman, on purpose. From the place of trying to create a female consciousness on the screen, in movies that were for women, but that weren’t necessarily didactic or political on the surface; that were made for women’s visual pleasure. I made it a project to do that in my life, and it wasn’t until I came up with that project that making movies made sense to me, or making art in general. I suddenly knew exactly how I was going to make work from then on, and I’ve stayed on that path.

I realized that the majority of movies are made for men. The reason I like classic cinema so much is that so many of these movies were written by women and for women. Some people might find it retrogressive that I’m making films that are more like those Old Hollywood pictures, but it’s because I thought those pictures were better: they were better written; they had better characters (both male and female); they had more humanity in them. It’s not really that I’m trying to copy them. It’s more that I can learn a lot more from those kinds of scripts. But in terms of creating a feminist cinema, years ago I started to say to myself, “What do I really like to watch on the screen? What kinds of images actually produce pleasure for me, rather than anxiety?”

**EF:** How do you try to create visual pleasure for women in your films?

**AB:** Through interior decorating. It’s a statement that, rather than featuring weapons and guns, cars, objects of war and destruction, I’m obsessively featuring lace doilies, tea sets, handbags, false eyelashes, ashtrays, curtains, pillows, domestic things. It’s not that I’m trying to say that women are domestic, but it’s a way of creating a world of objects that feel female. I want to put the stuff that really excites me on the screen, so maybe it excites me to put a beautiful woman on the screen and have her wear beautiful makeup and have her look fantastic. You know, great stockings, great lingerie, great shoes, great handbag. When I’m making films, I’m trying to go more with an emotional current, a gut feeling, an intuition about what feels safe, right, and pleasurable, and what feels unsafe, ugly, and threatening.

**EF:** There’s a real conflict in *Viva* and *The Love Witch* between being a sexy woman and being empowered by that, or being devoured by society for that. In *Viva*, your body was onscreen in, I imagine, some pretty vulnerable ways. How did that experience inform T*he Love Witch*?

**AB:** For one thing, it ruined film acting for me, that’s for sure. I was so objectified in such ugly ways that it just took away all my fun in doing it.

What ended up happening was not just that I was objectified. It was that I wasn’t even really seen as a filmmaker, because the power of a woman doing a sexual performance onscreen is so strong for men that they’re unable to look at her as a creator of meaning. I learned something even more radical in doing *The Love Witch*, which is that even if you’re not on the screen, a lot of men are unable to see women as creators of meaning. That was even harsher in some ways, to realize that I’m often still not given credit for understanding what I’m doing. Maybe that’s partly the reason I make so much — so that people understand that I’m actually a constructor of meaning in a very complete way, so that’s not confused with someone who’s just an object.

*The Love Witch* is all about objectification. It’s about a woman’s life having been destroyed by being objectified.

**EF:** Going forward, do you feel more inclined to make films for the art house milieu, or a mainstream audience?

**AB:** I’m going to keep moving toward the mainstream. I think the more people you can reach, the better. Not all men, but some men, are resistant to what I’m doing. Some men actually really like it, and they’re learning a little bit about what it’s like to be a woman. And that’s incredible, that you could teach a man that through just watching a movie? One thing that’s satisfying for me is, I’m trying to teach my old boyfriends just a little bit. There was this kind of brutal misunderstanding that was always happening, with this weird feeling that they were human, I was subhuman. I was always wrong. I’m a freak. I’m a witch. I’m crazy. That’s why it didn’t work out, because I’m a crazy witch from hell. Really, I’m just a female. Elaine is a crazy witch from hell, but she’s also just a woman, a very ordinary woman.

*Ellen Freeman lives in Portland and has written for Refinery29, Roads & Kingdoms, Mental Floss, Racked, the Matador Network, and more.*