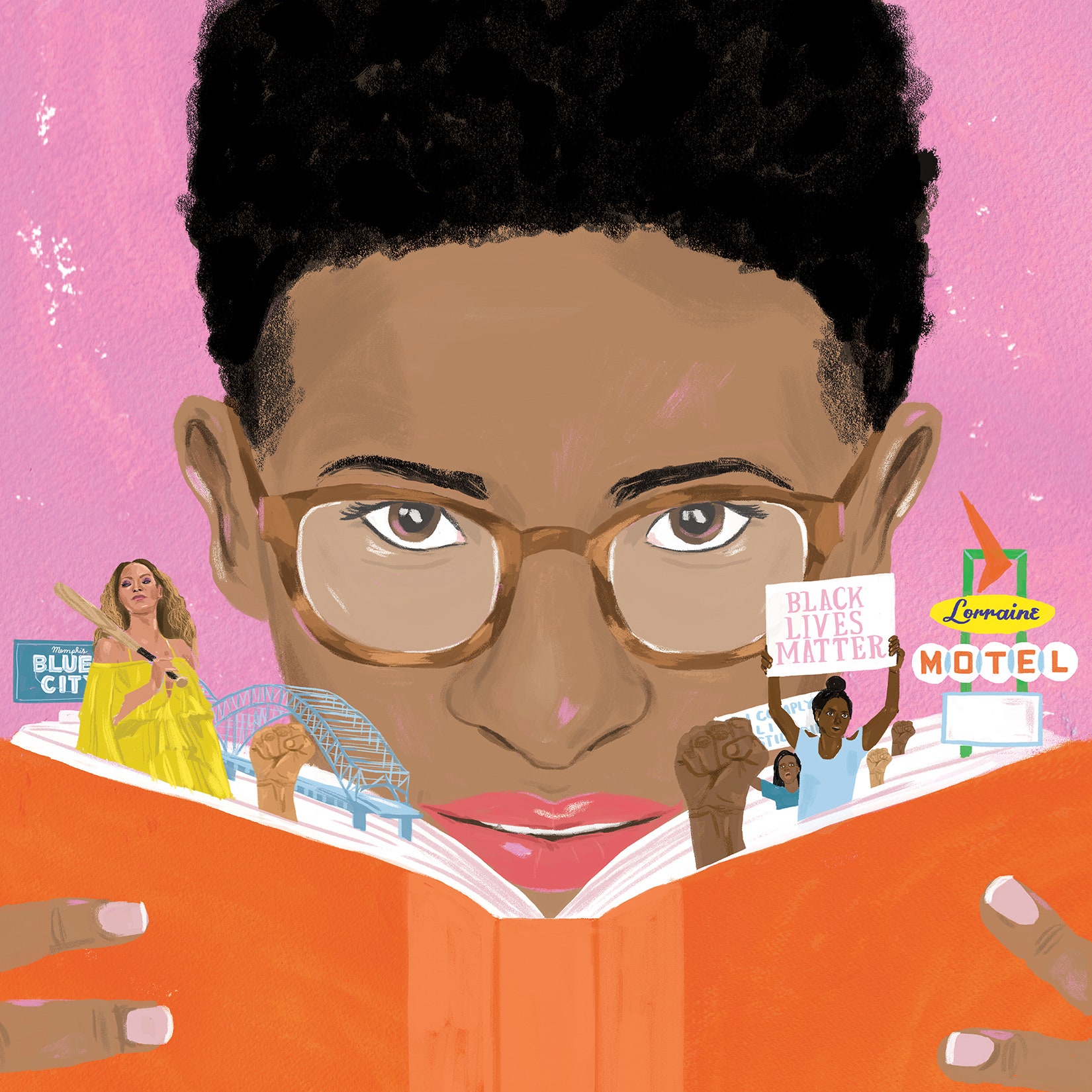 Although we both grew up in Memphis, across a city that isn’t that large, I didn’t find Zandria F. Robinson’s writing until a decade after I left home, when the Internet (1) led me to her. This speaks to my upbringing in the intentionally, explicitly white South. After reading her pieces in *Rolling Stone* on “Formation”‘s engagement with black Southern regionalism, I found her personal blog and her Twitter, where she posts with unrelenting joy about and critiques on pop culture, Memphis life and politics, black music, art, and literature. She is an essential black, Southern, woman writer, sociologist, and ethnographer, which is to say an essential teacher. To study Memphis, to make art of it, is to study an American locus point.

As Zandria writes in the (2) *This Ain’t Chicago: Race, Class, and Regional Identity in the Post-Soul South*, Memphis is “neither Old South nor New South” and “sits at the physical, temporal, and epistemological intersection of rural and urban, soul and post-soul, and civil rights and post–civil rights.” She is also a beloved mentor and (3) of black feminism and popular culture. She is a force for equality and growth in artistic, nonprofit, and academic circles down South and nationally.

Reading her most recent work, (4) nominated for a 2017 National Magazine Award, I see her generosity and her investigation into all that is Southern. Hungry for her father’s country blues and country fortitude after his sudden death, she writes, “I became an ethnographer in part to understand that world empirically, with facts … I always listened, and am still listening, for that world, the formative one that made Daddy.” I finally met her last summer, back home, where we started a conversation, on this city that breaks and bears, that has continued over this past year, over many Old Fashioneds with our friends and families, and eventually in our email chains and Google Docs, which I’m lucky to share here.

__Molly Quinn:__ When did you start to write? Did you feel a responsibility to write about Memphis when you were young, a sense of writing about home?

__Zandria F. Robinson:__ Most of the writing I have done for most of my life has been required, on command, in response to a prompt of some sort, for an assignment, or the turgid kind of writing academics do. Teachers said I was a good writer. *But who isn’t, you liars*, I would think, so I didn’t think of it as a thing that one did per se. Writing had been mechanical for me, not necessarily because I did not enjoy it, but because I did so much of it that it had become like breathing.

The kind of literature I was attracted to, which I took writing cues from, was almost exclusively Southern, and I had begun reading it around ten or eleven. Hurston. Faulkner. Ellison (the Census says Oklahoma is the South). Welty. Poe. So regardless of the prompt, the South, and the black South in particular, was in my writing. It was the viewpoint through which I interpreted most things.

Still, I don’t think I actually thought about home as a thing to be responsible to. It just was. I had traveled and been places, but home was just an unchanging thing. I don’t think I conceptualized the city as somewhere to like or dislike. I didn’t think about living in other places at all, come to think of it.

When you are away from home, though, you become aware of it in a way that can feel painful and exposed, and that certainly happened to me when I started my Ph.D. in Chicago in 2005. I don’t know why I thought I was going to get there and the library was going to have all of the contemporary-Southern sociology that was missing from our country Memphis libraries. But it wasn’t there. And then I was on a mission to write scientifically about Memphis, but I also had this Southern-literary penchant to write about, speculate about, and find out about home more broadly and regionally defined. Zora had Eatonville, I had Memphis, and we both had the black South.

__MQ:__ In your book, you frame your use of the terms “post-soul” and “post–civil rights,” referencing Memphis’s relationship to black American soul cultures, the assassination of Martin Luther King Jr., and the tenuous movements toward justice in the decades since. Do you think we are now in a similarly hinged moment? Will there be a version of your book that comes out 50 years from now and looks at a “post-*Lemonade*, post-Ferguson era”?

__ZR:__ In Memphis, we have been in this hinged moment forever. We are in this hinged moment still. (5), when scores of black people came out and put their bodies in the wide gap between King’s assassination and this still fraught moment, was and is an articulation of that. We will be in this moment at least for this lifetime and our children’s lifetimes. And any progress made will be made by the people of Memphis, not the municipal administration and “leaders,” as it were. All movement is not forward progress.

The thing of “posts” is that they aren’t necessarily describing an end to a previous condition. They mark a shift, a rupture, a remix of the same condition. All in a loop. And for black people, that looped condition is the condition of being subject to racial oppression. People bristle at historical-to-contemporary comparisons like Emmett Till to Trayvon Martin, or women survivors of rape in the Jim Crow era like Recy Taylor to the women raped and assaulted by Daniel Holtzclaw, but the differences are in scale, or degree maybe, but not substance. We are in the same time. “Post-slavery,” for instance, might mark the legal rupture of a particular system of enslavement, but we lived and live on with its violent remixes and shifts.

> All movement is not forward progress.

__MQ:__ In the safe, segregated white community where I grew up in Memphis, we were taught by the white adults around us that Memphis was a place to be scared of. Memphis’s *The Commercial Appeal* is reporting that 2016 has been “one of the bloodiest years Memphis has seen.” Since I began to write about Memphis, I’ve pored over our violence statistics, but those numbers tell many stories. I feel that Memphis is a city of grief. Is it a city of violence?

__ZR:__ Everything inequitable is violence. I find these stories disingenuous always, sensational, a way for white Memphis to point to the brutality of racial others to shift attention from its insidious violences, the slow bloodletting it engages in every day. The violent bloodletting of segregation. Of unpunished police murders of citizens, where our souls bleed and our blood pressure goes up because we are reminded that we can be killed with impunity. Of bloody, bloody school closures ripping neighborhoods apart. Of the blood and violence of the county lockup. Of the cutting of bus routes, bloody people waiting to get where they are trying to get to stop the blood from coming so fast. Of the fundamental lack of mental-health support services. Of women beaten and beaten by men and then, when they are murdered, suddenly things are now “bloody.” Of violently substandard housing. Of scores of untested rape kits. I imagine whites must have been taught that this place, with its rampant violences against black adults and children, was one to be afraid of so you wouldn’t look to see who the real monsters were.

__MQ:__ In a (6) on your blog, which takes on your academic-career ascension and your family’s Memphis roots, you write about your hopes for “the urban intellectual juggernaut that I had always wanted.” Do you think Memphis can be this urban intellectual and creative center? Should it?

__ZR:__ I think Memphis can and should be an urban intellectual and creative leader, but I think the people who are best equipped to make it so are also living some pretty precarious lives while trying to create. And institutions simply aren’t equipped or interested, so there is no infrastructure here of any sort for that kind of work, despite the creation of multiple spaces to consume art and the creation of spaces for people who are already privileged to get more support for their work — work which is often middle of the road in terms of its push toward anything different. This is particularly egregious given that the people who can and should be creating the most, the 65 percent, are the most affected by this absence of infrastructure.

The kind of insurgent artistic, creative, and intellectual work that the city and its people call for will ultimately take place on the lyceum circuit, at the salon, the block-party festival, in the networks of artists and intellectuals. Those will be the spaces that will revive and re-articulate Memphis as this kind of vanguard.

As for the future of the city as indicated by the development activity of this moment, Memphis is not so different from other US metros. All cities are being remade for the middle class/upwardly mobile young, for the white, for the liberal and acceptably (apolitically) multiracial, and Memphis is no different. A couple of people said, “Watch out, Memphis is going to become Oakland.” But in a city with so many black people (whose numbers are not declining) and sooooo much land mass, it simply all can’t be gleamingly gentrified. So structurally what we will see is the continued and perhaps accelerated growth of racialized wealth, income, and space disparities.

And I do not mean simply between the very wealthy and the very poor, but rather more the gap between the working and lower middle classes and the upper middle classes. This will exacerbate the already ridiculous arms race to get into the “best” public schools in the city, which already in some ways function as private or semi-private entities. I do think, however, that black artists are keenly aware of this shift and are creating and looking for ways to collaborate in order to move underground, to stay alive, to stay ahead, to grab whatever space, which is really how we have always done.

*Molly Quinn is a poet and essay writer from Memphis, Tennessee. She lives in New York, where she serves as the director of public programming at Housing Works Bookstore Cafe.*