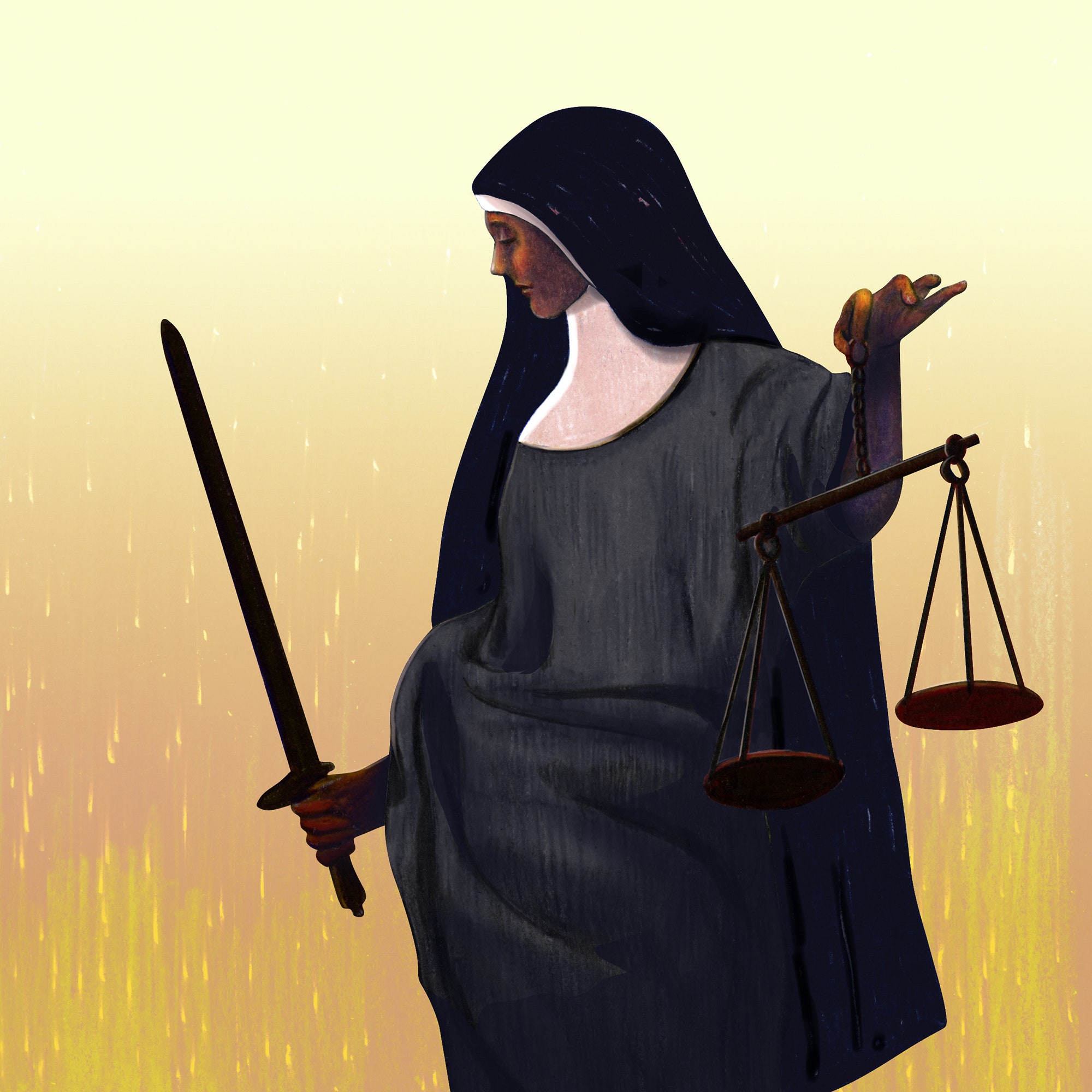 My father was briefly a federal prosecutor in the ’70s: he worked with the team that brought about the earliest anti-racketeering cases that eventually took apart the New York City mob. “That’s why I never put your birth announcements in the papers,” my mother would tell us, casually. “The FBI told me not to.”

I’m not sure if that is true or not, but stories about the last days of the mob in the ’70s and ’80s have always interested me (and lots of other Americans. See the enduring popularity of *Goodfellas*). In all those stories, though, I hadn’t heard about Arlene Violet until recently. When I first read about her, I felt cheated, because Violet is such a fascinating figure: She is a former nun who became the attorney general of Rhode Island, at a point when that state was nearly totally controlled by the mob. She ran on an anti-corruption policy and promised her constituents she would prosecute the Mafia, a mission that sometimes put her in danger but resulted in the prosecution of eighteen mob figures and the eventual departure of the Colombian drug cartel from Rhode Island. In addition to her work on mob cases, she also innovated the use of closed-circuit testimony in sexual-abuse and rape cases, making it easier for abuse survivors to testify in court without the risk of intimidation by their abuser.

*Why isn’t this woman’s life story a movie?* I remember thinking. *Shouldn’t, like, Melissa McCarthy or someone have the rights for this?* Violet has come to light more recently in the podcast * (1)*, which chronicles the mob in Providence. That show only scratches the surface of her story, though. We spoke over the phone, on an especially rainy Tuesday, and she told me about her career in government and her love of writing and theater.

__Kaitlyn Greenidge:__ How did you get involved in politics?

__Arlene Violet:__ Well, I was a nun for 23 years. I was involved doing inner-city work … Six of the nuns, we would live in the poorest neighborhoods in Rhode Island. Back in those days, they had a thing called “caveat emptor,” so if some poor person bought a refrigerator and it didn’t work, that was too bad. It was buyer beware, OK? The first thing I wanted to know: Was that actually the law? And if so, how could we change it?

My religious order, Sisters of Mercy, gave me permission to go to law school, because I really wanted to do public-interest law. Living in those neighborhoods, which were high-crime neighborhoods, the people that were victimized had absolutely no rights, and would be dragged into court three or four times. Then they would show up the fifth or sixth time and be told, “Oh, we disposed of that matter …” or “We had a plea bargain.” And they had absolutely no input into the case, which really undermines all victims. I didn’t think that was particularly a good idea.

I did public-interest law because of the crime, and the lack of rights that people had who were poor, that were victimized, and the fact that the organized-crime center of New England was run out of Providence, Rhode Island. There was a lot of public corruption, and the Columbian drug cartel moved into this very poor area in Central Falls, Rhode Island. The only person that could do anything about that was the attorney general, because you are the prosecutor in the state.

__KG:__ Did you know about the crime and lack of rights before you became a lawyer, or was this something you discovered as you worked in the neighborhoods?

__AV:__ It was an ongoing journey. I simply learned when I was a young nun, before I even went to law school, problems that the neighborhood had in terms of being victimized. Then, of course, after I went to law school, I really started to pay attention to what was going on. I was still a nun at the time, and I went to my religious order and said, “You know, I think this is an unmet need!,” because that’s what we were supposed to do as nuns. We were just thought of to respond to the unmet needs. They said, “It sure is. If you want to run for attorney general, go ahead.” So, I ran.

The first time I lost. By 43 percent of the vote. The second time I ran, the Church law changed and gave more power to the local bishop. He told me that I would have to leave religious life if I ran for attorney general. For me it was a choice between keeping the title of being a Sister of Mercy but walking away from the core purpose of what our lives were supposed to be about, versus really responding to the unmet needs. So I left the order. I got elected that year.

I got involved in politics not because I particularly like it. It was really the conduit to make changes.

__KG:__ It sounds like what drove you to become a Sister of Mercy in the first place was an interest in public service.

__AV:__ Yes. I am 73 years old now. Back in those days, when I was a youngster growing up, what would happen is, people would get married, if they were lucky enough to go to college, right after college, or after high school, or whatever.

While that was fine, I always wanted to do something. I saw the nuns that I had in school as the people who were stepping out there to try and make changes. Even the nuns that taught me in high school, I’d see them later after school, and they were shaking down the butchers and the bakers for food and meat, day-old bread, so they could give it to poor people. They were really the doers. I saw them doing things in society.

__KG:__ What were the things that you tackled during your time as attorney general?

__AV:__ We had eighteen mob prosecutions. The Columbian drug cartel finally moved back to Miami because we were intercepting drugs left and right. With the organized-crime prosecution, we prosecuted number five and four of the Rhode Island mob, and the feds got number three, which was good. I certainly prosecuted a lot of public corruption cases.

> It was a choice between keeping the title of being a Sister of Mercy
> versus really responding to the unmet needs.

__KG:__ Were there ever times you were afraid, going against the mob?

__AV:__ Well, the mob would never hurt you unless it was by accident, because it would bring more heat on them. But with the Columbian drug cartel, in Medellín, they have a pop-a-cop program. I learned that I was on a list and I had bodyguards 24-7 for a while.

After a while, I was giving a talk at the Marriott hotel here in Providence, and right before my speech, I decided I’d go to the restroom. A police officer followed me. Actually, it was a sheriff at the time, followed me to the door. He waited outside. When I walked in, I said, “Gee. You know, if I wanted to kill me, I would be in here! Waiting for me!” You know?

After I gave that talk, I called up the superintendent of the state police. I said, “You know, I really don’t want this protection anymore, because it’s silly. If they want you, they’re gonna get you.” After much disagreement on the point, eventually the detail came off. So I could save taxpayers money.

__KG:__ Wow. You are brave. You’re really brave. I’m also really struck by the fact that after you’ve lived this extraordinary life, you’ve written about it and even made it into a musical. Is that right?

__AV:__ Well, yes. Except in the musical, the names were changed to protect the guilty. I saw it as an opportunity, really. It was funny, but it was also a drama. Critics liked it a lot, because they saw why sometimes people make the choices they do, particularly in the mob, like *The Godfather*. It has all these conflicts in the piece. I wanted people to realize that they are not stereotypical. They do some good things. I wanted people to see that it’s not like a single dimension, but that these people have problems, and how they make their decisions, etc.

__KG:__ Thinking of people as three-dimensional, was that always in the forefront of your mind as attorney general, or was that something that came as you thought about it and you worked with people?

__AV:__ They were like one-dimensional in my mind when I first started. What would happen is a mob informant, I would meet them. They were mob guys themselves. Because I had meetings with them, I got to see a different dimension. They still got prison sentences. They would say, “You’re no Sister of Mercy.” When they knew they had to go to jail anyway. At least I got close enough to the situation where I could see why they made the choices they made. It helped me . It helped me interact better with them too.

__KG:__ Which of your accomplishments as attorney general are you most proud of?

__AV:__ Standing up to what I call “the network.” A crazy example, when I first went into office, I saw that after work the prosecutors would sometimes go to these “mob-owned” restaurants and have their drink tab or even their food tab picked up!

I told them they couldn’t do that or they’d be fired. The General Assembly heard about it, and they started kicking around. This was like two months into office. They wanted to impeach me, because I shouldn’t be telling them what they could do after work. Of course, my counterpoint to that was “You’re a prosecutor 24/7.” No wonder the people in the state think that the mob gets away, literally, with murder. Why shouldn’t they think that when they see prosecutors being wined and dined at these mob spots?

What I am most proud of is, even though I got beat up every day, I just smiled and kept doing it. Just doing what I thought needed to be done.

__KG:__ For so many people, that’s what scares them away from standing up for what’s right. How do you get through that?

__AV:__ Well, I had, of course, the spirituality of the Sisters of Mercy, certainly, as a big resource. However, I am not like the (2), who thinks they are going to be able to come back again. I don’t think so.

*Kaitlyn Greenidge is a contributing writer for Lenny Letter and the author of the novel* We Love You, Charlie Freeman.