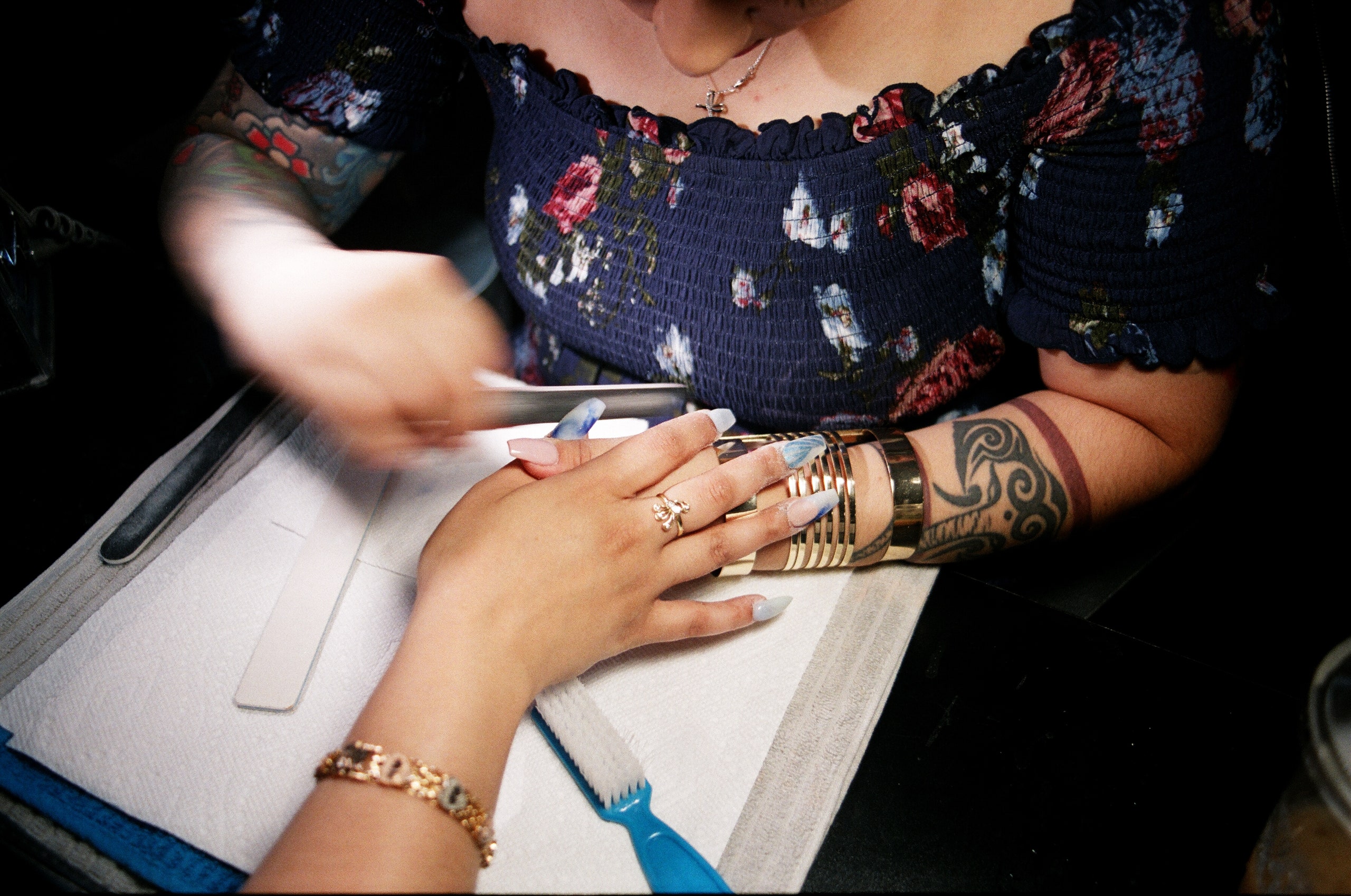 It was a ritual.

Every weekend, growing up in Detroit, my mom or one of my play aunties would take my friends and me to Northland Skating Rink, and what I remembered most wasn’t mastering the art of backward skating or what boy I ended up locking hands with when a slow jam came on, but the nails of the women who worked behind the ticket counter. Ostentatiously long, square and slightly curved, brightly colored, airbrushed and embellished. Their hands were always the center of attention, making transactions less mundane: meditatively tapping the table, typing digits into the registers and meticulously handling cash, and picking up coins as if their acrylic nails were an innate extension. For eight-year-old me, these nails were the epitome of cool.

My grandma Lorraine would get her nails done every two weeks. For more than twenty years, she worked the assembly line building car parts for General Motors, and she did it with her long, luxurious acrylic nails, sometimes a vibrant red and other times a pink-and-white set; she saved airbrushing and rhinestones for special occasions. On Saturdays, I would tag along with her to the nail salon where I got my first manicure and pedicure (baby pink) and I learned about the intimate relationships that women build with their nail technicians (it takes at least two hours to finish the process). “Once I found the right person, I was with them for a long time,” my grandma told me.

For the black women I was surrounded by growing up — including ones on television like Flo-Jo, Missy Elliott, Coco from SWV, and Lil’ Kim — getting your nails done (and in many cases what hairstyle you wore) was more than just routine pampering. It was a means of self-expression — especially for women who were employed by a place that required toning down your style or wearing a uniform. Yet in the ’90s, outside of my world, the same women I idolized were deemed *ghetto*, *tacky*, and *unprofessional* — mainstream society ignored the intricate artistry, perplexed by the women’s ability to function with *those* nails.

Today, these perceptions have changed: a bubble burst around 2012, when over-the-top nails became a mainstream trend, attributed to both social media and appropriation from women of a different class and skin color. Popular nail shapes have changed, too. Nail techs have abandoned the thicker, square acrylics for sleeker styles like stiletto (a long, pointed shape) and coffin (a tapered shape with a flat top). Nail designs are more innovative, doing away with stencil airbrushing and small rhinestones and swapping in huge crystals (think Cardi B), colored acrylics, chrome, and holographics.

But through all these changes, one thing has remained the same: the intimacy between the client and stylist. Oftentimes, when we talk about self-care that involves other people doing the care, it’s referred to as a solely one-sided act. We overlook the routine of give-and-take, creative collaboration, and trust. I visited three nail salons to explore those relationships, the routine of keeping your nails up, and what makes the process so meditative on both sides of the table.

“People are like, ‘How do you type with your nails?’ And I’m like, ‘What do mean?’” Jennifer Inoa tells me. “I’m like, ‘What does having long nails have to do with preventing me from doing things?’ I mop the floor. I clean my house. I move furniture. Once you get them done and you get used to them, you can’t function without them. You feel naked.”

Inoa has been getting her nails done since she was a fifteen-year-old living in the Dominican Republic, and now, for the past two years, she’s been a regular, twice-a-month client of Robin Lyn’s solo studio in the Bronx. Lyn believes that the relationship you build with clients — with each appointment taking a minimum of three hours — is what keeps them coming back.

“My clientele is perfect for me. *Why?* They crazy. They love me. They all have fun. I feel comfortable with my clients, and they feel comfortable with me,” says Lyn, who’s been doing nails for six years. “I always say, you can be the best nail technician in the world. But if you don’t have that bond with your client, you’re gonna eventually lose her. It’s not like I’m just doing their nails. I’m learning them. I’m their psychiatrist. I’m everything. And they are the same with me.”

Today is special for Inoa: It’s her first appointment in two months after breaking her leg in a freak accident (“Every time Robin would post a photo of nails on Instagram, I would be crying, like, *Oh my God!*”). She tells me she likes her nails to be long, fancy, and attention-grabbing (“I feel confident. I feel like I can take over the world”). And for the occasion, Lyn is going all out with a set of encapsulated acrylic nails in hues of blue, with a different design on each nail — a marble one, one with sparkles, one with holographic cut-outs, a bejeweled one. It’s a guaranteed ticket to have all eyes on her nails.

Though attention to her nails isn’t always what Inoa wants — she recalls a time one of her nails broke immediately after receiving a compliment. Both Inoa and Lyn bring up the Spanish saying *mal de ojo*, which is bad luck caused by another person looking at you with envy.

Lyn mentions that this is something that most of her clients believe in. “She wouldn’t show her nails off for a little — well, she stopped showing her nails off to certain people.”

HAshly Louis wants her nails to reflect an upcoming trip: New Orleans for Essence Festival. It’s the first time she’s come up with her own nail design since she started going to Tiana Hardy’s Tiny Luxury in Brooklyn six months ago. Hardy gives clients two options: Bring an idea or a photo of what you want for your nails, and she’ll sketch out a concept. Or, for indecisive clients like Louis, give her full control: Hardy picks the color and the design, and you can’t change anything. Today, Louis wanted to capture the colorful, crazy atmosphere of Louisiana with bright-orange nails, holograms, a zebra pattern, and gold and silver embellishments that could have easily been on a Mardi Gras costume.

Today, Louis is wearing coffin-shaped nails, narrow and square at the tip. But the length and shape of her nails depend on her work. If she wants extremely long nails, she’ll make sure all of her household chores are finished. She’s tried stiletto but wasn’t a fan because they ripped holes in her clothes. When she was working as a store manager and lifting boxes, she wore coffin. And now, with her computer-based job, she prefers almond-shaped nails.

For Louis, getting her nails done is the only beauty luxury that matters. She just started going on a consistent basis about a year ago, previously saving the ritual for special occasions and birthdays. “I’m a tomboy, so, honestly, I don’t really like doing my hair. I can walk outside with a pair of shorts and a shirt and I don’t care. But my nails have to be done,” she says. So it’s a relief to have finally found someone she can trust (she tells me a horror story about a nail technician who couldn’t do the design she requested and ended up ruining her nails on her birthday).

“When you go to the regular nail salons, it’s always, ‘Pay now.’ And they rush you through it. doesn’t rush, she’s not like, ‘Well, my next client is here, I can’t do this.’ I like that she takes her time, she doesn’t rush, and I just vibe with her,” Louis says.

Creating and collaborating with clients is Hardy’s favorite part of doing nails, which she taught herself how to do in college before going to cosmetology school. Now, she’s been working professionally for three years. “I don’t like feeling like this is robotic, like you’re coming here and I’m just doing your nails, painting, and throwing something on it. I like the thought process behind it,” says Hardy. She prefers doing longer nails because of the larger space she has for designs.

Hardy shares her studio with a hair salon, but being the only nail artist in the shop, she called her space Tiny Luxury, a play on her nickname (Tiny) and the way she feels about nails.

“There are different luxuries in life, but I definitely consider this a tiny luxury compared to the luxury of going on a vacation, buying an expensive bag, or spending $1,000 on hair. It’s very much a luxury you can afford for yourself, and when you’re done, you leave feeling like a million bucks.”

Sime Phillips moved to New York from Philly with her wife three years ago. For two years she’s been a faithful client of Dany Fink, whom she found on Instagram; Fink is one of four nail artists at the Nail Bar in the Bronx. They clicked instantly: laughing, joking, trash talking and “comparing shade.” Plus, Fink always looks out for Phillips, when it comes to the length of her nails.

“I tend to like them a little longer than I should have them, because for me, the longer the nail, the more feminine and pretty. He keeps me in line when I go too far, so I don’t get in trouble,” Phillips tells me.

Phillips started getting her nails done when she was twelve with the money she got from her first summer job. Now working as a nurse, she has to contend with her job’s nail length restriction, which is a quarter of an inch above the meat of your finger (“That’s not happening,” she tells me). Phillips had to prove to her boss that her nails — which today are a pink-and-orange ombré with jewel tones, gold adornment, and glow-in-the-dark acrylic powder — wouldn’t stretch, stress, or break the latex gloves. She just wears a larger size: problem solved.

“If I’m going to wear scrubs or have to deal with bodily fluids all day, at least when I clean my hands and look down for two seconds before I put my gloves back on, I feel like myself,” Phillips says. With her line of work, Phillips is also constantly sanitizing her nails. So she and Fink came up with a technique, what he calls semi-proofing, to help her nails last: he uses Aora Titanium top coat, applying a little bit more over the nails and gems than he usually would.

Fink’s own nails, which he does himself, are cause for conversation, too. Today, he’s wearing curved stiletto nails with gold lacquer and clustered crystals (“Everybody calls them Cardi B nails”) that he designed for Pride week. He started doing other people’s nails (working out of his home for three years before moving to the Nail Bar) because he loved getting his own done — a ritual he started eight years ago, eventually learning to do manicures himself.

Though he has a large following of people who love the nails he does, he tells me that he gets mixed reactions about his own.

“You think he has a wife?” says Phillips, laughing.

“I was just like, ‘She loves them,’” says Fink, laughing.

And from there, it’s back to their regularly scheduled nail talk.

*Tahirah Hairston is an associate editor at Lenny who was so inspired by these intimate stories that she has now become a “nail person.” Right now, she has baby-pink coffin-style nails.*