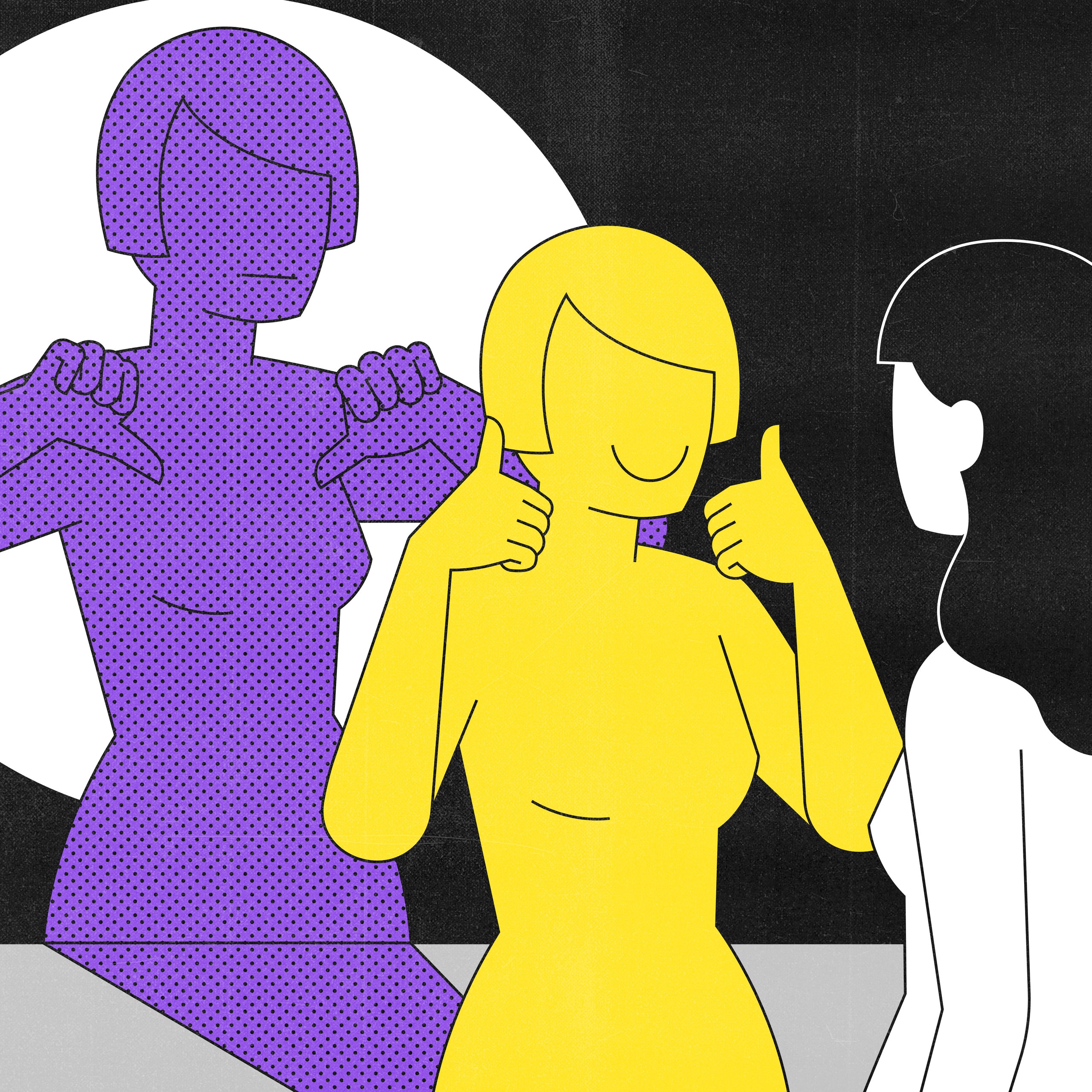 I thought that friends were supposed to be open and honest with each other, but many years ago I learned that that credo is not *quite* true. Louisa and I were part of a small group of friends who became close in college. As we found jobs and relationships after graduation, we had less time to socialize, and when we did, that time was more precious. But Louisa started dating a guy who made these gatherings miserable.

A little older than us, with a good job and steady income, this boyfriend had more money than the rest of us (which wasn’t saying much, since we were recent college grads with entry-level jobs). He made it clear that he felt superior, and that when he spoke, which was frequently and for extended periods of time, we were supposed to listen without interrupting. He wasn’t interested in anything we had to say.

No surprise, we began to dread the idea of hanging out with Louisa when he was around. When one of the other women in our group confided in me that she was avoiding getting together with us because of him, I took it upon myself to address the problem head-on. Louisa was a close friend. We were supposed to be honest with each other. I could just tell her that I didn’t like her boyfriend, right?

I was completely wrong. Whoever came up with the idea that we could — or should — be totally honest with our friends either never really had close friends or never had anything bad to say about any of them. Louisa was hurt and angry and stopped joining group activities. Someone asked her what was going on, and when she explained that I’d confronted her about her boyfriend, the group turned on me. How could I, a person who hoped to be a psychotherapist one day, have been so *unfeeling*, they wanted to know? (Never mind that every one of them had been complaining nonstop about how uncomfortable she was when Louisa’s boyfriend was around.)

So what’s the truth about honesty among friends?

Let’s start with why it’s important to be honest. Author (2) tells us that honesty is crucial to trust, and that without trust relationships cannot flourish. This maxim is certainly true in friendship. For instance, we need to know that our closest friend will tell us honestly if a dress is too tight or too short, if we have a piece of spinach stuck in our teeth, or if we have stepped over the line at work. And we have to know that she’ll help us figure out how to fix our mistake. But do we want that friend to tell us when we’ve gained a few too many pounds, or when she doesn’t like our boyfriend? Often, the answer is, truthfully, no.

Bryant also tells us that “being dishonest takes a toll on your self esteem and self worth.” Since lying goes against many moral codes, we will ultimately feel ashamed and unworthy when we are dishonest. Being truthful can affect our physical health, as well. For instance, in (3) conducted by Anita E. Kelly, a psychology professor at the University of Notre Dame, a group of adults who spent five weeks saying only what they truly meant reported significantly fewer health problems in the last week of the study than did those in a control group who did not receive that instruction. (The time lag was apparently due to the fact that it takes time to learn not to tell lies.)

We know there are a lot of reasons to be honest. But what do we do when telling the truth actually backfires, as it did for me? Don’t we all lie even just a little — maybe especially — to a close friend, often to protect her feelings, as when we tell her that we can’t tell she’s gained any weight, or that her baby is the cutest thing we’ve ever seen? Is that morally wrong?

Psychologist Dan Ariely, who wrote a (4), says that many of us choose tact over truth when talking to friends, acquaintances, and even colleagues. He explains that it’s an inescapable aspect of the human condition. We are relational animals, which means that our connections to others are crucial to our emotional and physical well-being. As author (5), “Honesty without compassion is cruelty.” And Robert S. Feldman, in his book *The Liar in Your Life: The Way to Truthful Relationships*, writes that most people lie several times a day — even those who say that they never do — often either to build themselves up or to protect someone else’s self-esteem.

Much of the time, honesty is important to keep these connections going, but some truths can be more destructive than helpful. How can you decide when it’s best to fudge the truth with a friend, and when it’s best to be painfully honest?

One of the ways to decide whether to do so is to be honest with yourself: ask yourself what your motives are. For instance, according to (6), “honesty is often a veiled form of self-indulgence.” What does that mean? Sometimes, Turndorf tells us, honesty is a way of letting off steam, expressing anger, and even being purposefully cruel.

It’s not always easy to figure these things out. But with Louisa, for instance, if I had asked myself that question, I probably would have answered that I wanted to tell her because I wasn’t comfortable around her boyfriend. So I would have been taking care of my own needs, not hers.

When similar situations have arisen since then, I’ve found other ways to deal with my dislike of a friend’s partner or spouse. For instance, I try to find times to get together with my friend alone, instead of with her significant other. And when I simply can’t avoid social situations with the other person, I suck it up and behave myself for the sake of our friendship.

Based on his research, Ariely concludes that most of us find a middle ground about this question. In general, he says, we stick to our moral convictions and don’t cheat or lie nearly as much as we actually could. But when we do lie in an effort to protect another person, it’s often because we’re choosing one moral conviction (the belief that we shouldn’t intentionally hurt another person) over another (the belief that it’s better to tell the truth than to lie).

On the other hand, sometimes the better choice is to tell the truth, even when we know it’s going to make someone angry with us. After genuine soul-searching, if you are willing to risk your friendship because what you have to say is important to the health, safety, or well-being of your friend, Kavanaugh says, then you might want to go ahead and be honest with her. Sometimes even that decision is complicated. For instance, when a friend is in an abusive relationship, pointing it out to her could shame her and end with her pulling away from you. Staying close, reminding her that you care for her and that you are available to help her find professional assistance when she’s ready, may be far more painful than telling her the truth about her relationship. But it might be more helpful.

Being honest can sometimes end a friendship. That’s what happened to Louisa and me. Gradually, everyone in our group went in different directions, and little by little, we lost touch with one another. I’m not sure that telling Louisa that I didn’t like her boyfriend caused the group to dissolve, but it certainly moved things along.

Despite all this, honesty can be the true test of a friendship. Telling a friend something that will improve her health or her life can deepen a bond. The lesson that I learned from my relationship with Louisa is that you have to be clear that you are really saying it for the other person. You also have to make sure that you say what you have to say with tact and empathy, and at a time when she is open to hearing it. Telling a friend who struggles with her weight and body image that she needs to go on a diet, for example, is neither tactful nor kind. Letting her know that you love her is far more valuable — and might lead her to ask for your help when she is ready.

But sometimes telling the truth directly, without any cushioning at all, is the best thing you can do. For instance, a woman in her seventies told me that she and another woman had been friends for more than fifty years. “She could be difficult,” the woman told me, “but she was a wonderful friend. She was the one who held my hand through an awful, illegal abortion in my teens. We cheered for each other and leaned on each other throughout the ups and downs of our lives.” But now her friend was creating problems among their group. “She’s gotten more difficult, kind of crotchety and obnoxious, and doesn’t listen to anyone else when they talk. And our other friends wanted me to do something about it.” After spending a little extra time with her old friend, she realized that the other woman wasn’t ignoring the others. She was going deaf.

“I told her to stop being so vain and to go get a hearing aid,” the woman said. “I said that if she didn’t, people were going to stop hanging out with her because she was getting so hard to be around.” The other woman stormed off and didn’t talk to her friend for about a week. And then she appeared at her friend’s door. “Do you notice anything different about me?” she asked. Nothing stood out. “I have a hearing aid,” she said with a huge smile.

Honesty, it turns out, is both crucial to our self-esteem and to our relationships — and yet far more complex than we generally realize. A friendship without honesty cannot last, since trust is one of the most important ingredients in any relationship. Yet trust also means knowing that your friend will not intentionally hurt you. And there, perhaps, is the key. If we are careful when we express our truths, if our *genuine* intention is to offer a friend a loving hand, and if we freely encourage her to express a truth that is different from ours, then, even when what we say hurts, it hopefully will not destroy a friendship.