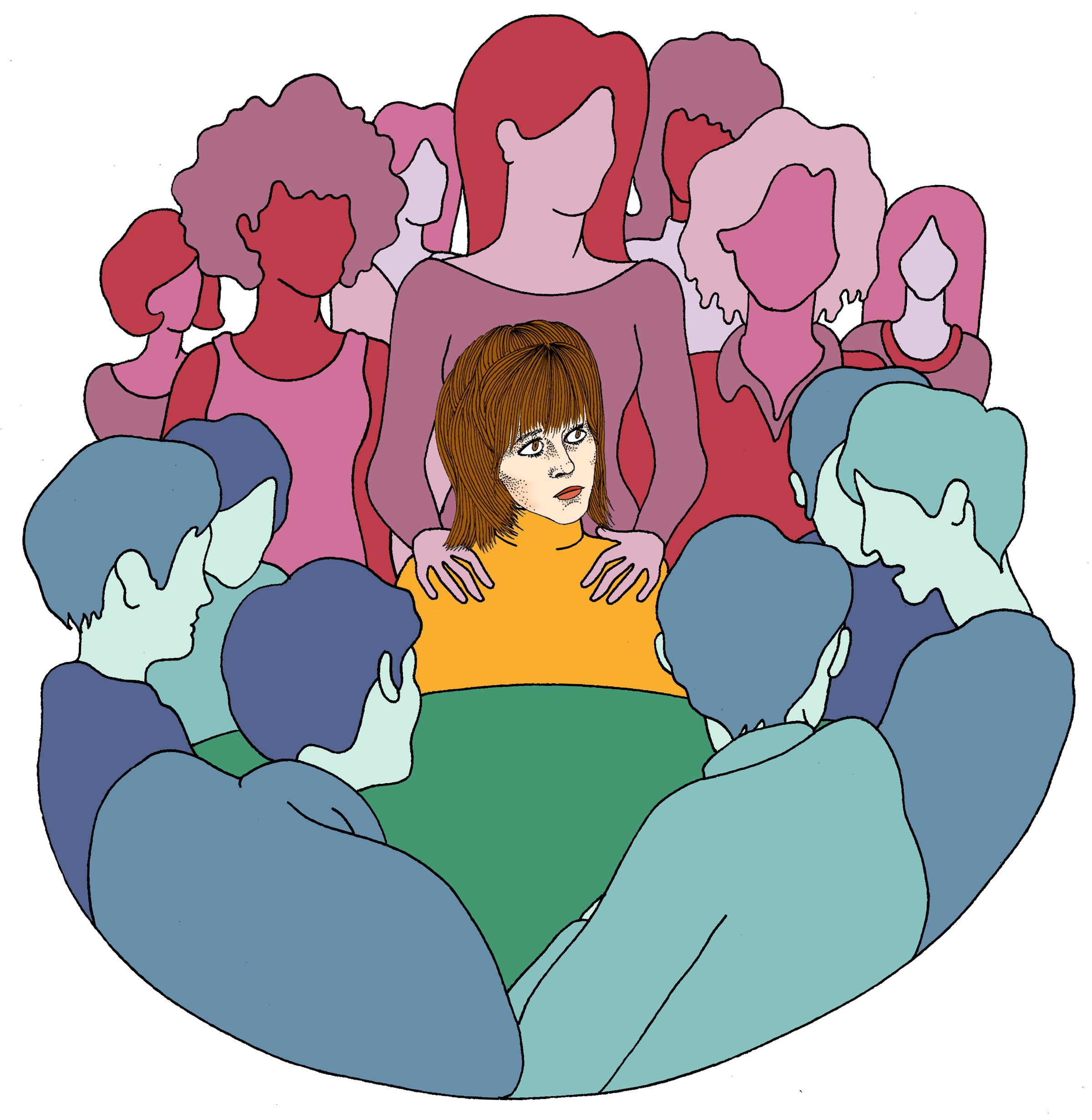 ​Lena asked me to write about my journey to feminism. Lena asks, I do. So here it is.

For starters, I was slow getting here.

In 1970, when I was 33, I learned that 5,000 women in New York City were demonstrating for legalized abortion. I wrote in my journal:

“Don’t understand the Women’s Liberation Movement. There are more important things to have a movement for, it seems to me. To focus on women’s issues is diversionary when so much wrong is being done in the world. Each woman should take it upon herself to be liberated and show a man what that means.”

Yeah, sure. I’m glad I kept that journal as a reminder of how far I’ve come. I had been married and living in France for eight years and had just come home to become an anti-war activist. It was a very different country from the America I’d left, so I decided to spend two months, that spring of 1970, driving cross-country to New York, where I was to start filming *Klute*. I needed to get to know the USA again.

Two weeks into my trip, Nixon invaded Cambodia; four students were killed at Kent State, two at Jackson State; 35,000 National Guard troops were called out in 16 states; a third of the nation’s colleges closed down; and before I arrived in New York, I’d been arrested five times for distributing copies of the Uniform Code of Military Justice outside military bases.

Yet what I remember most vividly was none of that. It was a woman I met. Terry was her name. She ran a G.I. coffeehouse in Killeen, Texas, near Fort Hood. These coffeehouses — springing up outside major military bases around the country — were meeting places for active-duty soldiers who were questioning the war. I had just become involved as a civilian supporter of the G.I. Movement and was spending as much time at as many such coffeehouses as I could.

The moment I was in Terry’s presence, I *felt* something shift. Not something I had been missing or was looking for, because I hadn’t known it existed. But I felt different in her presence. I watched the way she dealt with the soldiers. She didn’t judge the young men who were on their way to Vietnam. She knew most of them were from working-class or poor, rural, and inner-city environments with few alternatives or fancy lawyers to get them deferments. I watched as she engaged them in what I now call “heartful” listening — listening not just with her ears, but with her heart.

It wasn’t until much later, when I read Carol Gilligan’s *In a Different Voice*, that I discovered the early 1970s were when new feminist psychologists were bringing empathic, relational listening — the opposite of the Freudian approach — into their therapeutic professions, with revolutionary results. It turned out that heartful listening can initiate a healing process for people who’ve been violated physically or psychically. I doubt that Terry knew this. I think she was simply modeling in her everyday life the sort of democratic society she was fighting for, where everyone deserved respect and compassion. She manifested this with the soldiers and with me.

Terry seemed to see *me*. Not the “movie star” me, but a whole me that I myself didn’t even know yet. I don’t think I’d ever felt *seen* before. She was interested in why I had become an activist and how I had gotten involved in the movement.

> I don’t think I’d ever felt seen before.

While we planned an upcoming rally, she asked my opinion and included me in all decisions. This was new for me. When the male staffers printed flyers for the rally without consulting the women, Terry called them on it. It was my first time experiencing what I later realized was feminist leadership and sisterhood, and it was powerful, palpable.

One night, Terry brought a feminist to the coffeehouse to speak to soldiers about the women’s movement. At first I was shocked. *Why was it important to talk to soldiers about the women’s movement?* I remember the talk well. The woman said that if there were true equality between women and men, it would be good for both sexes: men wouldn’t feel that they alone have to carry the burden placed on them by the system. “It’s not a matter of women taking a piece of your pie,” she said to the rapt men sitting on the floor of the packed room. “It’s about us sharing the pie and making it bigger. It’s a win-win. Boys, men, women, girls, the Earth, everything.” Her talk helped me understand that for feminists, a *belief system* is the enemy, not men. “Patriarchy” is what she called it. Up until then, I assumed being a feminist meant being angry with men.

I began to identify myself publicly as a feminist, although it would be many more years before I would be brave enough to look within myself and locate the multiple ways in which I had internalized sexism and the profound damage that it had done to me. As the Indian sage Kristnamurti said, “You think you are thinking your thoughts, you are not; you are thinking the culture’s thoughts.”

The culture that incubated in me since childhood insists that to be loved, a female has to be perfect: thin, pretty, having good hair, being nice rather than honest, ready to sacrifice, never smarter than a man, never angry. This didn’t matter so much when I was a strong, feisty tomboy during childhood. But when I hit adolescence and the specter of womanhood loomed, all that mattered was how I looked and fit in. My father would send my stepmother to tell me to lose weight and wear longer skirts. One of my stepmothers told me all the ways I’d have to change physically if I wanted a boyfriend. Meanwhile, I sort of … hollowed out. Almost everything interesting about me scooped itself out and took up residence alongside the empty, disembodied me.

> Almost everything interesting about me scooped itself out and took up residence alongside the empty, disembodied me.

It’s hard to be embodied if you hate your body. Like three of my father’s five wives, I developed an eating disorder (probably to fill the emptiness), and given that it was, at least partially, an inauthentic me that I presented to the world, I instinctively chose men who would never notice because of their own addictions and “issues.” Ah, but they were interesting, charismatic, alpha men, and they validated me.

And, of course, I continued to try to be perfect on whatever level the man I was with wanted, willing to forgo emotional intimacy and betray my own body and soul if honestly speaking with my true voice might mean losing him. (Trust me, my Oscars should be for my *private* life.)

It wasn’t even that I depended on any of them financially, as many women do who turn themselves into pretzels for their men. I always supported myself. (1) has been raised in this newsletter, I want to admit that back then my self-esteem was so low I assumed I was paid less than the men and that I didn’t *deserve* more.)

What the public saw was something else. They saw a feminist. And I was one, in that I supported women candidates, brought gender issues into my movie roles, produced women-centered films, and made exercise videos to help women get strong physically. But my feminism was theoretical, in my head, not my blood and bones.

For me to really confront sexism would have required doing something about my relationships with men, and I couldn’t. That was too scary. It would have been like stepping off a cliff without knowing if there was a trampoline below.

When I turned 60 and entered my third and final act, I decided that, no matter how scary it was, I needed to heal the wounds patriarchy had dealt me. I didn’t want to come to the end of my life without doing all I could to become a whole, full-voiced woman.

> I didn’t want to come to the end of my life without doing all I could to become a whole, full-voiced woman.

I worry that the word *patriarchy* makes people’s eyes glaze over with the assumption that it means “Men are bad, and we need to change to a matriarchy.” Of course, given all the ways we’re now learning women differ from men, a brief dose of matriarchy might not be the worst thing: a course correction to restore some balance. My third husband, Ted Turner, is fond of saying, “Men, we’ve had our chance and botched it. It’s time to turn it over to women.” (On some level, he really means it. Then again, he never liked me to talk too much.)

But this is not about replacing one “-archy” with another, it’s about transforming social and cultural norms and institutions so that power, violence, and greed are not the primary operating principles. It’s not about moving from patriarchy to matriarchy, but from patriarchy to democracy. *Feminism means real democracy.* There’s no road map to get there. It hasn’t happened yet. Women and men of conscience have never had a chance thus far to make our revolution.

The journey is both external and internal, political and personal. For me, the personal meant becoming a single woman, no longer silencing my voice, slowly becoming the subject of my own life. My friendships with women grew deeper and more fulfilling. I read books I’d read before, by Carol Gilligan, Gloria Steinem, Robin Morgan, Gerda Lerner, bell hooks, and Jean Baker Miller, among others, but I understood them in a new way. In the process, I discovered that what I’d thought were just my issues were, in fact, shared by other women.

I was not alone. The personal became political, and I became an embodied feminist. I had gone from believing that women’s issues were a distraction, mere ancillary problems to be addressed after everything else had been taken care of, to the realization that women are the issue, the *core* issue. We will fail to solve any problem — poverty, peace, sustainable development, environment, health — unless we look at it through a gender lens and make sure the solution will be good for women.

It took me 30 years to get it, but it’s OK to be a late bloomer as long as you don’t miss the flower show.

*Jane Fonda is an actor, activist, and writer.*

1) (Since the issue of (https://lennyletter.com/work/a147/jennifer-lawrence-why-do-i-make-less-than-my-male-costars/)