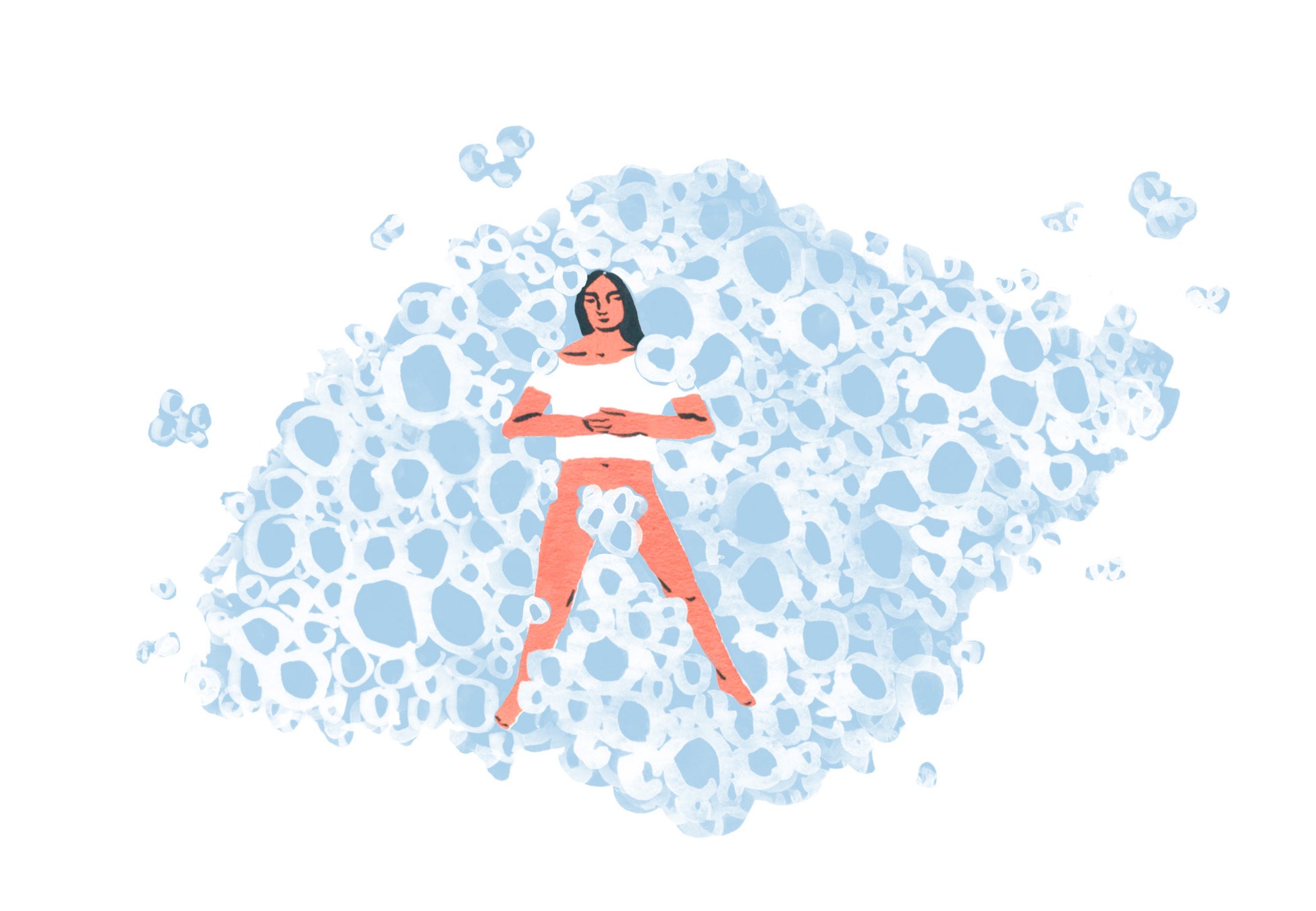 I love bathing. I love soaps, bathtubs, bubbles, clean washcloths, good sharp razors for leg and armpit shaving, and other things like breezes through the bathroom window while the bath is going on. I’m interested in weird old-fashioned stories about people who only bathed once a solstice or something like that, and I’m thrilled by how gross everyone’s bloomers in *Sense and Sensibility* probably were. (Very, very gummed up; a complicated mystery to their wearers.) My mother always says that it’s rude to give people soap as presents, because you’re insinuating that the person has a noticeable hygiene issue. I think she’s wrong about this one, because I love having lots of different soaps, and I love putting them in my linen closet to make the towels smell like soap, and I love myself for these preferences.

I’ve always been afraid that someone will tell someone else that I have a bad smell. This stems from overhearing those high school boys who want both to have sex with a vagina but also to disparage one. I remember a dumb asshole talking about how he finally “ate Ashley out, because it just needed to happen, so I just fuckin’ held my nose and went for it, and then I put in a whole pack of Trident,” as if he were a young hero whose dear grandmother had dropped her diamond ring in a toilet full of shit, and he had bravely bobbed for it and retrieved it, face first. It makes sense that even though I’d never been afraid or ashamed of my vagina, when I heard vaginas spoken about this way — I was 17 — I got scared that maybe my vagina was against me, that it had a mind of its own and a bad attitude.

This is what I was thinking as I drove myself to get my very first-ever, and probably only-ever “Vajacial.” The Vajacial is billed as a facial, but for your pussy. I wasn’t sure how major it was going to be. I enjoy getting my face cleaned, and I like the idea of deep, weird dirts getting taken out of my face skin so that I can have a clean face to show everyone. But my vagina is, well, not a face. I don’t prefer to show it to everyone, and I do enjoy bathing it without any help.

The fact that The Vajacial exists seems to insist that we need it. And although nobody can intimidate me about my vagina anymore like that 17-year-old boy did in the ’90s, I started to feel intimidated by the creeping unknown of: “What if there is something off about me and my body and I don’t know about it? And my happiness is about to be ruined?”

I had to say to myself, “You are a cheerful volunteer today. You are not just a hungover lady who is driving to a fancier neighborhood to get her pussy cleaned. Don’t do that to yourself.” I calmed myself down by focusing on how nice it is to have open windows in the car. It took me a while to find parking; my anxiety spiked. I worried about a sudden attack of crotch B.O., which I don’t think is a part of my life, but an ex-boyfriend of mine suffered horribly from it, and it was shocking, like having a growling pet that lives in your house without permission.

I had chosen overalls for my outfit, and my hair was cut into what I think is a lovely, curly globe. I have made an emphasis recently to dress in a way that makes me feel privately pretty. Perhaps The Vajacial would make me feel very privately pretty. *Maybe I should have worn a dress?* I thought, but then decided that I was right to wear overalls: hiking your dress up to have someone else clean your vagina seems like something a hemophiliac princess would do (in some moment of last-ditch vagina care, done to her by a cousin who is her lady in waiting, all in an effort to prep her royal vag before she is married to her much older brother or something). Whereas taking off your overalls for a vagina experiment seems much more like a thing that a chill candlemaker, a smart sheep farmer with good names for the sheep, or a modern witch would do.

> Taking off your overalls for a vagina experiment seems much more like a thing that a chill candlemaker, a smart sheep farmer with good names for the sheep, or a modern witch would do.

“Hi! I’m here for a … I’m Jenny. Hi” was about what happened between me and the receptionist. She was very smiley, looked in her computer, saw what I was there for, and said, “It’s a great treatment. You’re really going to love it.” I said, “Thanks,” in a weak way, because I could tell that nobody cared about anything that was going on. There were lots of gilded mirrors and patterns of fleurs-de-lis. Jessica, a tall woman with long blue hair, showed me into a small room. One wall was painted lavender; the other, closest to the table I was to lie on, was covered in a fuzzy silver wallpaper that I wanted to touch but did not.

I shyly explained to her that I had volunteered to get “The Vajacial” and asked her some questions about it that I thought I should ask. “Why do people do this?” Answer: to get rid of ingrowns; to decrease pigmentation; to make themselves feel good; out of curiosity. “Will this hurt?” Answer: ha ha. No, but if you need tweezing, I will do some tweezing. “Is stuff going to go inside of my vagina?” Answer: no. (And then a little laugh, which I appreciated.) Before leaving the room, she instructed me to undress from the waist down, just like a bikini wax. I removed my overalls and underwear and again thought, *This is for sure better than just pulling my dress up.* *That’s obscene. This is direct.* Also, once I was alone, I touched the fuzzy silver wallpaper. My newest secret.

Jessica came back in, and we proceeded with The Vajacial. First, she powdered me like a baby, which made me want to leave. Then she applied a cleanser. She wore gloves and really kept away from any vagina parts of my vagina. The whole thing was only “frontal.” What a gross sentence! Next came an exfoliant peel that was supposed to soften the skin on the bikini line and help with any bumps. Then she toned my bikini line. I chatted with her throughout this first part, which took maybe a total of seven minutes.

Then she pulled out the tweezers and tweezed two ingrown hairs on my bikini line. I was deadly silent except for a lot of deep breaths, tiny little poodle yelps, and, after a minute, a truly anxious and dumb statement of “I’m really quiet right now.”

“Yeah,” she agreed. “This is the part when people usually stop talking.” “Oh, really?” I stress-whispered, as she finally took the tweezers away. Tweezers even near my vagina is a really big “No, thank you” for me, but I volunteered for this, and I was going to do it completely. After the silent tweezing, she toned again. Then she gave my vagina a “modeling mask.” It was a white, clay-like mask; she put it on and then said, “Just lie here and relax. I’ll be back in 5 minutes.”

It started to harden and looked like a tiny diaper. I never got a real idea of what this mask did, but I enjoyed texting and emailing at least six different people to say, “I’m lying in a lavender-colored room with a mask on my vagina. Not a masquerade mask.” Jessica came back in and said, “This is the fun part,” and she was right. I guess if there was a “fun” part of what was swiftly becoming a bland experience, this was it: even though I couldn’t tell if the mask had done anything, I truly enjoyed that it had become a solid, that Jessica peeled it off the way that you peel dried glue from your palms after an afternoon of gluing macaroni to paper plates, that it didn’t hurt in the least, and that, most important, she liked doing it so much. I felt happy for Jessica and her satisfaction level.

Jessica told me that the final step would be a lightening cream. I told her that I didn’t want to lighten my skin, and I was wary of this, but she said it was just to even out the pigment, so I let her go ahead and put it on. She did. Then she took it off, and, with no ceremony at all, The Vajacial was complete. Jessica left the room, and I looked down at my vagina. It looked the same as before, and there was some random powder on my thighs.

> The Vajacial was complete. Jessica left the room, and I looked down at my vagina. It looked the same as before, and there was some random powder on my thighs.

When I volunteered to do this, I imagined writing a piece that was bouncing with crazy, or maybe inane-sounding, facts. I can’t really offer that right now? I do think that this treatment would be helpful if you have frequent and bothersome ingrown hairs. I do. And Jessica was very kind and is a good esthetician. Maybe this would be exciting if you’ve, I don’t know, never let someone else see your vagina? I guess I was generally excited to show my vagina to a new, nice, nonpredatory person, so there’s that. It’s A-OK to try new things for your body and to be curious about the world of grooming, but would I suggest a $70 “facial” for your vagina? No. Do you know why? It’s more trouble than it’s worth. I could have done all of that stuff to myself.

What isn’t great about this treatment is the potential for useless questions and self-doubt to pop up in your sweet, smart head. Why start up an internal, anxiety-based conversation that doesn’t serve you, one that was maybe started by an ignorant male teen who has not been taught how to be in a world with women? That ignorant person does not belong in your head, in the present. The Vajacial is harmless compared to the tons of bullshit that is peddled around by people looking to make money off the fact that we live in a society that tells us that we, in our natural form, are not enough, that our form is not naturally easy to understand or connect to. I don’t recommend the Vajacial because I simply don’t think we need to spend our time in that marketplace.

Listen, I often walk around feeling that I’m an impostor adult. I make a ton of mistakes, and if my feelings were a person, that person would have messy hair like a bird’s nest (there might even be birds in there), skinned knees, and crumbs in her pockets, but also vibrant powers. I have a lot to work on. I know I must try to learn more about how to serve myself and to lessen the amount of self-abuse. But I understand with pride that I like the personal and daily ceremony of bathing my body, and I love my vagina just as it is. This is what I thought of as I sped away from the fancy neighborhood, with my window open, back to my little house where my clean towels were waiting for me, smelling like the soaps that my mother thinks are very rude gifts.

*Jenny Slate is an actress, a comedian, a New York Times–best-selling children’s author, and a human woman.*