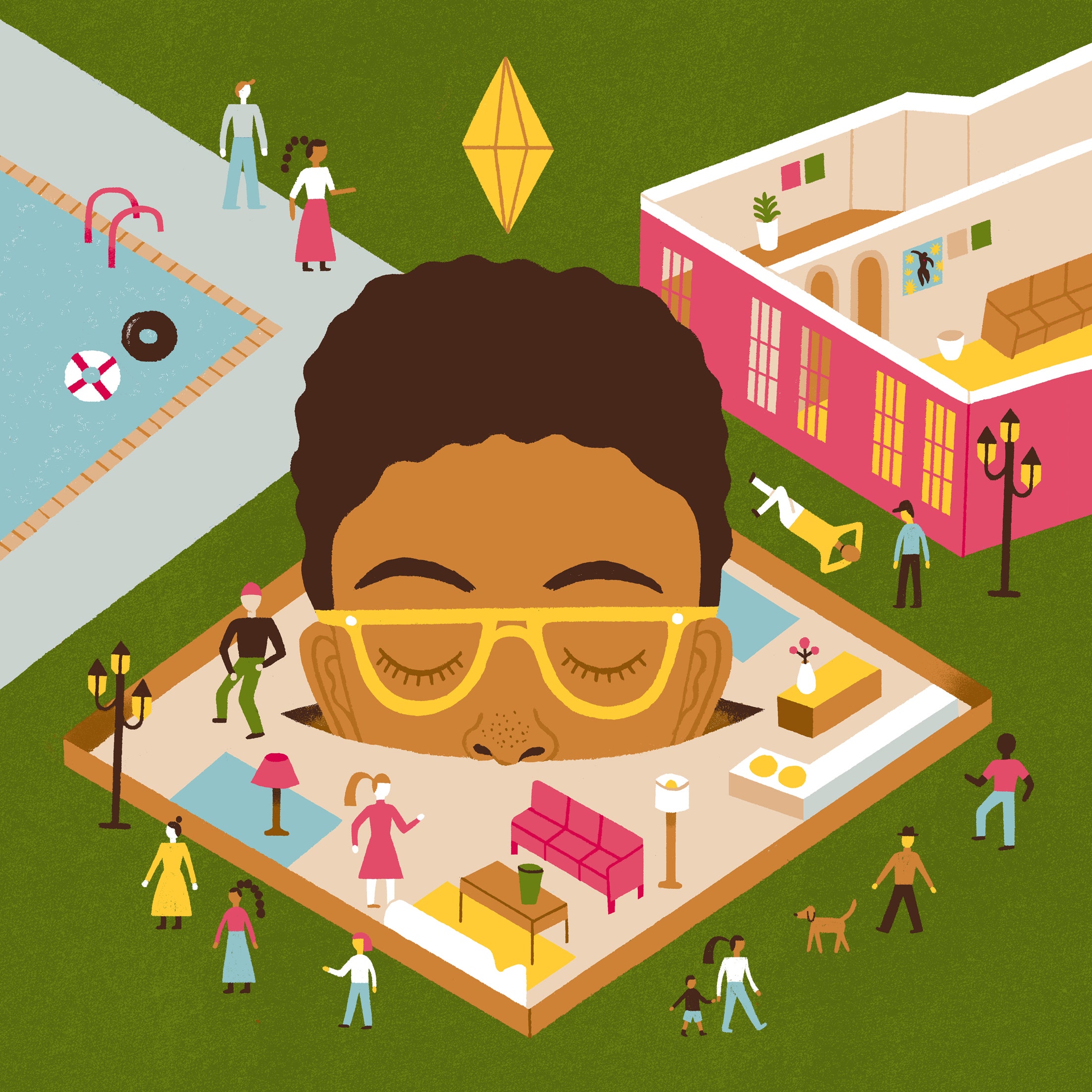 In 2008, right before my senior year of high school, my parents informed my sister and me that we would be moving in a month. Earlier that year, my father had lost his small plastics plant to the automotive crisis. I was old enough to know that moving under our circumstances was embarrassing and that it wasn’t going to be the last shameful thing that the recession brought our way. I watched as relics of my childhood flew into Dumpsters or were sold off. By August our home was empty and we were driving away.

At my new high school, I ate lunch alone; I spoke to no one; I sat in the most inconspicuous seats during class; I made no friends. The only friend from home who made the time to visit me was my on-again, off-again boyfriend, DeAngilo. DeAngilo and I shared a group of friends, enjoyed the same type of humor, and both harbored a deep love for video games. He didn’t like the Sims, though. He said it wasn’t a real video game, and only losers with no friends played it. But I loved it, and, needing something to do with myself, I downloaded it at my new home. As the opening screen loaded, a wave of comfort overtook me. I pressed start.

> As the opening screen loaded, a wave of comfort overtook me. I pressed start.

Creation was my favorite part of playing the Sims. I was meticulous, taking hours to create my characters. I tweaked their appearance, dressing them in the whimsical yet sexy outfits I saw on *Girlfriends* and *Sex and the City*. I built them lofty homes and formulated their personalities so they were just right. Sims exist on a spectrum between placid obedience and something near autonomy, and, I always made my Sims defiant, like me. Comforted by their creation, I knew that even if my future seemed uncertain, my curation of their world was sound.

I intended this game to be a re-creation, a meditation of what I anticipated out of my nearing adulthood. I made DeAngilo’s Sim first: Evan, a tall, skinny chef in dark jeans and layered shirts; he wore a single metal spiked bracelet. I found cooking to be a profession far more suitable than DeAngilo’s real-life aspiration to become a horror-core rap artist.

A Sims version of myself was much more difficult. It had to represent the person I desired to be. Simone was a slender, messy-haired young adult whose only aspiration was to become a best-selling (or at least published) author — a dream we shared. Dressing Simone, I was reminded of my loneliness. What was it that DeAngilo had said? That only people with no friends played the Sims? I finished her up and watched as she and Evan danced around, smiling and hugging, excited to be alive.

> A Sims version of myself was much more difficult. It had to represent the person I desired to be.

I filled Simone and Evan’s house with beautiful things — walls lined with bookshelves, state-of-the-art kitchenware, fish tanks, bizarre oblong furniture — and deposited the couple in their new home. Simone nestled into a corner with a book while Evan put out a fire in the kitchen after an attempt at making a pot of mac ‘n’ cheese.

Evan’s kitchen fire was not an anomaly, even though I had created him as a chef. Sims are notoriously bad at cooking; they often burn even things like cereal or milk. Sometimes they accidentally light themselves on fire. As Evan patted down the flickering, pixelated flames, I realized it was late. After saving the game, I wandered back up the stairs of my new home to my new room and finally went to sleep.

I was deeply invested in Simone and Evan’s life — after all, it represented my ideal future. But it wasn’t any fun to play alone, so I introduced my younger sister, Felicia, to the game. She built her own home, just a few blocks away from Evan and Simone’s, and populated it with Marissa, DaNaisha, and Marie, a group designed to mirror herself and her two best friends. Felicia played with her Sims sporadically, just enough to keep them happy and alive. She had other interests, while my life orbited around the Sim world, the avatars falling in and out of visibility like a moon.

> I was deeply invested in Simone and Evan’s life — after all, it represented my ideal future.

The next time DeAngilo visited, I rushed him into the basement to show him Evan and Simone. He liked that his character was a chef, and he thought the spiked bracelet was a nice touch. I smiled like a proud parent as Simone hunched over her desk, furiously typing away at a computer while a knowledge gauge floated above her head, slowly filling to the brim, showing that she was learning.

Life in my Sim household was cheerful, while my real life continued to blur around me, a haze of lonely school days and a continuous stream of past-due bills piled onto the kitchen table. In Evan and Simone’s world, any expense could be paid for by typing in a quick cheat code. Your friends and your life and your house couldn’t just be taken from you. Evan and Simone’s world thrived in a way that mine could not. I needed it to survive.

When the game sent a notification that Simone wanted to throw a party for some of her Sim friends, I was confused. The idea of throwing a party, virtual or otherwise, doesn’t interest me. I was proud of my ability to create Sims that seemed to share my temperament, so her deviation stung a bit. Nevertheless, I allowed the party, curious as to what might happen.

> The idea of throwing a party, virtual or otherwise, doesn’t interest me.

The party was not very exciting. A dozen or so Sims milled around Simone and Evan’s home making small talk about sports and the weather, according to the illustrated speech bubbles above their heads. Halfway through I realized something was wrong. Simone had spent the last hour or so talking to a Sim named Marie — the Sim my sister had created as a version of herself. Marie and Simone spoke excitedly with each other, ignoring everyone at the party. After a while, hearts and roses danced in their speech bubbles while they giggled. They swatted at each other, flirtatiously.

I reminded myself that in the game, Simone and Marie were not sisters. But still, I grew feverish. I had designed Simone and Evan to get along, to love each other. I ended the party, but it was already too late: Evan had seen them stealing a kiss on the couch.

For the next few Sim days (hours or so in our time), I tried to salvage Simone and Evan’s relationship. I made Simone ignore calls from Marie; Evan tried to make extravagant meals for Simone, but he served her only burned food. I wanted Simone to proposition Evan with romantic activities like bubble baths and promises of Woo-Hoo, the Sims version of sex, but she was stubborn and bored. Evan was heartbroken. Their relationship was failing, and to me this meant that DeAngilo and I could fail too. I decided to act as any Creator might: with terrifying omnipotence.

The decision to kill Marie and her roommates was easy. I had killed Sims before out of sheer boredom or annoyance in various ways such as casually deleting ladders from a pool so the Sim, unable to climb out of the water, would drown. A floating entity aptly named the Grim Reaper would then appear to escort it to the afterlife.

I convinced my sister death was the only way to remedy Simone and Evan’s relationship. She allowed me to log into her game and stick Marie, Marissa, and DaNaisha into a doorless room with only a refrigerator and an oven. I had them take turns cooking, filling their exitless room with smoke and filth. It didn’t take long for Marissa to catch fire. She perished quickly, and her tombstone appeared just outside the room. The death of their housemate drove Marie and DaNaisha crazy. They sobbed, throwing their hands into the air as if they were trying to communicate with me. Without a bathroom, they pissed themselves. Hungry, they kept trying to cook. Eventually, DaNaisha also passed, leaving Marie alone in the charred room, banging on the walls, hoping for escape.

> I convinced my sister death was the only way to remedy Simone and Evan’s relationship.

When I next returned to the game, Marie was feverishly speaking with a man in a doctor’s coat and large comedic glasses. This character, the Therapist, appears to Sims in times of distress. It took one more day for her to finally die as well. Like any good Creator, I tidied up the place, deleting the room I had trapped them in and building a small gate around the three tombstones that were left in its absence — a memorial.

Back at the other house, Simone was crying and mourning Marie day and night. Evan pretended to care but secretly laughed at her. Things were not getting better.

DeAngilo, deeply amused, suggested I move Simone and Evan into Marie’s abandoned house, which was bigger and nicer than theirs, with a backyard and a small pool. This proved to be my final mistake. Evan fled on their first night in the house when Marie’s ghost appeared as he was making dinner. Simone, excited to see her dead lover once more, began to talk to the ghost, confessing her eternal love.

> This proved to be my final mistake.

Marie haunted Evan, sabotaging his activities and popping out from walls to frighten him. Simone continued to mourn Marie, and eventually the Therapist appeared for her as well but was unable to help. She was in love with a phantom. Exhausted and disappointed in my ability to fulfill my vision, I started to cry.

I was not crying for Evan or Simone, or for Marie or her housemates. I was crying for me, for all the pain I had tried to condense into a small, manageable world. For the home I had been ripped from, for the city and the friends who would continue to fade the older I got. I cried for the child I knew I could no longer be and for the god I had played the role of so poorly. I cried because change had finally found me, and I had nowhere to hide.

Preparing to delete the game, I curled up in the small corner of the house where the computer lived, watching Simone. Sitting at her desk, feverishly typing away at a novel she was working on, she had on formal wear, as if she anticipated something big was on its way. I let her write for a while, curious about what type of world she was creating. Somewhere in the house Marie fluttered through the walls; in the kitchen Evan was creating an extravagant breakfast. Eventually Simone paused, pulling away from the computer. Slowly, she raised her arms above her head to stretch, and before she could even lower them, she ceased to exist.

*Gabrielle Octavia Rucker is a writer from the Great Lakes. Currently she lives in Brooklyn, where she can often be found on the subway aggressively cursing under her breath.*