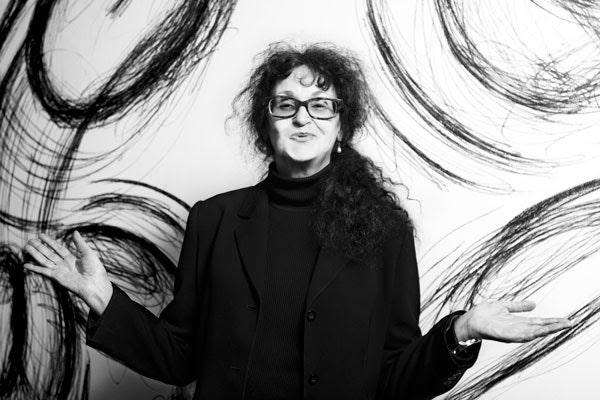 It wasn’t until decades later, in 2008, that gallerist Mitchell Algus gave Bernstein a solo show in New York and Paul McCarthy fell in love with her work and exhibited her at his West Coast gallery the Box. Suddenly, Bernstein’s long-underrated art was being given positive reviews at contemporary galleries, and from there, her textured penises, anti-war paintings, and vaginal icons made their way into the collections of the Whitney, MoMA, and the Jewish Museum, among others. Today, the art world is just beginning to recognize Bernstein as a trailblazer in erotic art, and her work that was once relegated to storage has a newfound audience.

Bernstein has a new exhibition titled “Dicks of Death” at Mary Boone Gallery in January. We sat down in her cluttered, dick-drawing-filled Chinatown loft to discuss how the meaning and acceptance of her work has changed over time.

**Hazel Cills:** What sort of work can people expect to see in your new show?

**Judith Bernstein:** I had a show in the spring called “Birth of the Universe.” All the paintings were about women being the center, where they should be! It was about depicting how the universe started using, frankly, big cunts. I use that word because it has a sort of shock value, but it’s also something when, if used many times, it becomes less shocking. It was about the birth process and the Big Bang, so there were a lot of sexual metaphors.

The show that’s opening on the 9th of January is actually much more geared toward another time frame. It’s tied to my “Fuck Vietnam” work but also includes work that addresses the present. It’s called “Dicks of Death,” which is actually a slang term the army uses for “franks and beans.” There are works like my 1968 piece _Union Jack-Off Policy on Vietnam_ , which was about a lot of rage and the draft, using a lot of sexual metaphors and castrated penises. But I also have new pieces that address the political situation currently. It’s a show that’s very geared toward warfare.

**HC:** For decades, your work was under-recognized. But in the past few years, it’s been having a resurgence. What do you think has changed in the industry for museums and galleries to now pay closer attention to your art?

**JB:** I think the times have caught up to my imagery. The vernacular is much more sexualized and direct, and my work is very direct and in your face. Chris Dercon, who was the director of the Tate Modern, said to me: The reason people are gravitating toward your work now is because of the past work. The past work doesn’t interest people unless it’s appropriate for this time frame. With the cunt-face works and these political works, all the imagery is still relevant. And my work is also funny. Humor cuts the edge; it makes it fun, and it makes it something you can laugh at.

**HC:** I read before that you said in the 1970s people aligned you with a “feminist art” movement but that many women did not actually embrace you. Can you tell me more about that lack of embrace?

**JB:** I came from a very small town. It was a banal, middle-class, not a privileged upbringing. I went to Penn State in 1960, and there were three men to every woman. And then after that, I went to Yale, and it was almost all male. Then I graduated, and the art galleries were all male in terms of the artists that showed. When I came out of Yale, Connecticut College for Women offered me a job for $1,000 less than a man, and they said the only reason they wanted to interview a woman was because they wanted women in the class to model nude. So that’s the time I came up in. still has a long way to go, but it’s a hell of lot better in art than it was at that time.

Four women at the time got the idea that they wanted to start a women’s gallery. It basically became A.I.R. Howardena Pindell suggested we name it after Jane Eyre, but I suggested T.W.A.T.: Twenty Women Artists Together. I was very ahead of my time! But even at the time, I didn’t take myself seriously for that title, though it would have been funny. But there were a lot of women who were part of the system that really didn’t like feminist artists. “Oh, they’re not as good as the guys,” they’d say. Or “If you’re really good, you could be in a gallery.” It was very patronizing. A lot of women supported my work, but within the “women’s movement” there were a lot of non-supporters because they didn’t think it was self-referential enough. If it wasn’t a cunt, it was not feminism.

**HC:** Hearing you talk about your work, you’re very open to a wide range of different interpretations. Do you purposely want the meaning of your work to be so fluid to viewers?

**JB:** I think there are a lot of different levels. In my work, I reference the celestial levels, like my interest in the Big Bang and the birth of the universe. My work also references some paintings from the past. I also am interested in a sort of female, primal scream, the (1). But it’s not only my interpretation, it’s also the interpretation of writers, artists, and critics. When people think they have all the answers, that is so wrong. I do the work, and you can make the judgment. It’s the same thing as when Georgia O’Keeffe made those flowers and said, “Oh, they’re not vaginal.” Well, she can say whatever she wants; it doesn’t mean it’s not there. That’s the way art is! It takes on a life of its own once you complete it. That’s why it’s wonderful.

**HC:** It seems like you don’t just want people to bring their own meaning to your art alone, it feels that way specifically with the concept of the vagina and phallus. I don’t just see phallus equals male, vagina equals female when I look at your paintings. I see them as representing war and rage and birth and a whole range of other meanings.

**JB:** For such a long time, I used the screw, and being screwed, as a metaphor for war and feminism and sex. And when I was younger, I was blaming men for war. But I don’t feel that way anymore. I think women also have a lot of rage and hostility. For example, Hillary Clinton may be much more pro-war than Obama. We’re really on a continuum. Sexuality is much more interesting now. It’s not just straight and gay, it’s a whole range now. It keeps changing and it’s absolutely wonderful.

There are so many other things this work brings up. Graffiti can be deeper than you think. When people are in the bathroom, their mind is going somewhere else and they’re going into the subconscious. In that sense, the subconscious is a big factor in my work, as it is in surrealism. It’s about war and birth and the overall relationship between men and women.

**HC:** In contemporary art right now, this idea of a “female gaze” is becoming more popular, this idea that people are further realizing how women were painted by men in the canon and trying to counteract that. Do you identify with that phrase?

**JB:** I do identify with the phrase, but I look at everything in different ways. So it’s not just the female, but it’s also the male. It’s not: All women feel this way; all men feel this way. It’s more complex now, and it’s wonderful that it’s complex. I can’t speak for all women; I’m speaking for me! I can’t speak for all feminists. But I do think there is a female gaze, but it’s not rigid at this point.

**HC:** In the earlier years, when you weren’t being recognized the way you are now, was there ever a moment where you thought, _I’m going to have to chang_ e?

**JB:** I’ll tell you: I was depressed as hell. I thought this was my whole mission. There were 25 years before I had a one-person show in New York. At a certain point, you think, _This work is so great_ . _How come someone doesn’t feel that way?_ Then you keep thinking you’re delusional! Because so many artists who do terrible work think their work is fabulous also.

**HC:** What advice would you give to artists, young or old, who are still waiting to receive the recognition they think they should be getting?

**JB:** This is something they have to deal with. This is a club, and it’s a very small club. I know I was locked out for a long period of time. I supported myself for 30 years with part-time teaching jobs. There may be many artists who will get their dues later or when they’re older, but maybe they may not. That’s not meaning I don’t sympathize. I’m mostly talking to the older artists really. The younger artists have a lot more time. They don’t know how their imagery will change, what connections will happen.

The older women artists, it’s very sad. I thought I would die and all my work would be never shown, never seen, or thrown away. This is a sad comment, but this is the feeling many women may feel who are older women artists. Not everyone gets what they want, let alone from the art field but from life. Period.

_Hazel Cills is a culture writer and journalist living in New York._