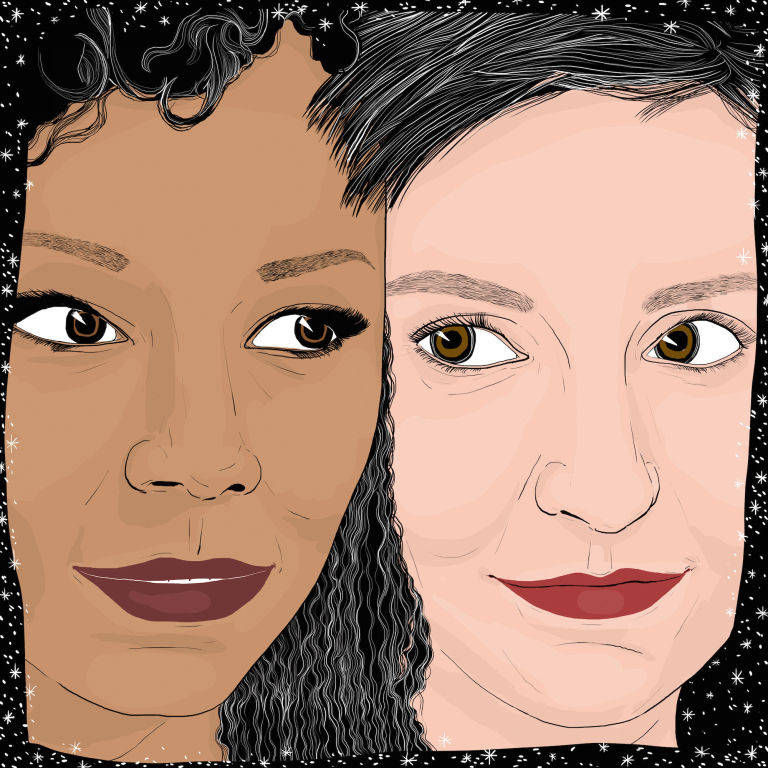 My podcast Never Before sprung from a bacon-filled breakfast with Lena Dunham in 2014.

It was the first time we had met IRL. We had spent months exchanging DMs and emails after reading one another’s memoirs. I sat nervously across Lena, who was at ease, completely herself. I admit that I was trying my best not to side-eye her as I wondered why the hell this white girl from HBO wanted to break bread with me.

I had admired Lena from afar, deeply envious of her consistent productivity, from *Tiny Furniture* and *Girls* to her best-selling book and her *New Yorker* essays. Still, the headlines documenting her public fuck-ups often times overshadowed her work. But Lena eventually disarmed me largely by being herself — open, eager to do well, and more willing than most to own her shit, shut up and listen, learn, and aim to do and be better.

In the end, though, she’s just a good friend. Lena’s the first to send a congratulatory text, the first to like your glowing Instagram selfie, the first to lend you her exclusive VIP shopping-discount codes. Over the past three years, we’ve grown into the kind of friends who swap gossip and Rihanna updates and the kind who check and challenge one another.

Lena and I have never spoken publicly about our relationship — partly because most of my followers cannot stand her — but largely because it’s ours. It’s something we hold close as women who do much of our work under the public’s gaze. And yet, Lena is the executive producer of *Never Before*. She’s the woman who pushed me to create the space that I wasn’t being given on television for intriguing, full-fledged, unapologetically political pop-cultural conversations.

So it was only fitting that I have a talk with the woman who was integral to the show’s creation. Below is an edited excerpt from Lena’s episode on Never Before, where we embark on every controversy, every learning moment, and every apology. I’ve always been curious about what accountability looks like when you mess up so publicly and so often — so I go there with Lena as we discuss Odell Beckham, her sibling, Grace, and that time she said she wished she had had an abortion (1)).

We begin our conversation by talking about the effects of Lena’s early success.

__Janet Mock:__ *Girls* launched you into this hyper-visible space where you were seen as an emblem of an entire generation of young women. I wonder, does fame stunt you in a way that you’re stuck at 24 forever in a sense?

__Lena Dunham:__ In ways, I feel 100 years old. When you take a lot of public heat … I’ve had public scandals around my family, around my sexual assault. Both public scandals around things that were and weren’t a result of my own ignorance. I will take full responsibility for all the times that I popped off on Twitter and didn’t think about what I was saying, but there was also a lot of times where my very identity and the core of who I was were questioned, and it really felt like being steel stuck in a fire and you’re made stronger.

Over the last six years, I have had really serious health problems because I have endometriosis. When you undergo five or six surgeries in your twenties and have the experience of your body basically revolting against you — I was on enforced menopause for two years. I’d looked around at other twentysomethings and I felt 100. I remember once going to a book fair with my dad and looking at a couple who were eating tacos and buying comics and just crying because I was like, I never was that, and I’ll never be that. My boyfriend and I will never have that experience. We’ll never sit anonymously on a corner eating tacos.

There’s the ways in which I feel wise and ready, and then there’s also the ways in which I feel like my friendships that I had when I started the show until I finished the show this past August, I didn’t have any ability to look at them critically. I felt like socially, I was a creature trapped in amber who would accept anybody who was interested in me. I allowed a lot of energetic leeches into my life. At the time, I didn’t think I was taking in all the criticism, but I felt so beaten down by it that anybody who would say to me “I like you. You’re a good person,” I let those people in, and I think it made me sicker.

__JM:__ Why do you still care what people think of you? I feel like a lot of people who don’t know you and who aren’t in life with you don’t understand that piece of you that cares so much. There’s a deep investment in ensuring that folk are included or heard and wanting to be seen. Not to justify any of the public missteps and mistakes, which you’ve rightfully owned up to, but there is a part of you that’s like a bleeding-heart progressive liberal who wants everyone to feel included. Where did that come from in your own experience?

__LD:__ I think a few things. One is I was raised in a really liberal community. The New York art world is a super-white community, but it’s a community that has a strong investment in making sure people’s stories are heard. My mother lived through the civil-rights movement and Vietnam and was protesting her face off before Roe v. Wade. Those are values that we were raised with. I also think when you feel disenfranchised as a young person that you can go two ways. You can grow up and become a fucking bully, or you can grow up and feel a really, really strong need to not see other people suffer that way.

It’s not like I think of myself as some angel who wants everybody to have a chance. Clearly, I’m like very, almost selfishly, devoted to my own work, and to my own voice, and to my own style, but it really, really matters to me that mine’s not the only voice. In many ways, after six years of *Girls*, I’m sick of my own voice, but I’ve also always wanted to be really careful that I didn’t try to project … I didn’t try to seem like I was making up for my sins by bringing everyone—

__JM:__ You didn’t want to perform wokeness or perform—

__LD:__ No, because it’s like, people are smart. They would get it if I was on my fucking Twitter with a bunch of Haitian children and a Black Lives Matter poster. That’d be so wack. All you can do is put it into action.

It’s really been an education for me to be like, “OK, messing up is a part of being human and it doesn’t take away from your humanity.”

__JM:__ Something that I’ve always found so intriguing about the particular space you take up in the cultural and political conversation is that you’re equally as polarizing on all angles of the political spectrum. Except for your core audience who loves you endlessly, which would be largely young white women who are fighting for reproductive justice, who are feminists, who are struggling with body issues.

__LD:__ A lot of people who relate to me are people who are dealing with issues of body positivity and fat-shaming. Also, I think a lot of people who have suffered in abusive relationships or experienced sexual assault have come forward and and talked to me about how my being vocal has meant a lot to them. Besides that, bets off as to who’s down and who’s not.

__JM:__ I admire your willingness to not just be open and vulnerable, but to make mistakes publicly. What is your process like when you fuck up?

__LD:__ Obviously, I’m defensive like everybody else and I don’t like to be called out. It doesn’t feel good. Ask my boyfriend or my parents, I don’t handle criticism well. If my parents found my homework and it wasn’t finished, they’d be like, “You didn’t finish your homework,” and I’d be like, “You’re terrible parents and all you do is travel.” I would always turn it around on them, so it’s really been an education for me to be like, *OK, messing up is a part of being human and it doesn’t take away from your humanity.* In fact, it adds to it.

Usually I do a gut check. I read through the criticisms, and I just go, like, *Do I feel in my bones that these people are right and this warrants an apology?* Both intellectually and spiritually.

__JM:__ What constitutes a strong, fair, redemptive apology for you?

__LD:__ I never really think about the concept of being redeemed because, to be totally frank, I feel like I’m so far past that with so many people. I don’t think about it as a way to get people to like me again. I think if you do that, something really inauthentic comes out of you. I just think about it as a way to show that I understand. The first thing that I say is “I’m sorry,” because you need to say that clearly without any ifs, ands, or buts.

__LD:__ It’s not “I’m sorry if that hurt you, but you were really rude to me and you didn’t serve enough Chardonnay.” It’s “I’m sorry. Here’s why I’m sorry. Here’s the critique, and here’s what I recognize about the critique. Here’s how I’m going to do better in the future.” That to me is just the road map. I don’t then look at the comments to hope that everyone goes, “You’re forgiven.” A lot of the comments are “You’re still a piece of shit,” and I’m like, “Great, but at least I’ve told you that I hear you.”

*Janet Mock is the author of *Redefining Realness* and the new memoir *Surpassing Certainty*.*