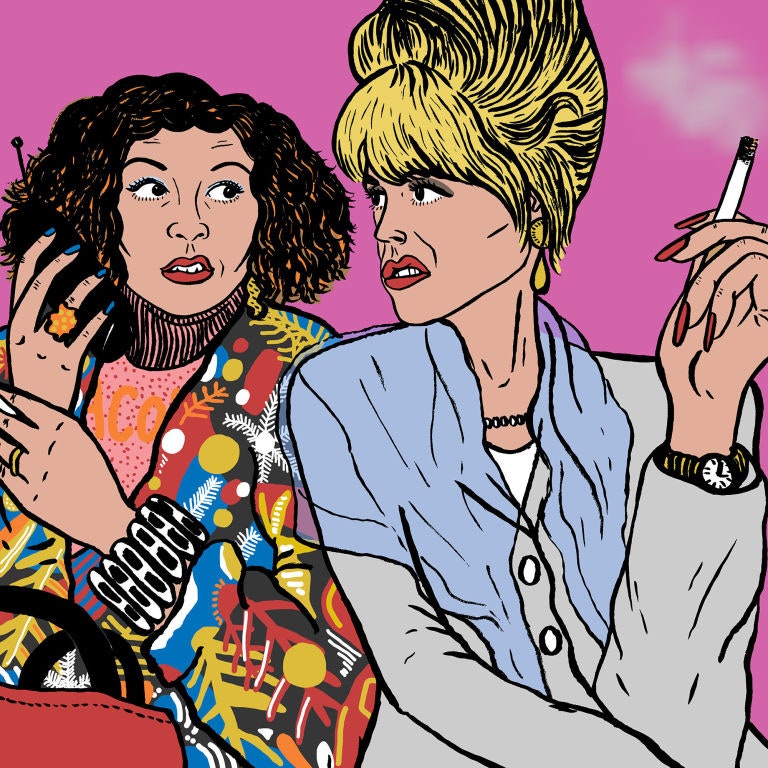 I first laid eyes on *Absolutely Fabulous* at age thirteen. My friend Gabe introduced me to it. We may have been a chubby girl obsessed with rabbits and an openly gay aspiring stylist, both too young to take the subway alone. But we felt like *Ab Fab* heroines Patsy and Edina — the obstreperous fashion-frenzied duo of fabulous British drunks, portrayed by Jennifer Saunders and Joanna Lumley — were speaking directly to us. Their behavior may have been motivated by abject greed, a hunger for tabloid fame, and several snootfuls of cocaine, but they were hilarious, self-actualized, and totally obsessed with each other. The only people who didn’t seem to notice they were freaks? Them. It wasn’t just funny. The show inspired a kind of take-no-prisoners approach to middle school that we desperately needed, and it came in the form of these VHS tapes.

Patsy and Eddy — or as they like to call each other, “Sweetie Darling” — have been destroying our screens for over two decades now — and fans are still clamoring for more. An *Ab Fab* name drop still means you really are the crème de la crème of fashion and/or useless celebrity. My only goal on a recent trip to London was to meet and interview Jennifer and Joanna, and meet them I did: Jennifer in the mirrored bar of a chic hotel where she insisted we order Champagne (on brand and wonderful) and Joanna at a very British tea room, where she presented me with violet chocolates, in keeping with her reputation as England’s most polite and esteemed grande dame. We edited and combined their interviews into one sassy little package here.

Both Jennifer and Joanna are stylish, warm, and standing in total opposition to their characters, but the twinkle in their respective eyes let me know I had Patsy and Eddy in the flesh. We talked defying reputation, women behaving badly, and writing what you know. It was, indeed, absolutely fabulous.

__Lena Dunham:__ Jennifer, how did the concept of Patsy and Edina appear to you?

__Jennifer Saunders:__ Edina came because fashion was just becoming big. People kind of knew Gucci, who Gucci was. It was unusual, but people were just starting to hear those words, Gucci, Prada, all that. I knew a fashion PR, and I thought, That’s a genius job for a sitcom character, so we did her as a sketch. We also had another friend who had an absolutely bonkers mother who was eccentric and wild, and me and Dawn just combined the two. Edina came in the sketch, and then I had a different idea for Patsy. I thought she would be this low-life journalist, this hadn’t-changed-her-pants-in-a-week sort of weirdo.

And then someone said, “Well, why don’t you get Joanna Lumley to do it?” And the second we had her, we had all her background, which is a very successful model. She gets the joke of herself, so the second you’ve got that and you’ve got someone who the whole nation is in love with, and who is absolutely lovely and beautiful, and you get her to drop her pants …

__Joanna Lumley:__ The fact that I’d been a model was useful because I knew how were and could bring all sorts of the ridiculous elements of modeling. It’s like plays. You sometimes have to do things, say things, you don’t believe, but you’re in the play, so you believe it. It’s divine but utterly ridiculous. Also because of the vague rock-and-roll element — Jennifer and I knew rock and rollers and had had some time in the ridiculousness of that world. All I really wanted to do was to make Jennifer laugh, because I’d heard if she laughs that’d be good, and then we could go on.

__LD:__ Joanna, when you had started as Patsy, you had this very specific sort of upright reputation in the UK, and so it was such a departure from what you were doing. I wondered how you felt that reputation had been formed and how you felt about the opportunity to break it?

__JL:__ The parts I’d gotten was, well, one was quite a long-running show called *The New Avengers*, which was sort of a heroic character who had two male sidekicks. I would fight, and I was good with a gun, and I could kill men, and every week we saved the world. And then I a kind of forerunner of *The X-Files* where I played extraterrestrials who came down in human form to help sort out bad things that happened.

These sort of characters stick to you a little bit, and then you get offered more noble, heroic, upright . And when I started in comedy, I had done heroics for so long, or just pretty girlfriends, or nice women, wronged women, or attractive widows, or some dull stuff like that, so getting that script from Jennifer was just heaven.

The only thing that redeemed them was that they were so dreadfully funny.

__LD:__ You two really pioneered the idea of women behaving badly on television. Joanna was always playing paragons of goodness, and there were such strict ideas about what women could and couldn’t do on television. Did you feel, at the time, you had to push back against an expectation?

__JS:__ I didn’t think it with *Ab Fab*. I think we sort of encountered it a bit with French and Saunders. I remember sometimes reading a review and going, What was offensive about that? What did you not like about that? We would be playing fat guys or women, or whatever, and I remember seeing people going, “Well, this is completely wrong, and why are they doing this?”

__JL:__ I think were the worst. I think they were. I think shows had cheeky girls who were sort of slightly naughty or slept over at their boyfriends’ or did little tiny things.

__LD:__ But Patsy and Edina, who are unapologetic, drug-taking, alcohol-swigging …

__JL:__ Utterly disgusting. I mean, really vile and dreadful. Quite cruel, dishonest. The only thing that redeemed them was that they were so dreadfully funny. But also we hoped that people would see them and just go, “Oh my God, how awful.” And some people would queue up to say, “My mother and my aunt are just like you and Eddy, and this is a picture of them.” And you go, “Oh, no, how great. Well done, you. But oh my God, we are awful.” And they went, “Oh, yeah, they love it. They go out, they get drunk.” And you go, “Oh my God, we weren’t trying to teach people to get drunk.”

So anyway, Eddy and Patsy turned out like people who really existed, and I don’t think we had expected that because we painted them with such broad brushstrokes. We were trying to be high satire.

__LD:__ I think it’s one of the most important satires, and I wonder if you feel like people always understood. Something I have experienced a lot in my career is that when men do things, it’s considered satire, and when women do things, it’s considered a projection of their personalities. I wonder if you felt like people understood the level on which the show was operating as a commentary on feminine delusion, and upper-class delusion, and all of that? For me, you two are the pioneers of allowing women to fall out of taxis. I would definitely not be throwing up on myself on television if it weren’t for you two.

__JL:__ Strangely enough, when we started, people were like, “Oh my God, those women are dreadful …” The world then turned so that people began to almost outstrip Patsy and Eddy at vile behavior. not just being funny. I mean, Lucille Ball was very funny. Phyllis Diller. You have great comedians. But we were truly repulsive. You know, our pants came down and stuff.

__LD:__ Something people talk about a lot in the U.S. is the idea that women aren’t necessarily bringing other women along with them. And you’ve both been so supportive of your younger female costars with the kind of love and education you give them. Did you feel taken care of by older female actors and comedians when you were younger?

JS: I can’t remember to be honest, and I probably would say no. I think the world has changed so completely in how women relate to each other and the way the whole thing operates. I mean, I notice how my daughters have their close friends, and it’s much more supportive and much closer.

JL: I remember doing a really crappy film. It came from a stage play. The stage play was mildly funny, but only because it had a really good, proper actor who I was doing my funny scenes with. When we came through the film, it was an older actress, a comedian, who wasn’t in the play but was now in the film. There was my name mentioned on the poster, and I could remember saying in front of me, “Why is her name on here? What’s she doing up there?”

And I thought, I was actually in the play as well. I was in the stage play and am now redoing my character. I didn’t ask for anything. I never ask for anything. I never ask for billing. I couldn’t give a damn about it. And she was angry with me because my name was on the poster. It wasn’t in front of hers, but on the poster, and I thought, You are a bitch, actually. What a weird thing to hate. you looked at the new ones coming up, thinking, Would I be displaced by that person? Are they lovelier than I am?

__LD:__ I can’t believe it’s been almost 27 years since you guys started doing *Ab Fab*. Last year you even released a new movie. Was it in any way a question for you of “Do I want to do a movie? Do I want to return to this?” Or do you feel like the characters were always close to you?

__JS:__ Well, it’s not a hard decision to go back to it, because in our heads, they’re never that far away. Joanna and I enjoyed being them so much. But it’s a hard decision to know how many other people can influence it and what it looks like.

It’s quite hard, and you think, Yeah, but we are different now. The only thing you can do is make sure that the characters register that and that the people around them register that, so that it doesn’t feel that you’ve ignored it.

__LD:__ It’s so exciting that your audience has gotten to grow with Patsy and Edina.

__JS:__ I think it makes a difference if — like you do — you write the stuff, too, because you move on with it, you don’t repeat stuff. You develop the characters, and I think that’s the difference. I think a lot of sitcoms get stuck because the writers just do the same joke again and again.

__JS:__ Exactly, because even in the writing, I thought, There’s nothing specifically to nail it to apart from the fact that they can’t keep up, that they are dinosaurs in this world now. It’s always best just to write about what you’re thinking.

*Lena Dunham is an Edina for sure.*