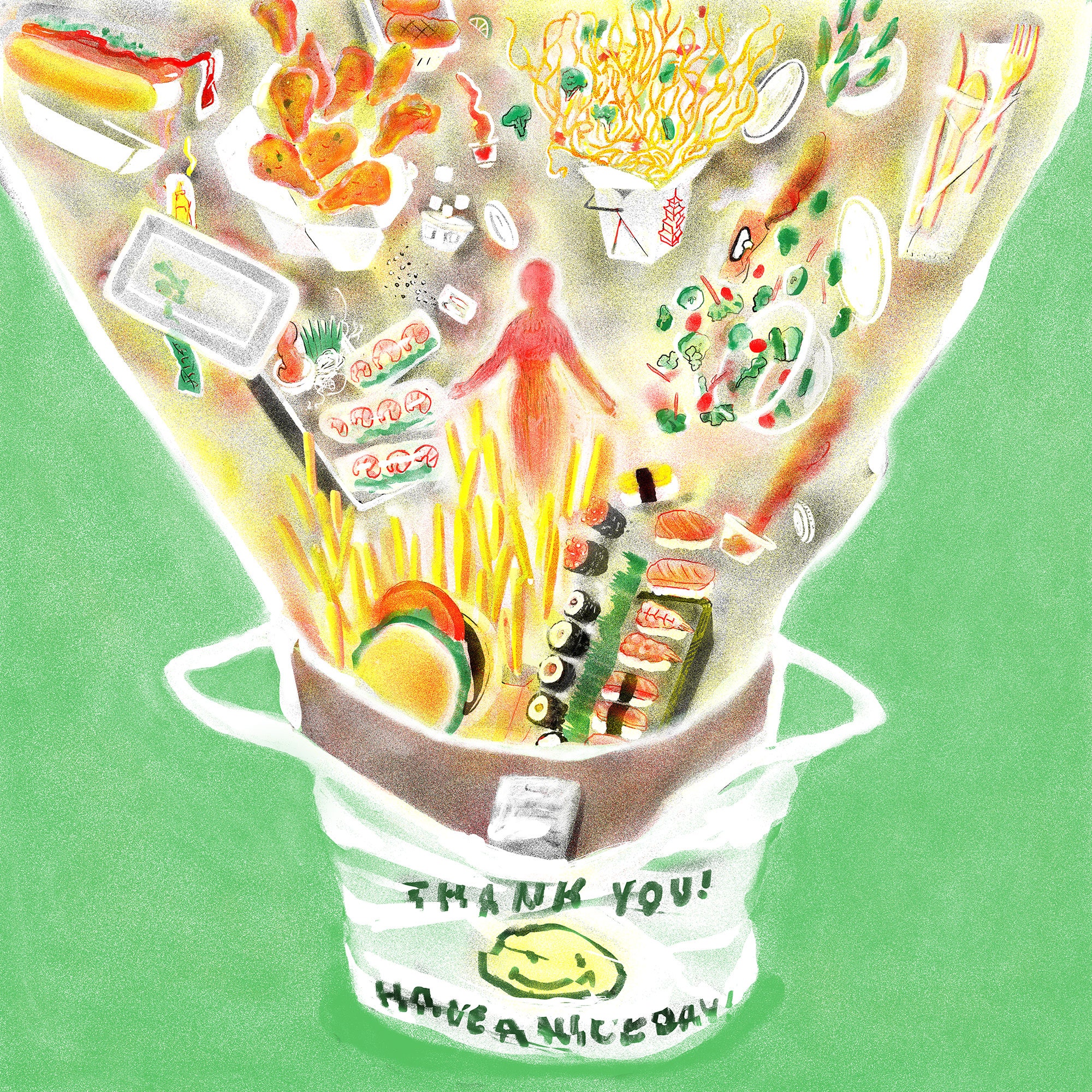 I’m gonna start this piece the way I start most days: by blaming my mother.

Well, first I’ll list some of the things she excelled at: protecting us from harm, explaining adult concepts in ways that didn’t terrify her children, organizing treasure hunts in and around our home, pretending her hand was a pet alligator named Ally, and defending us at parent-teacher conferences (you haven’t lived ’til your mom has told your middle-school theater teacher she has “no sense of true art”).

She taught me the concept of a mental-health day in second grade. She made every weeknight an act of rebellion and every weekend a safari through the city, and the only people she ever got angrier at than us were those who didn’t recognize what she believed, despite any clear evidence, was our Mensa-level genius. “Average intelligence my ass!” she screamed as she ripped up my lengthy ADHD-testing report. She picked the chicest items in the Delia’s warehouse-sale catalog and the best nail polishes from Wet n Wild, and she modified McDonald’s orders so they had “more flavor, less filler.” She let me wear her sweaters as dresses. I may have been the last to lose my virginity, but I was the first to have pink hair. She was Cher in *Clueless* and Cher in *Mermaids*. She was magic.

This is all, of course, a lead-up to what she DIDN’T do: sit through school plays, listen when we read our poetry aloud, get off the phone, ever, or cook. She didn’t cook.

She will fight this assertion like a Long Island–bred samurai. She will say “I slaved over a hot stove just like my Russian grandmother!” She will remind me of the Chez Panisse cookbook that sat behind the answering machine, and she will ask, “Were you ever hungry? No, no you were not, because I COOKED.”

But her definition of cooking is wildly skewed, and therefore so is mine. Defrosting a hamburger patty for my father to pan-fry? Cooking. Frozen tortellini? I mean, if you talk on the phone then suddenly realize the water is boiling over in a blaze of expletives, it’s al dente! And, the worst offender of all, a snack of raw cauliflower paired with a cup of mayonnaise with cumin in it. (Even she can’t defend that one.)

I never judged her for it. Instead, I became obsessed with takeout. The joy of picking your variant of Chinese chicken, the luxurious reveal of the congealed contents of the carton. To this day, though I’ve had some beautifully appointed, home-cooked meals by caring and immaculate friends, nothing can match the thrill of a plastic bag of possibility.

In my twenties, it was easy to excuse the constant ordering. I lived alone, worked bananas hours, and often forgot to take my jeans off to sleep. For a brief but terrifying time, I even took to ordering a muffin and placing it by my bedside for the morning (cereal + milk = manual labor).

The circumstances of my life, combined with a penchant for using processed food as a sedative (that’s another article), meant takeout was my religion. I could have anything I wanted without speaking to anyone. Summer rolls AND a hamburger? I’ll take it all, like some willful child dictator sitting upon a throne of wrappers and receipts.

But as I started to spend time in more adult homes, it was becoming clear this was not the norm. I had been busy declaring home cooks to be people with random time on their hands while I comforted myself picturing working families picking up a bag from Boston Market. But it turns out that some of the world’s busiest people — people raising kids on their own while holding down two jobs —were finding time to shop for and make their own food, an approach that is altogether more sensible, not to mention affordable. And if they could do it, what was my excuse? After all, Jenni — someone whose career I have a pretty solid sense of cuz, you know, it’s a shared career — not only cooks for her children nightly but also cooks TO RELAX.

With this new awareness, my own appetites felt excessive, almost immoral. It was one thing to be starving. It was quite another to be so fucking lazy about it.

Add to that a desire to have a family and a cursory glance at the Science section of the *Times* (*added sugar is murdering me slowly?*), and you’ve got yourself a conundrum. We all know home cooking and shared meals are age-old ways to bond and unite our clans. We also know that by cooking you can control what’s being put in your food and your children’s food. The first tenet of many diets is “Start preparing your own lunches!” Why don’t you start preparing my grave?

But when I can no longer use my busyness as an excuse (we’re all pretty busy), how do I explain away my non-desire to prepare healthful meals?

The same way I’m learning to explain so much to myself: I just don’t want to. The thrill of a sizzling pan? Lost on me. Pinches of spice? Far too restrained. Raw meat? I can’t.

For many years I didn’t consider “I just don’t want to” a valid excuse. And for many things (hearing your friend out after a misunderstanding, helping make our world a better place), it really isn’t. But our goal, as actualized adults, is to lean toward the things we are passionate about and to spread joy using our specific skill set.

For example, I benefit daily from my own thrifty creativity, my excellent taste in weirdos, my ability to handle blood, vomit, and even the unspeakable third substance, and my passion for essential, overlooked media. My theoretical children will have janky but spirited theme parties and an array of radical aunts and uncles, and I won’t barf when they barf. They’ll know about Gidget and Moesha and the soundtrack to *Tick Tick Boom*, the Jonathan Larson musical that predated Rent. I’ll write poems for their lunch boxes every day, even if lunch is a sandwich we pick up in a Lyft (oh, yeah, I can’t drive either). I’ll keep them healthy with the age-old battle cry of Jewish American Princesses everywhere: “Dressing on the side.”

However, I admit I may need to know how to at least turn on a stove. My thirteen-year-old goddaughter, eating pizza in my living room and using her uncanny knack for zeroing in on adult insecurities, told me that I at least “have to learn about pasta, for an emergency.” This was after she led me, as confused and sweaty as I could be at Pure Barre, down the aisles of our local supermarket. “OK,” I conceded, because I will concede anything to her. And Jenni says a quesadilla is as easy as making toast (she’s going on the assumption I’ve made toast, but fine). But the beautifully roasted chickens and home-whipped cream will have to happen at THEIR godmother’s house.

And I like fantasizing about it, my currently imaginary children and I going to Pakistan Tea House with all the cab drivers changing shifts at 4:30 p.m. to grab the $5.99 vegetarian special. They’ll get really into the little bags of nuts by the register at Starbucks. I’ll say “Nothing like a street hot dog” as I fish around for cash and they wait expectantly. Maybe their friends will tease them about their lunches, like I was teased for having a buttered roll, an apple, and my own hot dog in a plastic bag. No one will want to trade. They can take it. I did.

Of course, fantasies are just that. I’m ready to get my ass handed to me by angry children. It’s gonna be for something, right? I’d rather it be for my meals than my politics. Lord help me if it’s both.

Ironically, it was when my sibling and I left the house that my mother began cooking in earnest. Just recently, I saw an Instagram in which one of her friends thanked her “for the delicious homegrown-tomato salad!” Who is this freak with a ladle, and what did she do with my mother?

Nothing if not surprising, my mother has recycled the time we once occupied testing the limits of her fantasy life and is now learning to make meals for the people she loves. The betrayal stings, but not as much as the burn I got the one time I tried to make lasagna. No apologies. I inherited my appetites and am almost ready to pass them on.