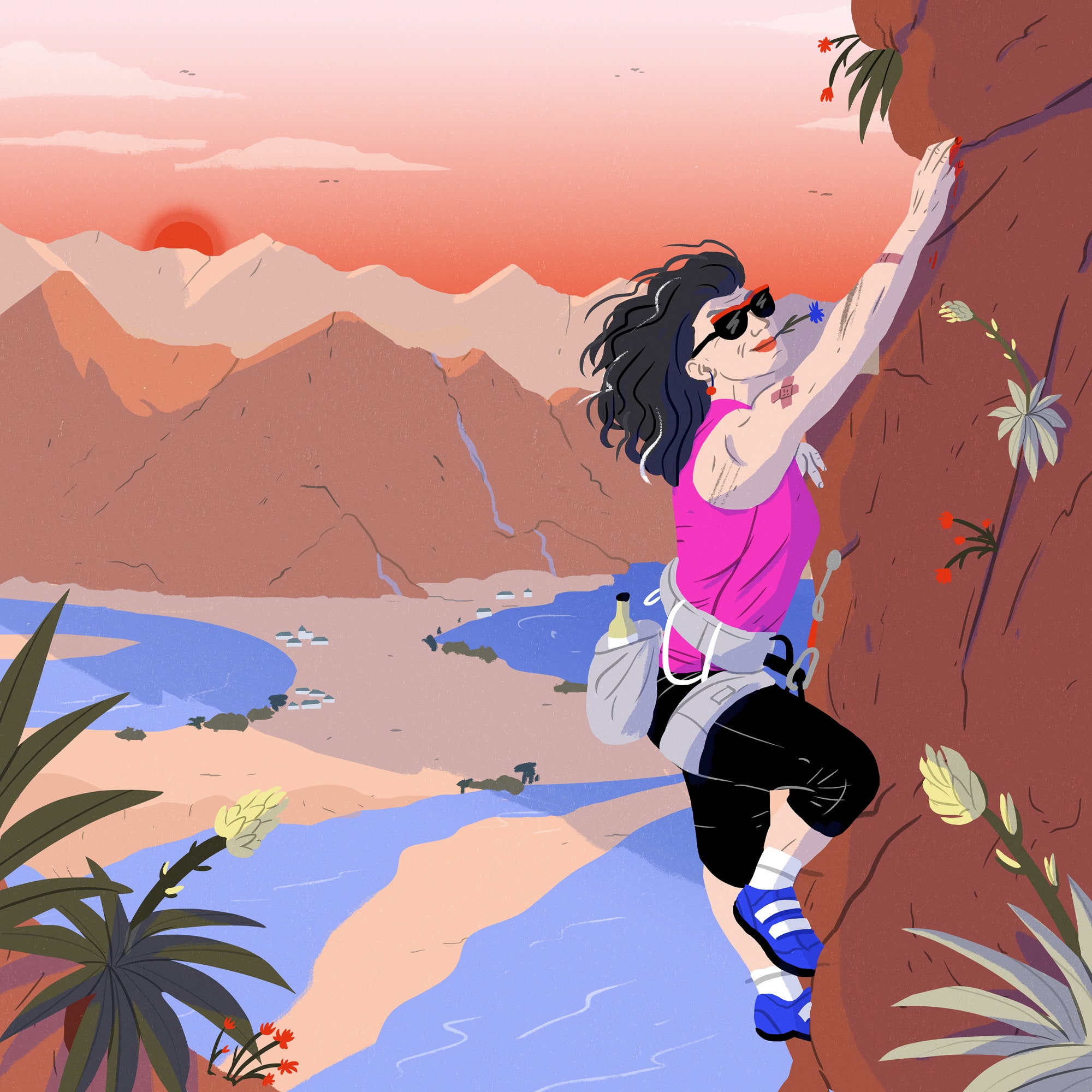 I’m clinging to a five-story slice of granite outside of Bishop, California, and thinking I may have run out of options. My right leg bounces with fatigue, and blood is trickling down my hand. Whatever advice my climbing guide is calling out dissolves into the wind. *Get her down*, I imagine my crew below saying. *She’s too old*.

I just turned 60, which I forget until moments like these when I’m hanging by my fingertips and wondering, *Can I do this?*

I glance down. The answer better be yes.

“Hey, where’d you come from?” I whisper to a seedling thriving absurdly in the rock. As I lean toward it, my left hand lands on a hold that wasn’t there a minute ago. The next move makes sense inside my muscles. I climb on.

Over the years, I’ve braced for the steady decline of getting old as I hit an invented sell-by date. I thought I’d wake up every morning sad, with a body that barely worked.

But here’s the catch: I’ve fallen crazy in love with knuckle-bruising adventure. And the surprise: I’m good. Like, really good. With muscles strong enough to kick my younger self’s ass.

As a kid, I loved the idea of sports but had no language to express my desire. It’s hard to imagine the world pre–Title IX, but before it was signed into law, girls were not welcome on a playing field, period. No one even pretended to get girls’ sports organized and funded. The young women who did play field hockey and soccer and who were already good athletes had to fight to play. Other girls with athletic ambition went out for cheer squad.

I wore glasses and was known for getting hit square in the face with a dodgeball. But then came a sports miracle: powder-puff football, a polite high-school affair where girls raised money for local charities by playing the game. Boys “coached,” and no one was supposed to be good.

It was perfect. Suddenly, the thing I hated about myself — my big shoulders and muscular legs — had purpose. We were instructed to grab the plastic flag from our opponent’s waist to signify a tackle. At first, I barreled into other players because I couldn’t grab the flag and also stop in time. But then I kept barreling forward because I could. I suddenly, and unconditionally, loved how my muscles pushed off the line and drove my shoulder into my opponent’s belly.

Even today, I can taste the emotional cocktail of fierceness, shame, and adrenaline I got when I plowed into the girl across from me and made her cry. We were reminded that this was to be a friendly game — fun for all — but I wanted more. I wore my bruises like some gone-wrong Girl Scout merit badge.

I loved that feeling. So I set out to see how I could reignite it in a sport girls were allowed to play.

After powder puff, there was my tennis phase, equipped with my mom’s Jack Kramer racket and a stack of “tennis made easy” library books. My boyfriend would smother me in advice until he got bored and wandered off to roughhouse with his buddies in the next court. Frankly, it was a relief. The boyfriend’s relentless critiquing made the sport more his than mine. I resented performing for him. And I missed the brute force of powder-puff football, where none of the guys cared enough to steal the sport from me.

Next, I took up surfing. A friend gave me her brother’s banged-up surfboard, but I was too shy to ask how you stood up. I spent most of that summer just bobbing beyond the surf break. But that didn’t stop me from putting a surf rack on my beat-up red Opel Kadett sedan. I brandished bravado instead of skill, and my cockiness almost made me drown. Believing my own hype, I said yes to a big-swell surf trip, paddling out into serious waves with my guy friends, only to be mercilessly rag-dolled back to shore.

Then came skiing. I sequestered myself on baby runs where I could pick my way down without being judged. When I fell onto a friend’s ski pole, skewering my lower abdomen, I refused to get treatment at the first-aid center because I knew the guys working there, and they were cute. My dad rushed me to the ER when I got home two hours later.

After my twenties, I became monogamous to skiing. It was a true passion. When it all goes right, skiing is like standing on the hand of God. Everything falls away except your breath, the shift of your muscles, the crunch of snow. Off the mountain, it becomes shorthand for assessing moral character. Eventually, I learned how to drill bindings and got a job as a ski tech. At a local mountain, I offered kids’ lessons in exchange for free lift tickets. The success of any romantic relationship hung on one question: *Can he ski?*

In my 30s, life blurred into a fast-forward tape — love, marriage, job, mortgage, graduate school, babies, new job, that argument, another Christmas, the flu, vacation, a mean boss, Dad dies, kids’ softball practice, grocery shopping. And just like that, it’s 25 years later, and I’m spit out on the other side of the sell-by date.

I didn’t mean to crush on climbing. But when my daughter invited me to a yoga-and-climb day in the Santa Monica Mountains, I fell madly in love. The warm feel of rock against skin and the whiff of danger as I pressed up the route, chased by a velvety release of adrenaline — the experience is almost equivalent to really good sex.

After the lesson, I drove straight to REI, bought one of everything, and then stopped at the local climbing gym to sign up for classes (then I had to go back to REI to exchange everything for what I really needed). I went home and binge-watched women climbers. I bought a pull-up bar. My husband built me a hang board. Now I’m all in.

My mother says one of the unwelcome surprises of aging is that you become invisible. She’ll be waiting in a grocery line and someone will step right into her, then look confused. “Oh, I didn’t see you there.” She says she’s learned to make herself bigger in public places so others don’t mow her down. Climbing refuses to let you be invisible. You’re up on a wall, alone, and you can’t change the subject.

“I’ll climb next,” I gingerly announce to my climbing partner and start to rope up. I stop myself from adding “I’m sorry.” I’ve promised myself I won’t apologize, but I’m only able to keep from saying it out loud. Inside my head, I’m thinking, *I’m sorry for being new, for not knowing the secret climbing rules, for making mistakes*. But once on the wall, one is obliged to own her truth: fear, doubt, embarrassment, exhilaration, and something impossible to savor in a well-curated life — surprise.

The night before my first climb, I spent hours figuring out what to wear so I looked like I knew what I was doing. The next day, I remembered everything except my glasses, which meant once I swaggered to the wall, I couldn’t see well enough to tie my own knots. My daughter did it for me, using the same soft voice I had used when teaching her to tie her shoelaces. *This is how it will be one day, her taking care of me*, I thought as she cinched the knot tight on my harness, giving it an extra pull.

After weeks of failing to reach a ridiculous hold, my arms suddenly connected with it, as if I’d always known how. *Where did that come from?* I wondered. *How did I do that?* My 60-year-old body still holds surprises.

Which makes me think: What else could I do if I were able to stop silently asking permission? Or if I ignored what I thought I knew about what might happen next?

Climbing has re-taught me that there is only right now. I may not have this strong body next week or next year, so I better get moving. I don’t have time to be shy or embarrassed or worry about what anyone else thinks.

So I’ve taken up surfing again. And when I walk down the beach and it’s me and every seven-year-old boy in the neighborhood riding those tame waves, I laugh.

*Debra Hotaling climbs, skis, and surfs in Southern California. Her work has appeared in the* Los Angeles Times *and* Los Angeles *magazine, and Hotaling was a regular commentator for the news radio program* Marketplace.