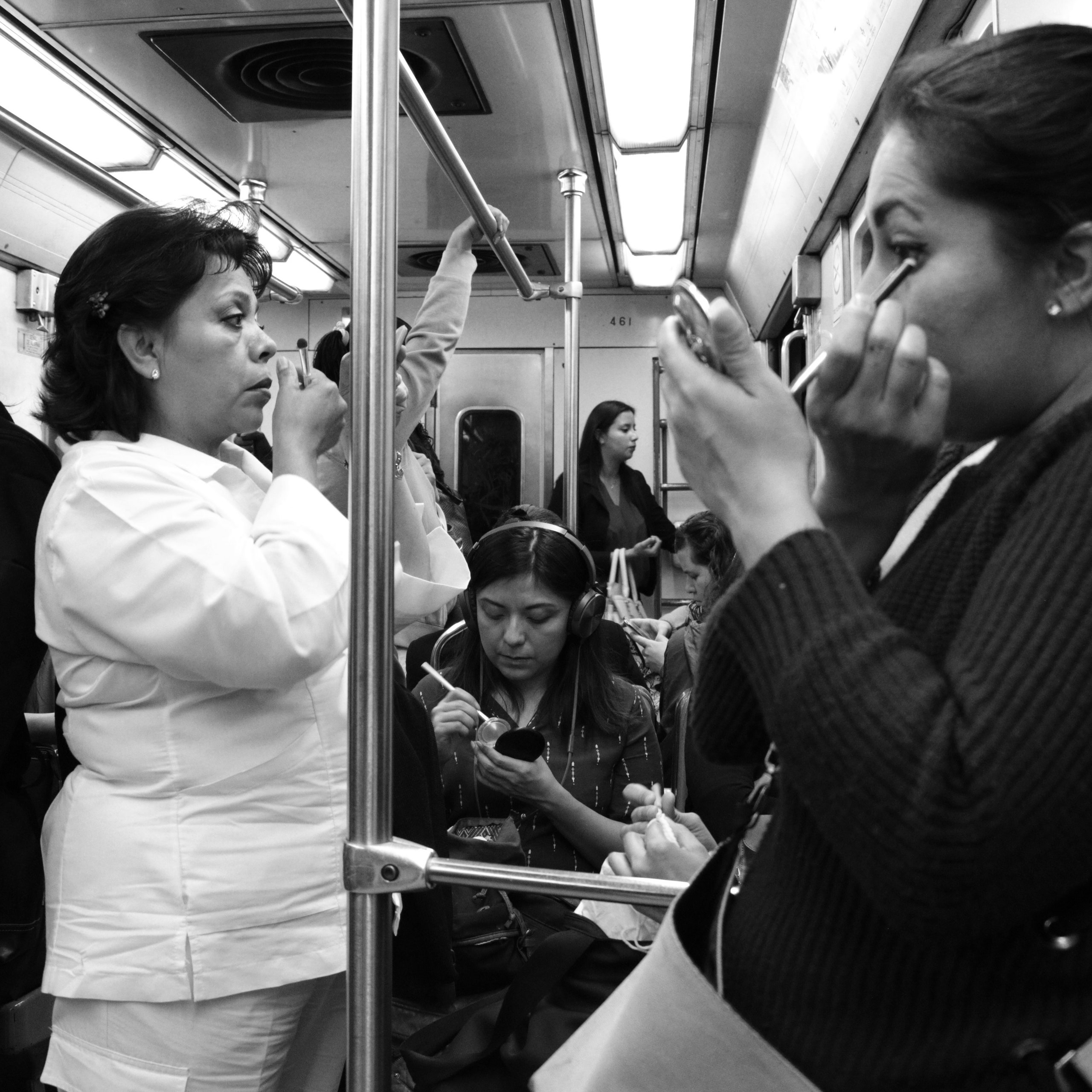 It’s Saturday morning, and my friend Marisol and I board the Metro, on our way to a family-separation protest on Paseo de la Reforma, a major thoroughfare in the heart of Mexico City. Marisol is a 21-year-old musician and a psychology student at the National Autonomous University of Mexico. Today, like most days, she carries her ukulele strapped to her back. We’re on the pink line of the Metro at Pino Suárez, and we have five stations to go. The subway this morning isn’t terribly crowded, but we don’t find seats, and she accommodates herself quickly.

Marisol props herself against the door between the Metro cars. She swings her backpack around to her chest and her ukulele to her side. She deftly unpacks her arsenal of makeup. *Isabel la Católica* — one stop down. Amid the lurches of the Metro, she whips out an eyelash curler. One hand curls her lashes, the other holds her compact mirror and various tubes of pigment. *Balderas* — two stops to go. She dabs on foundation, blush, two different tones of shimmering eyeshadow, and eyeliner. *Cuauhtémoc* — one more stop. She snags a seat to apply her mascara, which she does with her arms crossed, using one arm to keep the other steady. The doors ping open just in time for us to jump off. *Insurgentes* — we’re finally here. I marvel at the steadiness of her hands: *How do you not, like, leave stripes of mascara on your face?* She used to, she says, but now she’s a pro.

Marisol doesn’t do her makeup on the Metro every day, but she does when she’s running late, and recently, she tells me, she’s usually running late. She lives in Chimalhuacán, a suburb about two hours from Mexico City on public transit. For her, like many other women in the Mexico City metropolitan area, applying makeup in motion is a skill born from necessity and ingenuity. Workers in Mexico City have some of the longest commutes in Latin America, (5) The city is sprawling, but hyper-centralized: more than (6), where less than a fifth of the population resides. So each morning, the center of Mexico City, like a vortex, sucks in a majority of the population, and each evening, it spits them back out.

Mexico City’s Metro is the second-largest subway system in North America, just behind New York City’s. There are twelve color-coded and numbered lines, plus six lines on the Metrobús, a bus system that connects to the subway. Aside from the Metro, the city crawls with countless other bus lines. Just to get to the Metro, many workers first board a series of buses, commuter rails, or *peseros,* lime-green Volkswagen vans that wind through the city. Residents of peripheral districts can transfer (7) — from bus to bus to *pesero* to Metro to bus, for instance — and can spend (1)

Priscila is one of those exurb commuters. She takes a bus about an hour and a half each way every day, from the city of Toluca, forty miles outside of Mexico City. Once she arrives in the city, she takes the Metro one stop to her teaching job. She tells me she’s usually one of only two or three women on her bus, and she applies her makeup in the last fifteen minutes of the ride: powder, mascara, a little bit of concealer.

Public transportation is particularly taxing for women: its tightly packed crowds are notorious for providing cover for surreptitious gropers and, across the city, street harassment is ubiquitous. A (2) found that 96 percent have experienced some type of sexual violence, including street harassment, in public, and 58 percent have been groped in public. To minimize these incidents on the Metro, (3) The first three cars of each train are now dedicated to women and children. And many of these women, between transferring from bus to train to Metro, take advantage of the time to color their lips and curl their lashes.

Since I moved to Mexico City two years ago, I’ve been enthralled by this impossibly delicate daily choreography. Board any train or bus during morning rush hour. You’ll come elbow to elbow with dozens of women under duress of sharp turns, unexpected careening stops, and the occasional shove in the ribs. Women lay falsies onto lash glue one-handed. Passengers board bleary-eyed and blotchy and disembark with a full face of contouring. They draw razor-sharp eyeliner wings with impossible symmetry. And they perform a Mexico City Metro staple: using a teaspoon as an eyelash curler, crimping lashes between the thumb and spoon edge and pressing upward.

Every weekday morning, Elisa, a housewife and office administrator, applies her makeup on the blue line of the Metro. Her twenty-minute commute gives her time for her standard routine: foundation, eyeshadow, eyebrows, mascara. For her, multitasking those twenty minutes allows her to juggle her household responsibilities. “Instead of those twenty minutes doing makeup at home,” she says, “I could be washing clothes.” Lexi is a tae kwon do instructor who almost always does her makeup while commuting — powder, eyelash curler, eyeliner, eyebrows. Her half-hour commute takes her from one end of the pink line to the other, and, like Marisol, she says she is always running late.

The artistry of these women, and their dedication to their beauty routines, has become an inside joke among users of public transportation. There’s even (4), with women caught unaware in all stages of their makeup regimen.

Beyond morning makeup routines, nearly all aspects of life in Mexico City are lived in motion. It’s never the same city twice. Chilangos, or Mexico City residents, are notorious for sheathing all manner of food groups, from tamales to chilaquiles in a bolillo bread roll to eat on the go. Naturally, their personal-care routines take the same form. Nearly any phenomena performed in the comfort of one’s home has its analogue on the street. I’ve bought makeup at tarp-roofed street stands and at weekend tianguis, from tabletops with rainbows of expired eyeshadow palettes: an orangey pressed-powder blush, liquid eyeliner that dries into a peelable strip of silicone, MAC-branded mascaras, or Kylie Lip Kits of ambiguous authenticity. My old apartment, on a major avenue near the center of the city, flanked a corridor of tarp-covered stands selling everything from hair extensions to fake Nikes. A solid block, two stands deep, was dedicated to street aestheticians. At rush hour, I’d emerge from the Metro into the chemical fumes of dozens of simultaneous open-air gel manicures, between a hundred and two hundred pesos a pop. You can get your hair cut, eyebrows waxed, calluses buffed, and nails polished without stepping inside four walls.

Saving beauty routines for public transport is a way to cope with the city’s breakneck pace. Who wouldn’t prefer to sleep five minutes more before an interminable commute? “We’re always in a hurry, the city is always full of traffic, and the transportation system is always really slow, and we spend a lot of time there,” Marisol says. Navigating the city as a woman can be fraught with intrusions, and applying makeup on the Metro is an act of resilience in a crush of millions.

*Madeleine Wattenbarger is a journalist based in Mexico City, where she writes about culture, politics, and human rights.*