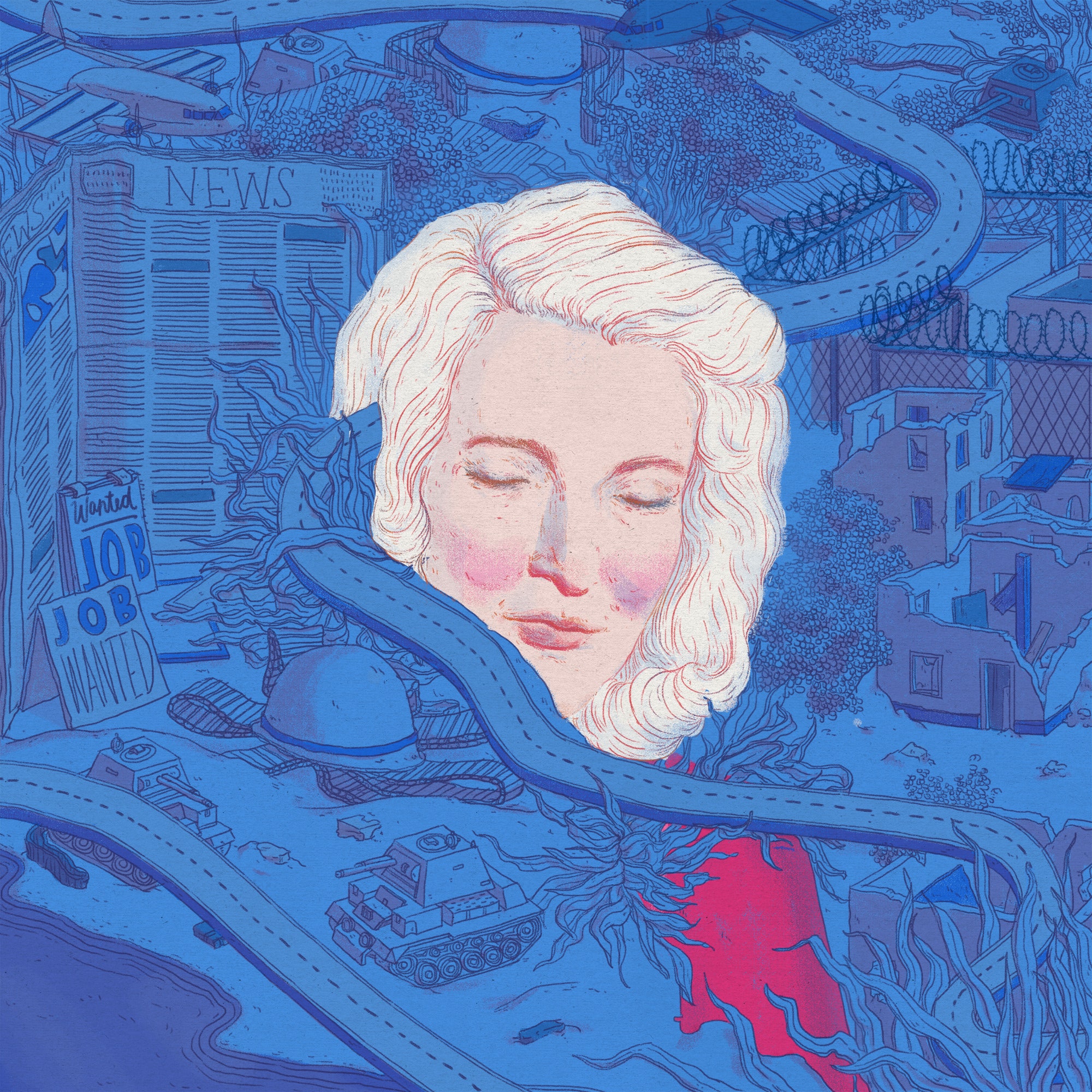 Martha Gellhorn was one of the first women ever to achieve an international reputation as a war correspondent, a tall order in what was then — and still is — predominantly a man’s world.* She came of age as the twentieth century did, reporting on virtually every major world conflict in her 60-year career, and Martha changed the face of journalism along the way.

She was born wanting to “go everywhere, and see everything,” and to write about it. In 1930, and just after her 21st birthday, she dropped out of Bryn Mawr for a job as a cub reporter for the *Times Union* in Albany. Martha covered women’s clubs, the police beat, and occasionally the morgue. The only female reporter on staff, she felt uneasy in the loud, boozy newsroom, and she often had to fend off the sexual advances of her editor. She stayed until the same lecherous editor told her to drop a story she deeply wanted to do. The piece was about a woman who’d unfairly lost custody of her children, because of a local judge who was punishing her for her life choices — working as a waitress, smoking, playing bridge. In that mother, Martha recognized an underdog who needed her voice. But she couldn’t use that voice, or her conscience. Not in Albany, anyway.

Martha wanted to be a serious writer and to be *taken* seriously, but the only articles she sold easily over the next few years were on fashion or the “woman’s angle” for American magazines she had little respect for. It wasn’t until she took a job with the Federal Relief Administration, documenting stories of the disintegrating towns and dispossessed families most beaten by the Depression, that her conscience, intelligence, and skill found a worthy target. She parlayed what she’d seen into a much-lauded book, *The Trouble I’ve Seen*, which made her the literary sensation of 1936.

Not long after, she met her literary hero, Ernest Hemingway, by chance in a Key West bar. When she learned he was traveling to Madrid soon to report on the Spanish Civil War, she was determined to go as well. She had no formal assignment, but a few months later, in the spring of 1937, she crossed over the border from France into Spain alone, carrying only a knapsack; a fraudulent letter stating her credentials, which she’d begged from an editor friend in New York; and $50 rolled and tucked into her boot.

Besieged Madrid was in its fifth month of bombardment. There, as the smell of explosives hung in the air, she began to write what she saw: of boys in pieces in makeshift hospitals and women in bread lines, of children walking to school through trails of blood and civilians living their lives bravely, even as their city fell to its knees. She wrote simply, and personally, convinced from the very beginning that if you cared about something enough, you could persuade others of its necessity. Enough with “all that objectivity shit.” She’d never believed it anyway.

The pieces *Collier’s Magazine* published from Martha’s time in Spain not only defined her voice and style but also radically changed how conflict was seen and reported. Instead of focusing on the usual subjects of war — tactics, generals, arsenals, artillery — Martha looked at the people, and she would continue to do so over the next several years, as nations tumbled toward World War II. She became Hemingway’s third wife and then his adversary, as he grew more and more frustrated by her ambition. The marriage reached its breaking point in 1944, when Hemingway, in retaliation for Martha’s choosing her work over him, offered his byline to *Collier’s* as senior correspondent for D-Day, effectively replacing her on the masthead.

It wasn’t just Hemingway thwarting Martha’s determination. Of the thousands of reporters around world covering the war, only 178 were women, and none of them had access to the front lines, because the military wouldn’t accredit women. Relying on her wits and her nerve, Martha stowed away on a hospital barge that happened to be the first to arrive at Omaha Beach. She went ashore as a stretcher bearer to help recover the wounded. She ended up scooping her husband, who never made it to shore at Normandy, as well as being the only woman on the scene.

Afterward, when she was arrested and stripped of all credentials, Martha ditched her passport and charmed her way into mobile regiments, tagging along in Jeeps and sleeping in fields. When she ran into trouble, she lied, cajoled, and talked fast, inventing boyfriends she had to see “one last time.” She was one of the first journalists on hand when American soldiers liberated Dachau in May of 1945. What she witnessed there broke something essential in her, she would later say, stealing her optimism and hope for mankind. But no matter how hard the world was to observe, Martha’s eyes stayed open.

When she reported on Vietnam in the 1960s, one photographer complained, “For Chrissake, here we go again … Why do women always have to look for orphanages?” She wanted to do a book on Vietnam that would mirror the structure of *The Trouble I’ve Seen*, but she couldn’t get a visa back into the country, possibly because she was “too emotional,” angry, and contentious. “This is how Women’s Lib was born,” she railed to a friend when she saw other journalists — all men, and most without her experience — gain access to Southeast Asia while she was relegated to the sidelines.

Martha never wanted to be seen as a mascot for feminism, only to do her work. Today’s women at the front, like Christiane Amanpour, Marie Colvin, Jacky Rowland, and Maggie O’Kane, feel similarly. In a *Vanity Fair* profile from 2012, Amanpour and her colleagues took pains to insist they be regarded “as *reporters*, not women reporters,” and of course all have the war stories to drive the point home. In Pakistan, Afghanistan, Kosovo, and Sarajevo, these reporters have shown they have heaping supplies of Martha’s courage and grace under fire. A good thing, too, since they face many of the same challenges she did — 70 years and counting after she paved the way — in what is still very much a man’s world.

Martha continued to write until her eyes failed and to take herself into places of war and conflict until her body gave out. In 1990, when she couldn’t get access otherwise, she smuggled herself into Panama, undercover, as the thriller reviewer for the *Daily Telegraph*. She had been snorkeling alone in Belize when the story broke that America had invaded in late 1989, and she asked an editor friend to pen a false letter saying she was there on official business as a special correspondent. It was the same kind of letter — exactly — that she’d begged a friend to give her 50 years before to get her over to Spain. Martha was 81 years old then, but you can bet she got her story.

**An earlier version of this article stated that Martha Gellhorn was the first woman to achieve recognition as a war correspondent.*

*Paula McLain is the* New York Times *best-selling author of* The Paris Wife *and* Circling the Sun. *Her new novel*, Love and Ruin, *is out now*.