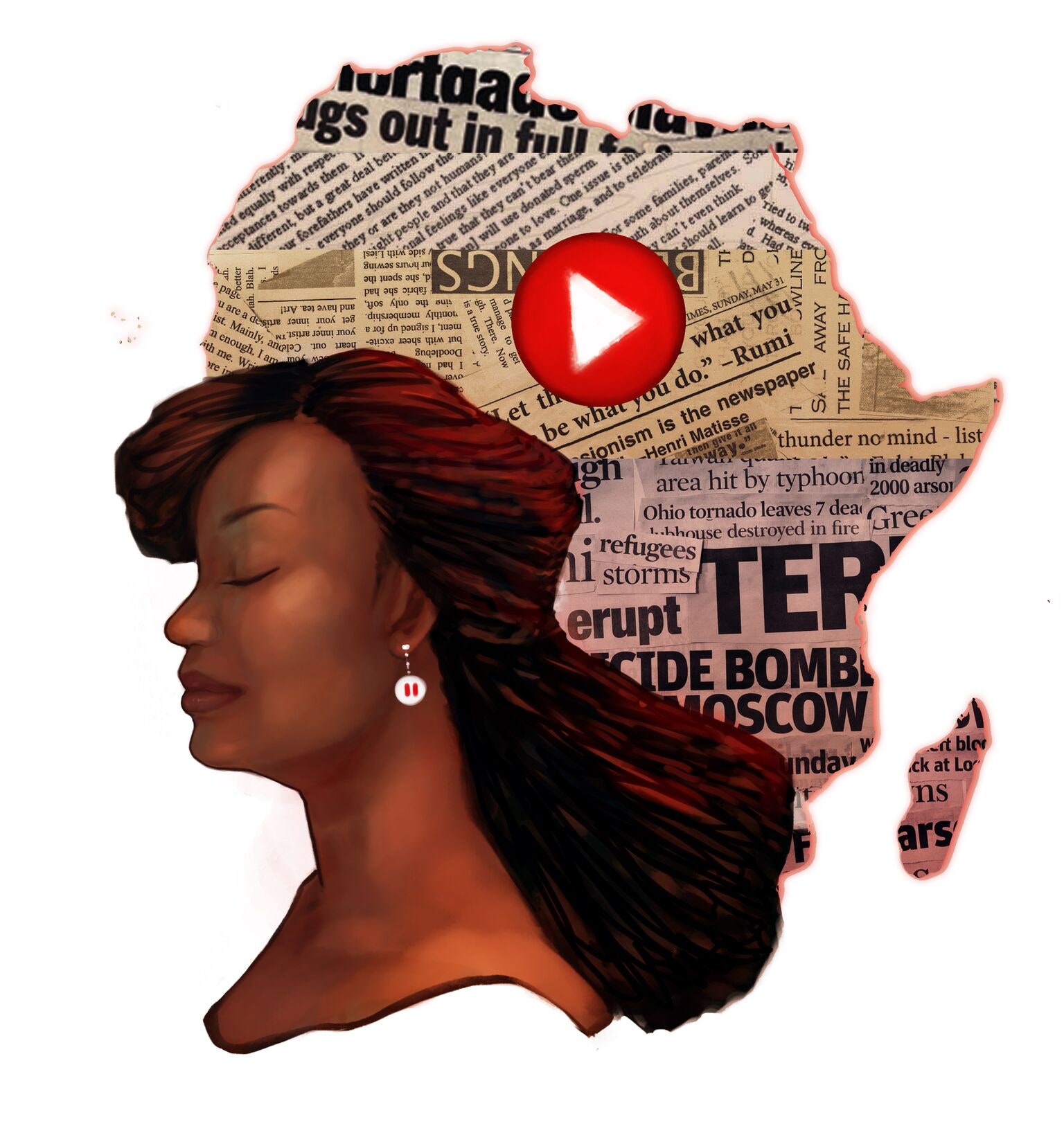 The (1) of *Keeping It Real with Adeola*, which has been described as the Nigerian version of *The Daily Show*, starts out as it usually does. The host, Adeola Fayehun, is onscreen, wearing a caftan in front of her typical graphics, reporting on African news. There had been a Boko Haram attack near the residence of the Nigerian president at the time, Goodluck Jonathan. His administration was powerless to stop Boko Haram and had serious corruption issues, plus Jonathan was a gaffe machine. He dismissed a missing $20 billion as (2) and a few months after stepping down after losing his reelection bid in 2015, Jonathan (6) (7) how tempting it was to not give up power.

In the episode, Fayehun is using what she calls her “villager persona” and talking about the attack rapidly and colloquially. Some of it will go over the viewer’s head if they aren’t Nigerian, but the sarcastic concern for Jonathan’s safety is clear. In rapid succession, she pretends to call a friend in Abuja (Nigeria’s capital) to beseech him to go check on the president, compares Jonathan’s outfit to hers, and speaks in such a shrill voice she works herself into a coughing fit, which she doesn’t edit out.

But just before the two-minute mark, she cuts to footage of herself on a street in New York, sticking a microphone in Jonathan’s face, repeatedly asking what he is doing about Boko Haram. This was about a week before the group abducted (8), but Boko Haram was already a huge concern in the country. When he gives a non-answer of “We are working very hard on that,” she doesn’t let him off, instead asking, “Yes, how exactly, sir?” It is courageous journalism.

Fayehun, a Nigerian woman working in New York, started the show in 2011 for SaharaTV, an independent African news organization. She was working as a producer at the organization when a host left and they needed a new show to fill the gap. I discovered the show in 2015 when I helped judge work by alumni at our shared alma mater, CUNY’s Graduate School of Journalism. When the judges got a glimpse of her show and found out that for the first 150 episodes, Fayehun researched, wrote, shot, and edited each one by herself, we gave her the “Best One Woman Show” award, a special category created just for her.

Fayehun said she agreed to do the show if she could do it her way — covering the stories she was interested in and doing so with humor and sarcasm. She says her show audience is largely the African diaspora, a group spread across the world that still want to hear stories from home. More important, working from New York allows Fayehun to expose stories that can’t always be covered from Africa. Every country in Africa besides Ghana has only a partly free or not-free-at-all press, according to  (3). Fayehun also makes sure *Keeping It Real*  is inclusive to viewers who might not be following the news closely every day, explaining the background and providing context to stories. It’s a perfect show for a Western millennial audience raised on Jon Stewart but wanting more African news.

So far, the tactic is working. Earlier this month, Fayehun put out her (4), and she recently got an editor to help with the show. And she needs the extra time — she and her husband have started a (5) providing school and hospital supplies to rural West Africa, paying hospital bills, and awarding scholarships for African students to study abroad. I talked to Fayehun recently about her biggest story, dealing with threats, being a woman in the media, and, of course, Goodluck Jonathan.

**Jackie Snow:** Why did you decide to take a comedic approach to covering the news?

**JS:** How do you decide how much humor versus straight reporting to do when you’re covering serious topics?

**AF:** It depends on the topic that I’m talking about. There’s a saying in my language that sometimes when something is too sad you just laugh. Sometimes when something is bigger than tears you just have to laugh about it. There was a time that the former president said, “Things are not as bad as we think. It’s just a matter of perception.” I remember using that in all kinds of jokes. I would say something on the show and be like, “Oh, wait a minute. That’s bad because of my perception. It’s probably not the reality.”

**JS:** Goodluck Jonathan is a constant topic for you. Even though he’s out of office, you are still covering him. He seems like he’s the perfect character for your show, where he’s a mix of news and entertainment in equal parts.

**AF:** Yeah, definitely. He’s still a good source of humorous material. Not just him, by the way, him and his wife, because his wife is even more dramatic than he is. She was always finding a way to see herself in the news. She was ridiculous. He’s not the only character, it was just very easy when he was there.

The new president, Buhari, has weaknesses too. He’s been saying some stuff that you’re like, “How dare you say something like this?” Like last week, he was in London, and while addressing the people, he talked about how Nigerians are criminals and the fact that everybody knows Nigerians are criminals. Which to some extent is true — we do have a reputation. But you don’t go and say something like that. He said Nigerians are brought up as criminals. I’m Nigerian, I’m working so hard, day and night. I was so mad. I went on Twitter and told Buhari to put me on speed dial; whenever he wants to speak to the public, he should call me.

**JS:** What are the stories that you’ve done that have gotten the biggest reaction?

**AF:** The thing I did that had the biggest reaction was when I was Mugabe] (9) ] (9). I didn’t expect it to have that kind of reaction like it did. It had about half a million views. A lot of people came after me for asking Mugabe to sit down.

**JS:** You caused quite a stir for that video clip of you asking Mugabe when he was going to retire. Was that such a big deal because the African media wouldn’t do that?

**AF:** A lot of people consider Mugabe as a hero, mainly because he has said a lot against white supremacy, more than most African presidents. So a lot of people think he is a hero, and they feel like he needs to be there to be the voice of reason. At the same time, most of the people don’t know the reality on the ground in Zimbabwe, where he has ruled for 35 years. So some people feel like I disrespected him by challenging him.

**JS:** It seems a lot of the show’s YouTube comments are about your outfits or your hair, and the first question in a recent Q&A you did was someone asking if you were married. Do you find these aspects of being a woman in media discouraging?

The other thing is, some Nigerian men, when they don’t like what you’re talking about, they call you a prostitute. I just laugh. But to be honest, I feel like a lot of people have gradually warmed up to me. I would get emails from people that you least expect and they talk about how much they enjoy the show. Some people would even write that they didn’t know that Yoruba women — I’m a (10) — can be that smart.

I always find that amusing because it tells me these people have been stereotyping, especially based on a tribe, where you’re from. I always think, *If only they knew how many women think like this, they would be shocked*. When they write good things today, fine. When they cuss me out tomorrow, fine. I’ve had a number of people that send me really, really nasty messages and cuss me out, and then after some months the same people will write me back and be like, *I’m sorry about what I wrote earlier*. I’m like, that’s fine. I don’t take anything personal. People change. They change their minds.

*Jackie Snow is a New York–based journalist escaping the cold in Singapore this winter.*