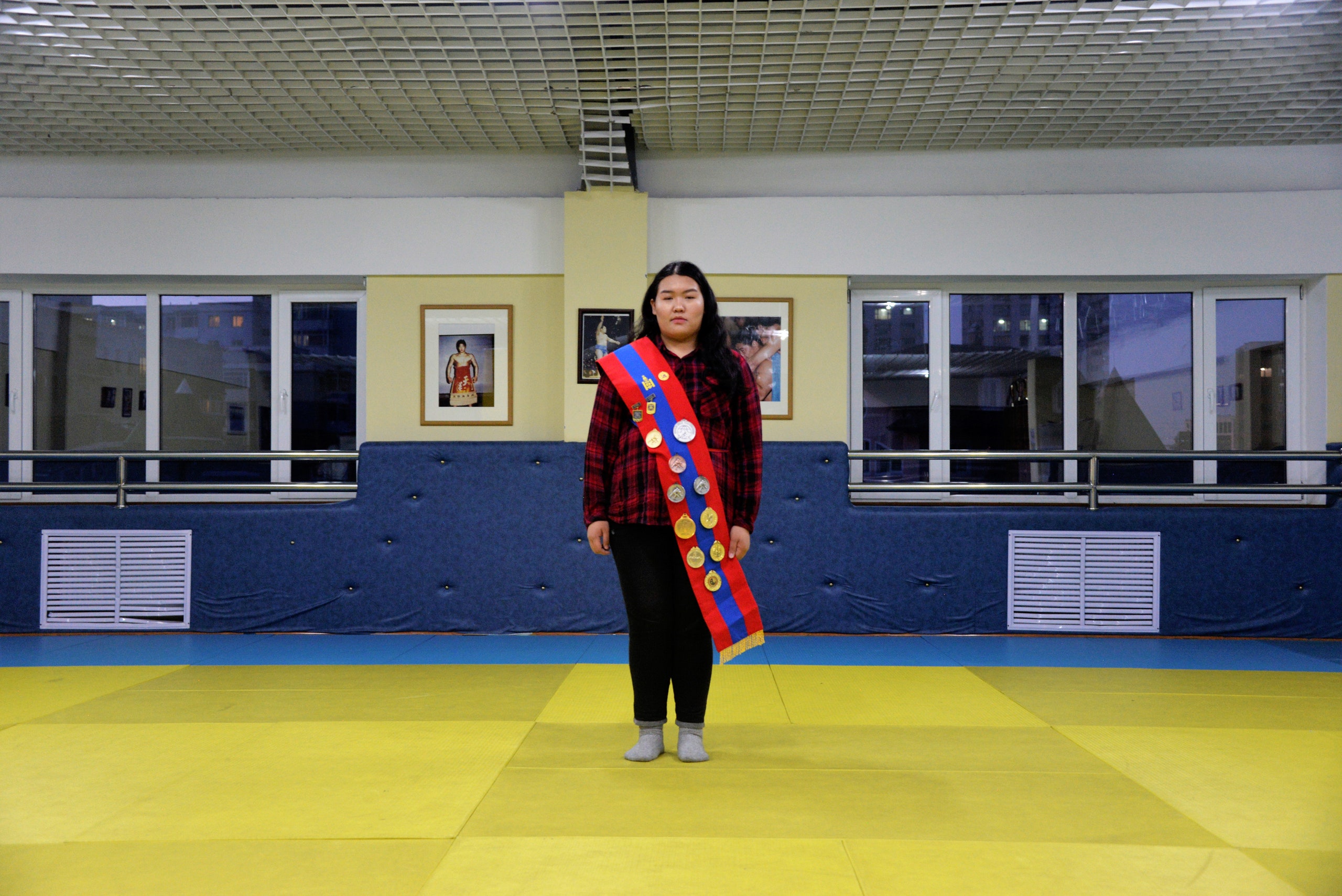 Tuvshinjargal’s chosen sport technically does not even allow women in the ring. Rooted in ancient Japanese tradition and dating back over 1,500 years, this branch of wrestling considers women “impure.” The sport is based on the sacred Shinto rituals performed for the gods. (1), women weren’t even allowed to watch sumo; it was believed that they would desecrate the Samurai ritual — especially if they touched the *dohyō*, the ring in which sumo bouts are held.

Women can now watch or practice sumo on an amateur level (and they prove to be some of the most avid fans worldwide), yet they cannot become professionals. Tuvshinjargal, who fell in love with the sport while watching Japanese wrestlers on television as a child, has always wanted it to be something more.

She began practicing sumo in 2015, and since then she has passionately worked toward her goal of excelling in the sport. Tuvshinjargal has already won several international championships, and she has quickly risen up in the amateur league; her coaches believe she has a rare talent for sumo. Despite all of this, Tuvshinjargal cannot expect to become a professional fighter because of her gender. Meanwhile, male sumo wrestlers can make millions a year in the sport.

We followed Tuvshinjargal throughout her daily practice in her hometown of Ulaanbaatar, Mongolia, and talked to her about why the sport’s male-centric traditions won’t stand in the way of her dreams of becoming a professional athlete.

After a day at her university as an international communications student, Tuvshinjargal enters her sumo gym. Her training day begins as the sun sets behind the snow-peaked green hills of Ulaanbaatar, the Mongolian capital city. For the next several hours, she’ll work on perfecting her fighting technique, as she has for the past two years.

Recognized as one of the best female sumo wrestlers in the world, Tuvshinjargal won many gold and silver medals in the Asian Games, World Sumo Championships, Mongolian Sumo Championship, and Japanese Women’s Open Competition. However, none of these awards will qualify her to practice professionally, as women’s sumo wrestling exists only as an amateur league.

In the past couple of decades, sumo has almost become Mongolia’s national sport. To wit: Since 2003, four of the five wrestlers who have become yokozuna (champions who have reached the sport’s highest ranking) (2).

Despite the popularity of the sport, Tuvshinjargal still receives puzzled reactions when she tells people she is a sumo wrestler.

“When I say I practice sumo, people get surprised and ask, ‘Is that a sport? Women can participate in that sport?’” she says. “They are surprised, because they don’t know. When I say I am an amateur sumo fighter, people usually go, ‘Wow, is that a thing?’”

It’s not uncommon for Tuvshinjargal to find herself as the only female in the ring when she is practicing. Hence, she often has practice matches with boys. “I just show them the girl power,” she says, laughing.

Despite her demanding schedule as a university student, Tuvshinjargal gets up at 6 a.m. every day to run. The Mongolian capital is (3); the temperatures can plummet to negative 40 degrees Fahrenheit in winter. She also does yoga before starting to fight in the ring. It helps her to have a clear mind, which she says is important for an athlete.

“I think of one thing before going up in the fighting ring: my goal,” she says. “When wrestling, it’s better not to think of anything. If I do, fear and anxiety come with my thoughts.”

“At first, fighting with boys was a little awkward, but it’s OK now,” Tuvshinjargal says. “During the sumo practice, there should not be such things as, *I am a woman: I have to be like this or that*,” she explains.

“When practicing sumo, gender does not matter,” Tuvshinjargal adds. “I have to focus and pay my full attention to my practice and my goal. That’s what I do.”

Despite all Tuvshinjargal’s efforts, it won’t be possible for her to become a professional sumo wrestler in the near future, but she doesn’t feel bitter about it. “I have a backup plan,” she says. “Anyone can achieve any success if they try, whether they are men or women.”

Her goal is to become an Olympic athlete. Sumo was her childhood dream, but Tuvshinjargal is not change-averse. Even if she cannot achieve her goal of representing Mongolia at the Olympics as a sumo fighter, she is willing to switch to another branch of wrestling. She knows that the skills she’s learned with sumo will be of value no matter where she takes them.

*Didem Tali is a freelance journalist based in Phnom Penh, Cambodia. Follow her at (3) and read her stories at (3)*.