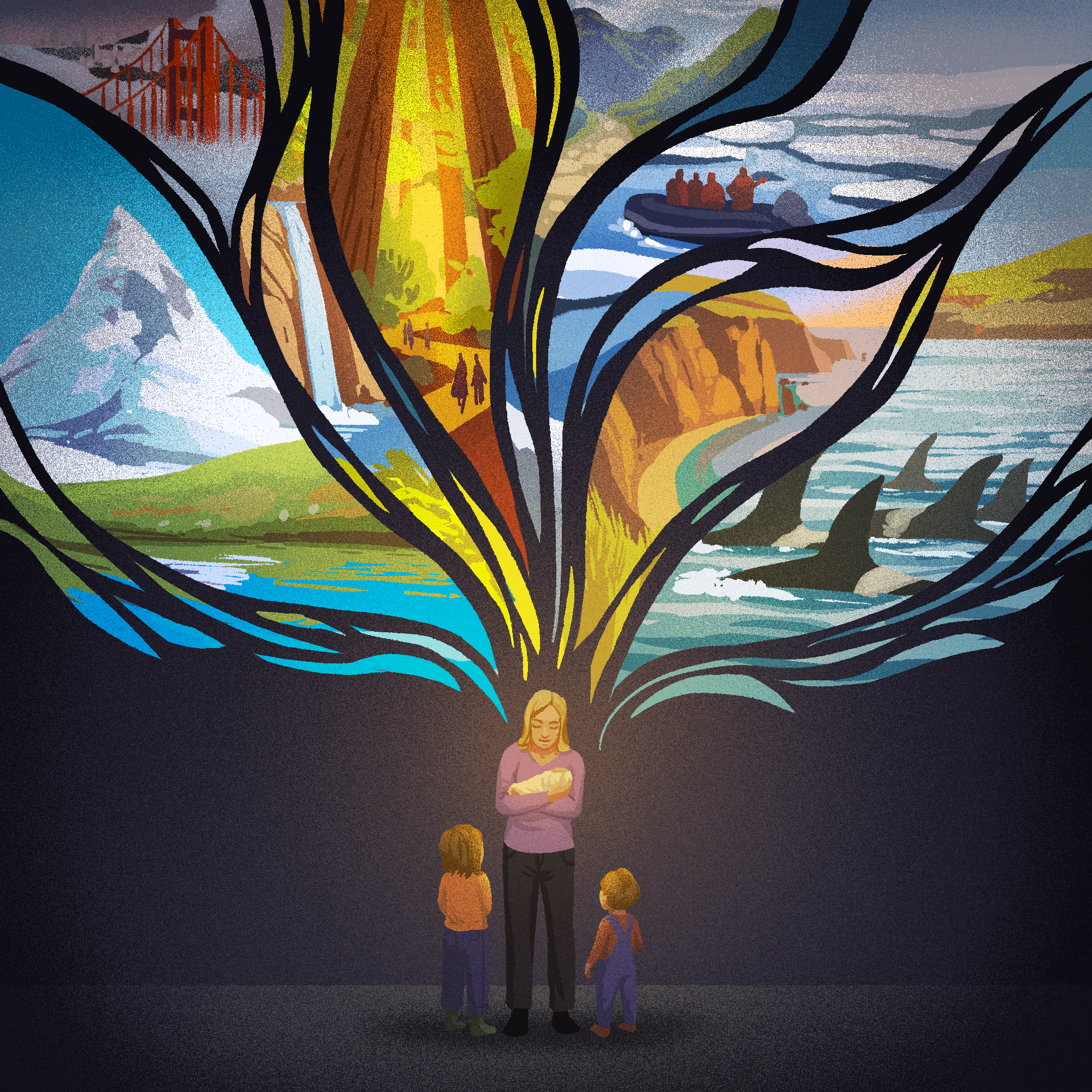 The hostel I’d booked in Casco Viejo in Panama City was hot, dark, and musty — central, as advertised, and cheap, as expected. In the tiny bathroom, Ben and I had to climb over the toilet to get to the shower. *Shower* was not an entirely accurate description, since there was no spigot, just a hole in the wall where the water dribbled out, and we had to press ourselves flat against the tiles to try to get wet. These were not tiles you wanted to press yourself against, so the darkness was a bonus.

I didn’t really mind the lack of showerhead, the creaking, rusty fan, or the lumpy bed. Who’d want to be stuck indoors when we could be exploring together outside in the sun? We bought salty empanadas in the alleys and cold bottles of Balboa beer. Ben and I toured the towering locks of the Panama Canal, dove murky shipwrecks off both coasts, and visited the empty, powder-white beaches and sweltering, tangled mangroves in the San Blas Islands.

One afternoon, we went for a walk around Casco Viejo’s crumbling colonial streets, and Ben spotted a row of white stucco arches in the sunshine: *Andean Grand Hotel* in gold lettering, with five stars. “Finally,” he said, grinning and charging up the steps without another word. But he returned moments later, with a crumpled expression. Turned out it wasn’t actually a hotel, but a film set for the next *James Bond*. This was 2008. I was used to traveling on a shoestring. Ben — not so much.

For more than a decade, I’d traveled and lived all over the world. I’d grown up in California, but after my PhD studying Australian sea lions, I taught marine ecology in the Bahamas and a course on killer whales in the San Juan Islands; I had worked as a science writer in Washington, DC, and as a marine mammal biologist on ships in Antarctica. I could and did go anywhere — the Inca Trail, Borneo, Tasmania, the Amazon — for as cheap and as long as possible. I loved the unexpectedness, the freedom.

I’d also fallen for boys all over the world. I loved their accents, the unknown. I’d dated Australians, New Zealanders, a South African, a Frenchman. My brother, a real homebody, kept asking, “Would it kill you, Shan, just once, to go for a Californian?”

I met Ben during my second season in Antarctica in 2007. He was from London and had quit his job at IBM to do a degree in polar studies before becoming an assistant expedition leader on the same ship I was working on. Ben was particularly British. He wore sweaters (“jumpers,” to him), drank tea, and said things like “*Toodle-oo*.” He was tall with hazel eyes and glasses, and he made me laugh.

We continued to travel — fellow adventurers — to Uruguay, Cuba, India, and Bhutan. We worked on ships in Arctic Canada and Greenland, eating frozen arctic char and muktuk, and cross-country-skied around scientific bases and remote campsites in the 24-hour sun on the Ross Ice Shelf in Antarctica.

At the end of 2009, we took a train from London to York for the wedding of one of Ben’s best friends from college. I was 35, and we’d been together almost two years. I’d always wanted kids and had just gone off the pill. Ben agreed but didn’t feel the pressure of the clock as I did. He was less enthusiastic, less certain.

Our first afternoon in York, Ben and I sat together in a Starbucks and drank lattes as it snowed within the ancient stone walls of the city. I loved him. I wanted us both to be happy. So we came up with a plan.

“I think I’d be OK not having kids, *if* we lived a life less ordinary,” I told him. “A life we couldn’t live with kids. I don’t want to do the rat race in London, buy a big house and fill it with stuff. We’d have to do things that were crazy. Sail around the world. Volunteer in Africa for a year.”

Mostly I was. More so because he looked so relieved. And we were going to *Africa*!

We spent the days of the rehearsal, wedding, and New Year’s in York discussing possibilities. I had teaching experience and hoped to use my skills as a scientist; Ben had always wanted to go to Madagascar. Or Kenya. Or Tanzania.

Meanwhile, I was strangely tired and struggled to stay up as late as he and his friends were. In-jokes from university and high heels on icy cobblestones didn’t help, but I worried everyone would think I was rude when I couldn’t keep my eyes open and headed back to our hotel early.

After New Year’s, we returned to our small terrace house in London, to find I’d been accepted to a writing residency in upstate New York for September. Unable to legally work in the UK, I’d started a memoir about a solo journey through Eastern Europe I’d taken years earlier. I was thrilled. But a tiny niggle bobbed to the surface — September was nine months away. Ben made a quick trip to the pharmacy, I peed on a stick, and Africa (and the residency) vanished.

So kids would be our next adventure after all. My last Arctic season, I was six months pregnant. We got married on a tiny uninhabited island off Spitsbergen. Three of us stood on the rocky snow-covered beach, wearing life jackets and waterproofs, with rifles slung over our shoulders in case of polar bears. The perfect shotgun wedding.

I’d never really missed California and my family enough to move back until I had my own children in London. Day after day, year after year, I nursed and fed and wiped and hugged and hardly slept. I wanted to go home.

I wanted my kids to grow up eating artichokes and avocados, *huevos rancheros* and s’mores, surrounded by sandy beaches and redwoods, the Sierra Nevadas and San Francisco, coyotes and banana slugs, barking sea lions and dive-bombing pelicans. I wanted them riding snowboards and skateboards and surfboards, breathing in the salt of the Pacific Ocean.

And I wanted my parents around the corner, to drop off the kids so they could play tickle-monster with my dad, go swimming in backyard pools with my nephews, bake cookies with my mum — peanut butter with orange zest and crisscross fork-marks — just as I had when I was little.

But Ben’s job, family, and friends were all in the UK. He found California slow; he thought Santa Cruz was weird. He continued to work summers in the Arctic, and the kids and I spent those weeks in California without him.

Ben wasn’t interested in traveling with children either. He said we could all hike the Annapurna Circuit in Nepal once the youngest was eight — maybe eleven. He didn’t see the point in going somewhere if we had to navigate naps, high chairs, and meltdowns. But I was going stir crazy changing diapers all day in dark, gray London. Europe was on our doorstep. The world could still be explored with the kids in tow. Occasionally, I was able to talk Ben into it — renting a *gîte* with a bouncy castle in Normandy and taking all three trick-or-treating in the Channel Islands. But more often, his idea of a holiday was time alone to work on the house. So I took the children to visit friends in Sweden and the Netherlands on my own, and my mum joined the kids and me on trips to Norway, Barbados, and the Canary Islands.

One night, Ben left. Our oldest was five, the middle had just turned three, and the baby was ten months. It was a shock to me, though we’d both been unhappy for a long time. We were too different as parents, too different from who we’d been. After being together almost nine years, I no longer recognized him.

At first, I felt the freedom I expected as a single mum. The house felt bigger, lighter. It was a relief not to have Ben come back pissed off at me and the kids for making his long days even longer. My mum and I booked holidays with the children to Brooklyn and Bath. I took the baby on a girls’ road trip with a neighbor and her daughter through Latvia and Lithuania. After my oldest finished the school year, I thought we might finally move to California.

Then I slowly began to understand how few choices I have over my own life. I can’t move back to Santa Cruz; Ben would never allow it, and I wouldn’t take the kids so far from their dad. I can’t keep the house without his cooperation, so I thought we might move to Bristol. The boys need a bigger yard; we’d get away from the capital’s high prices, pollution, and pace. I would have better job prospects. But to move anywhere from the immediate area, I need Ben’s permission. I can’t afford to stay in London, and I’m not allowed to leave.

I always used travel to find my place in the world. It wasn’t all freewheeling — my trip through Eastern Europe years ago helped me regain my footing after the sudden death of my fiancé at 25. But now I need Ben’s agreement on school holidays and his consent to take the kids out of the UK, even for a weekend. We’ve been separated almost two years, and it’s become increasingly contentious. I dream of packing up the kids and setting off — spending a year speaking Spanish, swimming through waterfalls, eating *asado* together somewhere in South America. I dream my kids could have the life less ordinary.

But we can’t — I can’t. Not for sixteen years, when my youngest turns eighteen.

My parents may no longer be around by the time I can finally move home. My dad is going through a health scare, and I’m trapped, helpless, and isolated. From London, I watch the out-of-control California fires and mudslides on the news. When my family rallies together on the other side of the world, I feel like a stranger in a foreign land.

Ben says I knew what I was signing up for when I first moved to the UK all those years ago, in love with the world at my feet. And I knew things would change with children. But I had no idea that our life together would turn out to be only empty promises, like the façade of a *James Bond* film set, or that I’d have less autonomy as a single mum than as a married one.

Of course, I’d trade all my globe-trotting freedoms for three sloppy kisses. There are worse places to be stuck than London, and I’m aware of the privilege of having food on the table and national health care. I’m focusing on everything this city has to offer — public transport, history, theater, museums. I’ll fight to continue to spend our summers in California. And in 2033, I’m taking my kids to the moon and back.

*Shannon Leone Fowler’s debut memoir,* (1), *is out in paperback from Simon & Schuster.*