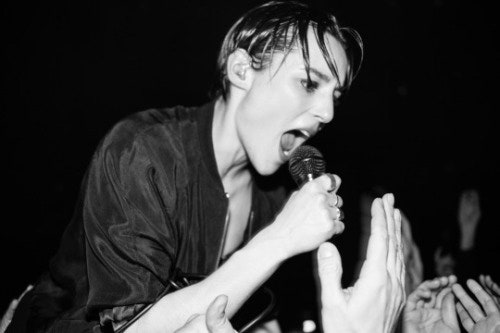 Last year I experienced a heartbreak so abrupt and painful it made every day after our breakup feel like a nightmare that I couldn’t wake up from. I wept like Marianne Dashwood, vowing to never love again. I spent my nights listening to Skeeter Davis’s “End of the World” on vinyl while lying in bed during the day, sobbing for hours. During what I now refer to as my “time of mourning,” I resigned myself to perpetual sadness. I forced myself to believe that love wasn’t real, and as soon as I did, my friends and family proved me wrong with all the phone calls, hugs, and late-night texts that they sent when I felt most alone. Their acts of love and empathy supported me and helped me heal. It’s so unoriginal to say it, but in so many ways it saved me.

For Jehnny Beth, the front woman of Savages, love is always the answer. *Adore Life* , the band’s follow-up to their 2013 debut, *Silence Yourself* , is composed of distinguishably raw emotions and full-throttle riffs. It all serves as the perfect backdrop to previously uncharted thematic territory for the band: love. At first, Jehnny considered it to be trite, viewing love as something that people only wrote about because it was easy to talk about and relate to. But then came songs like “I Need Something New” and “Surrender,” and in the end, the very thing that Jehnny resisted in her songwriting became the central focus of her creative and personal life. I talked to Jehnny about her approach to lyrics, how she learned that love can be courageous rather than vulgar, and how performing informs the band’s songwriting.

**Dianca Potts:** *Adore Life* is your sophomore release. How did the experience of creating this album compare to working on your debut?

**Jehnny Beth:** It’s a continuation, things that you learn along the way lead to where you are once you start writing a new record. Each record has its own history and its own context, things that happen to each member individually, and then where we are as a band. I think that *Silence Yourself* was very much so a photograph of who we were at the time. It was done quickly, recorded live, with the energy of the night in mind. We pretty much wanted to just lay down things and not think much more about it. For this one we took some time to write, and when that was done we felt like we were missing adrenaline, which is a very important ingredient in our music. We went to New York to perform and finish writing the songs. There was more trust and confidence between everyone, and we gave each other some time alone to work on ideas that each of us wanted to explore. In the end, *Adore Life* has more nuances in the songwriting because of it.

**DP:** While listening to your album, the theme of love, or at least a desire to experience and understand love, felt very present throughout, especially in tracks like “I Need Something New” and “Surrender.” How did this LP reshape your definition of love?

**JB:** There were a lot of lyrics that I had written since *Silence Yourself* that were about love, and I didn’t know if they were appropriate for Savages. When we started writing together, it was the question “Can I use these lyrics? Can we talk about love?” I think that personally, I learned that love is the answer, literally. I think there were moments in my life where a sentence like that wouldn’t have resonated with me. I thought it was just a clichéd thing to say, that people would talk about love because it was an easy subject to talk about, but I realized that talking about love could be really deep and was something that touched me more profoundly than I thought it would. It was the answer for me: in my relationships, in my private life, in my work, in everything. I thought that love was vulgar, superficial, which it can be, but then I saw another face of it.

What I’ve found about love is that love is a courageous thing. You need a lot of balls to say “I love you” to someone. I realized that it was vulnerability that makes you strong and that life isn’t being lived fully without love. All of this was sort of a self-realization, and it was very hard to take at first because I had so many defenses. I think that we all do, but the actual concept of loving no matter what is very hard. It’s one of the hardest, and so my vision and the way that I integrated that concept into my life and this record.

**DP:** I related a lot to the way you reflect on the dichotomy between right and wrong in “Evil.” Did your experience of growing up in a religious family inform this track in any way?

**JB:** My parents weren’t religious, but my family was, and I think that even if people aren’t practicing religion there are parts of religion that remain. My parents were raised by Catholic people and it was part of their education. I grew up with a very big sense of guilt that was due to my attraction to both sexes, which was something that I didn’t realize very early on, but it created a great sense of guilt. I grew up with the sense that you could do anything and be anything as long as you get out of *that* .

In most people’s minds there’s only one way to raise a family, and it’s starting to change, but where I grew up, they’re really open, generous people, but there are things where you feel a resistance. When you grow up with a sense of guilt about desire, you survive, and that’s really important. It doesn’t matter what happens as long as you can understand it and learn from it and survive.

**DP:** The songs on *Adore Life* really investigate the big life questions that so many of us mull over. Has your connection to those questions changed since the album’s release in January?

**JB:** Well, isn’t it human to question life? Sometimes I think that the answer is in the question. It’s funny, because has become everybody’s song when we sing it live; singing this song every night, there’s always someone who starts crying or shouting, there’s always a reaction that is very human and very natural and beautiful, and this song still brings tears to my eyes when we sing it for various reasons.

It became a catalyst, a receptacle for emotions, and things keep going into it. It’s not our song anymore and I quite love that, so perhaps this song is supposed to travel from person to person in the universe and be a kind of tool. The stories that I hear from people about how this album and the songs from *Adore Life* have entered their life and how they carry a certain meaning for them are so rewarding. It’s all very humbling and extremely rewarding more than anything. The luxury and the luck to play the music that you want to play without compromise, the ability to do that and live from that is forever a dream and something I feel like I’m going to wake up from.

*Dianca Potts is an assistant at Lenny.*