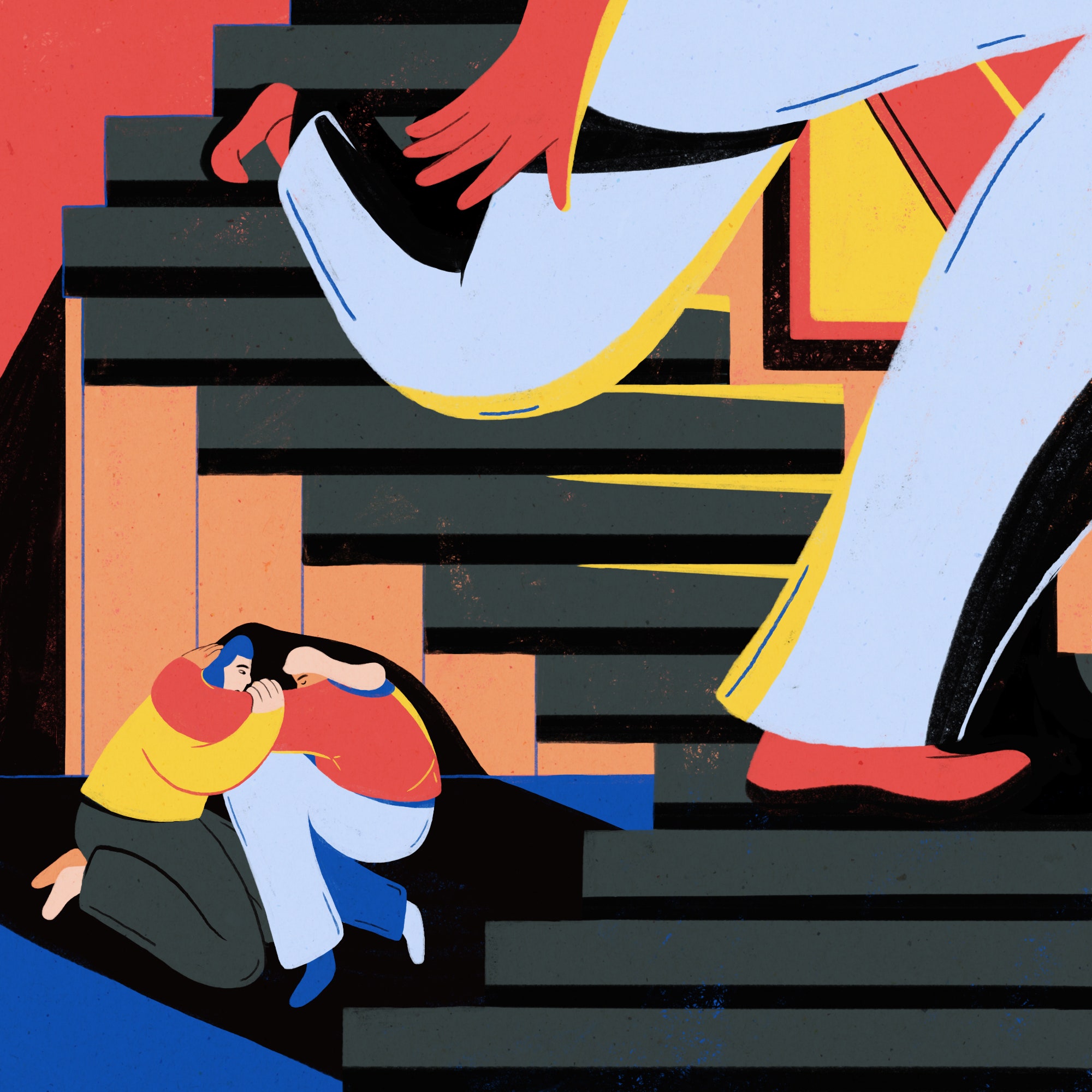 When my older brother died last year, I never cried. As my siblings and I tried sharing some positive memories about him, all I could come up with was that he had played a mean game of Ping-Pong.

When we were growing up, our parents lived by the old proverb “Children should be seen but not heard.” However, in our house, I’m not sure how much they even saw the six of us. Did they not notice the red flag that my brother waved in their faces when, at only seven years old, he threw that large metal trash can onto the head of our then-five-year-old sister?

When I was seven, I dreaded him; the way he’d straddle my tiny body, then drool close to my face. I can still see his spittle snakes slithering closer and closer until they nearly bit my nose. Then, when I was around eight or nine, he started beating me up. He hurt our older sister, too. If we heard him coming, sometimes we would hide together behind Mom’s garment bags of sequined gowns, afraid to breathe, in that walk-in cedar closet that reeked so strongly of mothballs that our eyes would water.

The specifics of the assaults remain a blur, as if covered with layers of gauze. But I do remember they would happen at night, when our parents were out. Either he would pull me down the stairs to our basement or I’d already be there, practicing Mozart Made Easy on our upright piano. I see his red, acned face, the tiny slits of his eyes. There is his large sweaty hand locking both of mine behind my back, while his other one slugs me in the stomach over and over again. There’s the burning of his fists through my body, the losing of breath, the cold of the black-speckled floor tiles against my skin.

When our parents finally returned, I’d tell them, but they wouldn’t side with me, no matter how forceful or urgent the telling.

“He’s lying. He almost killed me!”

Then Mom and Dad would glance at each other. As he turned his back and walked into his office to refill his pipe, Dad would bark, “Both of you go to your rooms and stay there. I don’t want to hear another word.” And, as was the custom in our house, that would be the end of words.

As far as I knew, there were never any repercussions for him. My parents never exactly accused me of lying; they just dismissed it as “normal sibling rivalry” or “Boys will be boys.” I was also the girl with the too-big feelings, the only emotional creature in our otherwise mostly stoic family. “She must be overdramatizing it,” they could have muttered to each other.

I can’t say exactly how many times this occurred. But apparently, I said *as hard as he could* so often during that period that our parents’ only course of action was to ban the phrase from our family’s vernacular. If I ever uttered that sentence again, I’d be grounded. Maybe they just thought if I couldn’t say it, then they couldn’t hear it, then it didn’t happen.

But the violence Ted inflicted on me still lives in me. His abuse remains visceral. It’s become as much a part of who I am as my name. I find that I’m still hypersensitive to people touching me too hard. Even if just in play, if I’m tickled or poked too roughly by my children, that old feeling of helplessness is reignited. If I had ever confronted Ted about it, he might have said, “What’s the big deal? We were kids. Let it go!” The beatings stopped when I was about eleven and my brother was fourteen. I’m not sure why. Maybe because I grew taller than him around that time. Perhaps my newly sprouted body scared him. It’s harder to break a tree than a twig.

But there have been lasting consequences. Whenever I see a man being emotionally or physically abusive to a woman, I feel the urge to intervene — and I have, sometimes unwisely. His abuse has also fueled my activism, leading me to become a board member of Equality Now, an international organization that fights the global epidemic of sex slavery and violence against women, to speak at marches for women’s rights, and to become involved in such organizations as the Equal Rights Amendment Coalition.

If I see men not listening to women or talking over them, my blood begins to boil. Even today, it’s still hard for me to trust that I’m really being heard. I find myself sometimes exaggerating things because I subconsciously fear I won’t be believed just telling simple truths.

Things really started to unravel for my brother after he started pre-med classes in college. Because he was Ted Lahti Jr., the firstborn son, my dad expected that he’d follow in his footsteps and become a doctor. But Ted never wanted that. What he really strove for was Dad’s approval. For him, that became an unachievable lifelong obsession. I shared that goal with him, but the bar was not as high for me because I was a girl. The pressure for Ted to succeed must have felt viselike.

After having a nervous breakdown, Ted dropped out of med school. With Dad’s financial help, he proceeded to get into real estate, and within a few years he’d made millions of dollars. Just two years later, after making many ill-advised real-estate deals, Ted lost everything, including the $100,000 that Dad had invested — much of my parents’ retirement money. That loss put an irrevocable strain on their relationship. Ted threatened to sue our father; he even pulled one of Dad’s guns on him while Mom, cowering in the corner, pleaded for him to put it down.

Out of desperation, Ted started writing bad checks. He got caught and called me collect to tell me that unless I paid them off for him, he’d have to go to prison for two years. I wired him the money that day.

Then, in his mid-30s, Ted went through debilitating depressions and heavily self-medicated with alcohol and drugs. While drunk-driving one night, he rolled his truck in a Michigan cornfield. It landed on top of him and several of his organs fell out of his bloated belly. He spent a week in the ICU. He survived but was left with a scar that slung across his torso like an angry purple banner.

Soon after that, I came face-to-face with his delusions and mania for the first time in my adult life. There was that visit to New York City, when he swore he had an appointment with Walter Cronkite. He didn’t. There were those notebooks overflowing with drawings and plans for soundstages he proposed we build in Hawaii. He claimed he could find investors for our mini movie studio. He couldn’t.

We all begged him to see a psychiatrist. He’d insist that nothing was wrong. Finally, after years of pleading, he agreed, but reported back that the doctor had diagnosed him as “only” having “borderline personality disorder.” None of us knew what that meant. I remember feeling relieved. Well, at least he’s only borderline!

He’d found his defense. “See? Like I’ve been telling you! Nothing to worry about!” Ted insisted that it was meaningless and that no therapy, treatment, or medication had ever been recommended. His well-honed gift of denial kept him from seeking professional help. He adamantly refused to find employment, except for the occasional house-painting gig. ”I’m not the type who can work for anyone,” he’d declare.

At that point, I didn’t fear him anymore. Instead, I just felt responsible for him. Except for the checks I’d send him, our communication devolved into only his steady stream of emails, which detailed his current conspiracy theories and the latest, definitive dates of the end of the world. He warned us over and over again that we should buy gold coins, purchase guns, get out of urban areas, and find underground shelters. I finally begged him to stop. I’d had my fill of the apocalypse.

The last time I saw him, I had invited him to stay with us for Thanksgiving out of a sense of familial obligation. He arrived with his thinning hair greasy from not having showered, wearing smelly clothes, and with holes in his shoes. Instead of a suitcase, he carried a wrinkled trash bag. He’d told us he’d been diagnosed with thyroid cancer and that it had spread into his back. We couldn’t tell if that, too, was yet another lie. Barely saying a word, he spent the entire three days laying on the couch, drinking Coors, reading trashy magazines, and watching soap operas.

He’d periodically write to me, calling me his “angel,” his “only friend.” But by that point I wasn’t his angel or his friend. “Chrissy, thanks for being the only one who cares. Love, Teddy.” I knew he just needed more money. At nearly 70 years old, he remained a child, always knowing there’d be someone to bail him out. Even at the very end, I felt obliged to support him, to keep him from having to live in his car as the cancer — which turned out to be very real — ate away what was left of his bones.

In one of his last letters, he wrote, “I don’t know how my life ended this way. I feel like I was a good person.” I know he had goodness. But mostly I remember him as a person crippled by mental illness who couldn’t or wouldn’t be rescued. He died alone, in a rented one-bedroom condo with a busted coffee table and a stained mattress. His only possession was Dad’s old beat-up Mercury, filled with cans of tuna and green beans, cases of water, and a gun. A survivalist who couldn’t survive. A scam artist who got away with nothing. A con man who, in the end, tried but failed to con his sister out of caring.

*This essay has been adapted from* (2), *copyright 2018, by Christine Lahti. To be published on April 3, 2018, by Harper Wave, an imprint of HarperCollins Publishers. Reprinted by permission*.

*Christine Lahti is an Oscar, Golden Globe, and Emmy -winning actress and director*.

***On April 9 at 7 p.m., Christine Lahti will be in conversation with Gloria Steinem at St. Francis College in Brooklyn (presented by Books Are Magic). (1).