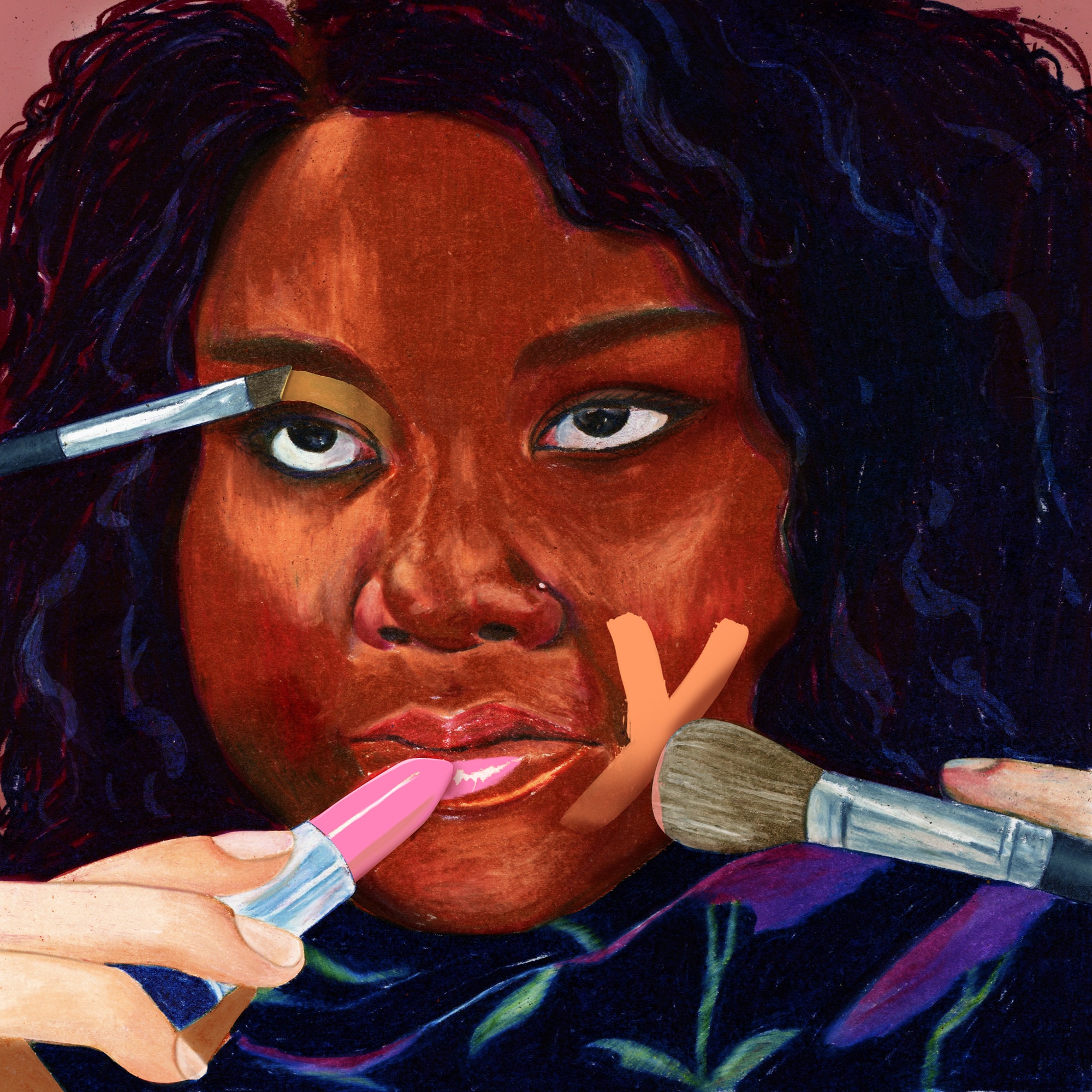 Things I’ve looked like after getting my makeup done by “professional makeup artists”:

Lemme explain. Although I am a fat actress and I dread costume fittings, the most stressful thing about being on set is having my makeup done. I’m very used to not having clothing fit and/or the wardrobe department not even *having* clothing in my size (which is a shitty thing to get used to). I could write for days about how fucked costuming and wardrobe is for fat women. But that’s not what this is about. This is about how makeup artists on set FUCK UP my beautiful black face.

I remember my first job where I was getting paid in more than thank-yous and snacks. It was a truly wild ice-cream commercial shot in Romania (1)”). I remember getting my makeup done and looking in the mirror and having to resist clutching my pearls and screaming. The woman had somehow covered my face in a grayish-brown color and given me bright-blue eye shadow that looked as if it she were trying to bring the sky inside and put it on my face. In short, I looked truly insane.

When we showed the director, he was confused as to why I didn’t look like I did on my audition tape. I then had to walk the sweet makeup artists through how I do my makeup, using my own products that I had brought with me (thank God I had them). On the shoot days, I did the base, and she would do the extras … glitter, blush, and lashes. At this job, I didn’t mind that the artist was working with an incomplete kit, because (A) It was my first job, and (B) I saw one black person in Romania, and he was at the airport, leaving. So I get why there was a lack of knowledge. But I was very naïve, because I quickly learned that this is basically the standard in America, too.

Things that have happened to me with American “makeup artists”:

1. Had a shade of pink put on my lips that made my face lips look like pussy lips.
2. Watched one artist mix six different shades of beige foundation for a full ten minutes. I assume she was praying that they would somehow get darker (I finally offered her my personal makeup, which she accepted).
3. Realized when I got home after working that my neck didn’t match my face even a little bit.
4. Was dusted with translucent powder and nothing else because I had “good skin.”*

*I knew this was a lie because I have lots of acne scarring, and I never saw a color darker than tan on this artist’s workstation.

I haven’t worked that much … but if you’re curious about my résumé, I was on a show on MTV called Girl Code. I had my own show you never saw because it was so poorly promoted called *Loosely Exactly Nicole* — RIP (I’m still salty). And I perform all over the country … mostly in LA. I’ve totally worked enough that it’s mind-boggling that I’ve met only a small handful of makeup artists who had a full working understanding of how to do black makeup, and surprise fucking surprise, they were mostly people of color.

Not to make it about privilege, but having makeup for your own skin color IS A PRIVILEGE. Now if you’re a nice white actor friend and you’re reading this and you disagree, just imagine having to bring your own makeup to set for every job you book. Waking up at 4 a.m. so you can do your own makeup before you get to set for a 6 a.m. call time so you don’t insult the makeup artist by doing your makeup yourself in their allotted time. Spending countless hours on YouTube watching makeup tutorials. Not for fun (sometimes for fun) but to keep up with the ever-changing makeup trends, so you don’t make yourself look dated. Plus, you have to learn different looks for different kinds of scenes. Is it a “no makeup look” or is it a “party look”? Now, my nice white actor friend, imagine you go to work not having done any of the above, and there’s an all-black makeup and hair department. Not one of them knows how to do your makeup. They also have only one shade marked “pale,” and they don’t feel bad about it, because you’re an “other” and it doesn’t matter.

> Not to make it about privilege, but having makeup for your own skin
> color IS A PRIVILEGE.

For my white non-actor friends reading this, it is a privilege to go to ANY makeup counter and/or drugstore you want and be able to find your shade. Over the years, it has gotten better for people of color, but it’s not enough. It’s incredible that EVERY SINGLE makeup line on the market has a million shades for white people, from ivory to light sand and everything in between, whereas some lines have one or two or ZERO shades for people of color. It’s fucking gross and rude. It’s also just something I’ve become used to.

But it’s not all bad. Some makeup brands are better than others. This may sound like a commercial for them, but I love MAC Cosmetics. I love the quality, but that aside, I like that they have my shade and also darker shades of makeup. Female, male, and trans friends of all shades work there, representing all the colors they sell. That, to me, is beautiful. I realize that other companies do it, too, but MAC stands out to me. Sephora is also a great resource — its branded line goes pretty dark. Also, don’t sleep on Fashion Fair. If I remember correctly, they start at a deep olive and have like 15 shades that go to like super-dark onyx. Also, just this year, Dior launched darker shades. Black Radiance and Black Opal also are decent drugstore brands that cater to people of color (but I’ve only seen them in Harlem or other heavily black areas, which is kinda shitty).

So it has truly gotten better since I was fourteen and trying to cake on drugstore brand shades like butterscotch and almond brittle. However, I’m saying that larger color selections need to appear at all price points, and it would be great if every makeup company had a range that was more inclusive.

I mention makeup lines that don’t offer makeup in darker shades because a lot of makeup artists start their careers at makeup counters. If they don’t have the tools, how can they learn? That being said, I’ve taken audition classes and acting classes, so I expect the same from makeup artists. Take a seminar or a class and educate yourself in order to do your job at full capacity!

I live in a world where if I see a family show, or a show where siblings are the lead characters, I almost always move on and don’t worry about auditioning for it, because unfortunately white in our society is the norm. So inclusion or a blended family isn’t even a thought unless the show or movie is about that topic. I’ve been on many sets where I’ve been the only person of color, and it sucks. So when I actually book a job, and get to set, and it’s the rare occasion when I give the makeup artist a chance to do my face, and they fail me, it’s just another reminder that I’m different. Not that I don’t want to be different, because I love what makes me different. I love my dark skin, and even though I wear wigs and weaves, I love my naturally kinky hair that barely ever does what I want it to do. I love my fat ‘lil body. I love me inside and out and when I get to work I would love to have my differences embraced.

P.S.: I also do my own hair, because I have natural hair/wear hairpieces, and no one knows how to work with those either. And don’t get me started on how a lot of lighting people don’t know how to light me.

*Nicole Byer is an actress and comedian living and performing in LA. You can see her live: follow her Instagram and Twitter for live show updates — @NicoleByer on both.*