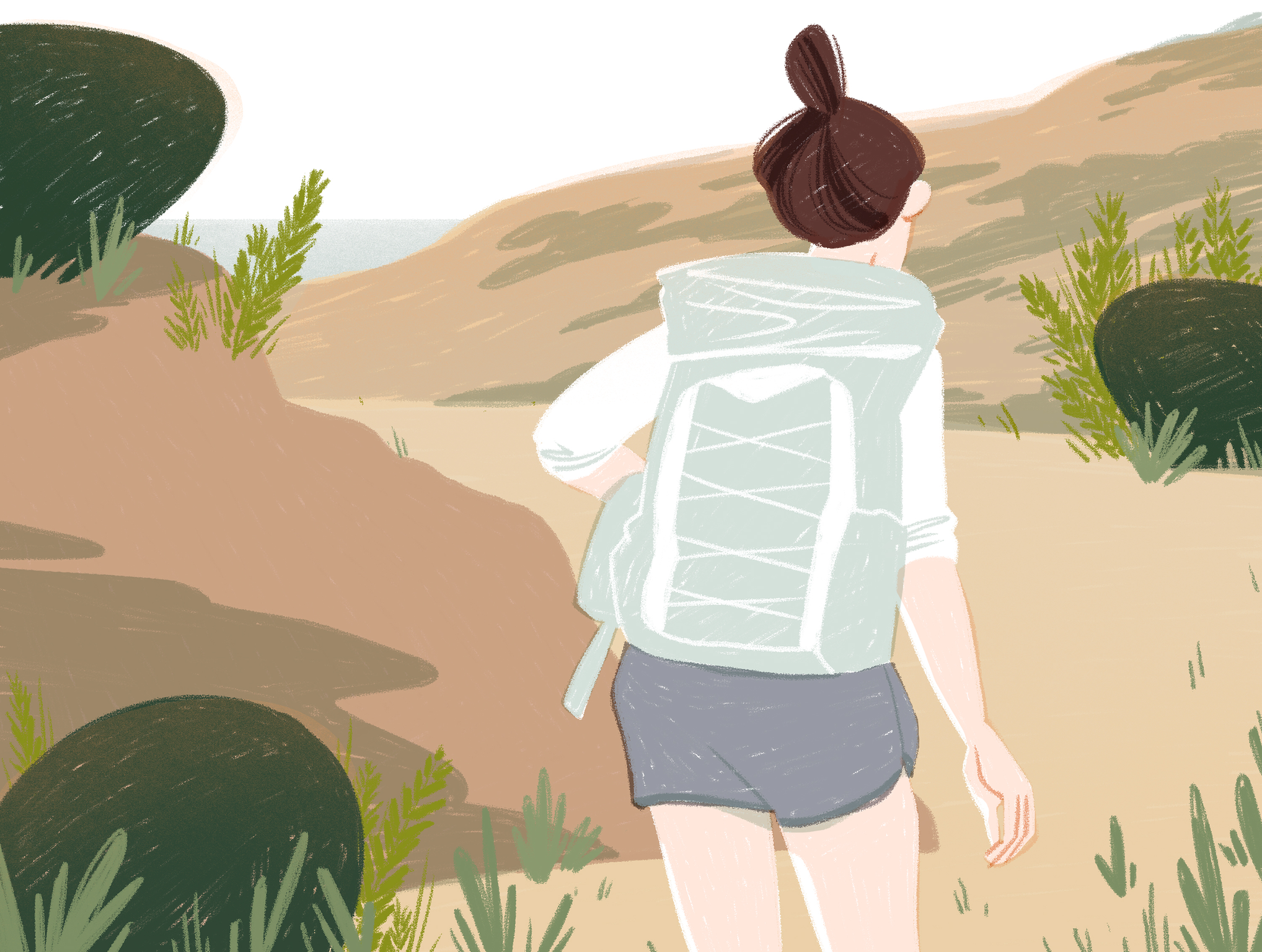 *”The one for whom behind every hot pair of boots or sexy little skirt or flourish of the hair there was a trapdoor that led to the least true version of me. Now there was only one version. On the PCT I had no choice but to inhabit it entirely, to show my grubby face to the whole wide world.”* —Cheryl Strayed, *__WILD__*

Los Angeles is a city that thrives on illusion. Palm trees and sunshine mask blankets of smog and pollution. Botox masks laugh lines and emotion. Money and power often mask loveless marriages and eating disorders. Hollywood is dedicated to the cultivation of inauthenticity. As an actress, I go to work every day and *pretend* to be someone I’m not.

Don’t get me wrong, I love what I do. I love to play and explore. I love to search for the most truthful and vulnerable ways to make pratfalling into a dumpster (without exposing my nethers) seem natural in five-inch Louboutins. I love exploring a new character, finding her emotional intricacies and innermost desires (and discovering some of my own in the process). But after 11 years of living in LA, I also realized I was feeling lost. Like most 30-year-olds just after their (1) (identifying this as my Saturn return was also *directly* derived from my more than a decade in LA), I needed to discover who I was again.

In high school, I was a straight-A student with over a 4.0 GPA and a total theater geek. I rocked flannel pajama pants most days and wasn’t shy about my water bra. I was lucky enough to be enrolled in a hippy dippy Northern California high school with an “anything goes” mentality. I sang songs from *Wicked* , *Rent*, and *The Sound of Music* at the top of my lungs through the parking lot with the windows rolled down and still got asked to prom. I had a 1996 puke-green-colored Mercury Mystique that we purchased from a 90-year-old woman who couldn’t turn her neck. It beeped as loudly and as powerfully as a garbage truck when I backed up. Fitting in was about NOT fitting in. Authenticity was celebrated, not just tolerated. I felt free to feel, question, and dream.

> I felt free to feel, question, and dream.​

I lost that when I became an Angeleno, and even more so when I became a recognizable TV actress at 24. Two hours plus in hair and makeup for any appearance wasn’t a choice, it was a required necessity, a professional responsibility that this soccer-short-lovin’, pajama-pant-wearing tomboy wasn’t accustomed to. The joys of immediate social-media feedback made it difficult to enjoy the “glamorous” evenings of dress-up (especially once you realized your Spanx were showing and all over the Internet in the dress that took an entire afternoon on your day off to pick out and have tailored perfectly).

I started feeling like the way I looked on a red carpet was almost as important, if not more important, than actually doing my job of making people laugh. Being in the “cool kids fashion club” was a necessity I felt was imperative to stay relevant.

Any time I wasn’t working on set, I felt lost. I desperately searched for a sense of self through trying the latest workout crazes, drinking tall glasses of wine, and wasting hours on web-perusing, but all those activities provided was a temporary escape. I feared the *feelings* that arose from the constant need to please and to find that “something” that was missing.

> I feared the feelings that arose from the constant need to please and to find that “something” that was missing.​

Enter Mother Nature. Reading the book and seeing the film *Wild* (and being incredibly moved by both Cheryl Strayed’s story and Reese Witherspoon’s portrayal of Cheryl) encouraged me to seek out my own nature challenge to reconnect with who I was; to remember what made me *me*. I did some research and found an incredible organization called Trail Mavens that took inexperienced women on outdoor adventures. My two best friends since freshman year at UCLA were also up for the challenge. They have known me for more than ten years, and I feel like I can be both my best and worst self around them. I lived with them for multiple years, sharing a one-bedroom and a bathroom the size of a closet, so cohabiting in a tent and doing our business in close proximity in the woods wasn’t new or embarrassing territory for us.

We embarked on a woodsy camping adventure with an incredible woman (whom we’d never met and who luckily wasn’t a serial killer) named Sasha. We hiked 15 miles a day with 25-pound backpacks along the Point Reyes Seashore. We let go of our cell phones, our computers, and our boyfriends and embraced vicious mosquitoes, a two-mile-long “walk of shame” through poison oak, and the Zen of the outdoor pee. We sang musicals along the trail and played hide-and-seek through secluded ocean caves.

It was one of the best weeks of my life, shared with three unbelievable women whom I am lucky to call my friends. Spending every waking and sleeping hour outside was invigorating. The smell of the crisp ocean breeze, blooming wildflowers, and the Bishop pines enveloped me with an inner peace and calm I hadn’t felt since childhood. I hadn’t realized how much of my life is spent in studios, my car, and in and out of office buildings and indoor workout classes until I was away from them. I was completely removed from Hollywood and the “trolls” perusing social media, so the day-to-day pressure that stems from that completely disappeared. I was able to relax into the “old me” without fear of judgment.

I now spend my free time outside whenever I have the chance. I’ve discovered that Los Angeles is more real than it seems. You just have to know where to look. I recently rescued a horse, which allows me to log hours at the barn in the Topanga Canyon mountains. I paddleboard in the Pacific Ocean whenever possible, and my New Year’s resolution is to become better at surfing so I can spend even more time in the water. I have “hike meetings” at Griffith Park and work out *out* side more than *in*.

There is a beautiful French saying, “*être bien dans sa peau*,” which means “well in my skin.” When I am outdoors I am “*bien dans ma peau*.” Being outside gives me the knowledge that there is something bigger than myself, which in turn makes me feel like the girl in pajamas in high school — confident, carefree, self-loving, and strong with who I was internally without worrying about what was going on externally. Trail Mavens taught me how to navigate the trails, but it also led me on a “wild” journey to find something that I thought was no longer possible in the world I lived in. I thought it existed only outside, but it turned out to be inside all along.

*Beth Behrs is an actress best known for her role in* 2 Broke Girls *and is also a lover of animals, theater, and writing comic books.*