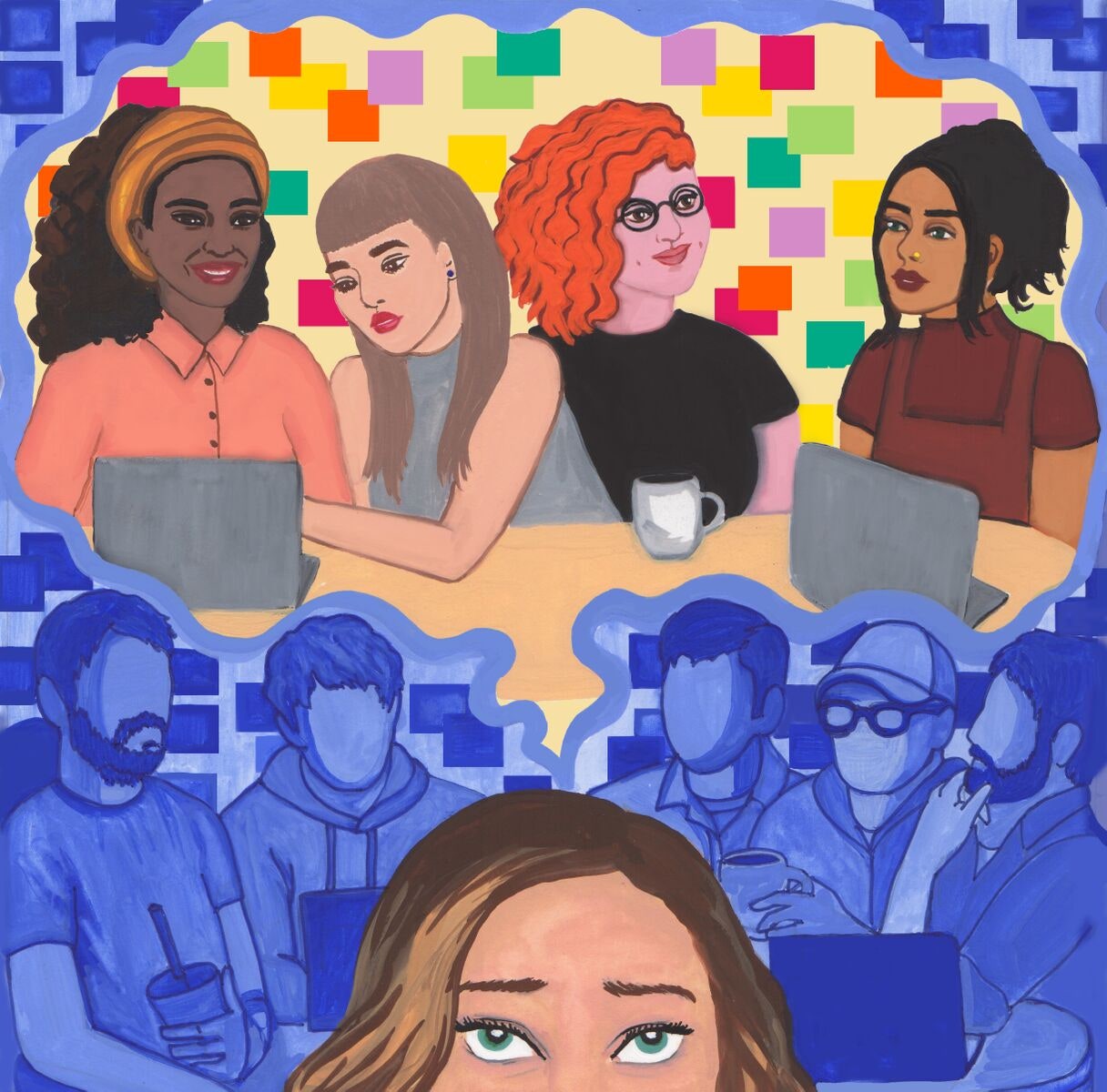 We’re just super-rare. Like a helpful comment on a YouTube video. According (6), out of 155 writers currently working on the top-ten late-night shows, there are only EIGHT women of color. That’s about 5 percent. We MUST do better.

How? (1), which is the union that represents TV, film, and some digital-content creators, has proposed a diversity tax credit in New York State that will tangibly increase the number of women and people of color in writing and directing positions. But it’s facing opposition, mainly because of ignorance. But more on that in a moment.

First, a little about me. I’m currently a writer and performer on *The Nightly Show with Larry Wilmore* on Comedy Central. For the first season and a half, I held the title of head writer (the first and only black woman in history to have that title, *cough*). I was also the head writer for this year’s (2) (yes, the N-word one).

Comedy is a part of my genetic makeup. My father named me after Robin Williams. So it makes sense that my dream, ever since I was a little girl watching Gilda Radner play Roseanne Roseannadanna on *SNL*, was to work on a late-night comedy/sketch/variety show in New York City. It took me nearly 13 years of working in the business to realize that dream. It took ten years before I sat in a writers’ room with another woman. It took four more before I was in a room with more than one woman.

> It took ten years before I sat in a writers’ room with another woman. ​

Which brings me to the reason I’m writing this. If you know anything about late-night comedy or if you just read the first few sentences of this article, you know that the world of late night is dominated by writers who are two things: white and male. I’m lucky enough to work on a show that employs 50 percent women and minority writers, but sadly this is an anomaly in the late-night landscape. Most shows have only one female writer (if any) or one writer of color (if any), with *Full Frontal* *with Samantha Bee* being a notable exception, which has about half women writers.

And this isn’t just an issue in late night. Women writers and writers of color are chronically underrepresented in television and film across the board (Shonda Rhimes can’t do it ALL, people. OK, she can, but she shouldn’t have to). While scripted shows tend to be slightly more diverse, only 28.7 percent of television writers overall are women, according to (3). The film industry is even worse, with women writers making up only 16.9 percent. Minority writers make up 13 percent of TV writers and a measly 7 percent of film scribes. If these numbers don’t make you angry, they should. They certainly piss me off.

Now, you might be asking: “Robin, why is it so important to hire women and people of color? White men have been making great TV and movies for years.” To which I would politely respond: “Are you an idiot?”

This trend of exclusion of women and minorities in the writers’ room and behind the camera as directors needs to change. Immediately. Before this past year, with the rise of #OscarsSoWhite and many artist-activists speaking out, not much was being done. But now the WGAE, in conjunction with several other unions, is proposing an amendment to the Empire State Film Production Credit that could change the culture and the business as a whole.

> This trend of exclusion of women and minorities in the writers’ room and behind the camera as directors needs to change. ​

I’m not going to get too far into the weeds of this thing, but here’s the basic deets: out of the current $420 million credit for film and TV productions in New York State, the amendment would allot *less than 1 percent* ($5 million) to be used as a credit for productions that hire qualified women and people of color as writers and directors. The credit allows $50,000 per writer and $75,000 per director.

Before you bristle at the thought of this credit — this is not money paid to the writers or directors. This isn’t affirmative action, a quota, or a mandate. This is about providing an incentive for hiring women and people of color as a part of regular hiring practices. Productions don’t have to use the credit, it is simply there if they choose to. Writers and directors must be just as qualified as any other candidate and must perform up to the same standards. And: it costs no extra money from the state or taxpayers. The $5 million is simply reallocated from the existing $420 million credit. It’s just the right thing to do.

I recently traveled to the New York State legislature in Albany to fight for this amendment. I was proud of the folks who supported it and embarrassed for those who didn’t. Members of the New York Senate who oppose the diversity credit tried to tell us that any adjustments to the Empire State Film Production Credit would “open the floodgates for other changes.” Um, what? That’s like telling the suffragettes that women shouldn’t get the right to vote because then the “blacks” will want it too! It’s ludicrous, and it’s just being stuck on the wrong side of history.

Look at the world around you. Do you see only white men in it? No, you walk by people of all races, religions, genders, and entertainment interests. Why wouldn’t you want a writers’ room to reflect the world as it actually exists? I would love to see more three-dimensional Black, Latino, Native American and Asian characters who can do more than just say one-liners. I would love to see women who are more than just one-note emotional zombies waiting for a man to tell them how to feel (4) on *SNL*).

> Look at the world around you. Do you see only white men in it? No, you walk by people of all races, religions, genders, and entertainment interests. ​

And I bet you want to see these types of women on-screen too. Which is why this tax credit matters for people outside the industry: it’s not only about us getting jobs. It’s about getting TV and movie lovers better, more realistic entertainment that accurately represents their experiences, not just the point of view of some bros in a dingy conference room.

Lest you think that there aren’t women and minorities out there who can write as well or direct films as well as their white male counterparts? See: Jenji Kohan’s runaway hit *Orange Is the New Black*, Issa Rae’s upcoming show *Insecure* on HBO, Dee Rees’s award-winning *Bessie and Pariah*, or ABC’s entire Thursday-night lineup from Queen Shonda. We are here in huge numbers, creating our own projects and our own opportunities despite a historic legacy of closed doors in the entertainment industry.

Mind you, I don’t think lack of diversity in hiring writers and directors is always or even mostly a product of outright racism or sexism (treatment of women and minorities in writers’ rooms and on sets, however, is often rooted in latent or even overt racism, but that’s a different article). I think it’s mainly a problem with the hiring process itself. When there’s a position to fill, showrunners and producers (usually white men) ask writers (usually white men) for suggestions, and they recommend their friends (usually white men), and the cycle continues.

If producers want to take advantage of this credit, they would need to reach beyond their usual Harvard-White-Guy circles. They would need to ask literary agents for more diverse candidates, who in turn would need to look for more women and minorities to keep on their rosters as demand for them increased. Pretty soon the level of access that was once unavailable opens up to everyone. And white men will still have plenty of jobs, trust me.

As Papa Pope says on *Scandal*, black women have to work twice as hard to get half as much. I know this to be true from my own experience and from the experiences of fabulous women and people of color who share their stories with me. I will continue to fight to help them get jobs through my connections in the late-night world, but I’m only one person.

The good news is: you can help right now (and you don’t even have to be a member of the Hollywood elite!). The amendment passed the New York State Assembly, but it still needs to pass through the Senate and be signed into law by Governor Cuomo. If you support this legislation, please call or email the governor and the two key senators below by June 16, and if you do, include the amendment number: S-5448A Film & TV Tax Credit Diversity Amendment. I know it requires more than a retweet or just pressing the “like” button, but aren’t we all craving a little more sophisticated communication these days? Your small effort can literally make TV and film better and help provide opportunities to countless qualified writers and directors. And it’s free!

Head of the Independent Democratic Caucus

*Robin Thede is a writer and performer on The Nightly Show with Larry Wilmore. She can be found on twitter (5).*