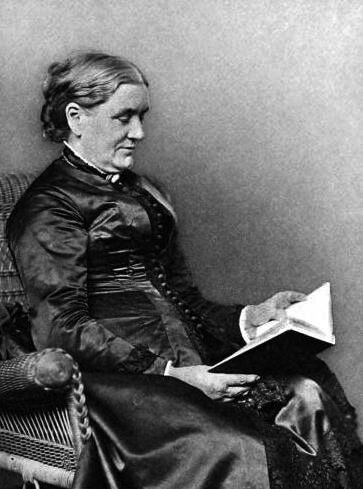 I found Lucy Larcom’s 1890 memoir _A New England Girlhood_ in October. It was in my parents’ downstairs closet, beneath business files and years’ worth of bad Christmas presents people were too lazy to return. Purchased by my grandmother, presumably for the $1.75 printed on the cover, the yellowed copy was published in 1961 as part of a now-defunct publishing house’s series on “American Experience”; its companions include the letters of Christopher Columbus, a biography of Harriet Tubman, and a weird number of volumes about failed utopian communities.

The paperback edition, which seems to be of no sentimental value to anyone in my family, includes a bizarrely hostile introduction by the late Princeton professor Charles T. Davies, who writes, “If we think of Lucy Larcom at all today, we remember her as one female poet in a steady and sedate procession of others like her.” He continues: “One poetess seems to be indistinguishable from another, and all were moral, sentimental, persistently feminist, and limited.” Though Davies does go on to offer up a few dim compliments (he praises Larcom’s “accurate memory”), one wonders why so antagonistic a critic was chosen for the job to begin with, or why he accepted it.

Larcom’s own preface to her book, written in October of 1889, appears immediately after Davies’s and reads almost like a rebuttal. Like today’s most-media-savvy girls, Larcom is cognizant of — and even seems to wring ammunition from — her belittling detractors (always older, usually male). “My audience is understood to be composed of girls of all ages, and of women who have not forgotten their girlhood,” she begins. “Such as have a friendly appreciation of girls — and of those who write for them — are also welcome to listen to as much of my narrative as they choose. All others are eavesdroppers and, of course, have no right to criticize.” It is a document that with two minutes of tinkering could appear online tomorrow as a _Rookie_ magazine editor’s letter.

Larcom, who could have never predicted the existence of an audience anything like the kind that exists today online, seems still somehow to have anticipated it. Despite its indefinite article, her chosen title — _A New England Girlhood_ — sounds definitive, that generic “a” implying both modesty and authority. _Here is the story of my past_ , she is saying, _it’s mine, but it is other peoples’ too_ .

The daughter of a maritime merchant, Larcom was born in Cape Ann, Massachusetts, in 1824, the ninth of ten children. Remembering the birth of her younger sister, Larcom explains, in characteristic deadpan, that although she was sometimes jealous for attention, “gradually I accepted the situation.” “We were a neighborhood of large families,” she recalls, “and most of us enjoyed the privilege of a ‘little wholesome neglect.'”

When she wasn’t out exploring the verdant coastline, Larcom was memorizing hymns, writing poetry, and reading romance novels. Though her early childhood was spartan (special treats included, and were more or less limited to, raisins and particularly dulcet-sounding sermons), Larcom thinks of her youth fondly and with moral clarity: “Like a plant that starts up in showers and sunshine and does not know which has best helped it to grow, it is difficult to say whether the hard things or the pleasant things did me most good.”

And there were quite a lot of hard things. Her father died when she was eight years old, and her mother, suddenly strapped for cash, moved the family inland to Lowell, where she bought and began running a boarding house, sending Larcom and her siblings to work in the local factories. About this dismal change of circumstance, Larcom is relentlessly positive. She recounts with real joy the friendships she forged over what was certainly unpleasant and premature manual labor. What saves her spirit, Larcom explains, was her lifelong love of hymns, which in Lowell she parlayed into a literary and intellectually aspirational life. She wrote for and helped edit a newspaper put out by fellow factory girls (all of them abolitionists) who also organized and participated in a kind of ad hoc educational program, studying — along with their Bibles — botany, ethics, and German. “For twenty years or so, Lowell might have been looked upon as a rather select industrial school for young people,” Larcom writes.

> Like today’s most-media-savvy girls, Larcom is cognizant of — and even seems to wring ammunition from — her belittling detractors (always older, usually male).

It’s here, among her female peers, that Larcom begins to articulate her rhetorical tastes and pedagogical beliefs. “Write more of what you see than of what you feel, and let your feelings realize themselves to others in the shape of worthy actions,” she declares. As for whether children should be exposed to real poetry, she argues of course they should: “Nature does not write down her sunsets, her starry skies, her mountains, and her oceans in some smaller style, to suit the comprehension of little children.”

When her older sister announces that she is moving with her husband to Illinois (an area known as Looking Glass Prairie), Larcom decides that she will join them. Her chief objection to the Midwest seems to have been its lack of rocks (“If we could have picked up the commonist one, we should have treasured it like a diamond”), but she stays for almost a decade, working as a schoolteacher before returning to her beloved New England.

Over the course of the 274-page book, one learns some exceptionally charming facts (that houseplants were once thought of as pets; that the term “piggbacky” is a perversion of “pick-a-back”) and gains a sense of just how pollinated New England was with colonial imports (monkeys were not an uncommon sight in coastal Massachusetts; neither were coconuts). And the asides that lace Larcom’s narrative offer up a pleasingly miscellaneous but not inaccurate survey of 19th-century popular culture. She recalls eagerly awaiting the serialized Charles Dickens, complaining about the “ridiculous” trend of saleswomen calling themselves salesladies, rolling her eyes at the “professors” of phrenology, and awing at the invention of the daguerreotype (“When we heard that the sun was going to take everybody’s portrait, it seemed almost too great a marvel to be believed”).

By 1840, five years after Larcom had arrived in Lowell, 90 percent of New England’s factory workers were female. That year, with money supplied by mill owners, Larcom and a group of other young working women founded the _Lowell Offering,_ a monthly periodical by and about the “mill girls.” The novelty of the magazine’s founders drew national attention, and during its five-year existence the journal acquired hundreds of subscribers from across the country. Many of its contributors went on to have illustrious careers: Harriet Hanson Robinson became one of the most famous suffragettes, and Betsey Guppy Chamberlain published some of the first writing by a Native American woman about the U.S. government’s ill treatment of its indigenous people. Larcom, though, was the magazine’s most frequent and esteemed contributor, and in 1881 she wrote “Among Lowell Mill-Girls: A Reminiscence” for _The Atlantic._ Nearly ten years after that, _A New England Girlhood_ was published to some acclaim.

For decades, critics — both male and female — have taken it upon themselves to adjudicate the value of women’s memoirs. Advocates have mounted defenses steeped in philosophy, riddled with theoretical jargon. I have read quite a bit of it, and though I’ve never been a skeptic, I do often find the campaigning to be tedious if not downright delusional in its excess of protest. Though florid and relentlessly figurative, Larcom’s justification for autobiography is one of the best I’ve encountered:

If an apple blossom or a ripe apple could tell its own story it would be, still more than its own, the story of the sunshine that smiled upon it, of the winds that whispered to it, of the birds that sang around it, of the storms that visited it, and of the motherly tree that held it and fed it until its petals were unfolded and its form developed.

When “Among Lowell Mill-Girls” came out, a Philadelphia reviewer called it “wholesome reading for young people.” It is now, 125 years later, wholesome reading for older people too. It’s both heartening and dismaying to be reminded that the pleasures and perils of young women writing about their lives were just as present then as they are today.