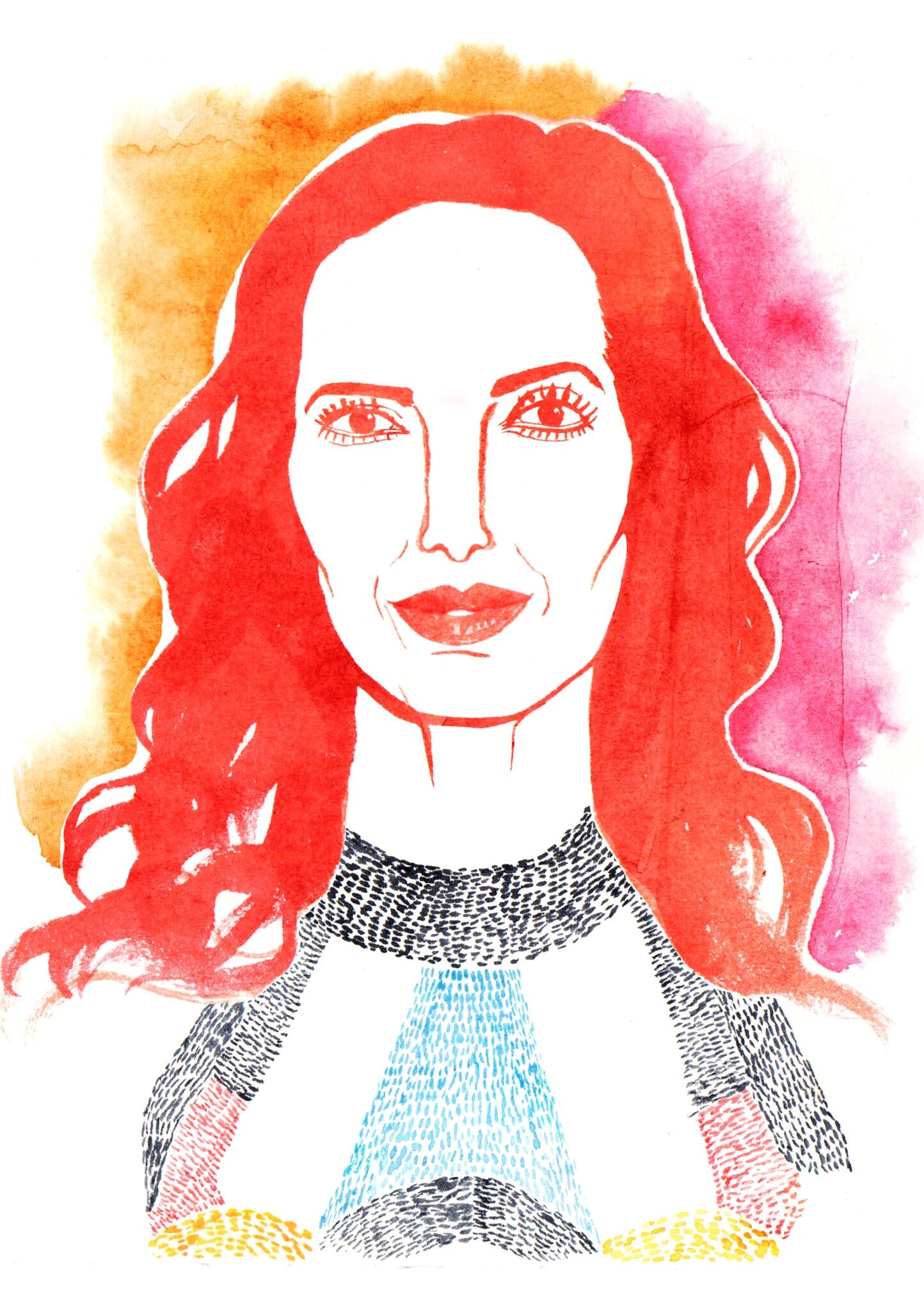 ​Padma Lakshmi is a visible woman: as a model, as the perennial host of _Top Chef_, as a writer of cookbooks and style columns. She’s used this power to co-found a nonprofit, the   (2), to bring recognition, research, and education to a common gynecological condition. Lakshmi’s own story with the disorder reflects the stories of many: beginning with her first period, she battled pain and nausea a week out of every month for 23 years, until her diagnosis at age 36. I got her on the phone to talk more about her awakening to the diagnosis and her work helping others to do the same.

**Lola Pellegrino:** Your mother’s a nurse and your father’s in the pharmaceutical industry, so I’m assuming you grew up pretty familiar with medicine and that whole world, which makes it even more shocking that you went undiagnosed for so long. Do you remember the first time you heard the word _endometriosis_?

**Padma Lakshmi:** Growing up in my house, it was very open. My mother and I talked about stuff all the time. I just think she was conditioned to think that the pain I was having was normal. She went through it, and she was prepped to accept it by her mother, so she did the same with me. Nobody had ever said the word _endometriosis_ to any of us. We just thought, _Some women have cramps, some women don’t._ And when you’re just told that there’s really nothing to be done, that this just happens, you become resigned to it, I guess.

So, the first time I heard the word _endometriosis_ was in Dr. Tamer Seckin’s office. I was 36. I did have good insurance. I did go to my checkups. I did have various gynecologists in various cities examining me on a regular basis, and they would prescribe me pain pills or ask me if I wanted to go on birth control, and yet nobody ever said, “Maybe we should go in there; maybe we should do a biopsy. Maybe we should see if there’s tissue that needs to be removed.”

I was on the pill for most of my 20s. But I used to smoke, and I didn’t want to take the pill while I was smoking, so I stopped when I was 30. That’s when the endo came raging back and became such a problem that I was rushed to the emergency room. At that point, a doctor did say, “OK, you have a couple of ovarian cysts. Let’s remove those,” but he never said anything about endometriosis and he went ahead with surgery.

**LP:** It must take such strength to be able to know that one week out of the month, at the very least, you’re going to be borderline incapacitated. How did you manage that? How did you take care of yourself?

**PL:** Oh my God, yeah. I modeled after college, and I knew I couldn’t take any assignments the week my period was due, because the few times that I did wind up working while having my period were just horrible. I would run and throw up, or just be so doubled over in pain that it just wasn’t worth it. So I booked out.

I made sure my prescriptions were filled. I would live on hot tea and heating pads and hot-water bottles. I tried acupuncture. I would smoke pot. I would do anything and everything and all of it, because it was like, “OK, those days are coming. Batten down the hatches.”

**LP:** There’s this stigma, especially with women, about weakness. Like, “Oh, you’re just going to lie there?” And I don’t think people realize that to keep going requires an enormous amount of strength and planning and effort. I think that people should get more credit for that.

You were a model, too, and when you’re a model, your body is your whole livelihood. That can come along with its own set of pressures and tensions on top of what you were already dealing with. Was your relationship with your body even more complicated because of your undiagnosed endometriosis?

**PL:** Absolutely. Listen, endometriosis develops part and parcel with your womanhood, and so you can’t help but have it skew your relationship with your physical self. We’re always talking about, “Oh, she’s blossoming into a woman.” I didn’t feel like I was blossoming. I felt like there were these explosions in my abdomen. Puberty, my period, it didn’t feel like this wonderful new time in my life — it wasn’t like all those tampon commercials make it out to be, like, “Oh, your period can be fun! Ride a horse and go to ballet, take that extreme Pilates or yoga class!” I was lucky if I could even walk down the street on my own two feet. So, from the start, it mangled my relationship with my body.

Beyond the physical symptoms of this disease, it’s important to remember that the emotional and hormonal fluctuations caused by endometriosis are very real and staggering. Adolescence is such a tender and vulnerable time in a young girl’s life, and to add to this strife is really hard. It’s a very isolating disease. I talked about my pain with my mom; it wasn’t like I was ashamed of it or anything. But nobody wants to call their boss or their teacher and say, “I can’t come in because I have my period.” It felt so icky.

**LP:** As a nurse practitioner, I work primarily with teenagers, and this issue has always been something very dear to my heart. People come in, they’re very young, they’re scared and shy, they’ve just had their first period, and it hurts. And some of them don’t realize for a very long time how much it hurts, or that it’s not normal to not be able to go to work or school or participate in things because of your period. And so the work that you’re doing with your foundation and your outreach, I’m just like, “Gah, this is where it’s needed.”

**PL:** Thank you. I started the Teenage Education Program because I know that when I was a teenager, I did not want to go to the gynecologist. Look, I’m a 45-year-old woman and I still don’t want to go to the gynecologist! So, I felt like the first line of defense was with the school nurse, and so far, we’ve been able to present to every public-high-school nurse in the five boroughs of New York City.

Then I realized I wanted to talk directly with the students, because I meet a lot of young girls with endometriosis. When we present, we don’t just present to the girls, we present to everyone at the same time, and I have to tell you that the boys are just as responsive as the girls. They ask really thoughtful questions, and they’re not squeamish about it because we’re getting them so young. I want to change the way this country and our culture looks at this disease. I want it to be as normal as somebody getting a mammogram or a prostate exam.

**LP:** That is so real. Did you have a come-to-Jesus moment after your diagnosis that led to all this great work?

**PL:** I did. It was after I healed from surgery, and I actually have a memoir coming out in March where I talk extensively about it. What happened was that I started feeling better, and for the first time in my life since I was 13, I understood what “normal” women live like. Before, I had always had this shadow over my head: this thing, this yoke, this ball and chain. If you talk to anyone with this disease, that’s what they’ll tell you.

I was in this place where I just kept thinking, _What if I had been diagnosed at 20? Or 25, or 30, or shit, even 35?_ I didn’t get help until I was 36. Think of all that time that I lost: times that I couldn’t go on a second or third date; times when I missed jobs; times when I missed school exams, school dances, volleyball games, being present for my family, being present for my girlfriends, taking an extracurricular activity, being emotionally and physically OK. That’s one week every single month for all those years. That’s 25 percent of my life, and I could never get that time back. It made me angry, and so that’s why I started the Endometriosis Foundation, so other women wouldn’t have to lose all that time.

**LP:** It’s almost like you’re doubling their time, because by educating people, you’re doing the work of giving others their lives back before they even lose them, which is amazing.

**PL:** Right, so that was my come-to-Jesus moment. First, my doctor asked me to speak to a couple of young girls who happened to have seen me walking out of his office. And so I started talking to them and telling them, “You’re not alone. This has nothing to do with anything you did. It’s not because you’re a bad person. It’s not because you’re a ninny or a sissy about pain. You don’t have to ‘buck up’ and take it. That’s not what this is about. You should have every opportunity to live a full and productive life, just like everyone else has a chance to.”

The truth is that if you have endometriosis, it’s something you’ll have to deal with for the rest of your childbearing life. But if you can’t even identify it, if you don’t even know what you’re managing, then you don’t have a fighting chance. I want young women to have equal opportunity, and that equal opportunity includes having a healthy body and emotional well-being. We have this thing that it’s like, “Oh, well, my lot in life.” It doesn’t have to be. There are a lot of things that we can’t do anything about. This is not one of them.

*If you’re preparing to see a specialist about endometriosis, read this primer from the (3) about what to know and what to ask.*

(1) _is a gynecologist, nurse practitioner, and writer._