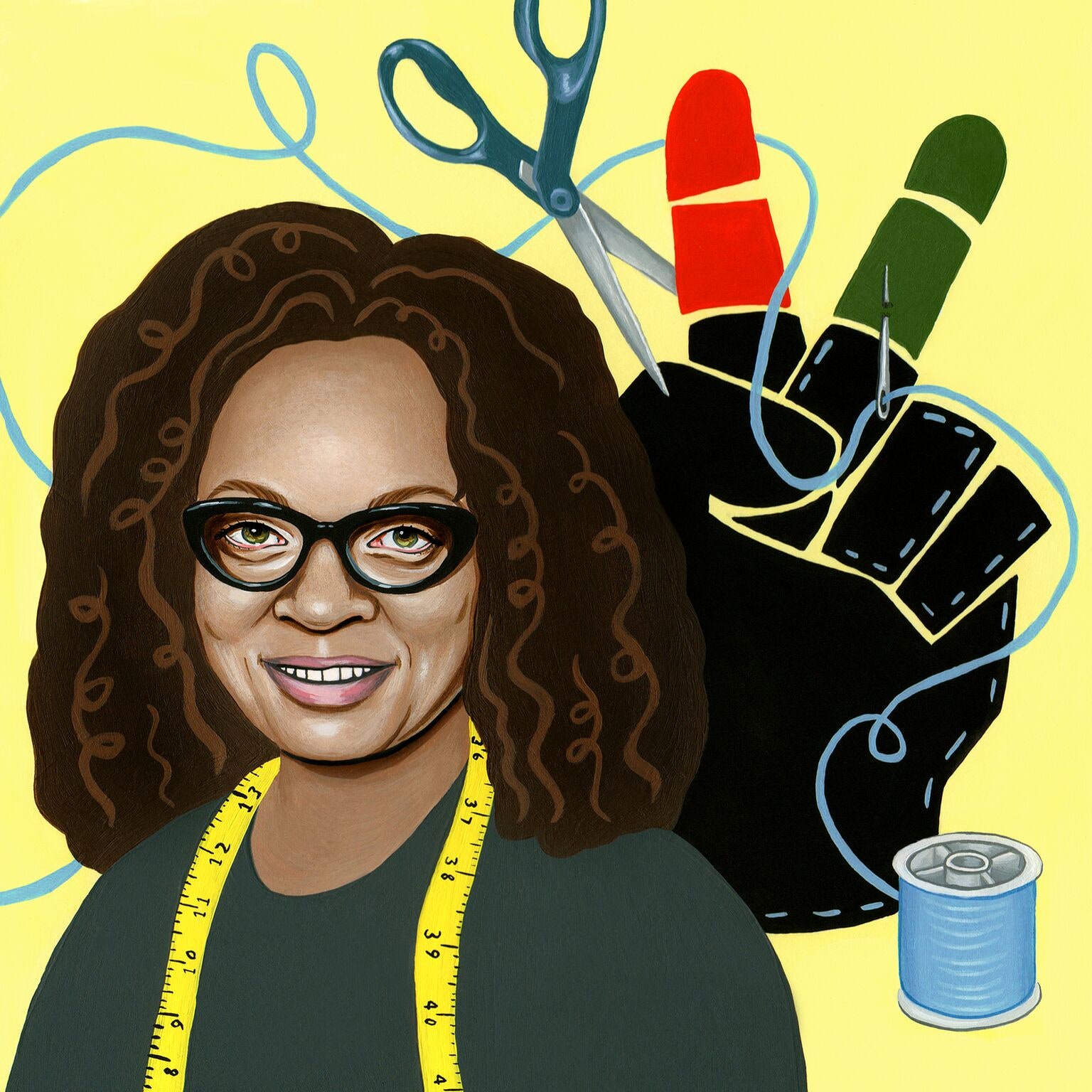 I had to resist the urge to wear one of my homemade *Hamilton* costumes to my interview with costume designer Ruth E. Carter. We were meeting to chat at San Diego Comic Con, and when I wasn’t working I was running around dressed as a character from the Revolutionary War–era musical *Hamilton,* because that’s just what you *do* at a comic-book convention. And because I wanted to impress her. But in the end, I kept it cool and denim casual, because the topics I wanted to discuss were a little too weighty for four sets of corsets.

A frequent Spike Lee collaborator, Ruth designed a significant part of my childhood. Halle Berry’s gold teeth and orange jumpsuit in *B*A*P*S*, the blond high-tops on the gangs in *The Meteor Man,* and that black trench coat that embodied the 1970s cool of *Shaft* in 2000 are all crystallized images, firmly embedded in my memories of growing up in the ’90s and early aughts. As a black woman who loves vintage clothing, I find many of the looks she’s created for black actresses aspirational. As a student of American history, her work has made it easier for me to paint a clear picture in my mind of my own past and how it directly relates to my present.

Ruth has created costumes for nearly every type of protest, movement, and rebellion in black American history. She’s dressed revolting and runaway slaves, anti-lynching leaders, civil-rights icons, and gun-control activists, just to name a few. This aspect of our work was made unfortunately more relevant by the timing of our chat — two weeks after the police shootings of two unarmed black men, Philando Castile and Alton Sterling.

In the few minutes she had between panels, we chatted about how Black Lives Matter has influenced her thinking on her newest project, Ryan Coogler’s Marvel film, *Black Panther*; the arc of protest fashion; and what clothing says about the movements who don it.

**Kendra James:** Your costumes for *Roots* looked meticulously researched, especially in contrast to the generic loincloths and patchwork leathers from the ’70s version. Is that informing your designs for *Black Panther,* where you’re creating an aesthetic for the fictional African nation of Wakanda?

**Ruth Carter:** I’m looking at the whole continent and a wide range of people, like the Masai and the Suri. It all becomes a part of the framework of Wakanda. Most people who read the comic books know Wakanda is a mountainous area; it’s a secret place that’s not necessarily trading and interacting with the rest of the world. They’re a little bit more advanced in technology than other civilizations. We are creating that world, and trying to create a culture and pride that feels authentic to the specific location.

**KJ:** Pop culture often forgets that Africa is a large, diverse continent, and it’s often homogenized in Hollywood. Do you feel an extra weight of responsibility because of that?

**RC:** Oh, yeah. I do. I felt it with *Roots,* and I feel it now with *Black Panther.* That authenticity is very important to me. With Wakanda, I’m sort of piecing together a puzzle. It’s the puzzle that is our history. Black history didn’t start with slavery or end with the civil-rights movement. I’m trying to put together that puzzle while considering everything that relates to us, including present stuff like the Black Lives Matter campaign.

We’re speaking to an international black culture that knows film, that’s smart, that travels, that knows what’s happening in the world. I want to respect that. I start designing by saying “Don’t make it up.” After the research, *then* I can make it up.

**KJ:** You’ve costumed almost every type of protest and rebellion throughout the Black American experience. What kind of insight has that given you into the nature of how protest has evolved?

**RC:** The dress codes are always unique to the protests, if they can be, and to adhere to the uniform has always been a large part of committing to the cause. For instance, in the ’60s they wore the trench coats, and they padded themselves underneath, and part of the posture was to keep their hands in their pockets when they marched to show that they were nonviolent. I love that trench coat.

The ’70s was the Afro, even though that’s not specifically clothing. Say it loud, I’m black and I’m proud, right? The bigger your Afro, the badder you were. It’s similar to what kids do when they sag their jeans today. It becomes a radical fashion, just like the zoot suit was back in the ’40s. Now? We’re a T-shirt culture. So you see a lot of message T-shirts in the Black Lives Matter movement.

**KJ:** It’s so interesting that the fact that wearing your hair the way it grows out of your head is a political statement.

**RC:** Exactly! And then here’s all of these really cool things that come into mainstream fashion, stemming from protest fashion. That meshing of the two helps calm the waters so that people that want to make a statement can wear it without their boss or their colleagues at work feeling like they’re making too much of a statement, but they are still proclaiming their self, self-pride, pride in their culture, pride in their history, and taking a stance for justice.

Sometimes it’s not as obvious, but I think that Black women in the movement are starting to be a little bit more natural, a little bit more Afro-centric. We’re taking the weaves out, we’re getting out of the heels.

**KJ:** Do you have a favorite look from your résumé?

**RC:** There is a costume I’ll never forget from *Malcolm X*. We went to Egypt, and I put Denzel in the traditional Muslim garb and seeing him… well, I was right in the middle of the desert, feeling like I had really taken Malcolm’s story full circle as we watched him go on that hajj to Mecca. Before *Malcolm X,* many people saw Malcolm and his movement as hateful, compared to MLK. I felt like we were helping people understand his whole movement and agenda with this movie, down to that costume.

**KJ:** From the same era, I was looking at your work from *Selma* and marveling at the clothing on John Lewis and Diane Nash. Diane’s clothing was so impeccably tailored, and she was perfectly put together. For that era of protest, that was part of the uniform you’re talking about too — looking respectable at all times, to represent the face of the movement. Black Lives Matter has completely shifted that — we’re not dealing in the appearance of respectability anymore.

**RC:** There’s always a part of black culture that is well groomed and they take pride in their appearance. The ’60s were a time when everyone, black and white, wore suits, even when they were in protest. You see those pictures of Martin Luther King and the protest marches. People are *dressed.*

**KJ:** What are your thoughts on Black Lives Matter — the movement and the aesthetic, if you think there is one?

**RC:** Black Lives Matter is asking for basic rights. Those shouldn’t be based on appearance! Many of the early Black Lives Matter tees were black, with big, bold, white letters on it. They were screaming at you. What we’re seeing now is more like the Malcolm X side of protests, where we actually want to be a little bolder and not be conformists. And it’s important that it has what some might see as a more “urban” look. We’re past the era of dressing like the Fruit of Islam in bow ties and suits, where their physical presence meant nonthreatening.

*Kendra James is a costume design enthusiast who enjoyed* Chi-Raq *more than popular opinion generally allows her to admit.*