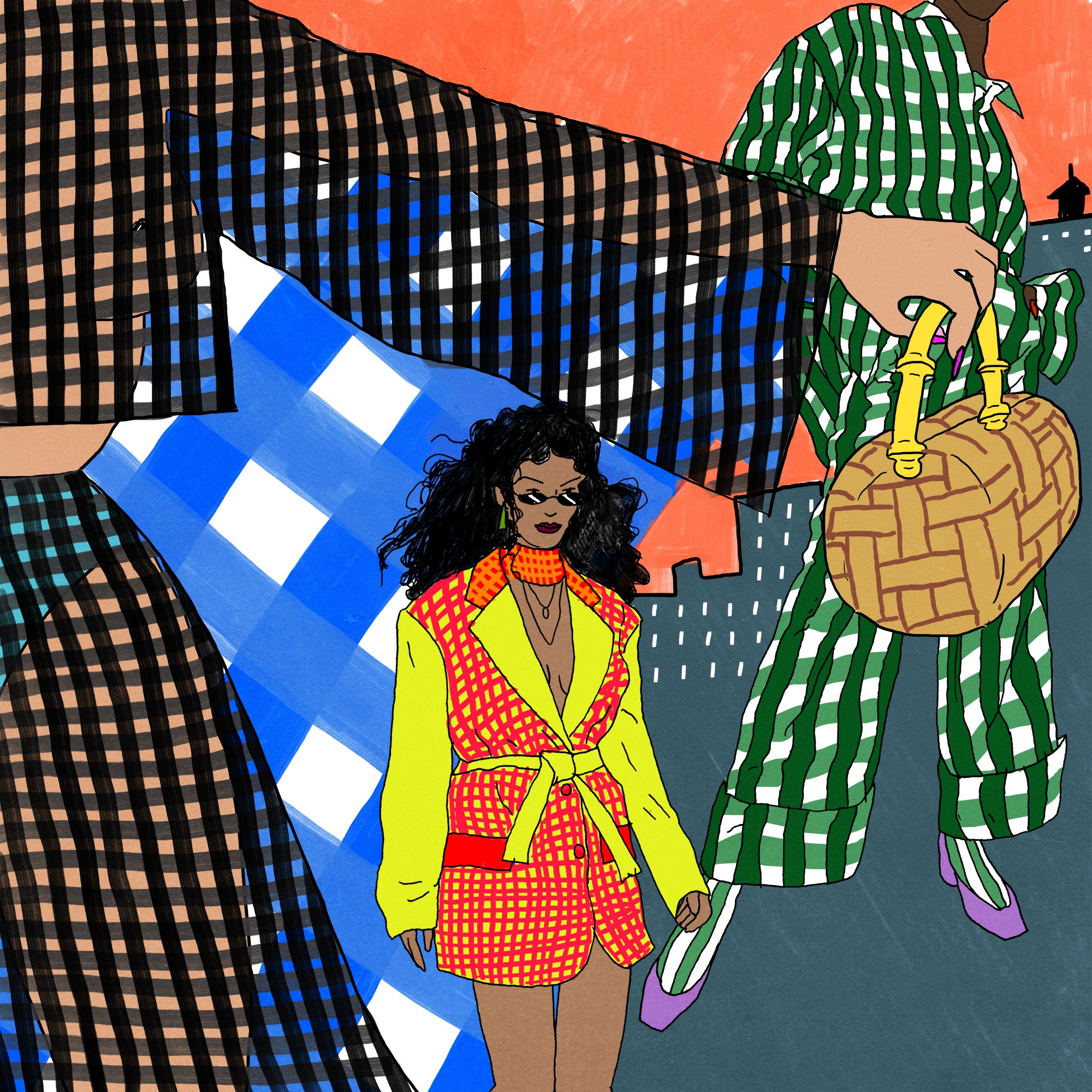 It’s a woven fabric you’ve seen, and continue to see, everywhere: on shorts, tie-up espadrilles, off-the-shoulder ruffled dresses, bikinis, miniskirts, oversize blouses, sheer pantsuits. It’s not plaid, but gingham; not just a trend, but a spring and summer staple. The checked cloth used to immediately bring to mind tablecloths, aprons, picnic blankets, curtains, and anything else pertaining to domestic life. Women like Marilyn Monroe and Brigitte Bardot helped move it away from that 1950s-housewife ideal, but it wasn’t until the ’90s that gingham took on a completely new meaning. And for the past three years, the fabric has been having a bit of a resurgence, with fashion designers reimagining the textile just as culture is blending gender roles even more.

“Gingham has surpassed this identity as a thing that’s trendy,” Britain-born, New York–based stylist Amanda Murray tells me. “I think it should have its own conversation, just as leopard print does. It’s beyond ‘Here’s the thing to wear for 2018.’ I think it’s a little bit more serious than that now. It’s a staple.”

Let’s start with how the textile, whose name comes from the Malaysian word *ginggang* (meaning striped), came into fashion in the first place. It started off as a striped fabric imported from India to Europe and America. In the seventeenth century, Western textile mills started making the fabric in a checked style — it was cheaper than importing it and also a means to boost the economy.

Gingham entered popular culture in the ’30s and ’40s, when the costume-turned-fashion designer Adrian brought it to the main stage. He designed dresses for both Judy Garland in her role as Dorothy in *The Wizard of Oz* (a gingham pinafore) and Katharine Hepburn for her role in *The Philadelphia Story* (a cinched-waist number with a Peter Pan collar). Adrian was also behind a dress for a 1944 *Vogue* fashion shoot, which was a catalyst in the demand for gingham dresses. To Adrian, the fabric, with a usually red-and-white or blue-and-white color scheme, was the epitome of Americana. And with the decline of Paris fashion houses during World War II, a rise of American designers joined him in their love of the fabric. Plus, gingham was a cheap and easily accessible fabric, so even women at home could follow the trend.

Postwar in the 1950s, women were expected to revert to their domestic roles once their husbands returned. This sparked the association of gingham and housewives (aprons and cinch-waisted full-skirt dresses), home décor, and children. It’s safe to say that gingham got boring, becoming a symbol of nostalgia and everything “prim and proper,” of what mainstream society thought a woman should wear and look like. A woman in gingham was a reference to innocence. On the flip side, women who wanted to rebel were wearing men’s shirts tied up with high-waisted denim jeans, à la Marilyn Monroe. Brigitte Bardot wore a gingham bikini in the French Riviera (she also had a wedding dress made in the fabric), which sparked a gingham shortage in France. And Monroe wore men’s gingham trousers with a black turtleneck.

In the ’60s, gingham saw its first sign of rebellion in the UK, with a subversive shift in silhouette. Fashion designer Barbara Hulanicki started a boutique called Biba and was asked by *The Daily Mirror* to create an original piece to offer to readers. She designed a pink-and-white gingham shift dress with a matching kerchief tied under the model’s chin. The newspaper ended up receiving over 7,000 orders, sparking a gingham movement with young women who felt the dress was designed specifically for them. Gingham was not just for movie stars, housewives, and children — it was also for the youth.

Decades later, in 1996, Comme des Garçons designer Rei Kawakubo sent tube gingham dresses with lumpy pads on the shoulder, abdomen, and hips down the runway for her “Body Meets Dress, Dress Meets Body” collection. She told *Vogue*, “It’s our job to question convention … If we don’t take risks, then who will?” Kawakubo challenged not only the ideas of what fashion is but also the ideas of what kind of woman was meant to wear gingham, playing with the concepts of its domestic past.

In the past four years, fashion designers have been pushing the connotations associated with gingham even more.

“Usually when you see something that’s gingham, it’s typically very feminine and girly. Rosie \, A.W.A.K.E., Christopher Kane, and even Altuzarra reimagined it as very sleek, chic, modern, in somewhat architectural shapes,” Murray says. “They’ve made me look at gingham in a completely different way. Even though it’s always been on the runways at Michael Kors and Carolina Herrera, it feels more updated.”

All these fashion designers have reimagined what a woman who wears gingham looks like, moving the fabric from its roots in nostalgia and patriotism to a modern point of view. What does this woman look like today? She can be Dua Lipa on the red carpet. She can be Rihanna in a (5) She can layer a rocker tee under a gingham slip dress. She can be lounging in a bikini. She can be in a shirtdress with over-the-knee boots. She can be in an off-the-shoulder top. The list goes on, but the point is: she makes her own choices, and she can be whoever she wants to be.

*Tahirah Hairston is the deputy editor at Lenny. While writing this article, she bought two gingham dresses.*