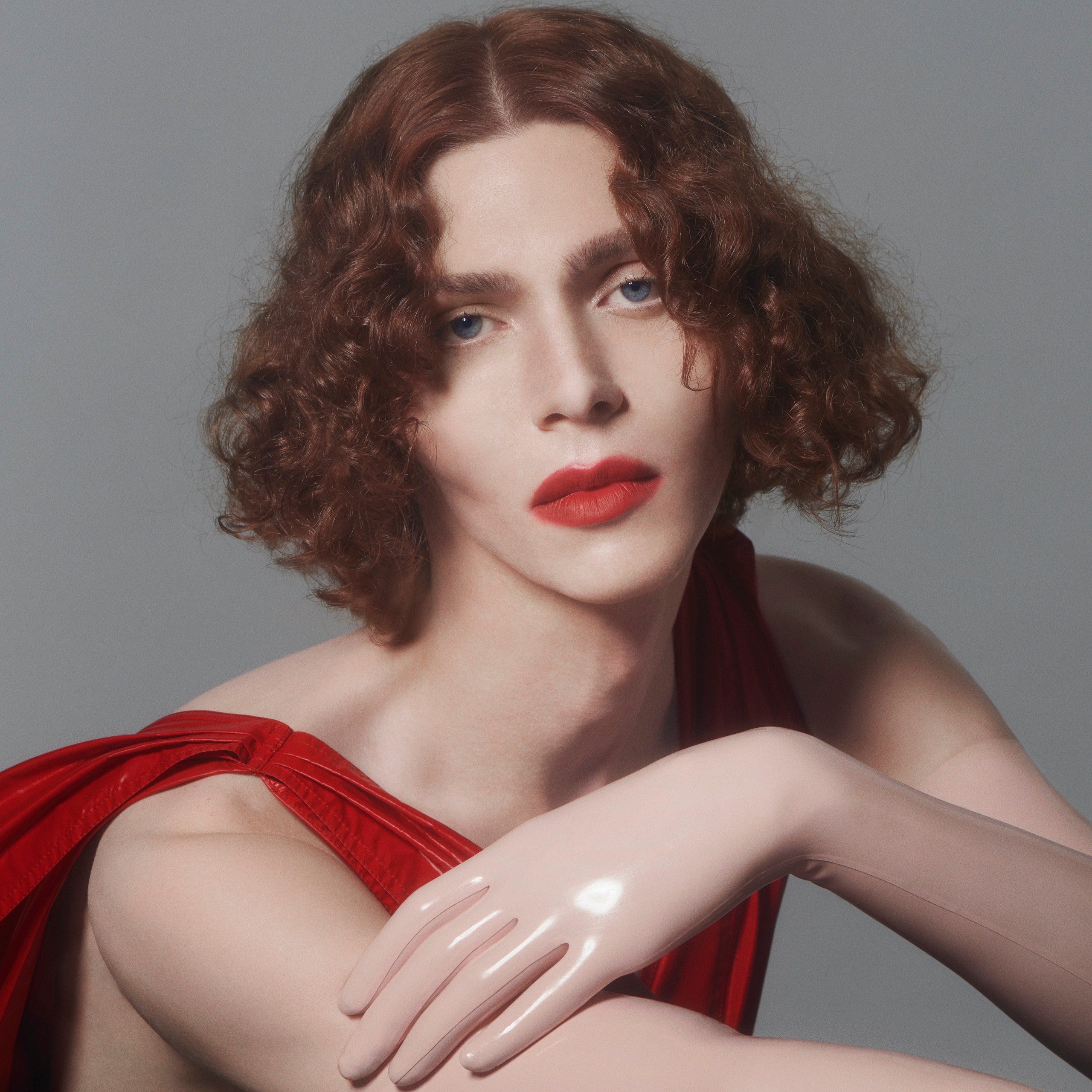 It’s rare to read an interview with SOPHIE that’s not prefaced by “in a rare interview.” The phrase doesn’t seem quite accurate when I meet with the Scotland-born, LA-based record producer, singer, and songwriter to discuss her record OIL OF EVERY PEARL’s UN-INSIDES, which came out last month. Maybe what’s trying to be expressed is the feeling of being in the presence of a rare talent, which she is. She’s also down-to-earth (another favorite general interview tic), checking my hubris regarding efforts to rarefy her. “Perhaps you might be more sensitive to those things than the way I was feeling,” she tells me. That could be. I’m sensitive to the oeuvre of the trans female genius. Listening to SOPHIE on one of the album’s early singles, “Faceshopping,” I thought, *Finally. A song for when I’m hiding less to save face than to save up for one.*

The rare part, which I may be tuning into as a dog-whistle dismissal of what SOPHIE has had to do to thwart the narrative from outpacing the music, is in part a reaction to the video for the album’s lead single, “It’s Okay to Cry,” released last fall. It was the first time we saw SOPHIE, who had previously employed other artists to appear onstage while she remained shrouded in full pop-star regalia: topless, face prostheticized, rained on. “I think it’s kind of ridiculous that you need to do a video that’s a close-up crying in the rain for people to know that you’re a real person,” she says.

When I ask her about her use of the word *real* on “Faceshopping” (“I’m real when I shop my face”), I want to speak about how the definition has evolved for girls like us. We were children when (1) offered up what it could mean to be real, to be those who could “walk out of that ballroom into the sunlight and onto the subway and get home, and still have all their clothes and no blood running off their bodies.” What, I feel provoked by her music to ask, is the price of blooming in our current and changed world?

“Let’s smoke a cigarette for this,” she says, though we really shouldn’t be smoking. But what’s a rare cigarette going to do?

**Thora Siemsen:** What sort of images did you gravitate toward growing up in Glasgow?

**SOPHIE:** Pretty similar things that I look at now, to be honest. A very watered-down version of science fiction. The synth-pop artists of the ’80s were very informed by J.G. Ballard stuff, and sci-fi was actually representing a vision of the future, I think, at that time. For me –– this was pre-teens, nine, ten years old –– it was more *X-Files*. After that, I got really into Matthew Barney and Cremaster Cycle and the distortions of form and gender and material and shape. I loved Amanda Lepore and Nan Goldin’s stuff. I would say they were pretty important images.

**S:** No, I don’t. As my mum says, “Don’t know where she gets it from.” She just can’t imagine where it comes from. I think my dad may have been in an earlier life, but I would never know that side of him. He had brilliant instincts, taking me to raves when I was very young. He bought me the rave cassette tapes before I went to the events and would play them in the car and be like, “This is going to be important for you.”

I said I wanted to quit school when I was nine, ten years old. I wanted to be an electronic-music producer, and obviously they didn’t let me and I had to go through with the whole thing, but he definitely had some instincts that were really important to me. I think there is a creative aspect to that, certainly an ability to see into the future and not be about some bullshit nostalgia. Not someone that’s like, “Sixties, ’70s, this is the real rock and roll.” He was always like, “That was rubbish. Electronic music’s the future.”

**TS:** What is your earliest memory of escaping into music?

**S:** Very early. That’s all I wanted to do. As soon as I’d heard electronic music, I spent all my time listening to those cassette tapes. I’d steal them from the car. It was definitely on the way out at that point. I’m really dating myself. It was initially listening to music, and then I got a keyboard for my birthday. My dad took me to see a friend of his who had an interest in music, electronic music, had some studio equipment, and was redoing his studio. He was throwing a load of stuff out, and it blew my mind going into a music studio. It was a very, very basic studio. The guy was in a completely different business but happened to have an interest in music production. I got a few more bits of equipment to add to my keyboard, and that’s how I would spend my whole time. I used to say to everyone, even at thirteen, fourteen years old, “When I get home from school, I’m just going to lock myself in my room until I’ve made an album.”

I would be on my own a lot of the time, doing music. It was an escapism thing. I also had quite a lot of brothers and sisters growing up, who I’m close with, but they probably had best friends. I didn’t really have a best friend. I had good friends, but music, I suppose, became my escape, like this friend I was looking for that was about the same stuff as me. It takes a while, as you might know, to find your people.

**TS:** I’ve read you talking about trying to get the listener back to childhood, asking questions like: “Are you furious? Are you afraid? What do you feel when you listen to this?” How much are you in conversation with your younger self?

**S:** That’s so interesting that you ask that, because I actually had that moment recently, a few months ago. I was having an experience when I went back to see family, of sitting in the living room where I used to play keyboard, and I could literally see myself there. I just happened to be finishing this album as well.

I was also learning about … I don’t know if you’re familiar with it, it’s called “gestalt.” It’s a way of asking questions and revisiting experiences. It’s a West Coast thing, I think. You’re allowed to reenter into past versions of yourself and then have the opportunity to reconnect with that person and have a conversation. A lot of people use it for trauma, really, really serious things, going back into childhood and holding people accountable for things that have happened. I had some version of that where I was able to thank my younger self for putting in that effort and being persistent and keeping going even though nobody was showing any interest, and pushing through that. I’m literally trying to convince my mum that I’m good at doing electronic music, you know? I still feel the same way, really. I’m trying to convince everyone in the world of that and share the same excitement for it that I felt at that time.

**TS:** Sorry for invoking therapy. I’m from the West Coast .

What was your first professional music job?

**S:** I was a wedding DJ. I did that my whole childhood, basically. My half-sister was getting married and didn’t know what I was doing in my room on my own. She thought I was a DJ, so she asked me to DJ at her wedding. I started learning how to DJ. Other people in the area started booking me for their weddings and 21st birthdays, so that was what I did.

**S:** No, I don’t, because I’ve never lived with examples of where that has been a positive force for the world. The prospect of it felt like a dead end to me, always, and I ran away from anything that got too serious. It’s nice to have a partner and have someone be on your journey in life. I feel like I have partners in life who are going to be there for a long time, but we don’t need to be married, and it’s not a monogamous thing, and we don’t need to have a ceremony to tell us that that’s the case. Even though it’s fun to have a party.

**TS:** What do you enjoy most about collaborating?

**S:** I enjoy everything about collaborating. Basically, I’ve done a whole new album in the last two weeks. I’m getting way more into collaboration again, working with some rap artists, working with hip-hop artists, and working with some friends of mine and really having fun with it. Doing stuff with Kim Petras. I think she’s the most fun performer in the world. She’s so fucking sick, just got the music inside of her. She’s very invigorating for me, in the same way that I feel when I’m working with Charli or Bibi Bourelly. Bibi blows my mind every time we go into the studio.

**TS:** Have you developed any sort of reflexes to the way that people talk about your art?

**S:** I guess really my reflex to how people talk about it is in what I make next. You can’t speak louder than your music. You speak through your music. If somebody says to you, “That’s shit,” I can’t stand there and say, “Actually, it’s really good, guys. Just listen to it again.” It doesn’t work like that. You just need to put something else out that’s better and stronger.

*Thora Siemsen is a freelance writer living in New York City. Her work has appeared in The Creative Independent*, Rolling Stone, The New Yorker, *and more.*