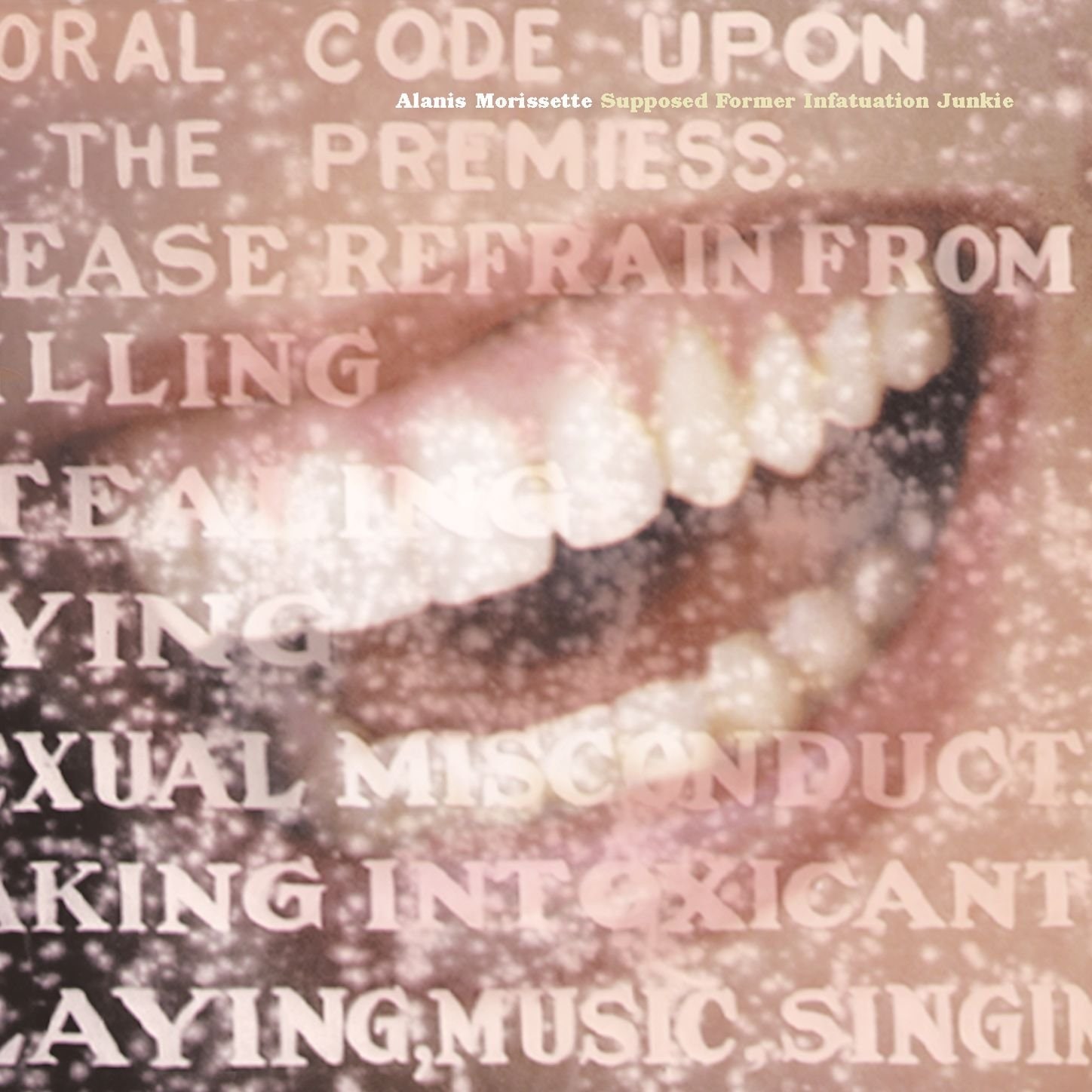 In 1996, in service of my first obsession, I stuck some money into an envelope and mailed it to an address I got from the back of an issue of _Rolling Stone_. Some weeks later, an envelope containing two glossy 4×6 photos of Alanis Morissette showed up in the mailbox of the condo complex where we lived. One of the photos was a medium close-up on a red carpet; in it, Morissette wore a brown leather jacket and a beaded necklace and looked just to the right of the photographer. The other was a neon-lit concert shot that showed her mid-headbang, hair like a gravity-defying weather diagram around her head. I put up the photos in my new bedroom, which, in its all-mineness and newness, felt cavernous and luxuriously private. It was that part in the timeline of my growing up that anyone whose parents split recalls as the moment everything changed. It wasn’t altogether bad for me — I was learning how to be a person, and I needed a lot of room to practice. In my new room, there was no nine-year-old sister snoozing in a twin bed on the other side, and there were no shared walls with our mother, which meant there was no need to turn down Alanis.

_Jagged Little Pill_ came around at the right time to become my best friend. I was twelve and lonely. In the weekends, I roamed the neighborhood tearing Pepsi Points off of people’s paper recycling, sometimes with my kid sister and sometimes alone but always paranoid and checking over my shoulder to make sure nobody caught me. Or I searched for muscovy nests in the shrubs around the artificial lake in the middle of the complex, hoping to go unnoticed (although one time someone did throw a football at me, so I guess I wasn’t entirely a ghost). But when I was home, I put on _Jagged Little Pill_ and let the anxiety I held about being seen while out in public dissipate out of my body and into the room. At school, I was the girl with no personality, but with Alanis, I was someone complicated, someone who opened a conversation by asking “Do I stress you out?,” as per the album’s first line. I played the songs over and over, reeling from their power and their seeming connection to me even though it would be years until I understood most of the lyrics. At night, I had dreams where Alanis and I were just casually hanging out, talking and laughing about nothing.

Her voice was extraordinary to me. I now know it was the practiced instrument of the career musician, and that was why she wielded it like someone who never questioned its potency, but at the time I understood only the changeability of it: the way it broke and whined when she wanted. The yodely extra notes she let out on the inhale after she finished pronouncing a syllable (like on the stuttered “you, you, you” in “You Oughta Know”). And the way her wails were built into the main vocal line, not to show off her chops while backup singers sang the chorus, as was so much the fashion in the ’90s, but to try to express something inexpressible, something you really want. I learned all the album’s words because the power that her voice held over me made me vibrate, and I wanted to sing along with the sound waves. I looked at my pictures of her and sat with the feeling the way you sit with a crush: I just let something bigger than me overwhelm me, and I didn’t question it.

The November 1998 release of _Supposed Former Infatuation Junkie_ marked the first time I bought a record on its release day. It was a couple of years later, and I’d grown apart from my first favorite album; my musical tastes had expanded to include more moody girls, classics my immigrant parents had never handed down to me, ’80s dark wave I found on the cool new Internet, and nu-metal to impress the cool new stoner friends I got when I switched schools. But out of loyalty to the first transcendent experience that was _Jagged Little Pill_, I went to Sam Goody, plunked down cash for the new album, and carried it back to my room. From the first note it was clear that it was different. Where _Jagged_ looks outward at the world, confrontational and making a case for itself, _Supposed_ turns its gaze back in. I played the album a lot, and there were bangers: I loved the menace and frustration of “Would Not Come” and the danceability of “So Pure.” But overall, the album, with its comparatively slower builds and mantra-like, introspective refrains, wasn’t love at first listen the way that _Jagged_ had been.

But the lingering power of _Supposed Former Infatuation Junkie_ is that unlike _Jagged_, its emotional edges aren’t out in the open. This is why it’s the one that stays with me. It’s hard to believe Morissette was only 25 when it came out; the songs have a maturity about them that suggests years of learning the hard way. There’s “Are You Still Mad,” a song that lays out its own fuck-ups, and, instead of apologizing for them, answers its own question with the refrain “of course you are.” To let someone be mad without apology would have been unthinkable to teenage me, who wanted so much to be liked and worked so hard to keep friends that she tried to never let anyone see her mistakes. And “Sympathetic Character,” a song about someone who encroaches on every part of your life until they are your best friend, lover, brother, and teacher. I heard the anger in the song before, but I didn’t understand how a relationship like that meant losing your sense of self because I hadn’t yet let someone steamroll over me. I barely heard the last line: “And therein lay the problem.”

The emotional crux of the album for me, now, is the slowly churning ballad “That I Would Be Good,” which in its earnestness struck me as insufferable for many years. It’s a song about fear and self-doubt as circumstances change around you; it is open about its insecurity. Recently, I mentioned this song while tweeting back and forth with an old friend about meaningful Morissette lyrics; he replied that he hadn’t brought it up because he assumed mid-2000s Niina would make fun of him. But the song’s hopefulness and willingness to show its own work is what makes it a peak now. It’s a thematic counterpoint to _Jagged_’s “Perfect,” a testament to Morisette’s own history as a child star. The song is sung from the point of view of an explosive stage parent with unrealistic expectations who wants to live vicariously through the child and requires she perform perfectly and hide the effort.

But on “That I Would Be Good,” Morissette lays out every vulnerability line by line. After a couple of minutes of repeating the titular line with different endings, she lifts and gets louder, and her voice is so unbearably clear and bright: “That I would be loved even when I numb myself.” For the next several lines she stays in the high register, and then she brings it down, and then there’s that fucked-up, flawed little flute solo that sounds so full of effort. You can hear her breathing in between musical phrases. I used to skip the solo, but what it says to me now is _That I would be good, even if I messed up this flute solo on this highly anticipated record that will go on to sell over 2 million copies._ It makes me weep that someone could, at 25, be this willing to be sincere.

Reading the critical history of _Supposed_ in comparison to Morissette’s first album is fascinating. Critics said that she wasn’t angry anymore, that it showed maturity and introspection, but they also called the album at turns too long, sprawling, and messy (all adjectives which were also used in reviews about my other favorite album from the late ’90s, Tori Amos’s _Boys for Pele_). Maybe the length and untidiness have something to do with a desire to say everything you need to say in one go. Maybe the 70-plus minutes of music represent an uncompromising vision. Whatever it is, I’m grateful for it. A lot has changed for me over the years — I’m no longer lonely, and I’m an adult who gets to make art in the world, for starters. But a lot has stayed the same, too, and sometimes I turn back to the things I knew and loved to hear what they say to me now. _Jagged Little Pill_ is too much of a nostalgia bomb for me to fully enjoy anymore, but _Supposed Former Infatuation Junkie_ delivers meaning I failed to notice the first time around. I suppose, then, that this is an essay in praise of this “sprawling, messy” album, because when I put on my headphones and queue it up, I can still count on finding something new.

_Niina Pollari is the author of the poetry collection_ (1) _and the co-author, with merritt k, of the chapbook_ (2)_._