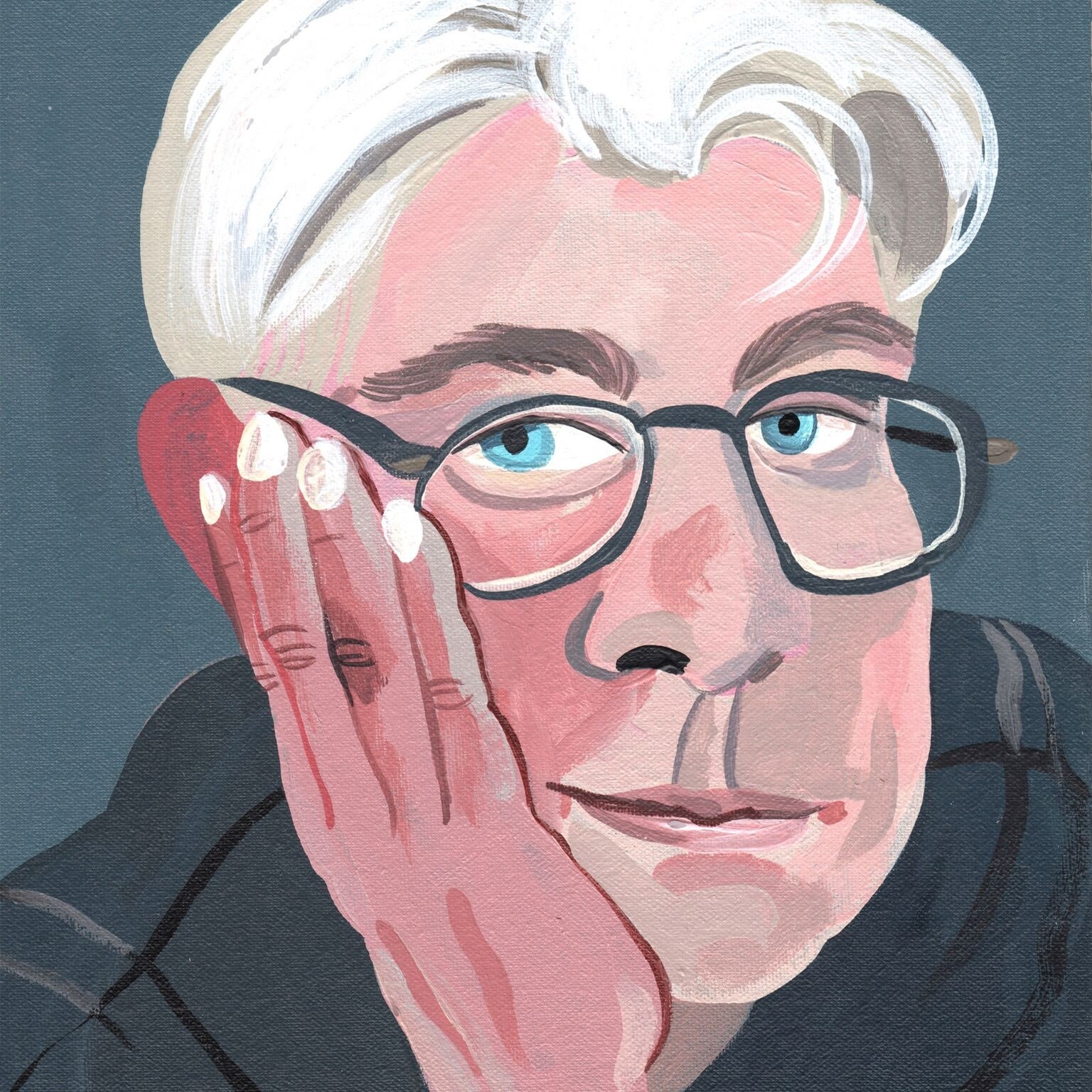 I go to the theater a lot for work — usually twice a week — and nothing has moved me more this year than Paula Vogel’s play _Indecent. Indecent_ is inspired by Sholem Asch’s _God of Vengeance_, a drama written at the turn of the 20th century that deals with forbidden love, rebellion, and religion. It had its first run on Broadway in 1923 but only lasted six weeks before it was shut down and the cast and creative team were convicted of charges of obscenity. (Was it the lesbian scene, the Jewish prostitutes, or the Torah being thrown across the stage that was the final blow?)

_Indecent_ is a play about immigrants, homophobia, censorship, the capacity of art, and the power of love. When the two female heroines kissed in the rain, I held my breath. When they ran through the aisles — an escape from a concentration camp — I gripped my seat. And when they lined up at Ellis Island — foreigners in a new land, terrified and exhausted — tears streamed down my face. I cried for the thousands of refugees who are stranded today, and I cried for the long line of immigrants in my own family. _Indecent_ is a play about the past, but in many ways, it’s a play about today. When the show ended, I could barely move.

Paula is prolific in the theater world. Her acclaimed feminist drama _How I Learned to Drive_ earned her a Pulitzer Prize in 1998, and she is a renowned teacher and mentor, having led the playwriting program at Brown University and then at the Yale School of Drama. Some of today’s best playwrights have come under her tutelage, including four Pulitzer Prize winners. _Indecent_ might be her first play on Broadway, but her influence has long been felt in the industry.

I was a little nervous to interview her, but she couldn’t have been more welcoming. As we sat down in the lobby of a theater on 42nd Street, I noticed that her white, safari-style shirt had tiny colorful parrots on it, which made me want to hug her immediately. I didn’t. But I leaned in closer as the conversation progressed beyond my original questions — and expectations — to talk of prodigal daughters and the myth of angry feminism. Our discussion was candid, eye-opening, and it reaffirmed my belief in living one’s life passionately.

**Olivia Clement** : Tell me about discovering _God of Vengeance_ and why it changed your life.

**Paula Vogel** : I was 22 years old. It was my first year at Cornell University, and I’d just come out. My professor, who became an incredible mentor to me, looked at me and said: “There’s a play I need you to read: _God of Vengeance._” I’d never heard of it, but I ran to the library and found a copy. I started reading and I forgot to sit down. When I realized that I was going to see this love scene between these two women — I don’t remember breathing while it happened. I felt like I had stopped breathing. I still remember that physical sensation, and I’m 65 now.

**OC** : How important do you think it is that young people encounter positive or at least familiar representations of themselves — especially when they feel like outsiders?

**PV** : Extremely important. The truth is, everybody is an outsider. Everybody. So, we mustn’t fear presenting that in a work of art so that people have different ways of seeing their outsiderness reflected. This is what I say to young people: “It is not a waste of your life to be a writer, or to work in the arts.” I think the more we see ourselves represented, the more that opens up possibilities for younger people.

**OC** : Do you think there’s a fear of representing oneself as lesbian? Should we see more of it?

**PV** : I think that our culture comes and goes in waves of repression. I think that when there’s a political repression, there’s a sexual repression. Look at the counter-revolution that took the openness and “outsiderness” of the roaring ’20s and put a damper on it. I think it’s two steps forward and two steps back, and we have to stop ourselves, right now, from going all the way back.

**OC** : So we’re obviously in a moment of stepping back right now?

**PV** : We are, but that doesn’t mean that young twenty-something-year-olds are necessarily stepping backward. We can’t take progression for granted. The rising generation is always the next step forward, which makes me feel, even on the worst of days, somewhat optimistic.

**OC** : As someone who is also a teacher, how do you observe that in your students?

**PV** : One of the gifts that these younger writers have given me is a total acceptance of who I am. I may feel uneasy in my own peer group, but I don’t feel uneasy with younger people. It’s almost nostalgic to think of me as a lesbian in a way. They don’t even blink.

**OC** : _Indecent_ is a love letter to the arts in a lot of ways. Do you believe that doing what you love can sustain you?

**PV** : Yes. Look, I’m not a rich woman. I’ve struggled my way up to the middle class, and I’m very happy. I’m very lucky, and one of the reasons I got to the middle class is the privilege of whiteness. But I have to say that for every dollar I make from a royalty check, I have more pleasure, more joy, and more excitement than I would get were I a banker — which is a fine job, it just doesn’t interest me. A lot of us do jobs that don’t excite us because we think we have to. The truth is, if you have the skills to make it in the arts, you can make it in other media, like TV— there are many other things you can do with that skill set, and all of them are exciting.

**PV** : I’ve never worked a day in my life. I’ve never been bored. I know that makes me sound … I feel that we’re in a culture that is at times, and particularly of late, very cynical. But you can’t create from cynicism alone. Or I certainly can’t work with younger artists from a cynical point of view.

> The only way that we can change is to not censor ourselves.

**OC** : Is cynicism a trend that you see in younger artists?

**PV** : I actually see that there’s been a sea change — that younger artists are less cynical and that there’s a kind of postmodern coolness. Whereas middle-aged artists are fearful of showing genuine emotion.

**PV** : I would love for every American who is supporting these nationalistic proposals to do one of two things: One, go to Ellis Island and walk through the Great Hall. And two, go to the Tenement Museum in New York City. Take those trips and become aware of how critical it is to have immigrants in this country. It is the only thing that will keep this country vibrant, productive, creative, and competitive. We’re all children of immigrants.

**OC** : _Indecent_ has a strong political message, but I came away from it with these very powerful images of love. Was that intentional?

**PV** : I hope that in the last moments of my life, as I’m slipping away from consciousness, the last image that I see is either people I’ve loved or moments that I’ve loved in the theater. I hope that we’re given that last moment of beauty. I feel that we’re in a society where often our worth is defined by how much money we make rather than the value of how much beauty we see.

**PV** : I see myself in the play as the character of the young Sholem Asch, the playwright who wrote _God of Vengeance_ — I remember how hard it was for me to win acceptance and be staged, and the way I was called an “angry young woman.” I think all playwrights should be angry in their twenties. Why would we write if we didn’t have something that needed attention paid to?

**OC** : I feel like women are still being called out for being angry. What advice would you give to young women coming up against that?

**PV** : I have spent 30 years of my life mentoring people, and to me, when you’re angry, it’s because you want justice. I think anger is very valid as an impetus to write. We do not yet have a cultural model of women as prodigal daughters, but to be a prodigal son is a very romantic mythology … We have a lot of angry young men, and we see that that anger is coming from love for wanting the world to be better, and we embrace that.

**PV** : The only way that we can change is to not censor ourselves. If you’re angry, don’t hold back. Put it out there. It’s going to make it easier for the next generation. But if we self-censor, we’ve already given up.

**OC** : That’s something I’ve learned with age. Now, I’m more likely to make my opinions known regardless of whether they’re disruptive.

**PV** : I’m constantly having these conversations, particularly with older men, where when they meet me for the first time, they go: _Oh, you’re nothing like I thought,_ and I say, _You mean I’m funny?_ I think that there’s a myth that lesbians become lesbians because they fear or hate men, which has always been the most astonishing myth to me. Yes, I still continue to be angry, but I don’t see myself as an angry person. I think that we’ve created a myth of feminism that involves anger versus involving love — a love to make things different for the next generation. We’re still holding on to these myths of gender and anger that are very old.

**OC** : I think that part of the problem is this need to categorize in the first place. It doesn’t serve everyone.

**PV** : If we say, “Look at this love scene in _God of Vengeance,_ which was written in 1906,” maybe we will see that our great-grandparents didn’t fit whatever prescription we had of them, and that, in turn, can hopefully unsettle our own prescriptions.

**OC:** How does teaching and mentoring unsettle your own ideas about the world?

**PV** : I get my world turned upside down. Constantly. I have to face my assumptions and rip them up. I learn something every week that makes me spin.

**OC** : How do you feel when you see other people who you’ve mentored succeed in their own ways?

**PV** : I enjoyed and appreciated getting the Pulitzer. I’ve now been able to scream and jump up and down thanks to four writers I’ve worked with getting a Pulitzer. I want to see these writers I love on Broadway. I don’t want to be one of only several thousand people carrying around this amazing secret.

**OC** : That’s encouraging to hear, because the arts can feel very competitive at times.

**PV** : The capitalist model is the worst model in the world for the arts. This idea of the less supply, the more demand, that’s not true of the arts. More is better. The more theater I see, the more my chances are of becoming brilliant. It’s not “I’m the best in the world, and I want my competitors dead.” I want them to be brilliant so that I can try and catch up with them.

_Olivia Clement is a playwright and writer based in New York._