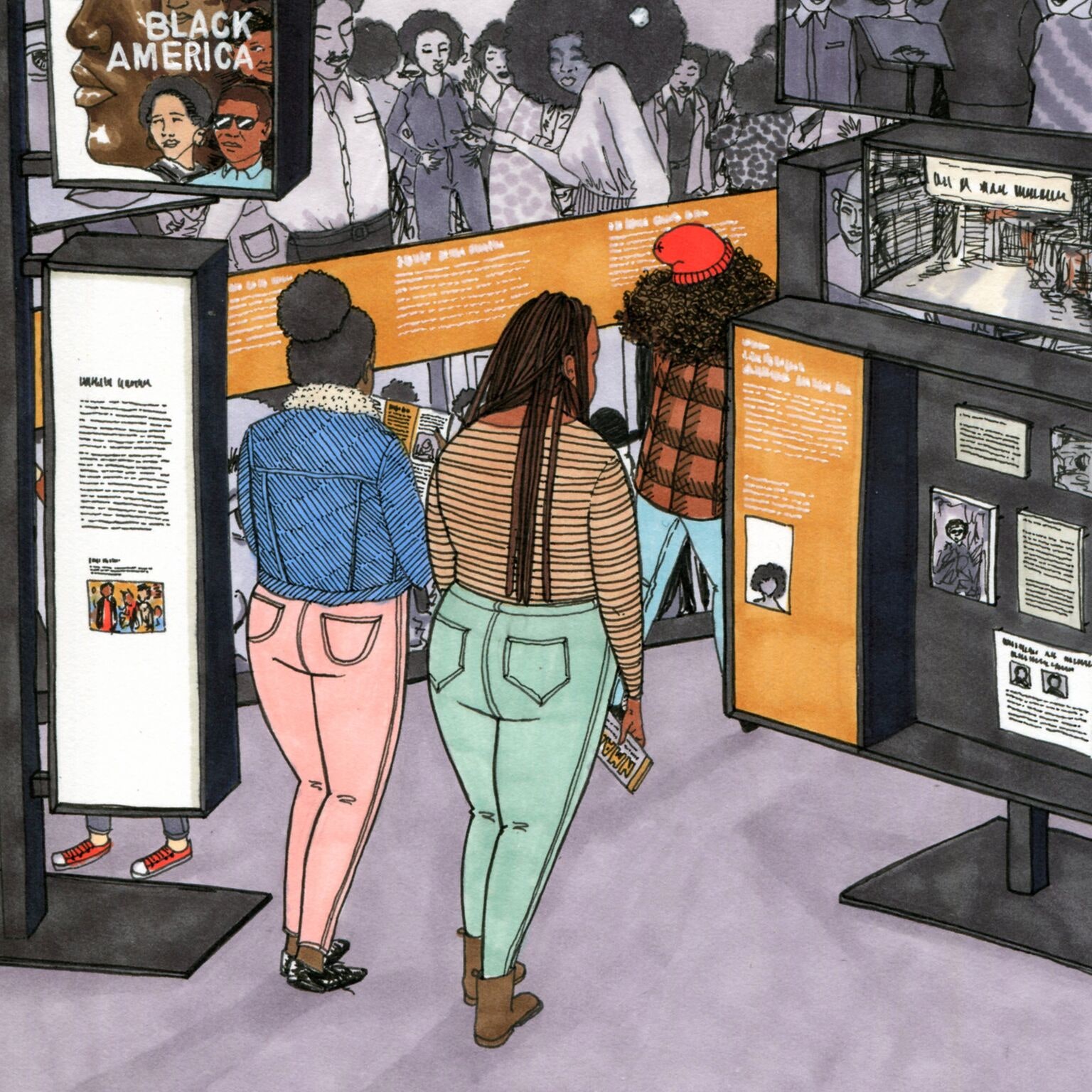 Every morning since the election, I wake up and ask my partner the same question.

“No,” he says. “We’re not leaving. My family started this country. I’m not going anywhere. Especially not now. This is when we stay and fight.”

Half of my partner’s family is old-school New York. Genuine Knickerbockers. One of the (1). His last name is on boulevards in Brooklyn, plastered across subway stations. When we were first dating, knowing I was a history nerd, he wooed me with tales of family glory—a great-uncle who served as a doctor to a Roosevelt; ancestors who were Union generals in the Civil War; a relative who founded the Girl Scouts. He can safely say that his family has been on the side of all the things that make America great. “But we don’t talk about the side that supported the Confederacy,” he smirks.

My partner’s inheritance is that certainty of belonging. Mine is that of figuring out how best to steal away.

My great-grandfather Matthew Trimking belonged to a tribe of Native Americans who welcomed the few Africans who managed to escape the living death of Low Country slavery for maroonage in the North Carolina swamps. The tribe was so mixed up with black, its members weren’t considered true Natives for a long time. Matthew Trimking tried to start a school for his people in North Carolina, which his white neighbors promptly burned to the ground. So he fled up North, to New Hampshire, to school at Dartmouth College, where the handful of other black students there refused to socialize with him because he was too little, too dark, too strange.

This last detail I know because of my aforementioned history nerdishness. There is my great-grandfather, in the letters of one of the few black Brahmins, filed and tucked away in an index written by one of the first historians of the black upper classes.

Even before I knew this about my great-grandfather, I was always curious about the past’s left-behinds. When I was in high school, I used to spend hours in my bedroom, lying on my bed, lamenting my own shiftlessness. I had been raised on the gospel of denial and sacrifice and bittersweet irony and last-minute tragic reversals: that is, on the gospel of American blackness. I was well aware that my grandparents and great-grandparents had scrubbed floors until their knuckles bled and spent hours minding other women’s children so that I could, at fifteen, lie on that futon mattress for hours on end, contemplating my place in space and time and counting up what I owed the past.

I have been to the Smithsonian’s (2) twice now. The first time was at the end of October, right before the election, with my sister Kerri. She actually did become a historian — a really great one. She was the one who got me my first job at a black-history site, the Black Heritage Trail in Boston. We were park rangers together. We spent summers sweating in Smokey-the-Bear-style ranger hats, making tourists uneasy by brightly asking, “Are you interested in a walking tour about Boston’s black abolitionists?”

> My partner’s inheritance is that certainty of belonging. Mine is that of figuring out how best to steal away.

When my sister and I walked through the door of the Smithsonian’s African American history museum, it was an explosion of blackness, of Us-ness, that made us both giddy. From the avuncular security guard who claimed we weren’t on the admission list but shrugged and said “Don’t worry about it, pretty girls” to the man in an Obama for President hat who told us about moving from a town near Tupelo, Mississippi, to Gary, Indiana, in the ’60s and riding in the back of a bus as a child. His T-shirt read “Triple the Hustle and Double the Heart.”

During that initial visit to the museum, my sister and I made it through only the first three floors. The museum begins in the basement, at the start of black identity, with the transatlantic slave trade beginning in the 1400s. As you walk through it, the floor slowly elevates, until you are climbing up and out through history, all the way to 2008 and the election of Barack Obama, and then the “present.”

We passed numerous parents with small children, winding their way through the dark and cramped corridors. I watched as a girl, her scalp crisscrossed with cornrows, smiled at her own reflection in a display case, patting at her edges.

In one corner, sanctioned off, you could walk through a room containing Emmet Till’s casket. This was the one space my sister and I could not bring ourselves to enter. “I can’t,” she said. “Not today.”

But mostly, we were overwhelmed by the fact that this space existed. That it was really here, and full of all of us, all the pieces of us collected and set off for proud display.

We went to the second floor, to look through one of the gaps in the façade, out to the National Mall and the Washington Monument. Out of the corner of my eye, I caught the sight of a tour bus circling the museum. It was Milo Yiannopoulos’s bus, “AMERICAN FAGGOT” sprawled across the side. At the time, I told myself to ignore it. “Don’t let them ruin this moment.” But it was still there, circling, when we went to grab our coats.

Since the election, among all the other terror, I’ve been worried that this museum would be the first to be on the Republicans’ chopping block. When I went back for my second visit, on the second day of February, Donald Trump had just (3). “Did you hear?” my friend Sara asked me. She had been kind enough to get me a second ticket to the place, and we were walking through it together.

“No. Black History Month is a sacred space for me, and I prefer not to indulge any white nonsense during this time,” I said, only half-joking. I’d been on edge because a few weeks before, the White House had issued an ominous announcement that Trump had “plans to celebrate Black History Month,” and so I had braced myself for what I was sure was going to be some high-level trolling, which is apparently how we’ve decided we’re conducting politics for the foreseeable future.

“You know,” Sara persisted, “Trump says he thinks this museum is terrific,” and as I walked to the top floors of the place, I could see why. I’d missed this part on my first visit. This is absolutely not shade to the museum—but the top floors are all large flashing screens and glass boxes full of the greatest hits of black entertainment. On the third floor, the first place you enter is an oval reception space, with screens mounted on the curved wall. Impressionistic films about different aspects of black culture — writers, faith, hair — play. The final video is on black hand gestures — just a quick edit of different people slapping palms, doing the Dougie, clapping hands. The final shot is Obama doing his famous “Obama Out” mic drop from the last White House Correspondents’ Dinner, which, honestly, is kind of the pinnacle of black American history so far and I think could probably just play on loop in this place and the work would be done here. Every black entertainer and artist you could think of, and some you may have forgotten, seems to make an appearance on those screens, smiling, in their prime.

It’s no wonder that Trump would like it up there. It’s all success, and joy and triumph, all the time.

We got to the museum late in the day, and we had to leave before we could see all the things we wanted to. A security guard told us it would probably take visiting for six weeks straight to see everything. As we walked out of the museum, we stopped and took pictures in the fading sunlight.

Sara and I went to college together. Back then, we would try to come up with adventures to take, but they never worked out — one of us would flake out on logistics. The one trip we managed to pull off in spite of ourselves was a visit to Atlanta to see the nonagenarian jazz singer Little Jimmy Scott in 2004. Little Jimmy Scott’s voice is a pure falsetto, unbroken. No one is sure how he was able to sing that high as a 90-year-old man, but he was. We saw him in the dust, under trees, and waited outside his trailer door to tell him how much his voice meant to us.

We’d flown to Atlanta separately, but on the way home, we went to the airport together. In the ticket line, Sara suddenly turned to me. “They’re going to take me out of the security line and search me. They always do,” she said. Sara’s father is an immigrant from an East African country and this was Bush-era America, so my friend’s last name was on a list. “They’re going to ask you if you’re traveling with me. Just say no.”

> “Black History Month is a sacred space for me, and I prefer not to indulge any white nonsense during this time,” I said, only half-joking.

But in the blustering blitheness of an American, I ignored her. They couldn’t possibly search _me,_ I thought. The TSA agent turned to me. “Are you traveling with this woman?” “Yes!” I said, and I was promptly pulled out of line as well. I found my name on security lists for the next three years whenever I tried to fly.

I think about that moment, as we pose for photos in front of the museum. Of the strangeness of American blackness: a position that makes it seem as if this country isn’t really mine, but still a place I instinctively claim, an arrogance I am willing to inhabit sometimes. It’s the country where white people burned my great-grandfather’s ambition to the ground one year, accepted him into a college that is a seat of financial and cultural power the next, and then classified him as a “popcorn seller,” not an English professor, in the federal Census a few years after that. The best thing about this museum is that it doesn’t try to solve this riddle. Instead, it lets it unfold in all its color and complexity, its contradictions and beauty big enough for you to walk through.

_Kaitlyn Greenidge is a contributing writer for Lenny Letter and the author of the novel_ (4).