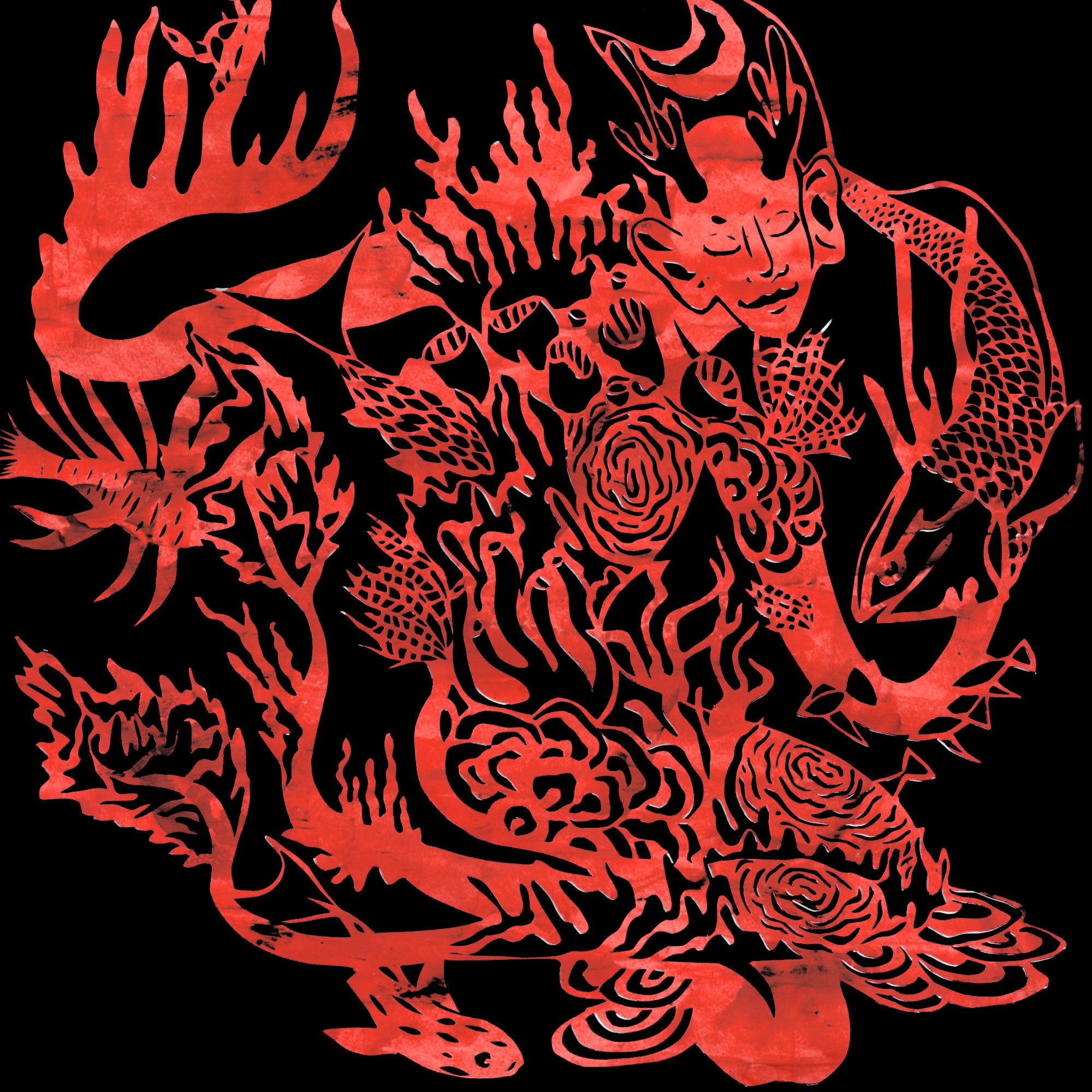 On an early afternoon in late September, I step out onto the beach in Puerto Morelos, Mexico, to what I can only describe as a glimpse into a dystopian vacation.

The beach reeks of rotten eggs and sewage, the smell leaking onto the recreational areas of the beachfront resort; it’s an unforgettable stench due to — I later learn — the massive amounts of sargassum washing ashore on the Caribbean coast. The usually pristine, clear seawater is murky as a result. The shoreline and its idyllic white sand are covered with it, a brown algae turned black and smelly when decomposed, making a swim out to the ocean impossible without a boat ride or a discomforting barefoot trek through the piles and piles of sargassum. Yet the tourists — some in town for weddings, others for bachelor and bachelorette parties, and others just to relax — are sipping on margaritas, floating in the pool, and lounging on beach chairs looking out to the ocean in the midst of what seems to be, unbeknownst to them, an environmental crisis.

For a glimpse at the realities of where the damage is most rampant, I spend a day with Dr. Anastazia Banaszak, a research professor at the Universidad Nacional Autónoma de México (UNAM) in the Reef Systems Academic Unit. For the past twelve years, alongside her team and postgrad students, she has been working with inarguably the most important species to the health of the ocean: coral and coral reefs. Banaszak and her team are studying coral’s habits, building a seed bank, and learning to reproduce it in preparation for disastrous conditions, which we seem to be getting closer and closer to every year, fighting against time.

Since 2011, there have been reports, linked to warmer temperatures and pollution, of increases in sargassum blooms on the Caribbean coasts, with 2015 being one of the worst years. Now 2018 is setting a record high; the sargassum season typically starts in June and ends in September, but this year it started in February, and Banaszak tells me she thinks it will last until November.

It’s not that the algae is bad or unnatural; in usual conditions, bits of sargassum floating in the ocean provide shelter for seahorses, crabs, and other small fish, and a resting place for baby sea turtles making their way out to the ocean for the first time. But the massive amount of it is creating ripple effects for the environment and the community that inhabits it. (3), with some hotels livestreaming the removal to reassure tourists.)

A healthy coral reef means white sand, less damage during natural disasters, and a thriving ecosystem. It’s the reason why there is even such thing as “the perfect beach getaway.” Quintana Roo’s economy is 90 percent dependent on tourism, or what you would call a “sun and sand” economy, which (4) as of August. If tourists stop visiting hotels and restaurants, locals in the community won’t have jobs, and fishermen won’t have places to sell what they catch.

In the ocean, conditions are devolving exponentially. Some species of coral have (5) that causes them to die in rapid time. Banaszak and other researchers haven’t yet been able to pinpoint a cure or a cause, but signs point to the increase in sargassum. (Researchers are also worried that the disease could spread to fish.)

This new coral disease adds to the ongoing damage already done — the 80 percent decline in coral across the Caribbean from overfishing, excess pollution, global warming (which causes coral bleaching), and an increase of hurricanes, which makes it hard for coral and the animals that depend on it to recover. It’s not that coral hasn’t been in dire conditions before (“They’ve gone through worse periods in the past,” Banaszak says), it’s that it’s not recovering in the same way, owing to all these external forces. In light of this, Mexico, which is part of MesoAmericano, the second-largest coral-reef system, created (6), which essentially ensures immediate restoration of the reef and, as a result, the land, as it creates a line of defense against hurricanes.

It’s a busy day at the Reef Systems Academic Unit, right on the coast of Puerto Morelos and hidden from the tourist-filled resorts and hotels. Banaszak greets me in a T-shirt that reads “Keep Calm and Reproduce Corals,” fitting for a woman who has been studying coral for the past twenty years. Born in Australia, she learned to scuba dive when she was fifteen. Reminiscing, she tells me that her ultimate wish is to take coral reefs back to the way they looked on her first dive, over 30 years ago: vibrant, healthy, and, most importantly, alive.

In 2011, Banaszak started working on coral-reef production, a job that, as she explains it, sounds like a hybrid of fertility specialist and matchmaker. In the summer months, when the coral is spawning, Banaszak and her team go out at night to collect coral eggs and sperm for fertilization in the lab. So far, they have nine different collection sites across the Caribbean Sea. In 2015, Banaszak and her UNAM team got funding from the Mexican government for a project to start coral reproduction using in-vitro fertilization (IVF) — yes, the same procedure women all over the world use to get pregnant — in collaboration with (7). The method was successful for sperm from elkhorn and staghorn coral, while other species failed to fertilize after they were frozen. The biggest challenge comes in raising the coral until they are ready to be planted on reefs, as the mortality rate is fairly high. The project ended this spring, and Banaszak and her team are busy working on other reproduction methods while awaiting more funding.

“I still have that vision of reefs the way they were, and when I see them the way they are now, it shouldn’t be like this. It’s what drives me to try to keep going,” Banaszak says. “Even under situations where other people are saying, ‘You know, you’ve got to take care of this and that and the other.’ I’m like, ‘Yes, that’s true. Let somebody take care of it, and in the meantime I want to try to research how to make them better.’ If we don’t have these techniques, we won’t be able to reproduce .”

Mary Hagedorn, a marine biologist with the Smithsonian Conservation Biology Institute, pioneered the IVF method of coral restoration, and taught her technique to Banaszak and her team at UNAM. Hagedorn worked on cryopreserving fish embryos until 2004, when she saw the dire state of coral and their reefs and wanted to try the same method on them. Instead of freezing eggs, like in IVF for humans, Hagedorn freezes coral sperm, creating a sperm bank. Back in 2012, (1) that she had frozen around one trillion sperm, “enough to fertilize 500 million to one billion eggs.”

“If we lose our coral reefs, it will be the first ecosystem that we have lost while man is alive,” Hagedorn (2). “It will be on our watch, and most of it due to us. I don’t think that is acceptable.”

Banaszak has been using this technique since 2015, explaining to me that a coral sperm bank is similar to techniques used in Norway and Iceland, which have seed banks of all their trees and plants in case of a disaster. She and her team, along with Hagedorn and other scientists around the world, are doing the same thing with coral sperm so that in the next ten, 50, or 100 years, there is some type of security for the ocean. The next big step is finding the right environment in which to freeze and reproduce eggs (they’ve successfully frozen them, but those eggs were no longer viable for fertilization) and, eventually, to freeze embryos (the fertilized coral sperm and egg). This summer, Banaszak and her team froze sperm, which is usually only viable for a couple of hours, on site in their boat instead of waiting to travel back to the lab, making it possible to collect sperm in remote locations.

Normally, coral is able to reproduce on its own, but with the current state of coral reefs and their rapid decline, artificial reproduction provides some assistance and the possibility to use the DNA to make different combinations of species with both fresh and frozen sperm. The idea is to produce new coral genotypes and let nature select the ones that are most resistant (to diseases, warmer temperatures, and natural disasters) instead of creating some sort of “super coral.” “We’ve got way too many examples in agriculture of where you select for disease resistance, and then it turns out that it’s susceptible to temperature change, or something like that. There’s enough examples to make me worry that if we do this in corals, we’re not doing them any favors,” Banaszak says.

It’s 9:30 p.m., and Sandra Mendoza Quiroz, a marine biologist and Banaszak’s right hand, takes me out for a snorkel to see the coral spawn, which only happens on certain summer nights, usually during a full moon. Tonight isn’t one of those nights, so I don’t see it. But I do see some crabs, a baby octopus, live coral, and, unfortunately, coral that is dying and covered with algae from the new disease.

Born in Oaxaca, Mexico, Quiroz had her first encounter with the ocean when she was twelve, on a family trip to Puerto Escondido, where she found shells and saw animals on the shoreline, which made her wonder what lived under the sea. For the past ten years she has been working with Banaszak, first as a student and now as a reef-restoration technician. While we were snorkeling you could tell who was actually comfortable in the water, and it wasn’t me — I used a life buoy.

We swam out over 100 meters once jumping off the boat, and Quiroz was calm, cool, and collected. In the summer, she spends her nights either snorkeling or scuba diving to collect sperm and eggs to take back to the lab, meaning she often ends her workday around midnight.

At 10:40 p.m., we make our way back to land. All the hotels are quiet and the beachfronts are empty, yet Quiroz and other UNAM researchers are out planning for the future of our oceans. There’s a sense of hope, as their methods so far have been working. They’ve already reproduced and planted coral grown from their lab across the Caribbean, with six- and seven-year-old ones on a reef damaged by a shipwreck, and two- and three-year-old ones on a reef that has degraded.) But there’s still a sense of concern — scientists say that the oceans won’t have coral reefs by 2050.

“Without hesitation, there must be a global change in which we live friendly with the environment and try to restore what has been damaged,” Quiroz says. “I just hope that it is done in time so as not to extinguish them.”

While Banaszak has hope for coral’s future, her outlook isn’t so positive when talking about humans, their effect on the environment, and the urgent need for change, mentioning “excess” as a main culprit. Earlier in the day, Banaszak showed me some photos of tourists around the Caribbean coast who have carved their names into live coral. Therein lies the disconnect: coral are living things, but most humans see them as mere rocks. Banaszak thinks we need to bring coral reefs to people through environmental education, school curricula, and documentaries, like *Chasing Coral* (“It’s like bringing the reefs into their home; they can just turn on the TV”).

Quiroz wants people to get back to the Mexican saying *“En el mar, la vida es más sabrosa.”* It means “In the sea, life is more tasty.” And it starts by renewing our relationship with the ocean and all of its ecosystems, including coral reef. It’s not just something beautiful to look at, but a living thing with which we coexist.

*Tahirah Hairston still can’t believe she went snorkeling in the middle of the night (and didn’t die!).*