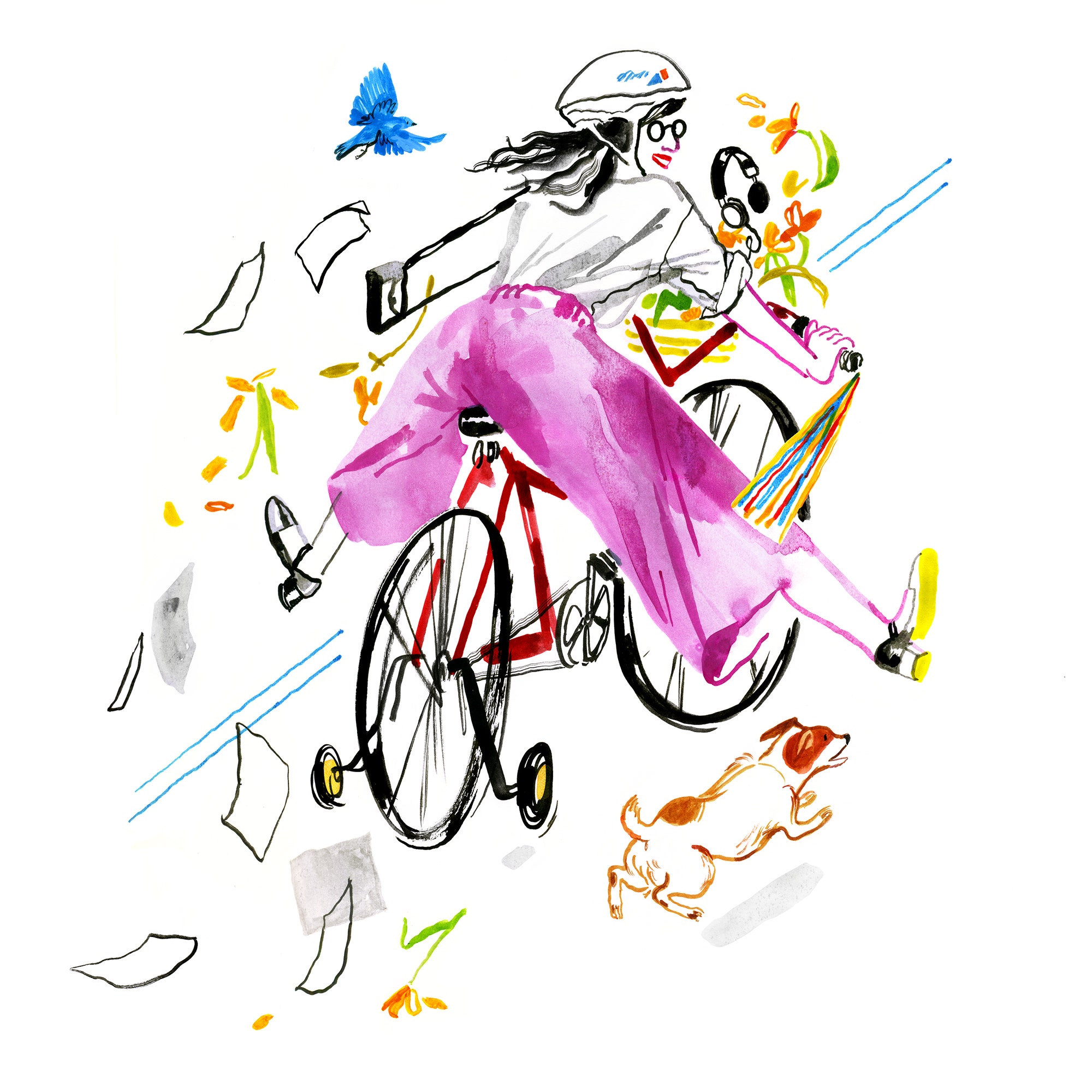 ​I realize that leaving a job you love and do well can be construed as an act of pointless rebellion, like wearing flip-flops to a wedding or smoking in an airplane bathroom. Who are you making uncomfortable but yourself? But last year, I did exactly that. I’d been a working writer for 20 years. Hundreds of bylines plus two books easily gets me my 10,000 hours of practice. I had achieved mastery, (3). And then, I gave it up. I dropped back to zero.

The person to blame is my friend Alix, who hosts the NPR show *Invisibilia*. One night late last summer, we went to see a movie together. Afterward, I mentioned a crazy experiment involving an oil rig where they trained the big men to cry and share their feelings and basically behave more like women. Alix said it would be perfect for one of her shows. Then she said: “Leave your job and come work with me.”

The movie we’d just seen was *Straight Outta Compton*. For a moment, standing by the inky, moonlit Potomac, I thought, *If Cube and Dre, why not us?* I had loved the first season of *Invisibilia*. And maybe I was restless and needed something new to do. Whatever it was, pretty soon I had an NPR badge and was present at “listening sessions” critiquing radio stories and pretending I knew what to say.

> For a moment, standing by the inky, moonlit Potomac, I thought, If Cube and Dre, why not us?

In his new book * (1)*, about learning to play serious tennis in his 60s, former *New York Times Magazine* editor Gerald Marzorati asks: “When is the last time you improved at anything?” Let me reframe that for my purposes as: “When is the last time you sucked at something you had to finish on deadline?” When I started, my grasp of basic radio skills was weaker than the average NPR intern’s. True, I couldn’t hold a microphone properly, but I also didn’t know how to write a script, or record narration, or choose music, or pretty much any necessary thing.

Early on, we all sat in a room listening to a taped interview about an old lady and a lion. When the lady said certain things, my colleagues would all light up and write stuff down. It seemed little to do with the content of her words — I had no idea what they were hearing. Sometimes I’d ask the closest person for help, and they would laugh nervously. I think this is because by your 40s, you’re supposed to know things. But what else could I do?

Giving up mastery involves a series of humiliations, some of which hit you when you think you’re on solid ground. For my first reporting trip, Alix and I went out together to interview some oil men. She showed me how to hold a mic, and I took it from there. I know how to extract information from people. I’ve been doing it for years. We sat down with a guy who’d worked on the rig. I got the guy to talk and talk and tell us some of the outrageous things the men had done on the job (teaser: foot massages). For me it was a proof-positive interview, the kind that confirms that yes, the story is true. As soon as we got into the rental car, I turned to Alix so we could squeal in mutual victory. “Well,” I asked, “how’d I do in my first interview?” “Honestly,” she said, “B-.”

> Giving up mastery involves a series of humiliations, some of which hit you when you think you’re on solid ground.

Worse than losing competence is losing the ability to even tell if you are competent or not. If you give me a draft of a magazine story, I’m pretty sure I can tell you what’s wrong with it — if it’s too long or too short or underreported or overwritten or if the third paragraph needs to be switched with the 17th. But with radio, my judgment was off. I’d feel delighted with an interview or a draft and then look over and see Alix with her head in her hands. Perhaps I should have been sympathetic, but instead I was cranky and defensive. When Alix said that about the interview with the oil guy, I had no idea what she meant. I told her she was crazy and then listened obsessively to the interview to figure out what was wrong.

When I was feeling especially incompetent, I tried to remind myself of what they say in the books: You will gain inner grit! (2)! Autopilot is death! And some evenings, as I was walking home from work, I could feel that these things were true. Every day I was exhausted, the way you are when you visit a foreign country. You don’t speak the language and everything takes too much time and the people don’t act the way you expect them to and you are functionally a child. But the days go by fast, because novelty is a kind of drug.

I learned a ton of new things about myself, in the way you can only do if you are fucking up daily. I learned that I am defensive but trainable. That I have capacity for patience but that my immediate default is speed, bluntness, and ironic distance. That although I am used to working alone, I will happily collaborate. And that I really like working with women, even if they cry more during the day.

> I learned a ton of new things about myself, in the way you can only do if you are fucking up daily.

And I remembered a really nice thing: how to be goofily, absurdly proud of myself for figuring something out, a kind of pride I usually reserve for my children. This is the best part of dropping back to zero. The list of things you have to master is endless. And when you get one right — even a little, tiny one — everyone notices and gives you an adult version of an extra candy in your lunchbox. I got a lot of help. The people I work with taught me things the way you teach a kid to ride a bicycle — they were right on top of me, day after day. Still, nine months later I listen to the shows we produced and I can completely recognize them as my own.

Alix likes to say she gave me a mountain to climb, and that’s true. I get bored easily, and she probably saw a crisis coming and saved me from it. For that I am grateful. But that way of thinking makes me tired. Who wants to spend 10,000 more hours climbing *another* mountain? Instead I like to focus on another gift Alix gave me, which became clear to me once I’d figured out why I got the B-. Turns out that despite two decades of interviewing people, I’m not as good as I thought I was.

I’ve been told more than once that I have a machine-gun style of conversation. I do it in work interviews, but also with friends, and strangers at parties: Where did you grow up? Who is your mother? Do you like her? So, hate? Why are you cutting up your meat like that, in small bits? A therapist I saw, who was a beautiful Jungian witch, suggested that perhaps this drilling was my way of preventing any real confessional moments from slipping in. I didn’t believe her, until I watched Alix interview people.

In radio, information is not your goal. Someone can talk and talk and talk, but unless they talk in the right way the tape is useless to you. If they are distracted, or overly theatrical, it won’t work. (That was the problem with the first oil guy we interviewed: he was always putting on a show.) The aim is to get them to relive all the emotions they felt at the time, which will translate in their voice. This can be achieved only if you are patient and open, and take the time to establish a real connection.

> This can be achieved only if you are patient and open, and take the time to establish a real connection.

I made fun of Alix for how slowly she talked in interviews, how she would stretch out the word “eee-mooo-shun-a-lll-eeee” until it had 24 syllables. But secretly I studied her methods. She sat very close to people. She cocked her head when she listened. She made herself inarticulate and vulnerable and told stories about herself that were models for how she wanted stories to be told. It looked like an imitation of a slightly inappropriate life coach, but it was magical. When she started to talk, she changed the air in the room. People were present, and their words became little freight cars of feeling.

After nine months, I learned to talk to people differently, at work and in life. I try not to jackhammer questions. I try not to give off the air that I need to get somewhere else. (An hour into a recent slow, meandering conversation, my friend asked if I’d taken Tylenol PM by mistake.) I try not to clock my hours, because screw mastery. Not knowing is its own kind of perverse pleasure.

Recently Alix and I did another interview together. I sat down very close to the guy (which was weird, because he was distractingly good-looking). I cocked my head. I spoke slowly. I had ten pages of questions to ask him that I needed to get through, but I didn’t let that speed up the clock. After an hour I looked over at Alix in the corner, and she had a tear in her eye like the little Jewish mother she is, because she was proud of me. She squeezed my knee under the table, relieved that she would not have to spend the rest of her days trailing me around and could finally work on her own stories. And then we both looked down and noticed the cute technical glitch: I had forgotten to press record.

*Hanna Rosin is a co-host of the NPR show* Invisibilia.