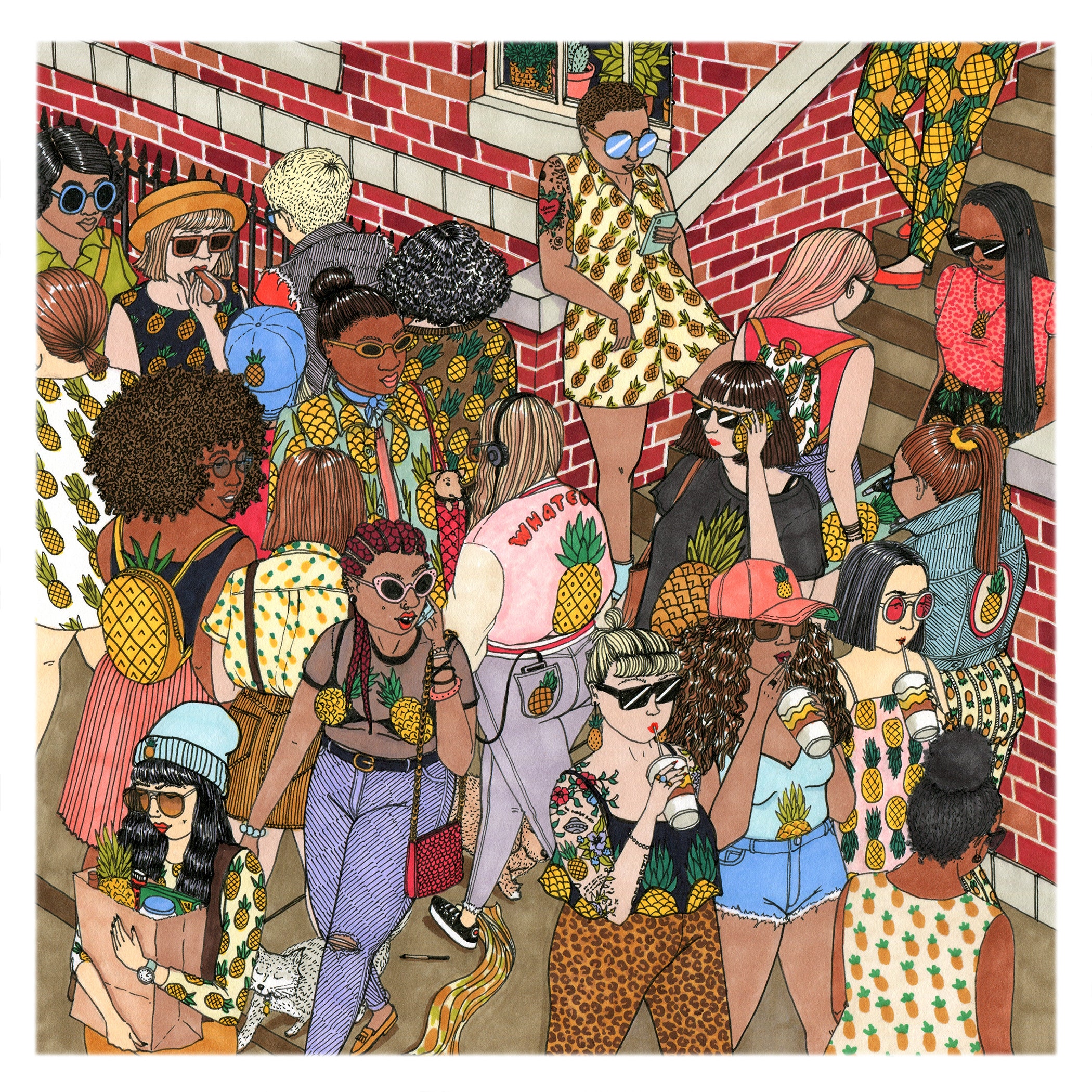 Without realizing it, you are surrounded. Everywhere you look, there they are. Look down, there’s probably one on your body right now.

I am talking about pineapples, of course, which in the past couple of years have become the de facto decoration. Embroidered into jeans, woven into silk blouses, turned into tiny handbags, printed onto wallpaper, emblazoned on cell-phone cases: there is no object in our world that is safe from this tropical fruit. Much like the peace signs and smiley faces of the ’70s, the daisies of the ’90s, and how we “put a bird on it” in the mid-aughts, the pineapple has emerged as the icon that will represent *the times we live in now*.

But where did it all start?

Historically, the pineapple started out as a status symbol, as it was one of the fruits Christopher Columbus and other European explorers were bringing back from the Americas. It took a couple hundred years for the Europeans to learn how to grow the fruit — it was Barbara Palmer, mistress of King Charles II, who eventually started growing them in her “hot house” in the late-seventeenth century. Which is to say, having a pineapple in your home was a *big* deal. So much so that at the time, there was a rent-a-pineapple system, so multiple hostesses could take turns displaying the foreign fruit in their home. Throughout the years, as pineapples became more accessible, they no longer represented status and instead became symbols of hospitality.

Bring up the pineapple among a group of 21st-century fashion aficionados, however, and inevitably they will all mention Stella McCartney’s spring 2001 collection for the French label Chloé. The collection perfectly married Stella’s youthful, cheeky approach to the world of “high fashion,” as seen on halter maillots with pineapple prints strategically placed at the crotch.

The collection was iconic not only because of its instantly recognizable emblems, but because it cemented Stella’s status as a designer whose point of view mattered. Although she had been at the helm of the label since 1997, the fact that she was then 25 and fresh out of design school, and that she was taking over for the recently ousted Karl Lagerfeld, meant that there was a lot of skepticism over her appointment. (Karl famously said to *Women’s Wear Daily* back then,”I think they should have taken a big name. They did — but in music, not fashion. Let’s hope she is as gifted as her father.”) She would leave Chloé to start her namesake label a year after that.

> While we know that florals for spring are not actually groundbreaking, the springtime fruit print is like its cousin, coming out every year, hustling hard to be seen with various degrees of success.

Weirdly enough, Stella was not the only one in a pineapple state of mind that season. Yves Saint Laurent, who was still designing his couture label at the time, also sent out glamorous gowns embellished with pineapple prints on his runway for spring 2001.

It would be enough to blame the resurgence of this print on the recent bout of early ’00s nostalgia (see also the renewed popularity of Juicy Couture sweat suits, and Paris Hilton–Nicole Richie–*The Simple Life* nostalgia), but it’s a bit more obvious than that. You see, for spring 2013, Chloé released a special capsule collection featuring its “greatest hits” as part of its 60th-anniversary celebration. You can guess that the pineapple collection made the cut.

As the so-called fast-fashion stores continuously get their inspiration from the high-fashion runways, it’s no surprise that the pineapple made its way to the masses once again. In 2001, I definitely owned a white tee with a sequined pineapple on the front, and I’m sure it wouldn’t take me very long to find a similar style today. But I think there’s another reason why the pineapple is still so prevalent: After all, is it really possible that a collection from 2001, revived in 2013, could still have such an intense effect on the trends four years later?

While we know that florals for spring are not actually groundbreaking, the springtime fruit print is like its cousin, coming out every year, hustling hard to be seen with various degrees of success. And through various cultural factors, it is the pineapple that is still standing after the fast-moving periods of wokeness we have been going through of late.

Let me explain. You have bananas, but other than their short-lived success thanks to Gwen Stefani’s spelling lessons in 2004, they’ve never quite taken off as a print. Also because they are shorthand for penis. Then we have cherries, but they have a sort of “bad reputation” for a fruit, a classic flash-tattoo design favored by those with retro sensibilities. Also because they have become a stand-in for cooters, even though they don’t actually resemble them at all. Meanwhile, their bright-red relative the strawberry has cornered the little-girl market thanks to Strawberry Shortcake (which also means there’s a Lolita factor in there, but let’s not get into that, OK?).

So that leaves us with the pineapple.

The pineapple is the feminist fruit of our times. Stay with me here. Yes, you can playfully joke that a pineapple is a vag, but it isn’t a friendly vag! There are spikes to get around, cutting into them takes a bit of practice, and if you don’t know how to eat them right, the rind will fuck up the corner of your mouth (sorry, was that too much?).

The pineapple, which started out as a status symbol for colonizers, became a stand-in for comfort and hospitality. And then, after a young female designer turned it into the “I am woman, hear me roar” statement of her still-budding career, it’s now the primary motif of, dare I say it … the post-Trump era.

*Laia Garcia loves piña coladas (and getting caught in the rain).*