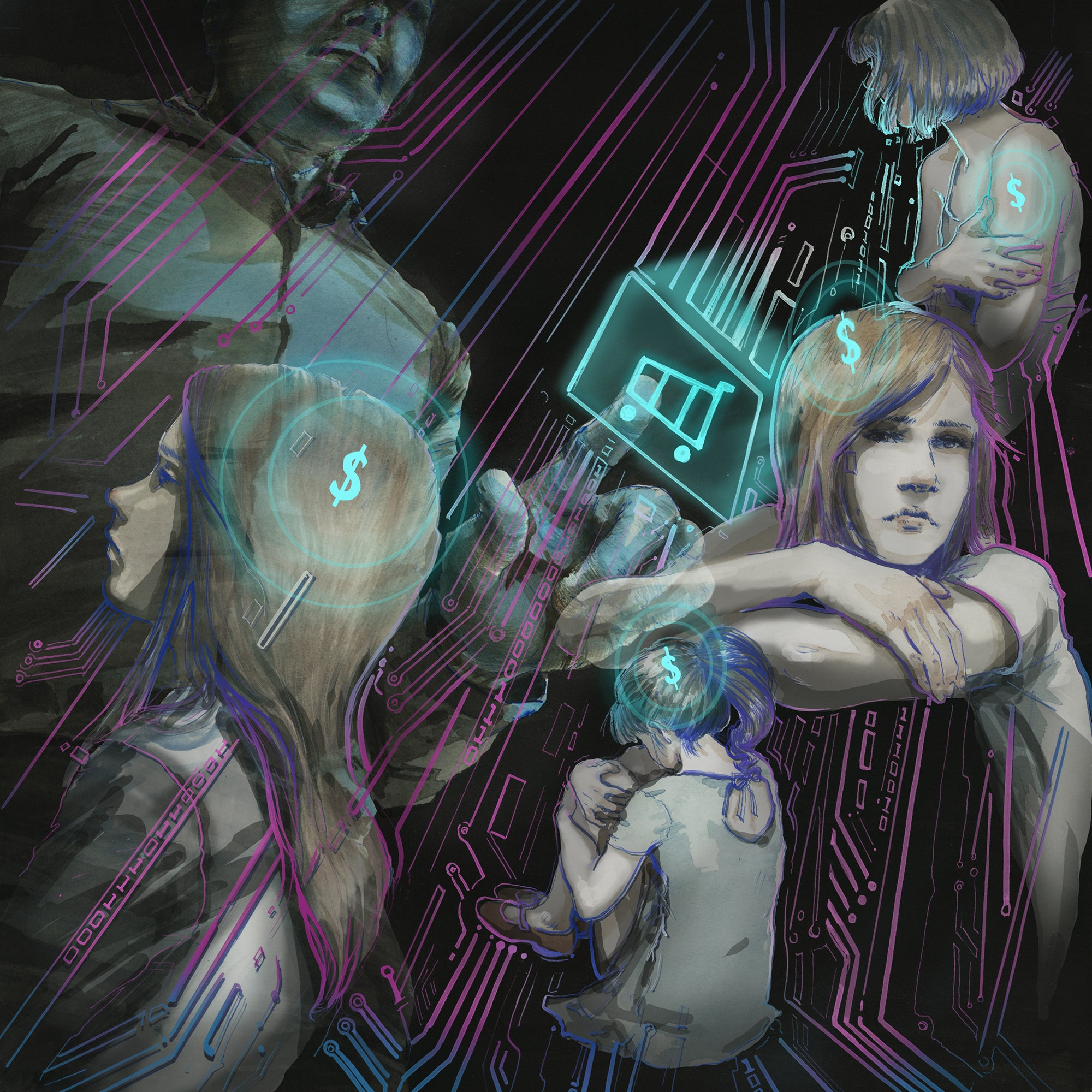 Claire*, like so many fourteen-year-old girls, loved going to the mall. One day, a vaguely handsome older man approached her there. “You’re beautiful. Such defined cheekbones. You could be a model, did you know that?” he said, with a disarming smile. “I’m Scratch. I’m a fashion photographer. Why don’t you stop by my studio tomorrow?” And like so many fourteen-year-old girls would, Claire beamed. She liked him instantly.

The next day, Claire arrived at Scratch’s and knocked on the door. Scratch opened the door and Claire entered, noticing that it was a small, cramped apartment. Not a studio. But before this could register, Scratch gave her some underwear. “We need some photos of your body.” Claire changed, feeling self-conscious. Scratch looked at her and began snapping a camera. “Bend over, pout, smile,” he instructed, moving so quickly that Claire didn’t quite know what to think. “OK, we got it!” Scratch shouted after about 30 minutes. “Get changed.”

Claire went into the bedroom to change and shut the door. The door then opened and Scratch said, “Let me help you,” and he began removing Claire’s clothing and pushing himself against her. Claire’s hair suddenly stood on end. She was terrified. No one had ever touched her this way.

Claire ran from the apartment as fast as she could. She was not certain what she would tell her new foster mother, Jane — she hadn’t been in Jane’s home for very long at all. But when Jane came home from work, Claire burst into tears. Jane immediately called the police. The officer arrived to hear Claire’s story, and he shook his head. “Do you know what these people do?” he asked Claire. “They take your photo, and then they advertise you for sex with men. On Backpage. This is the first step into The Life.”

When this case landed on our desk as prosecutors, we began the investigation by searching backpage.com for Scratch’s phone number. We immediately found several posts advertising very young-looking girls for sex. Scratch was a pimp, and he was trafficking children.

As prosecutors, we were trained on the recruitment and grooming techniques of pimps and traffickers — and how traffickers exploit the most vulnerable populations. Like Scratch, many pimps recruit their victims by telling young girls they are beautiful, that they can be models. These pimps then take their photos and post them online, usually without the child’s permission or knowledge. And in our experience, they all use the same website: backpage.com.

For those who are not aware, backpage.com is a classified advertising website (like Craigslist) previously owned by Village Voice Media. In the United States, Backpage is sometimes used to sell mundane things like couches and television sets, but about 80 percent of the company’s revenue is from sex ads — including ads of children. Pimps and traffickers pay for these ads by cash, check, and Bitcoin, which is an anonymous form of payment. The president of Backpage once even encouraged users to use Bitcoin to remain anonymous … and thus remain untraceable. The U.S. Senate found that selling a motorcycle on Backpage required more information and more steps than selling a child.

The traffickers are making hundreds of thousands of dollars a year off these young women. Another teenage girl who came to our office, Sheena, had been introduced to a man named Max at a family barbecue. Max began picking Sheena up from school every day, spending hour upon hour with her and asking her to be his girlfriend. Sheena began to see less of her family. Less of her friends. Max was demanding all her time. Sheena thought this was normal for people in love.

After about a month, Max brought Sheena to his house, where several girls and a few older guys lived. A house that was far away from Sheena’s home. Just like Scratch had done, Max gave Sheena sexy underwear to put on and began taking photos of her. Within the hour, Sheena was posted for sale on backpage.com. Max had taken Sheena’s phone away, and she had no way to contact anyone for help. That night and for several months after that, Max sold Sheena to strangers for commercial sex.

In the process of the prosecution of Max, Backpage records were turned over to us. Max had spent well over a thousand dollars on these advertisements, but it was just a drop in the bucket compared to the money he had made off her body. Max sold Sheena repeatedly, upwards of fifteen times per day; his annual salary from Sheena alone would have been $250,000. How much was Sheena allowed to keep? Nothing. She was, by definition, a slave.

This crime is escalating with the speed of technology. Between 2010 and 2015, reports of online sex trafficking increased by over 800 percent. Human trafficking is so profitable that it is fast overtaking both drug- and gun-running in terms of revenue. Technology has enabled this crime to move online — Backpage is, technologically, not that different from Seamless or Amazon — where it has mushroomed out of control. The guy who sits in the cubicle next to you at work, who generally wouldn’t have gone down to the “track” at night to find a girl to have sex with, now can order one with the swipe of his phone. Right after lunch.

In order to stop the proliferation of sex trafficking on the Internet, websites like Backpage need to be held accountable when they are not just hosting these ads but actually making it *easier* for pimps and traffickers to profit off the sale of children for sex and go undetected by law enforcement. When they are actually facilitating this crime. And acting as a co-conspirator.

Over the past several years, victims of online sex trafficking have filed suit against backpage.com (1)*) but have been largely unsuccessful. In each of these lawsuits, children and their families, as well as advocates for survivors of human trafficking, have attempted to hold Backpage accountable for facilitating, promoting, and profiting from online sex trafficking.

Yet each time a lawsuit was filed by one of these children, Backpage lawyers would argue that there is a law — Section 230 of the Communications Decency Act (CDA) — that shields the company from liability. This law, originally drafted in 1996 to protect children from exposure to online pornography, contains a provision that a website that filters content in good faith is not responsible for postings by a third party. This law made sense back then, because the early online bulletin-board companies had no way of knowing who was posting what.

However, since 1996, courts have expanded this protection to include the actual criminal conduct of a website. In *Doe v. Backpage*, several children filed suit against the company, alleging that Backpage was running a criminal operation. The court ruled that even if Backpage had been, in essence, a co-conspirator in this crime, it had to dismiss the case because of Section 230.

Translation: the court found that an Internet company profiting from advertisements of underage girls for sex had no liability or responsibility to those children.

Right now, the United States Senate is considering a bipartisan bill called the Stop Enabling Sex Traffickers Act of 2017 (#SESTA) that would narrowly amend the CDA so that websites such as Backpage, which actively facilitate sex trafficking, can be held responsible for their illegal and abusive conduct. SESTA was crafted exceedingly narrowly to target only those *intentionally* engaged in the crime of trafficking children.

You’d think no one would oppose this effort to protect children. And yet opposition persists from big tech, which has been fighting to make sure no online platform bears responsibility for harm. Google-funded groups have worked quietly to defend and support Backpage for years.

But in November 2017, advocacy groups were successful, and the Internet Association, which represents big tech, finally came out in support of SESTA.

Yet the fight doesn’t end there. Much of Silicon Valley still opposes any amendment to the CDA — which means they don’t want to look bad and publicly oppose SESTA, but they are working behind the scenes to make sure it doesn’t pass.

As a result, the House Judiciary Committee introduced an amendment to a bill (the Allow States and Victims to Fight Online Sex Trafficking Act of 2017, or FOSTA) that provides nothing for victims and survivors of sex trafficking, despite the bill’s name. This happened behind closed doors and without the input of survivors, advocacy groups, or the NGO community. This new bill actually hurts victims’ rights to seek justice. And unsurprisingly, it is backed by big tech.

Holding Backpage accountable could put an end to the free reign of sex traffickers on the Internet. It is vital that the United States Congress pass SESTA into law. SESTA is universally supported by victims, advocates, NGOs, Facebook, the Internet Association, Fortune 500 companies, and law enforcement.

One rogue senator, Ron Wyden of Oregon, has, however, placed a hold on SESTA, and we need to help him and others understand its importance. Wyden has cited faulty arguments that the bill would stifle investigations. As former prosecutors, we can tell you that this is not the case. The only way to fight trafficking on the Internet is by holding these websites responsible and fighting the epidemic of sex trafficking online by making it more difficult for buyers of sex.

**All names have been changed and certain facts altered to protect the identities of the survivors.*

*Alexi Ashe Meyers is co-chair of the New York State Anti-Trafficking Coalition and a staff attorney at Sanctuary for Families. Alexi is a former sex-crimes prosecutor.*

*Rebecca Zipkin is a senior staff attorney at Sanctuary for Families and a former sex-crimes prosecutor.*

1) (some of those cases are chronicled in the powerful film *(http://www.iamjanedoefilm.com/)
2) (http://p2a.co/1LTNEsS)