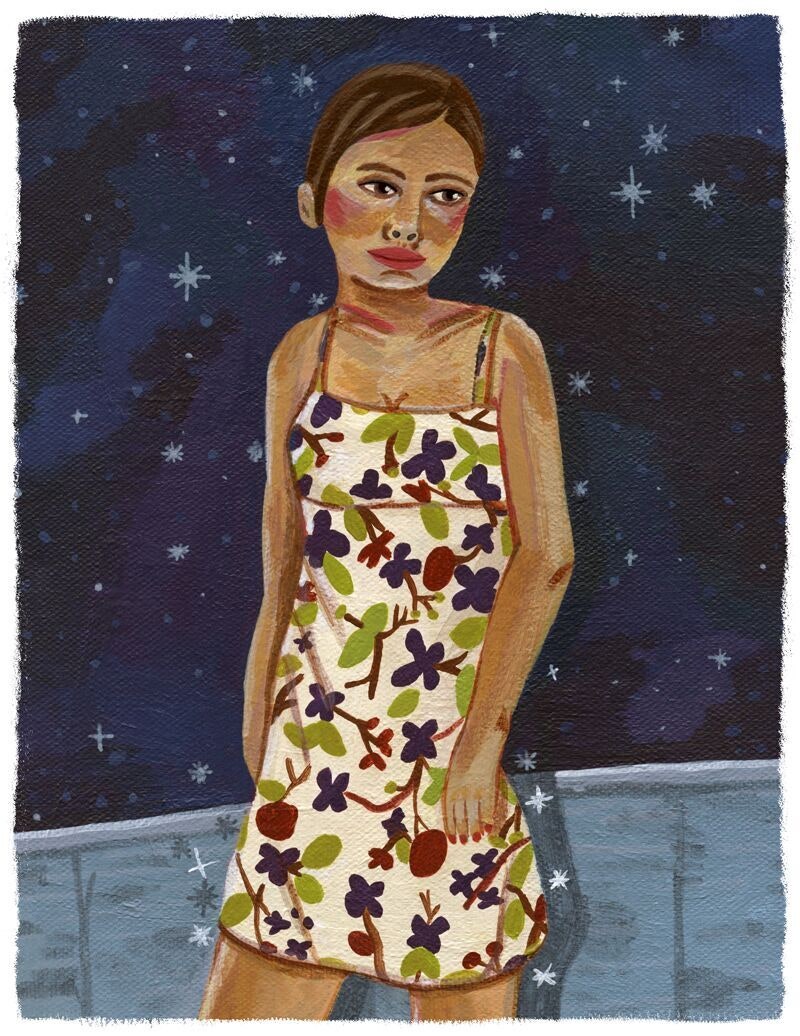 I’ve always joked-but-not-really that I know I am living my best life when I am doing the things that teenage me wanted to do but never got the chance to. For example: seeing the Spice Girls live (they never played in Puerto Rico, but I saw them in my 20s), traveling to Japan and playing a drinking game with a geisha in Kyoto (OK, my teen self never actually wanted this, but trust that if she knew it was an option, she would SO be here for it), or finding a purple and green dress from my all-time-favorite Prada collection from spring 1996, for under $100, and wearing it to my 30th birthday, a full 18 years after it was officially declared “in.”

It retailed for $960, back when I spent most of my time singing about *Walking into spiderwebs* and secretly wishing I could make it the message on our answering machine. But I wasn’t even paying attention to the prices. These clothes, this whole business of fashion was so incredibly out of my reach that it wasn’t even “out of my reach,” it was just an interest I had, the same way I had an interest in outer space, but knew that I would never witness the beauty of the Andromeda Galaxy firsthand.

In any case, sticker shock has never kept me from lusting after a piece of clothing, because I know one day it will be mine. I don’t mean “Wait until it goes on sale,” although sure, that’s a thing you can do. What I mean is, wait years and years, and eventually you will find your dream garment on eBay for a small fraction of its original price. The bonus of shopping like this is that when you finally find what you have been looking for, that one item that just happens to be available in your size — and usually for *verrrrrry* cheap — it feels like a little gift from the world. (There is also no risk of having buyer’s remorse.)

It might seem like a weird way to buy clothes, depending on privileged people to throw out things they don’t have any use for, but that you’re still thinking about two seasons or five seasons or even a decade later. Yet that is usually what I spend the most time on when I am pissing around the Internet. I used to go on eBay every couple of months, and maybe once or twice a year, there was a treasure waiting for me: silver-foil Mary Janes from Marc Jacobs spring 2005 collection, purple and white plaid pumps from Miu Miu spring 2001, a floral-print skirt from Balenciaga’s spring 2004 collection (which I later traded to a friend for a very-sold-out and hard-to-get Christopher Kane dress with a gorilla on the front). These pieces always end up becoming part of my power-dressing outfits, because I assume there is a bit of magic in the fact they made their way to me in the first place.

I love the ephemeral quality of fashion, that clothes exist only for a specific window of time, and that our closets are an active trove of memorabilia from our everyday lives. If I see a woman wearing a jacket from J.W. Anderson’s latest collection, I think, *There’s a woman with great taste and a bit of expendable income* and keep walking, but a woman wearing a horse-print dress from when Stella McCartney was designing for Chloé back in 2001, it’s more of a *Holy shit! Amazing*, and I will want to talk to her because in her look, I see that we have a shared history.

The year I turned 30 was not a very good one. I was mostly unemployed or “freelancing,” depending on my audience. I didn’t shop the entire year, because even spending $24.90 on a top at Zara would have left me unable to eat for a week. But when I found that purple and green vine-print spring ’96 Prada dress — a holy-grail dress if there ever was one — for $59.99, I knew there was just no way I could let it go.

I wore it a few months later when my then-boyfriend took me out to a birthday dinner at the same restaurant where we had had our first date. I was depressed about my job prospects, and our relationship had a looming expiration date that we were both ignoring for the duration of the meal. Later that weekend, we would break up (for the third time) and get back together within the span of a couple of hours, but wearing that dress I felt like at least I was failing while actively following my dreams. In New York!, wearing the 20-year-old Prada dress I had fantasized about for so long.

And the truth is, if you gave me the option to own a new Gucci dress or the red velvet suit that Tom Ford sent down the runway in 1997, I will always, *always*, pick the red velvet suit. Despite the fact that I’ve never met this suit, I have loved this suit, I have a relationship with this suit. When I was figuring out what a woman should be, what me as a woman would look like, I imagined myself in that sharply tailored velvet suit and a baby-blue button-down shirt unbuttoned down to there, attending some sort of business function where an exposed décolletage is not frowned upon. This particular suit won’t be popping up on any resale website for “a couple hundred dollars” anytime soon — it’s one of those iconic looks that will be in a museum in a few years, if it’s not already there. But I know that one day, it too will find its way into my wardrobe. Because me and these clothes, we go way back.