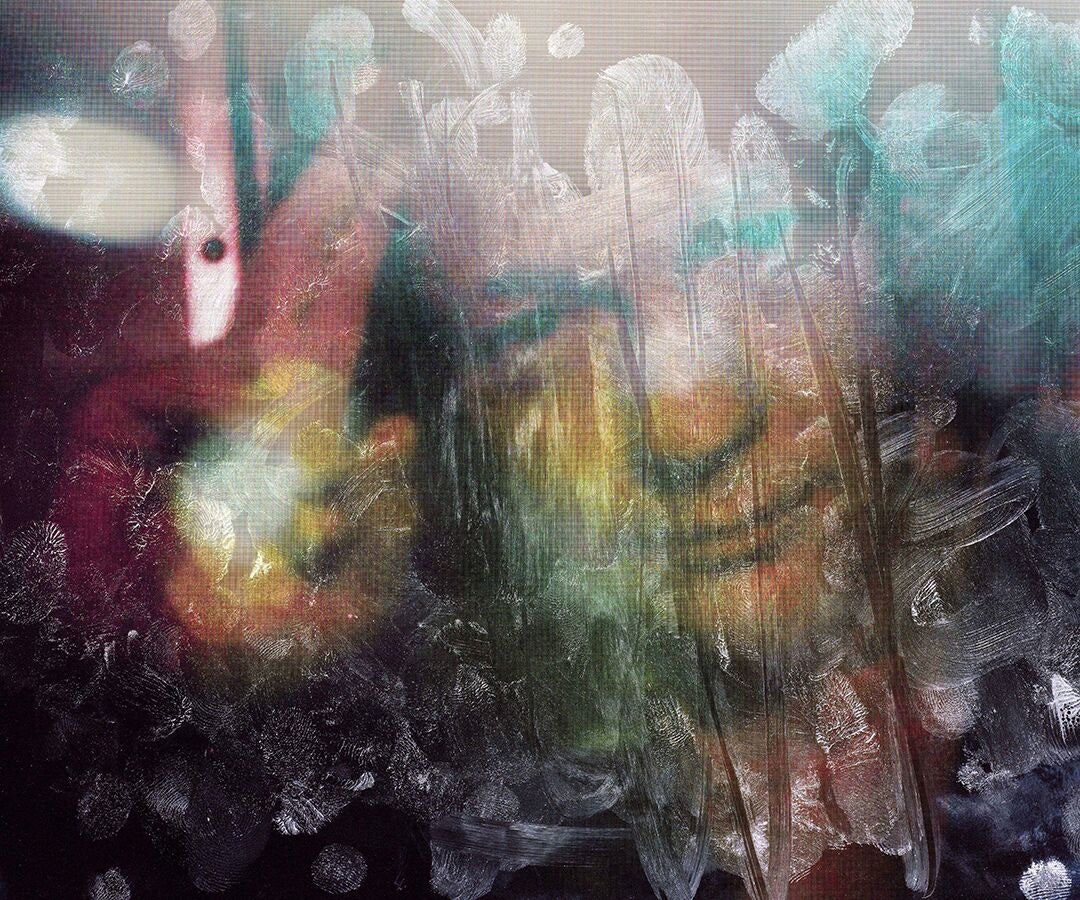 If you came of age in the ’90s, you know (1) as the MTV News anchor with the perfect fire-engine-red bob, delivering the top stories _you_ wanted to hear, in front of a backdrop of planet Earth. What you may not know is that since her departure from the channel, she’s become an exquisite photographer, creating indelible images that truly force you to come closer and delve deeper within. Her work has been shown in solo and group exhibitions in museums and galleries around the country, and her book _Fantasy Life_ will be out next spring from Aperture books with a foreword by Dave Eggers.

I was first attracted to her _Surface Tension_ series. I assumed they were digital collages, and I was enthralled by their texture and a painterly quality I couldn’t quite place. During our conversation, I found out they were actual photographs of an iPad — the painterly quality due to the trace of finger grease we leave while browsing and swiping — and I was genuinely surprised that something so beautiful could come from something so banal. For the rest of our phone conversation, we talked about starting second careers late in life, why no place is too small when you’re trying to get yourself out there, and the joy of finding beauty in unexpected places.

**Laia Garcia:** How did your interest in photography start?

**Tabitha Soren:** I had been working in television since my 18th birthday; I started in New York when I was very young. After I had covered a couple of political campaigns, I got burned out, and in 1997 I accepted a yearlong fellowship at Stanford. It’s called a Knight Fellowship, and basically they pay you your salary to go to school for a year, which is pretty great. Theoretically, you’re supposed to dive into a particular subject very, very deeply because, of course, the wonderful thing about journalism is that you’re paid to learn about new things all the time, but you learn about it on a very superficial level because things move so fast. The Knight Fellowship is supposed to be an antidote to that. While I was there I fell in love with photography and art history and spent most of my time in that department instead of where I was supposed to be.

**LG:** Did you have a relationship with art before that?

**TS:** Well, I would not call them art by any stretch of the imagination, but I’ve always taken pictures because I come from a military family and I chronicled where I lived, what my room was like. I have oodles of images that provide memory for me because, otherwise, I don’t know that I would’ve been able to keep track of all the places I lived and the communities I was part of. Obviously, scrapbooks and things like that provide that service to everyone, but for me, because I was moving around every couple of years, they were even more essential.

**LG:** What inspired you at Stanford?

**TS:** I was inspired by all the photographers they were showing me, like Richard Misrach and Bob Dawson, but I was also moved by the feeling I had while I was doing the assignments for my classes. Time just evaporated. I would go in the darkroom and have no idea how much time I had spent in there. Television was very results-oriented. It was super-exciting to do an interview with Yassir Arafat and cut it together and edit it, then see it on the air, but the process was quite arduous. Photography provided me a process that was totally enjoyable.

**LG:** How did you transition from TV to photography?

**TS:** It wasn’t that clear-cut. I didn’t expect to stop doing television. I also didn’t expect that I could manage any sort of art career; it wasn’t something that I was strategizing about. It just wasn’t quite that black and white, that’s all. I didn’t have that kind of confidence that I could turn my images into a fine-art career.

When my children were older, I had more time to concentrate on something else that I loved. I have three children, and it was clear to me that existing within only the domestic space was not going to make me happy. I couldn’t be a journalist again and have three children. Being completely away from home, racing around the country on different planes and chasing stories that are breaking news would force me to be away too much, but my art career was much more flexible.

When you love something you don’t keep track of how much time you’re spending doing it, and things are just evolving. At first I entered every nonprofit group show; nothing was too small. A bar, a café, a nonprofit gallery, an art fair, just whatever I could do to get the work out there and also trying to keep the expenses in check. I was in a show in New York, and that led to somebody buying a bunch of the pictures, and then once you have clients, galleries want to represent you. It wasn’t something that I could necessarily muscle my way into, but I did try to open myself up for both rejection and success.

It was a little awkward because of my age. Everyone else doing the thing that I was doing was probably just out of grad school, but I think that it’s becoming more and more normal for Americans to have more than one career.

**LG:** Once you sold your first piece, did you get more ambitious with your concepts?

**TS:** Yes, definitely. All successful people feel fraudulent; at least the smart ones do. You could easily have an art career that’s just a vanity project, considering yourself an artist, and yet no one is seeing it, no one is buying it. That was something I was keenly aware of because the difference in audience from my second career compared to my first career is immense. There were 80 million people watching me on the Video Music Awards, but it would be ridiculous if I was hosting them at my age now. I feel like my transition has been pretty graceful. I kept my head down and didn’t dine out on my past success in journalism. But I do realize that I couldn’t be taking the pictures that I’m taking without the education that I got through producing and directing work in television.

**LG:** I feel like people identify photography with being something instant and capturing something and just being right in the moment. But looking at your work, one thing that really struck me is that a lot of it is about time and the passage of time, and you come back to subjects. Can you tell me more about that?

**TS:** I think that my projects actually look very different, each one, so it’s interesting to me that you would see a continuity of time because I think that’s very subtle, but I totally agree with you.

The other thing that’s very prominent, or the other thing that pulls them together at least in my mind, is that I’m trying to speak to the twists of fate in life that can unhinge us. _Panic Beach_ is about panic attacks, _Fantasy Life_ is about what it looks like to try to touch greatness, _Running_ is about the psychological state in the fight-or-flight response. In _Surface Tension,_ I’m foregrounding the anxiety we all feel as we struggle to adapt to all this technology and how it’s dominating our lives. There are these instances in life where things go one way or another, and I’m trying to see, trying to explore how we respond to those moments of decision, or terror, or panic. The connective tissue with all of the projects that I’ve worked on so far is the internal weather that storms through all of us.

_Laia Garcia is the deputy editor at Lenny._